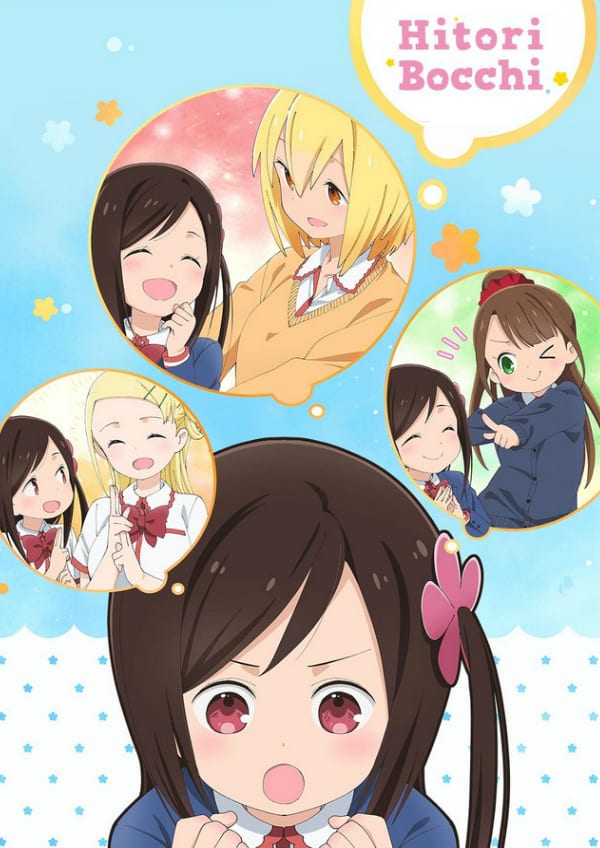 Bocchi Hitori made a deal with her best and only friend. While they are attending different middle schools, Bocchi must befriend everyone in her class. For many, this would be a challenging but doable task. For Bocchi, though, she would have an easier time flying to the moon. 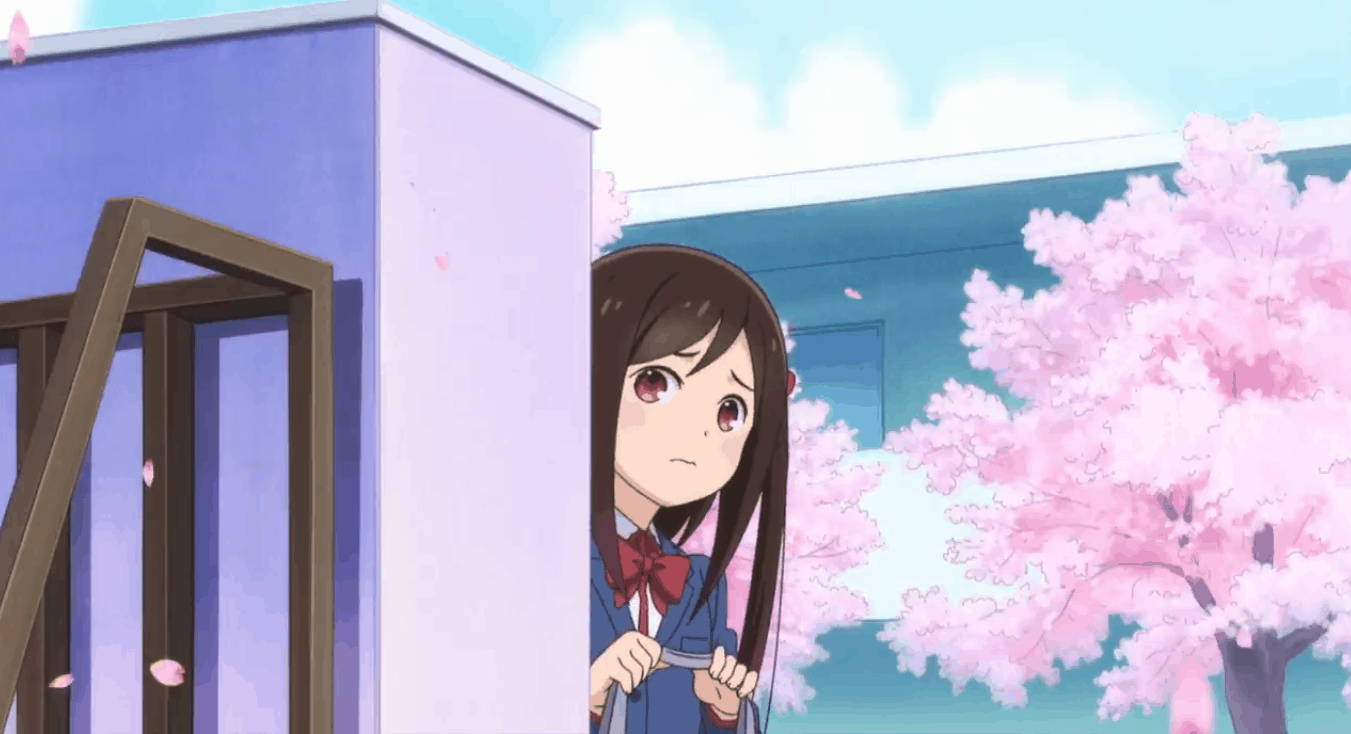 If you were to look up the definition of a standard slice-of-life anime, you would most likely find Hitori Bocchi’s ??  Lifestyle (Hitori Bocchi) featured prominently. Whether that’s a good or bad thing, I’ll leave to your personal tastes.

As such, if you are not a fan of this sort of show, then please consider this. I doubt there is anything I can say that will convince you to give this series a shot. Nevertheless, I’m still going to encourage you to try and watch it regardless since it was very well-done.

And if you are a fan of slice-of-life anime, then I think it is incredibly likely you will find Hitori Bocchi to be quite enjoyable. 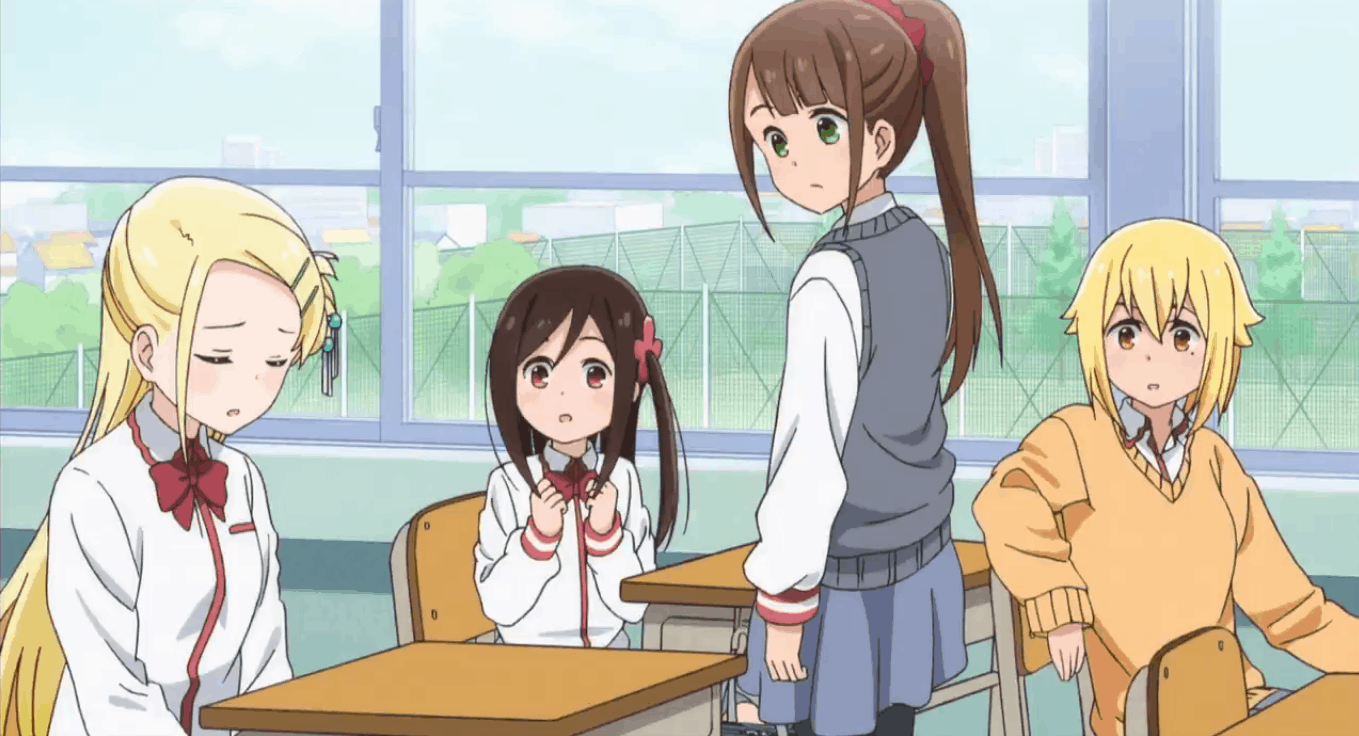 No matter your thoughts on this genre, though, we need to be honest.

Hitori Bocchi wasn’t brilliant. It wasn’t earth-shattering. Hell, it wasn’t even that impressive when it was all said and done. This series simply did its thing. Fortunately, its thing worked. But to put this as bluntly, and as positively, as I can, that was the only goal this show needed to accomplish.

In its own way, Hitori Bocchi was cute, relaxing, and to use a super unhelpful word, charming. I can’t pretend this show had me in a constant state of laughter. However, and this is crucial, I never found myself fidgeting from boredom. 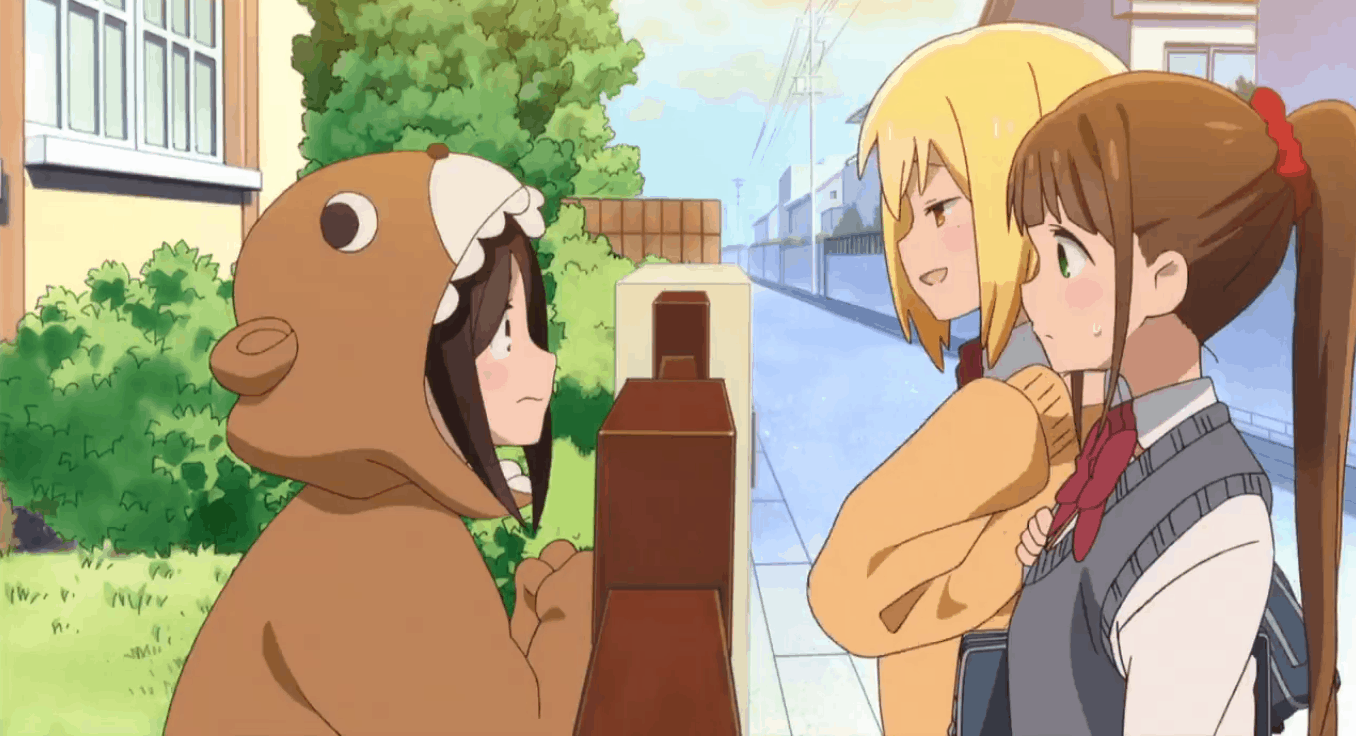 This series’ strength – like other slice-of-life anime worth talking about – came from its characters. To be more specific, Hitori Bocchi’s lifeblood was Nako Suano, Aru Honsho, and Sotca Lukythaz.

Nako was someone people quickly misjudged. Through a combination of her hard facial expressions and intimidating looks, she would, unintentionally, instill a considerable amount of fear in others. Remember, in Japan, whether well-founded or not, Japanese people with blond hair are seen as delinquents. In contrast to that stigma, Nako was always willing to help and lend a kind ear.

Aru was constantly trying to maintain a perfect-girl image. This was difficult seeing how she was often the victim of random unfortunateness. It didn’t matter if it was wearing indoor shoes home, accidentally putting on the wrong uniform, or running into every pole, door, or low hanging branch there is. If some annoying inconvenience was going to happen, it was going to happen to Aru. Despite those difficulties, she was still seen in an infallible light except to a select few.

Sotca was a pretty foreign girl, and thus, many mistakenly thought she was impossible to approach. For those who did, they soon realized she was a lovable, hyper-energetic airhead. She was the first to start laughing and the first to jump headlong into anything new. To Sotca, because there was something to do was reason enough to do it, even if misguided. 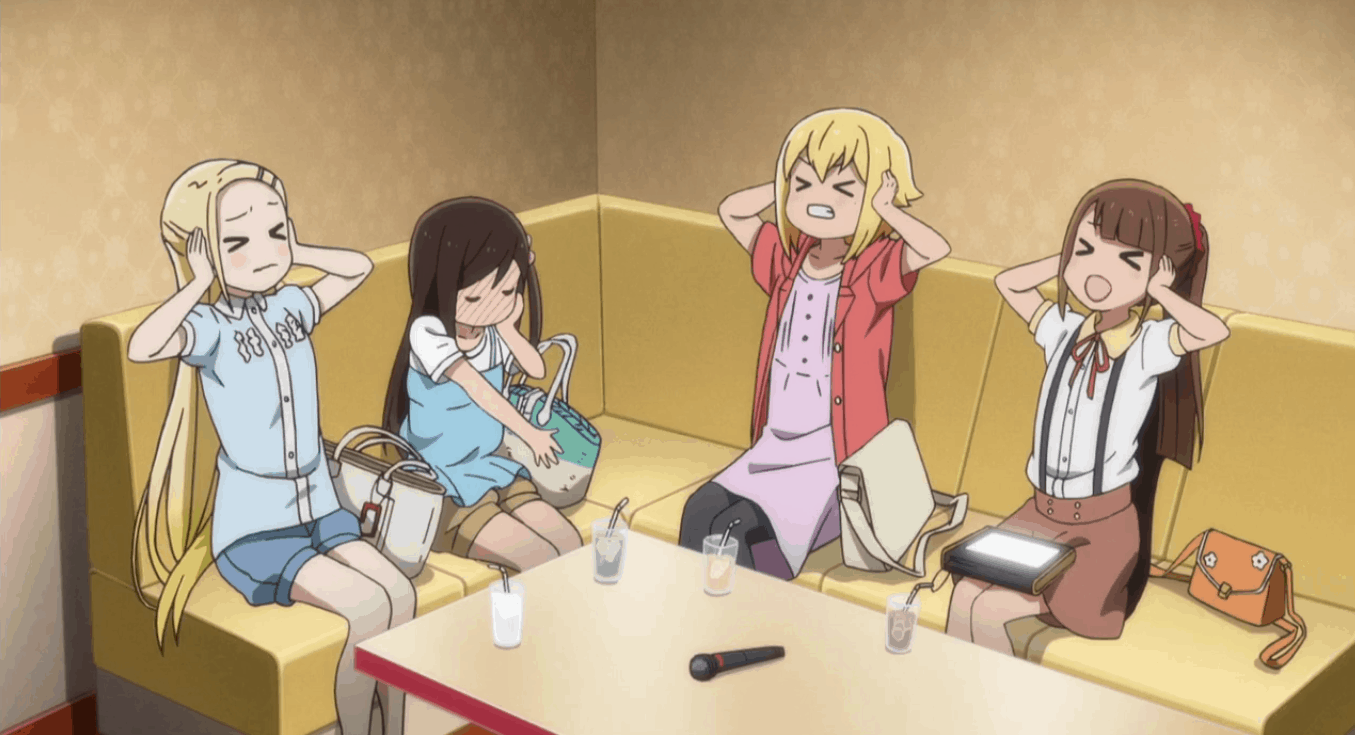 I will add, although these three were fine on their own, they shone their brightest when they were playing off each other. The way they bantered and bickered with one another was a ton of fun; culminating into the friendly rivalry between Nako and Aru.

When I saw them together, it was as if I was watching the foundations of a lifelong friendship be built.

Now, hopefully, you’ve noticed I’ve yet to talk about someone. Sure, Nako, Aru, and Sotca may have been something, but what of main character Bocchi. You know; the person whose name is in the title.

Well, she was a bit tricky. 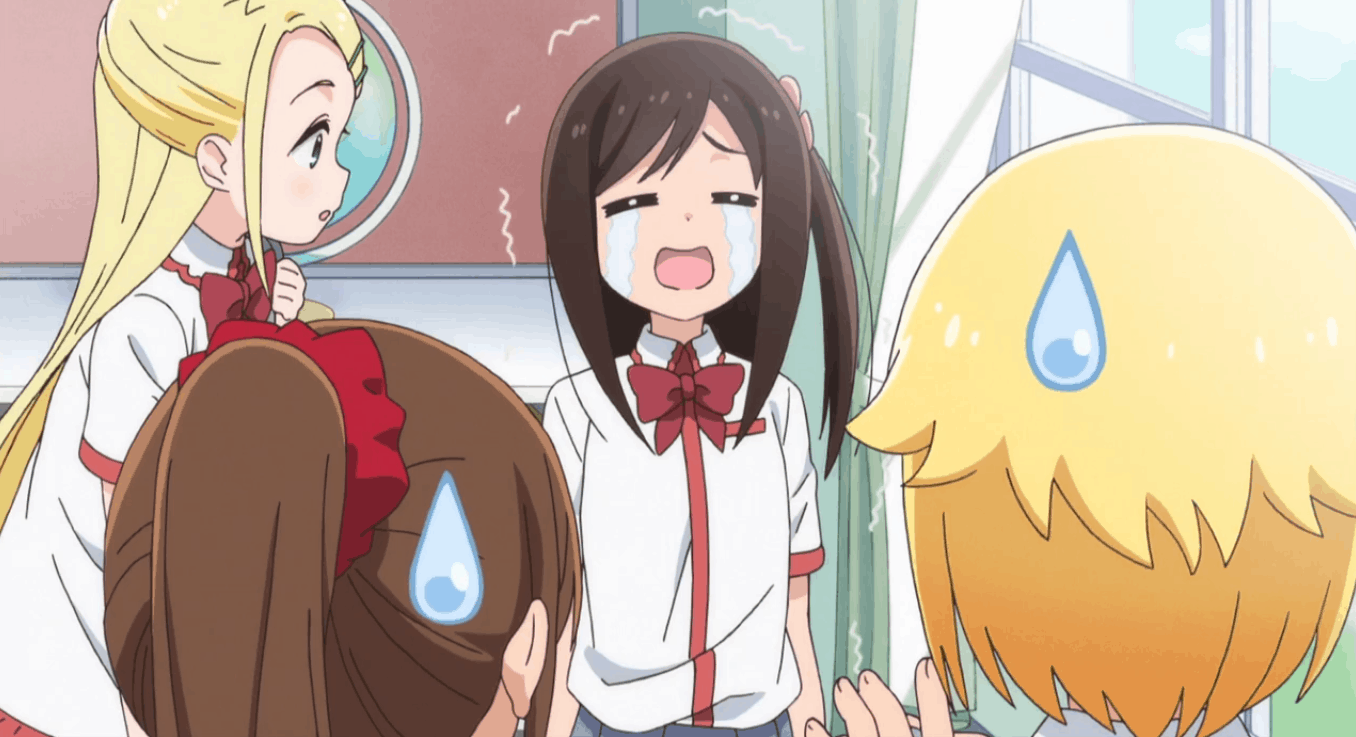 On the one hand, Bocchi was adorable. She had plenty of quirks that were good for the frequent chuckle, and she was genuinely trying to better herself.

On the other hand, my god she was a lot to deal with. You want to root for Bocchi and be on her side, but she was always one missed text message away from a full anxiety attack. Bocchi was the central figure in this show because everyone had to do whatever they could to ensure she was able to function if even one thing went wrong. And keep in mind, poor Nako, Aru, and Sotca had their insecurities to worry about.

While it may sound like Bocchi was a drag on this series, that was not the case. As this story progressed, Bocchi grew to be more self-assured and confident. You could say she was tough to handle, but I would also say that was the point. 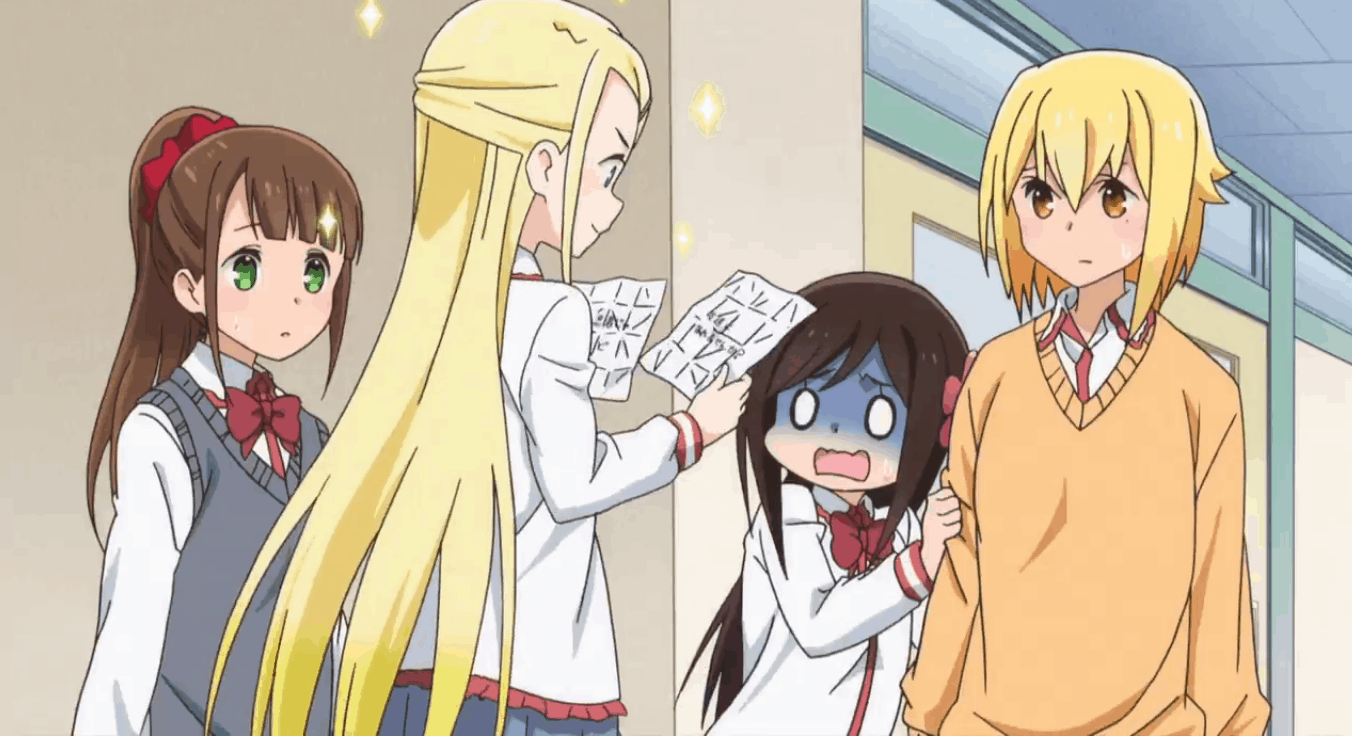 I’m sorry, but I need to take this moment to vent.

I hate characters like Bocchi and Nako’s teacher, Teruyo Oshie. As a consequence of Nako’s previously mentioned intimidating personality, Teruyo was always petrified to interact with Nako. Something about an instructor being unfairly afraid to interact with one of their students irks me greatly. This was especially the case in this show because poor Nako did nothing to deserve Teruyo’s hesitation.

As to not be accused of ignoring this point, Teruyo was aware she shouldn’t be scared of any of her pupils. Try as she might, though, Teruyo could never get past Nako’s appearance.

Some may claim this was Hitori Bocchi’s attempt at comedy; I would argue it was BS. 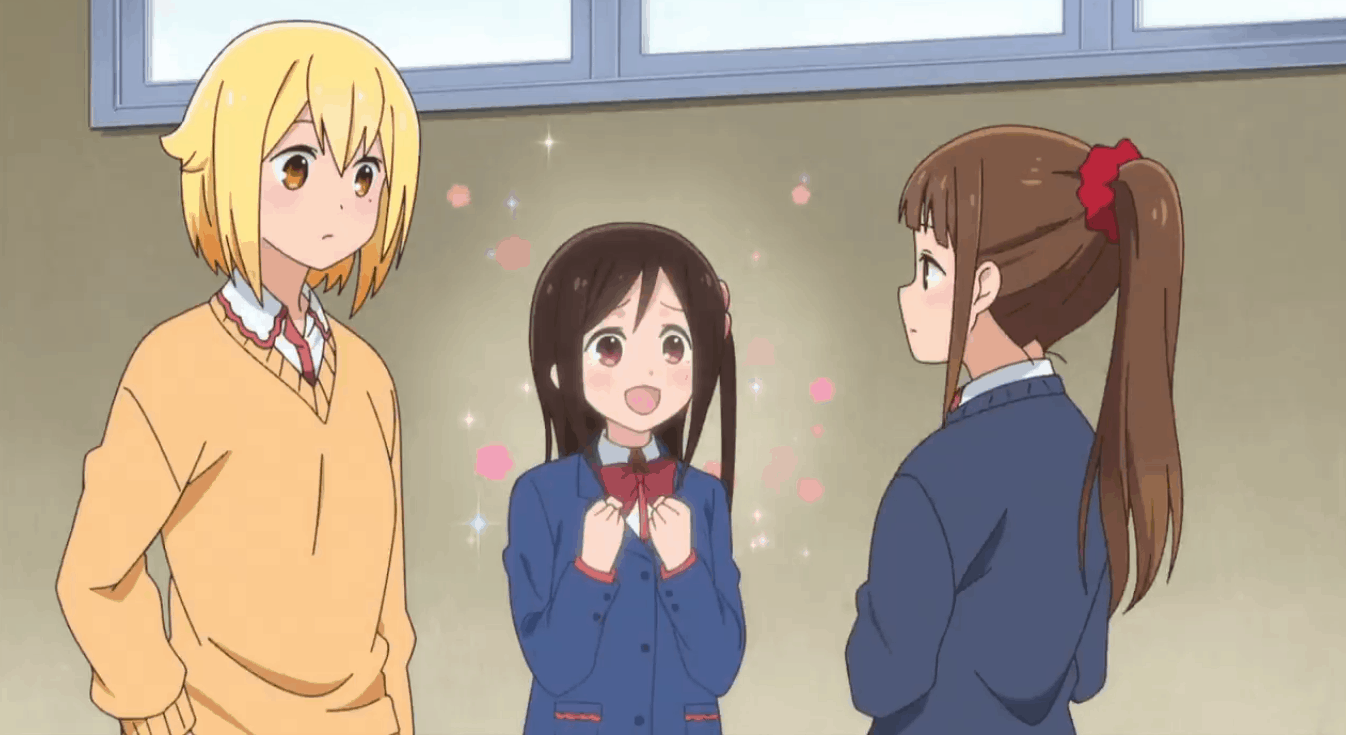 Again, apologies for the tiny tirade, but stuff like that really bothers me.

Did this ruin my enjoyment of this show? As it was happening it irritated me, yes, but luckily it was only one small section of an otherwise enjoyable series.

With that said, were there any other overarching negatives to Hitori Bocchi?

Well, I suppose I already said what they were, didn’t I? 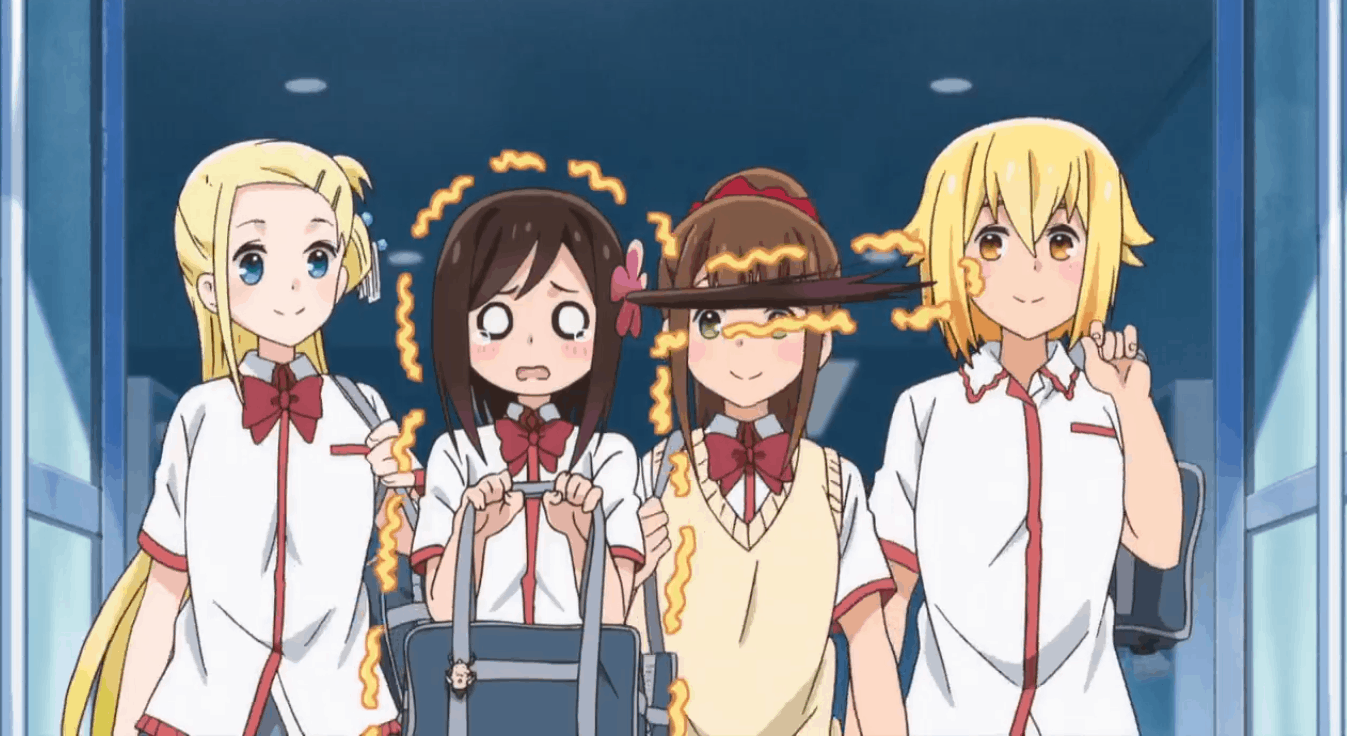 This was your typical, no-thrills slice-of-life anime. If this is your entry into this genre, then you picked a pretty decent place to start. However, if you’ve seen any other series of this type, then there is not much new you can get out of this show.

Still, if you’re like me, there is a reason you like slice-of-life stories. Whatever that reason maybe, I’m sure Hitori Bocchi will satisfy it. 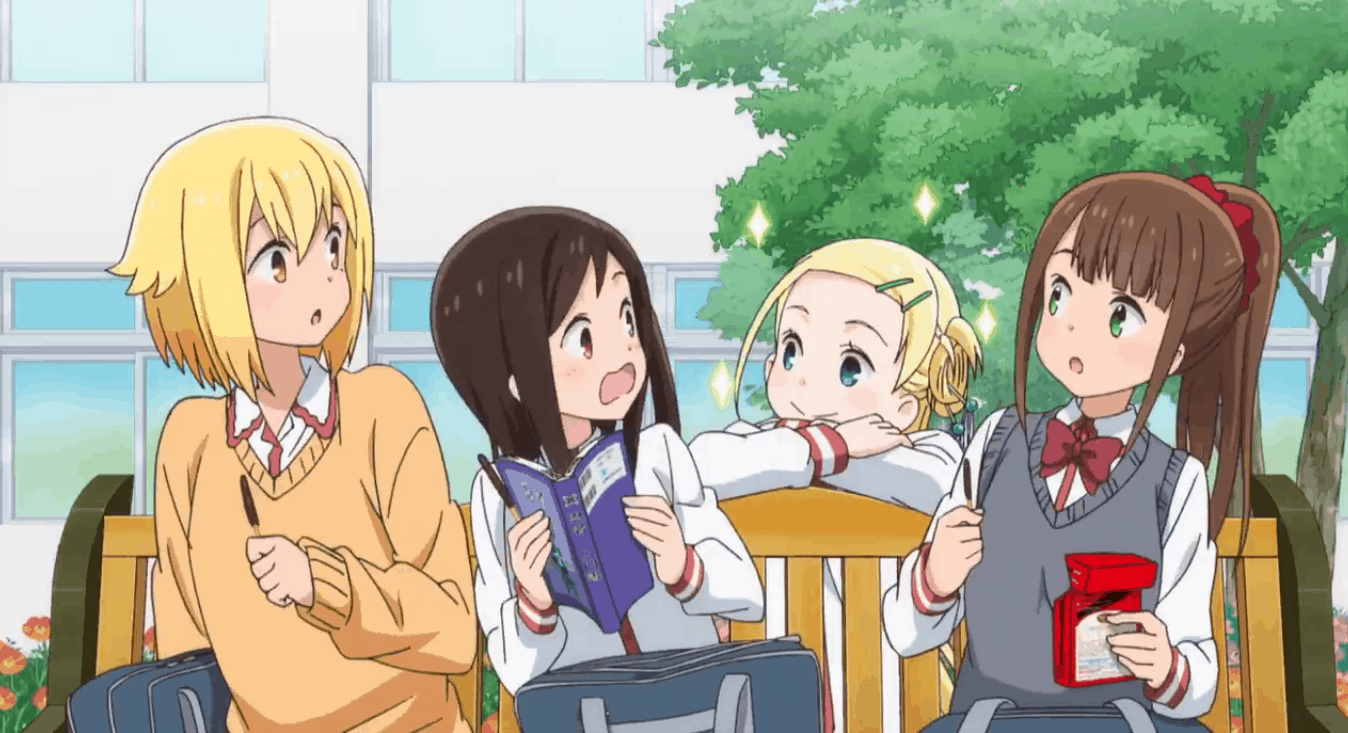 This series was fun, cute, often funny, occasionally hilarious, and an all-around good time. It had many great characters that could work well alone as well as together. Speaking for myself, I really enjoyed watching this one.