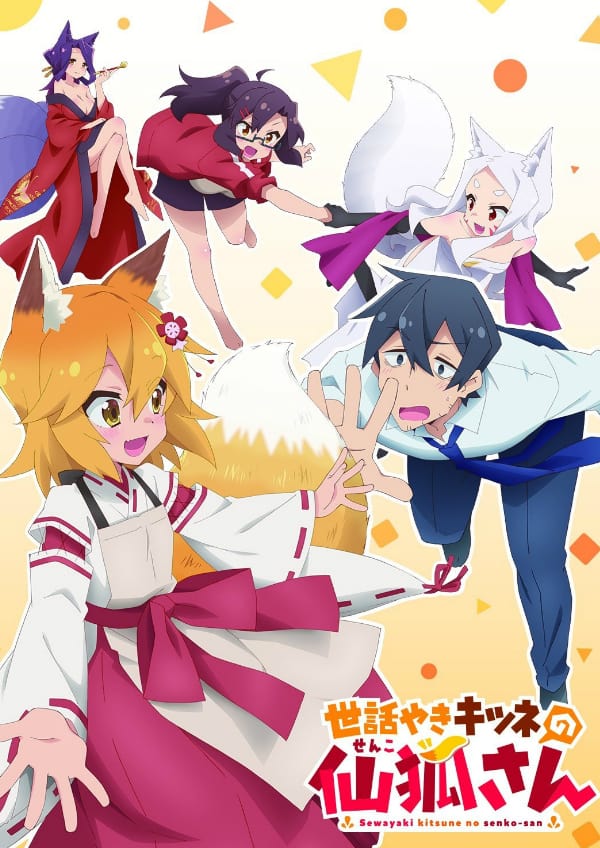 Kuroto Nakano cannot remember when he didn’t come home on the last train. Kuroto’s job has him working tirelessly with no overtime pay, few holidays, and even fewer opportunities for some much-needed rest and relaxation.

The stress of this everyday slog is slowly eating away at Kuroto, and if nothing changes soon, the exhaustion will destroy him.

Then to his shock, Kuroto returns from work with his apartment smelling like a delicious homecooked meal. On top of that, waiting to greet him and treat is a mysterious fox-demon named Senko. 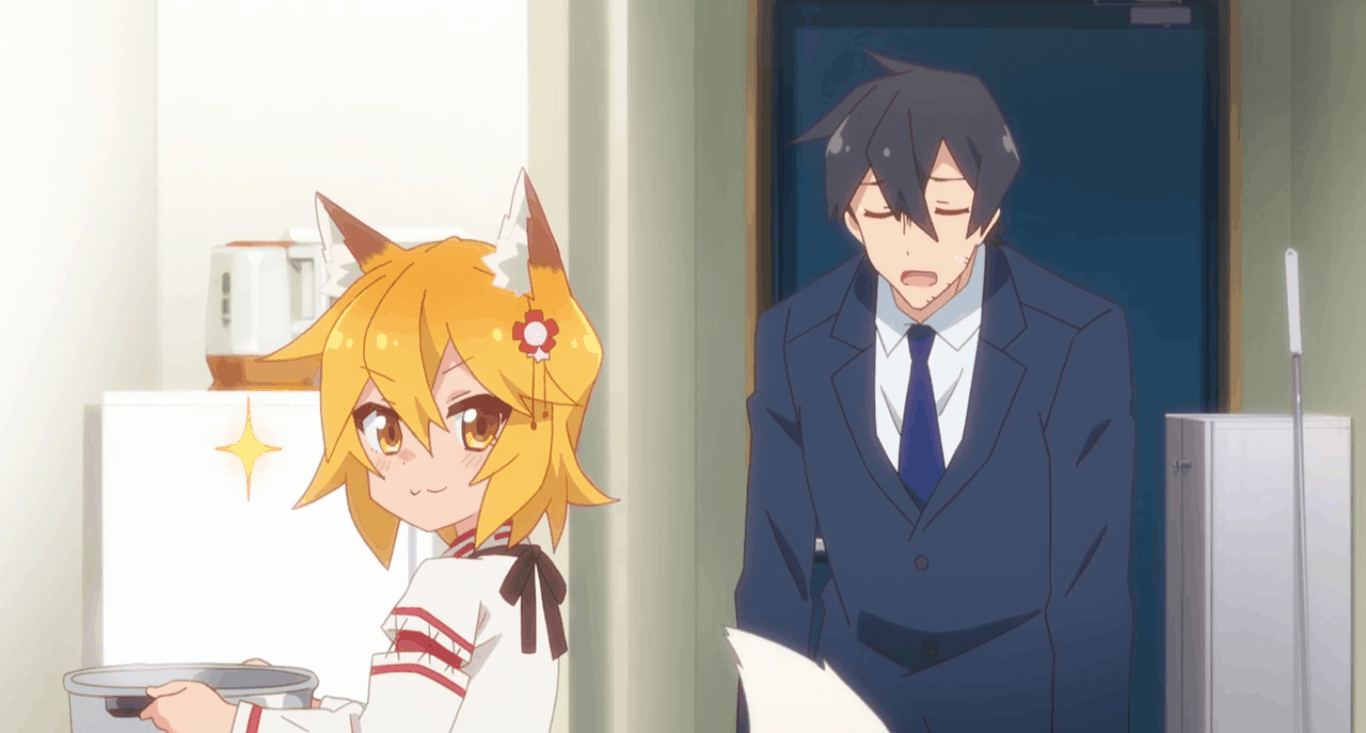 Well, this was pleasant.

First, I want to say Sewayaki Kitsune no Senko-san (Senko-san) wasn’t what I would call funny. Some parts gave me a chuckle, but nothing about this series was particularly laugh-out-loud hilarious. While on the surface that might sound like a problem, know that humor wasn’t what made this show strong.

Senko-san was, more than anything, charming as can be. 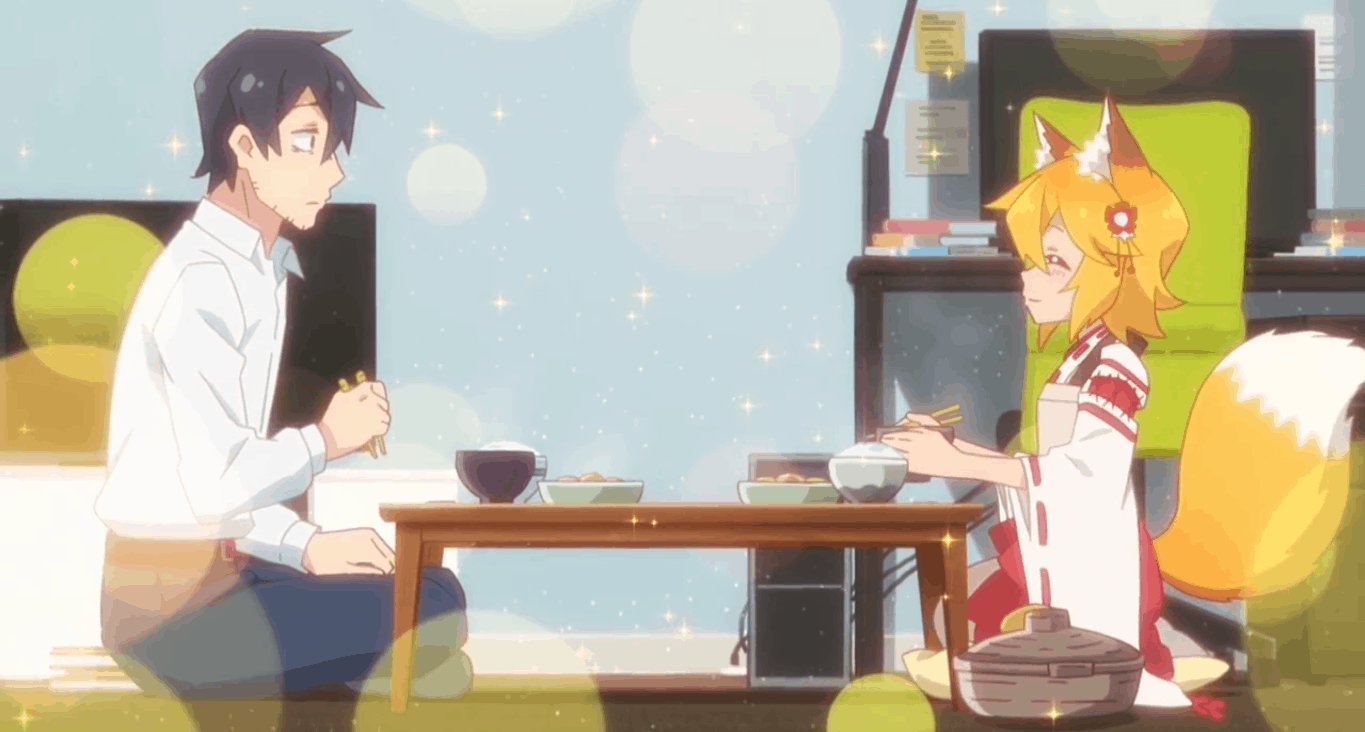 If you’re expecting fast-paced, hyper-energetic slapstick comedy from this show, it’s best to put that thought to rest now. Senko-san was a much slower series than most, and when we pause for a moment, that makes a lot of sense.

Take into consideration the point of this show. Or, more specifically, account for the initial relationship between main characters Senko and Kuroto Nakano. Senko came into Kuroto’s life because Kuroto was overburden with a stressful job, a poor diet, and zero self-care. Senko’s role was to help alleviate his exhaustion.

Therefore, when someone just needs a good night sleep, why would an onslaught of wacky hijinks solve anything? Suddenly, the goal of any show that would do that would become crystal clear. Everything would merely be an excuse to have a cute fox-girl running around doing cute fox-girl things.

That was not Senko-san. 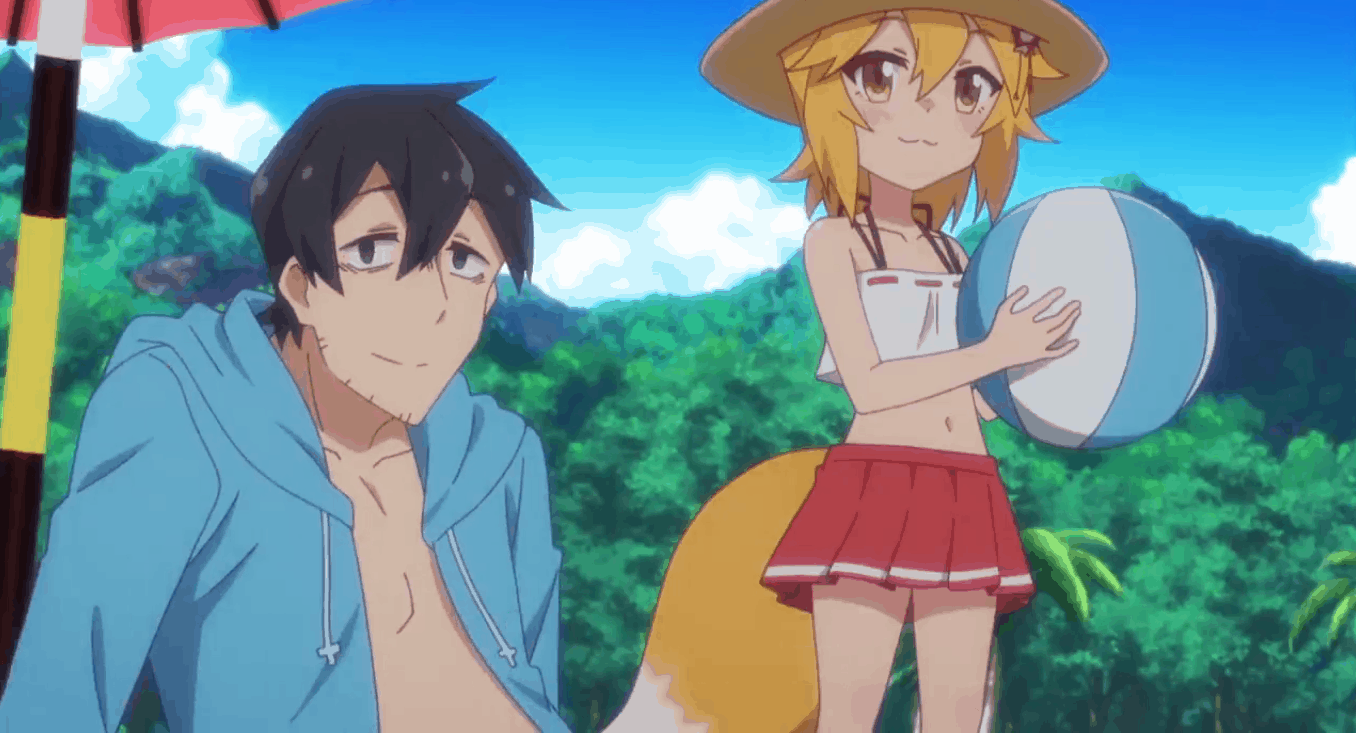 Although this series wasn’t afraid of throwing in the occasional over-the-top reaction, its preference was to be far more subtle. To that respect – and fittingly enough – it made watching this show quite relaxing.

So, how did Senko-san pull this off?

To put it simply, this series nailed its two lead characters.

First, Kuroto was made to look broken, defeated, and low. He was overworked, was given hardly any time off, and his superiors constantly berated him despite being the person who was holding the company together. But do you know what Kuroto wasn’t? He wasn’t a pathetic creep. He was an actual human being who was struggling. 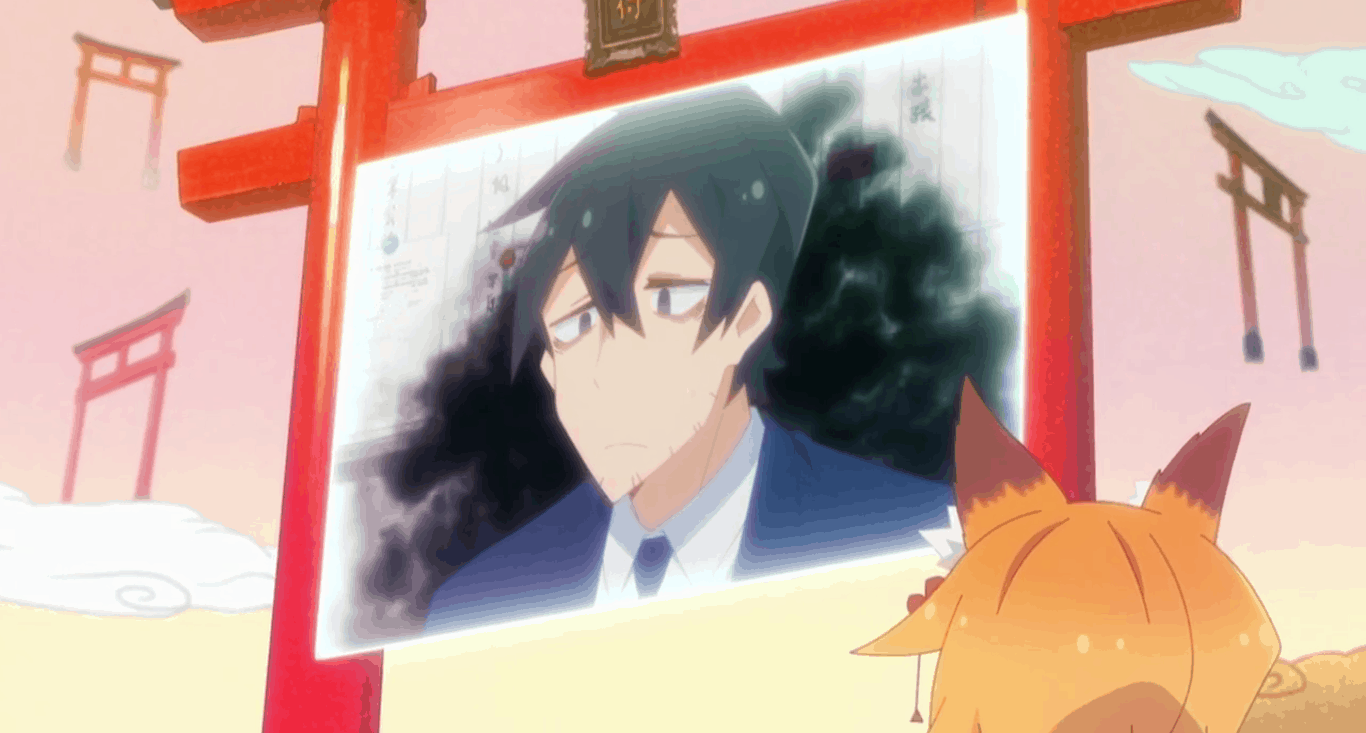 Never once in this show did Kuroto come off as unreasonable. He wasn’t incapable of taking care of himself, and he wasn’t incompetent with basic tasks people need to do to live a daily existence. The issue he faced was having to work a job that exploited his skills.

Having lived in Japan myself, I can’t tell you how many horror stories I’ve heard. An untold number of overextended employees having to do unpaid overtime, miss the last train home, sleep at the office, and be thankful for just a single day off. Sadly, that latter point could still be taken away if a project had to get done.

Kuroto was someone you could sympathize with.

In fact, one of the best scenes of the series was when Kuroto finally showed how much pressure he was under. Throughout most of Senko-san, Kuroto managed to put on a brave but tired smile and power through. Then there came a point where he couldn’t.

It really is amazing. In a show that was adorable and sweet, there was still a moment that could strike right at a person’s core. 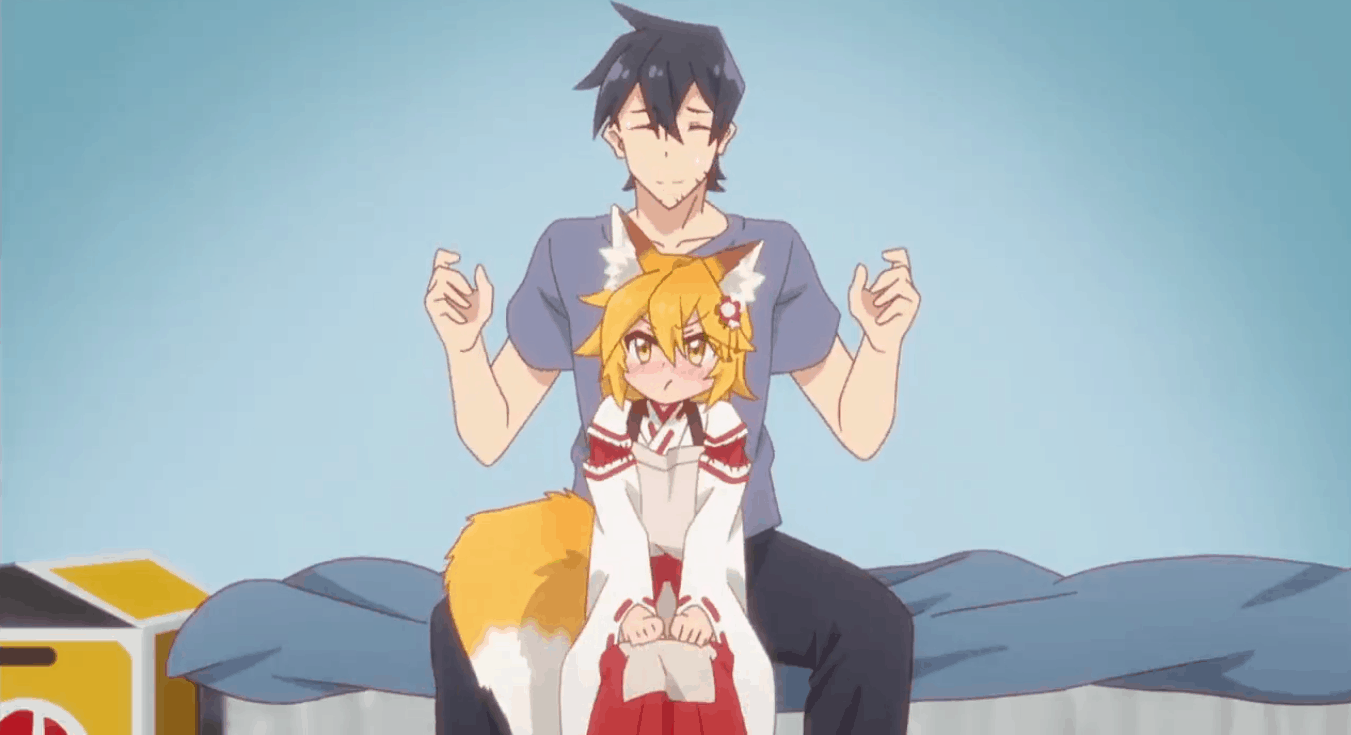 Secondly – because remember, we were just talking about Kuroto – the titular Senko was fantastic. As I said earlier, she had the complete cute fox-girl look down. That could have easily been her entire personality. Fortunately, this series chose to do much, much more with her.

I have lost count of how many centuries-old characters have had the demeanor and characteristics of a young child. Hell, even Senko-san had such a person with Senko’s fellow fox-demon Shiro. However, with Senko, things were different.

She may have looked childish in appearance and in size, but don’t be mistaken. Senko was someone who had lived for a long, long time. The way she talked, the way she acted, and the way she consoled Kuroto were tell-tale signs of someone who had gone through so much back in their own day. 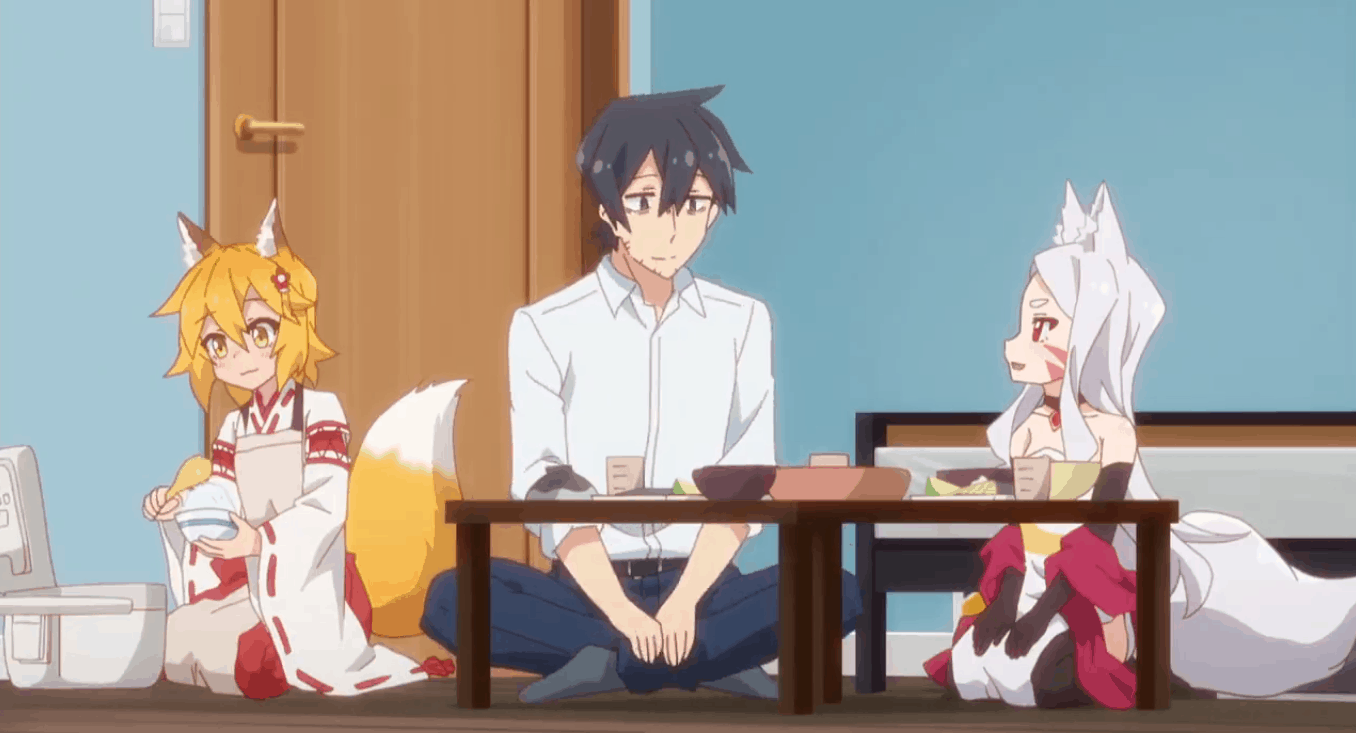 I could actually believe Senko was over eight-hundred-years-old; that, and she was also a fox. There were several amusing moments when Senko’s animalistic tendencies came out.

This series was great because Senko and Kuroto complimented each other phenomenally well. Senko would push for Kuroto to rest as much as possible, but she came to understand that was sometimes not an option. Kuroto was occasionally insistent Senko didn’t need to do as much as she was doing. But eventually, he came to realize she indeed had his best interest at heart.

Then, as this series was wrapping up, I couldn’t help appreciating how immensely satisfying Senko-san was to watch. 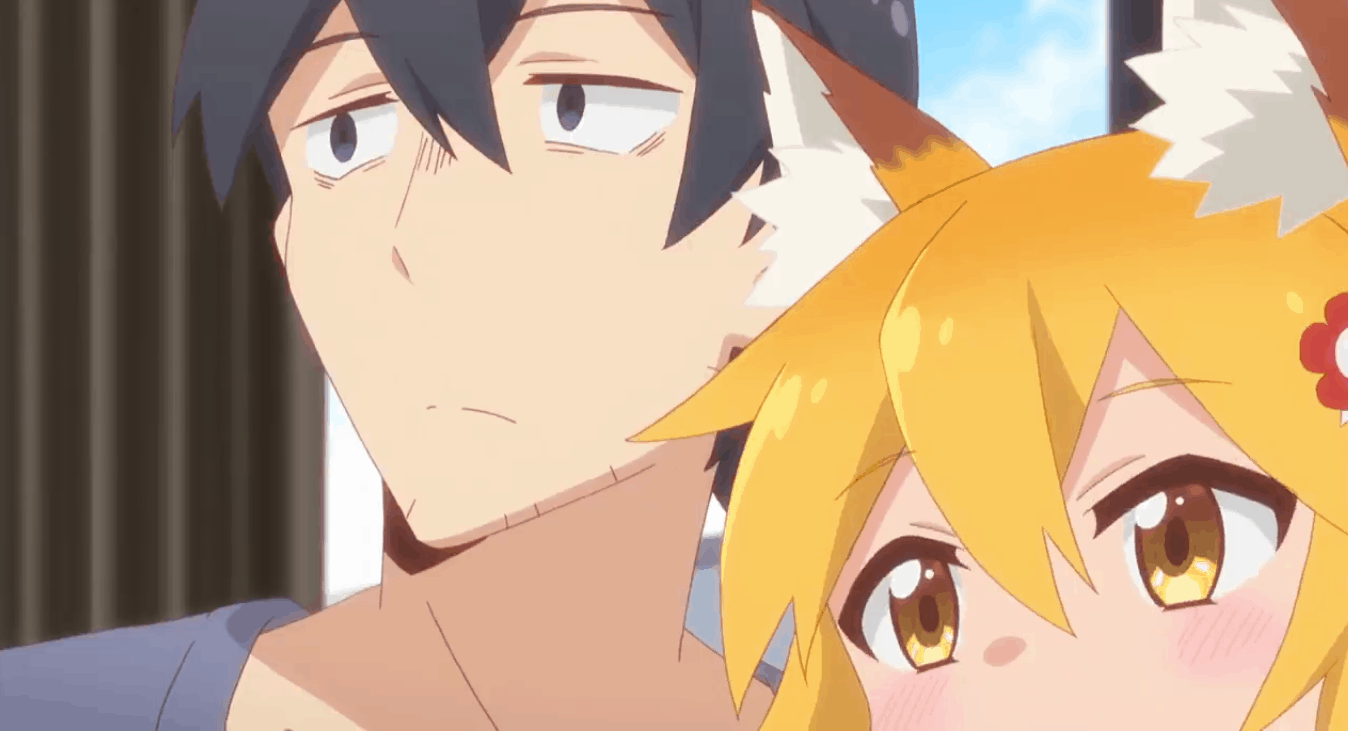 There was one element to Senko-san that never sat well with me. At first, I thought this would only serve as an isolated joke. To my chagrin, it ended up becoming a reoccurring plot point.

Kuroto was obsessed, and I mean obsessed with Senko’s tail.

I can understand it if that wasn’t what you thought I was going to say. 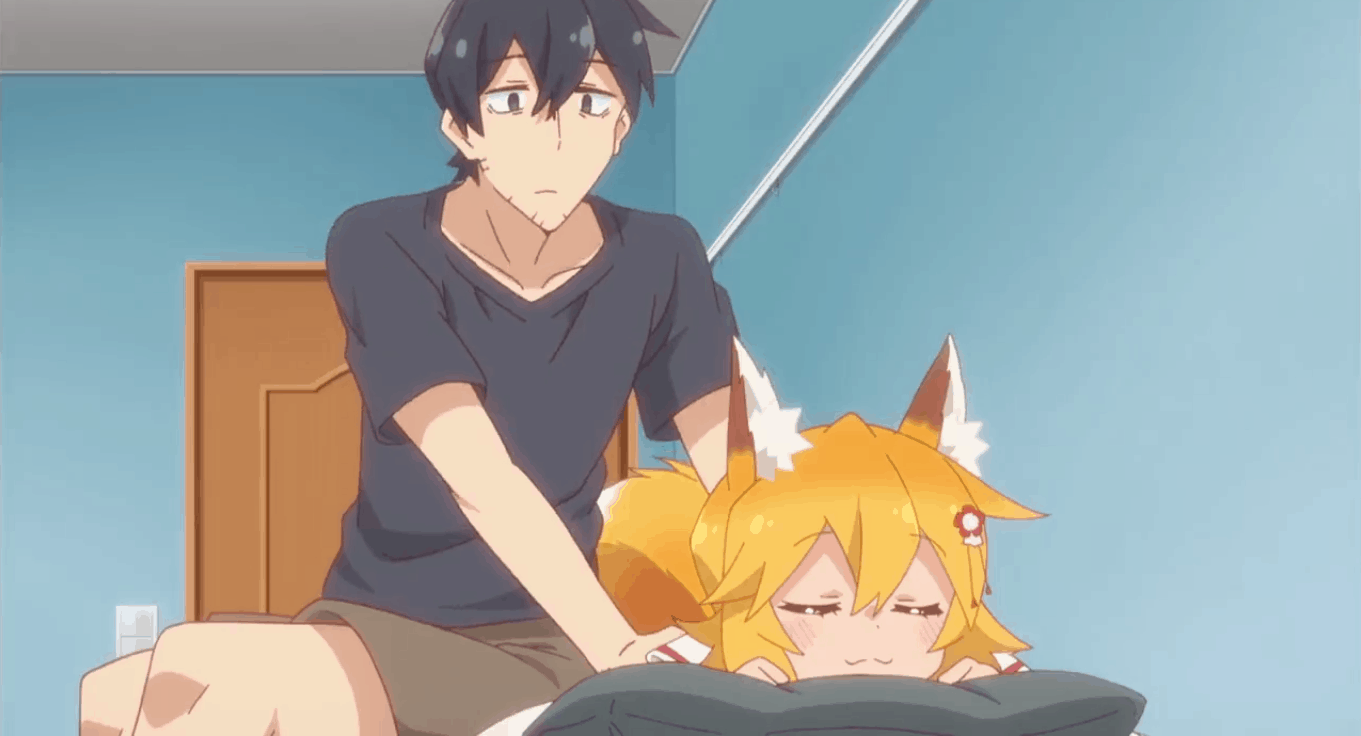 To start, I get it. Kuroto was someone who liked fluffy things. Nothing wrong with that. However, there is a fine line between liking floof-balls and getting what I can only guess is a sexual thrill from them.

No, never once did Senko-san come out and admit that was what was going on. Also, it is possible years of watching anime have conditioned my brain to turn in such a direction. But then again, this show didn’t help matters. 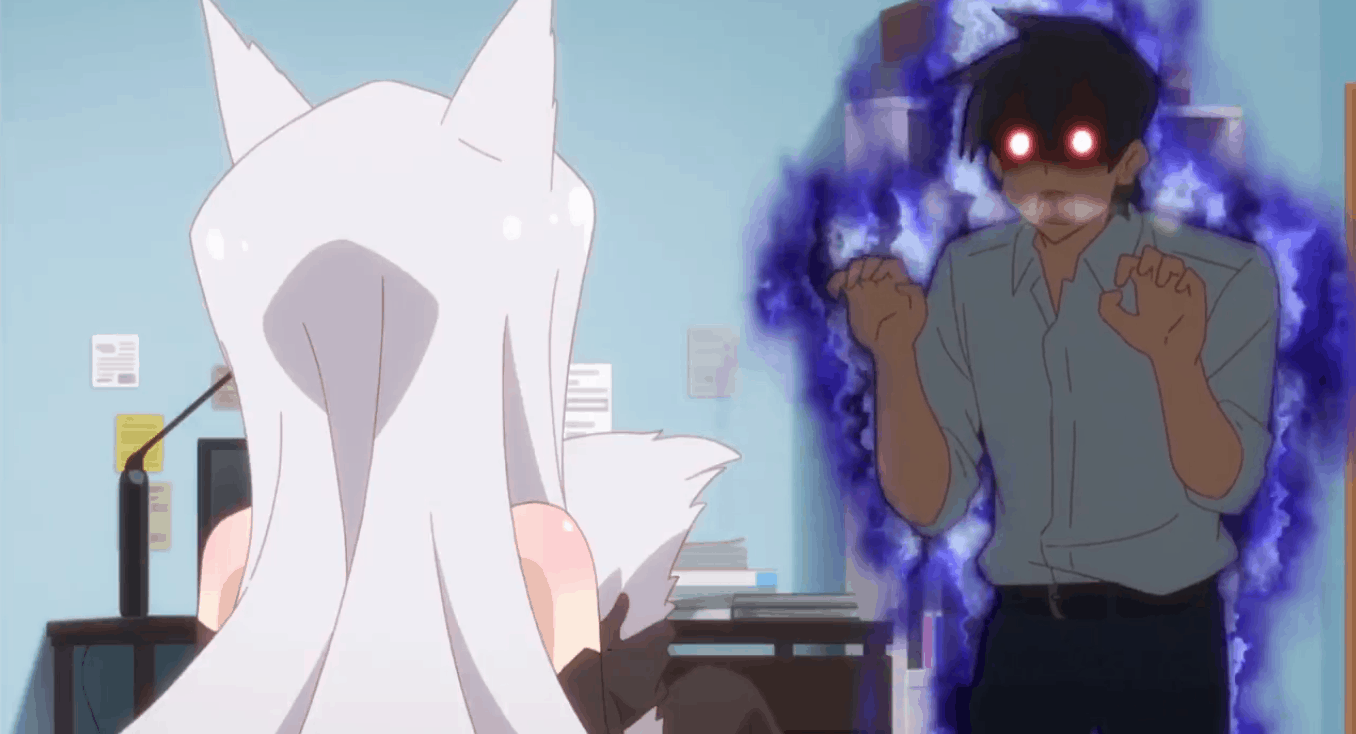 This is why I said what I said:

This was persistent, and the implications – assuming they were intentional – felt extremely out of place in this otherwise laidback series. 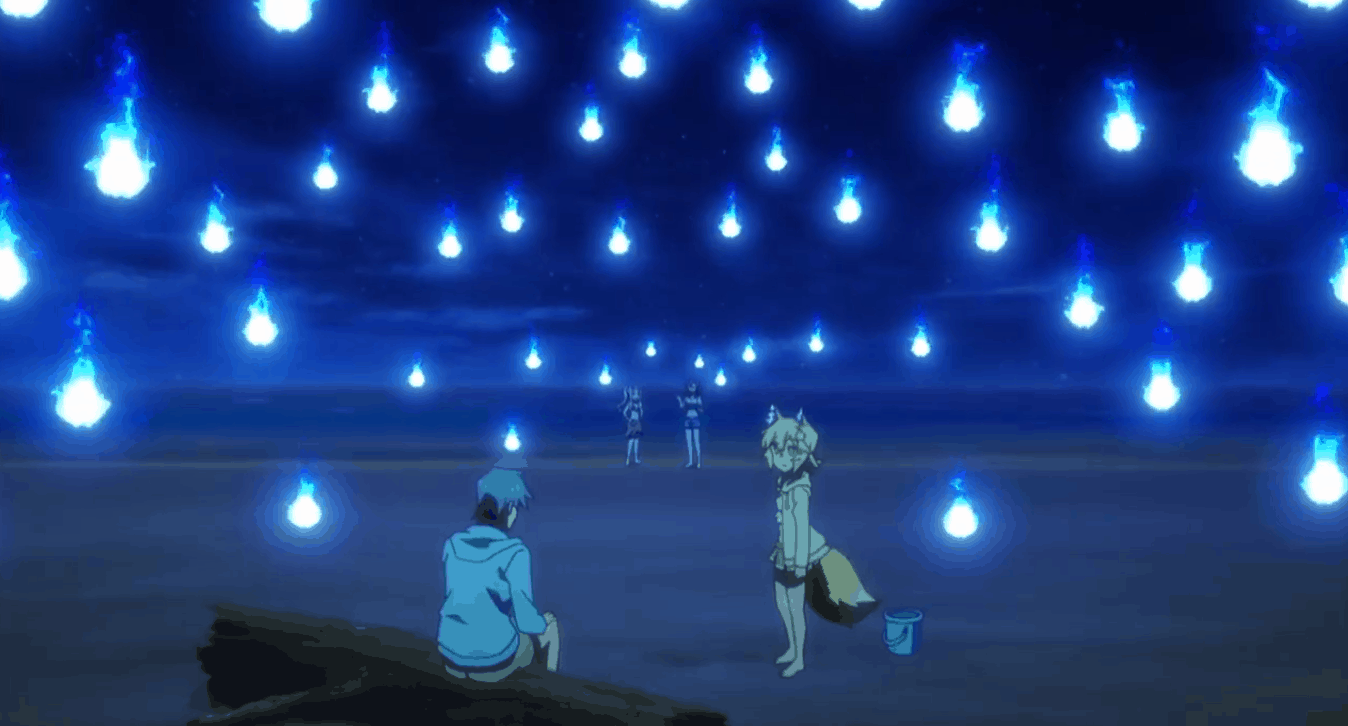 Me being a little weirded out aside, I really did like this show.

It was calm, soothing, and relaxing.

Without a doubt, Sewayaki Kitsune no Senko-san is a show I can easily recommend.