The Collector’s Corner: Dr Strange & The Book Of The Vishanti and The Eye Of Agamotto

I’m finally back from making my star studded television debut in Marvel’s What If? And seeing how Dr Strange played such a big part in that show and we are just three months from the premier of Dr Strange In The Multiverse Of Madness, I thought I would spotlight the good doctor here. 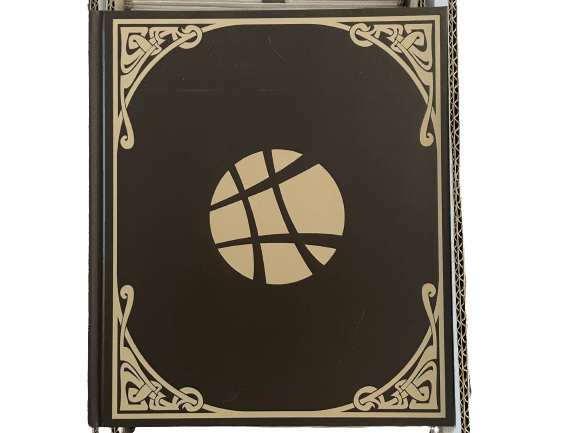 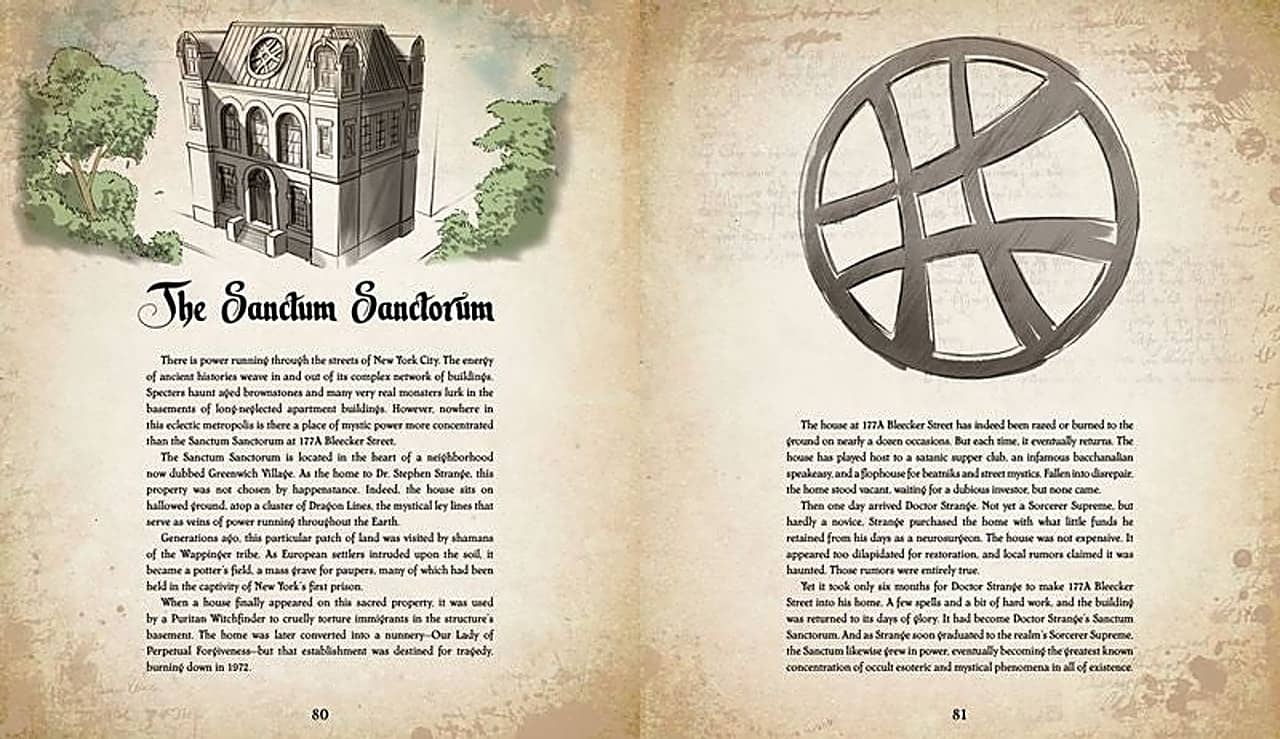 The Vishanti are comprised of three ancient entities: Oshtur, Agamotto, and Hoggoth. Long, long ago they battled beings such as Shuma-Gorath in service of man. Today, they are said to have moved on from the concerns of men. For sure, though, they have left many spells and magicks at the disposal of magicians such as Dr Stephen Strange. 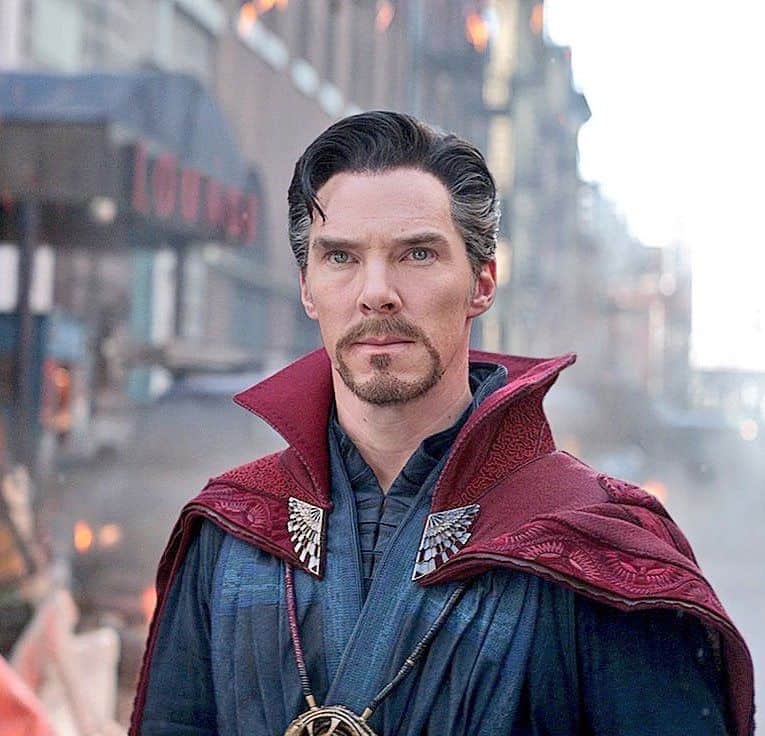 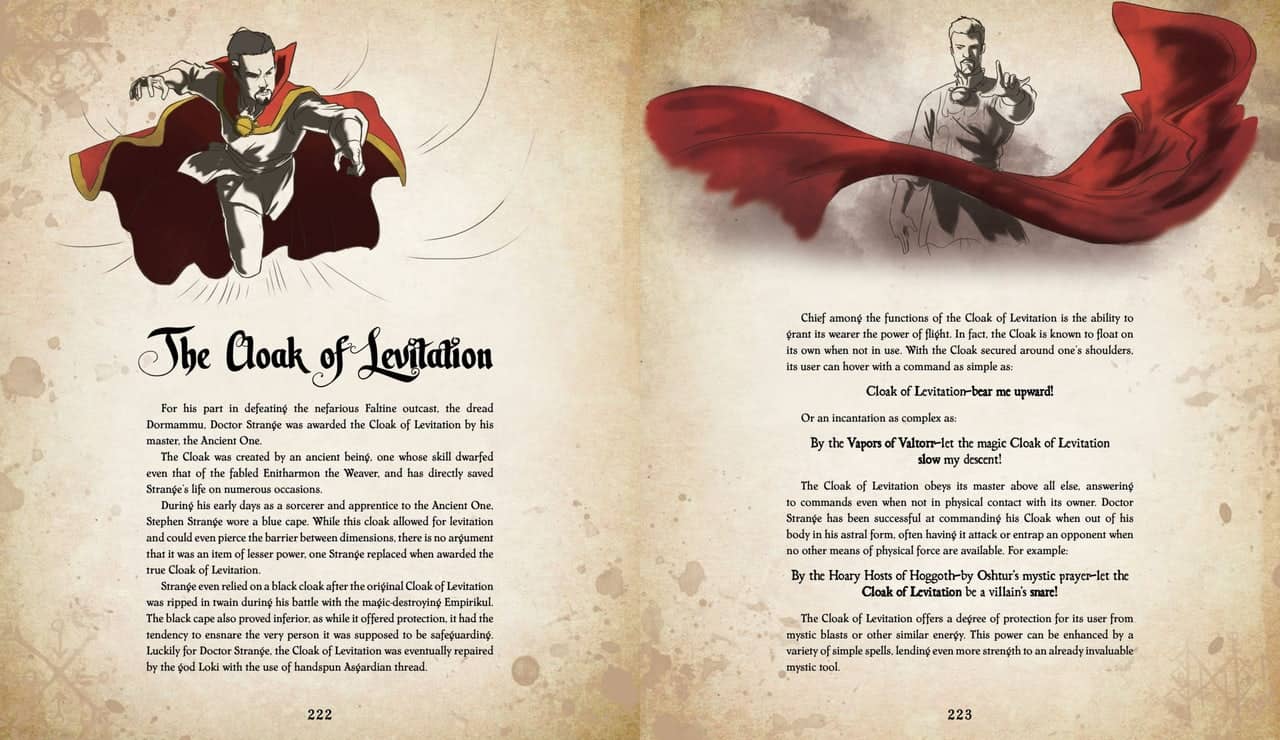 “A devout pupil of the arcane” writer Matthew K Manning has authored The Book Of The Vishanti for Marvel Comics and Abrams ComicArts. The hardback comes with a half book cover over a brown book with Dr Strange’s window symbol embossed on the front. The actual Book Of The Vishanti resides with Dr Strange but this “facsimile” has a double impact–it reads as though the reader is a novice magician looking at The Book Of The Vishanti and the spells and advice contained within. It also offers up some chapters on all things related to Dr Strange such as antagonists Nightmare, Dormammu, Cthon, Umar and Mephisto. There are entries on Dr Strange’s allies Clea, Wong, Dr Voodoo, Scarecrow (Straw Man), and the Scarlet Witch. For safety’s sake I have only included excerpts related to Dr Strange as the pages featuring spells and incantations are too dangerous to put out in the open. 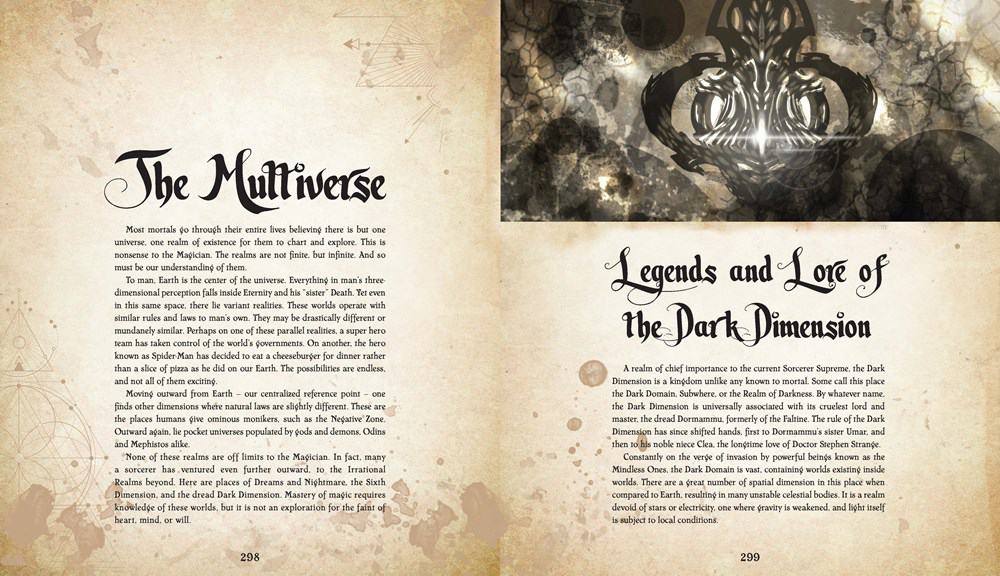 Author Matthew K Manning creates a journal of magic and the current Sorcerer Supreme, Dr Stephen Strange that allows the reader to imagine themselves as magicians learning the arcane arts. Manning’s previous works include writing the exploits of such super heroes as Spider-Man, Wolverine, Iron Man and others and his knowledge shines in this masterpiece The Book Of The Vishanti. 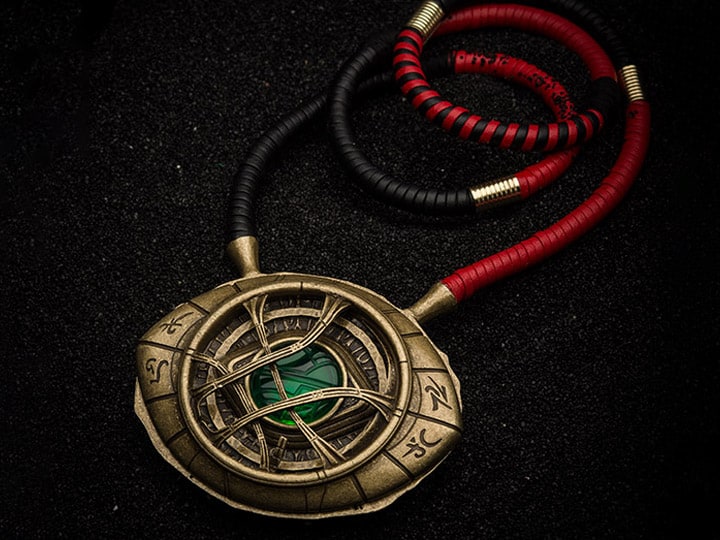 While the books in his Sanctum Sanctorum are incredibly vital to Dr Strange, so are the artifacts he keeps. Chief among these is the all-seeing Eye Of Agamotto. Now you can own your own Eye Of Agamotto in two different styles. First, Diamond Select Toys has a new and unique entry in their line of Marvel Gallery statues. 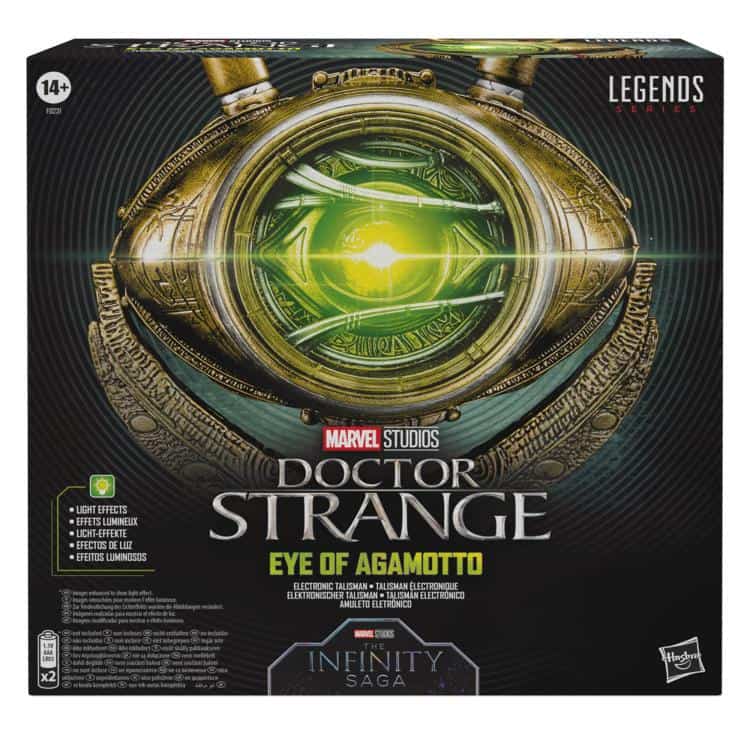 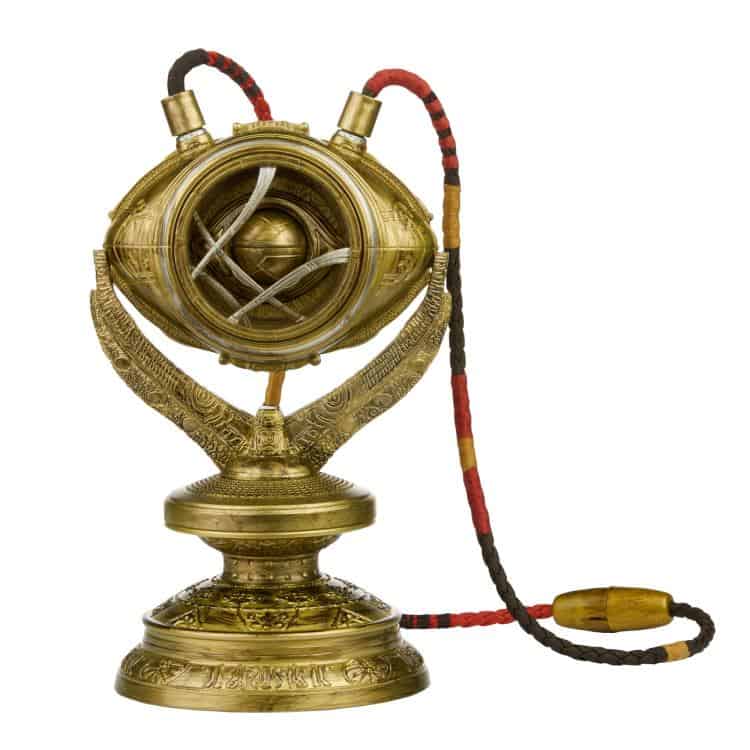 This prop has more in common with the Marvel Legends Gear than the Marvel Gallery Statues but thankfully you won’t be paying the price of the Gear items such as the line of super hero helmets and props like Captain America’s shield or Thor’s Stormbreaker as it retails right around $49 depending on where you buy it. It comes in two pieces, a stand for the Eye and the Eye itself which can be worn around your neck. There is a spring mechanism on the Eye that, when pressed, opens the Eye to reveal a green Infinity Stone that lights up. The stone can be removed and has 3 small magnets which fit inside the Eye against 3 metallic squares. Be sure line them up properly…when the Eye closes it shifts the stone to turn off the light. 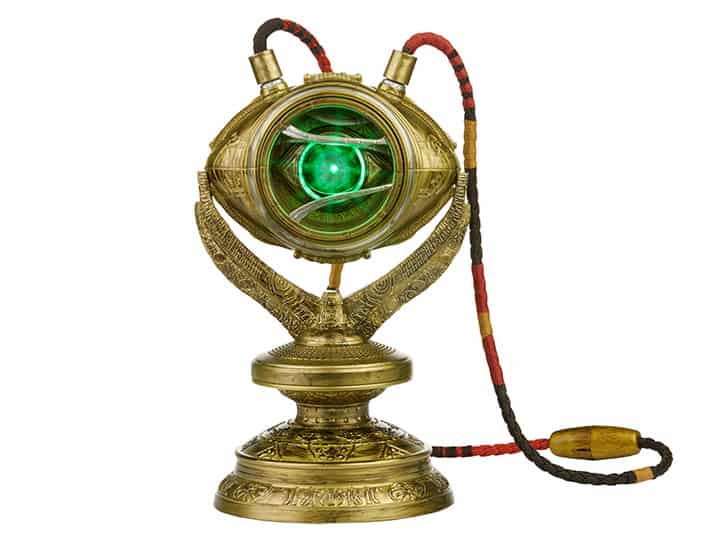 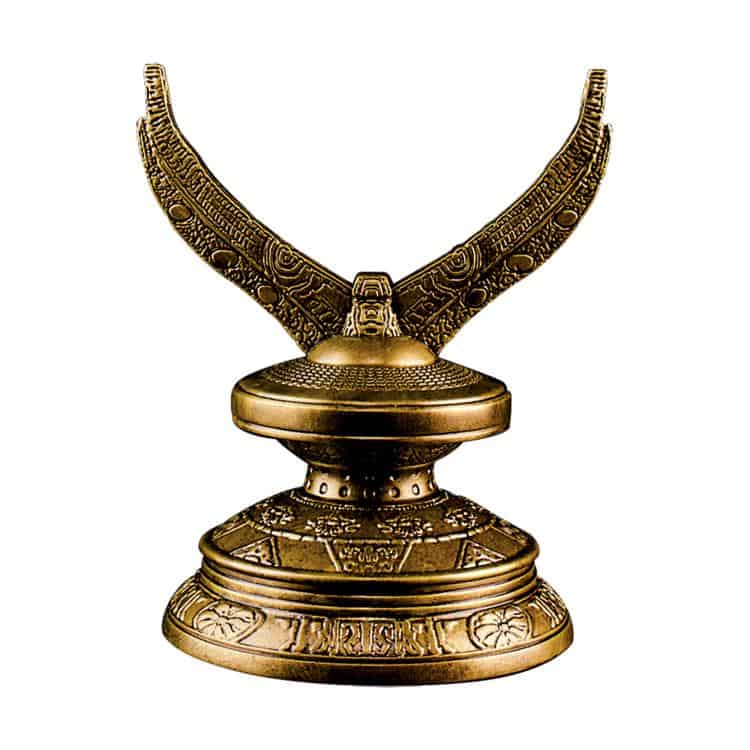 I would recommend handling both pieces with care as they are not made of very sturdy plastic and might break if dropped. Also take care when placing the Eye on the stand, the grooves where it fits in are fairly narrow. This Eye of Agamotto runs on 2 AAA batteries which are not included. 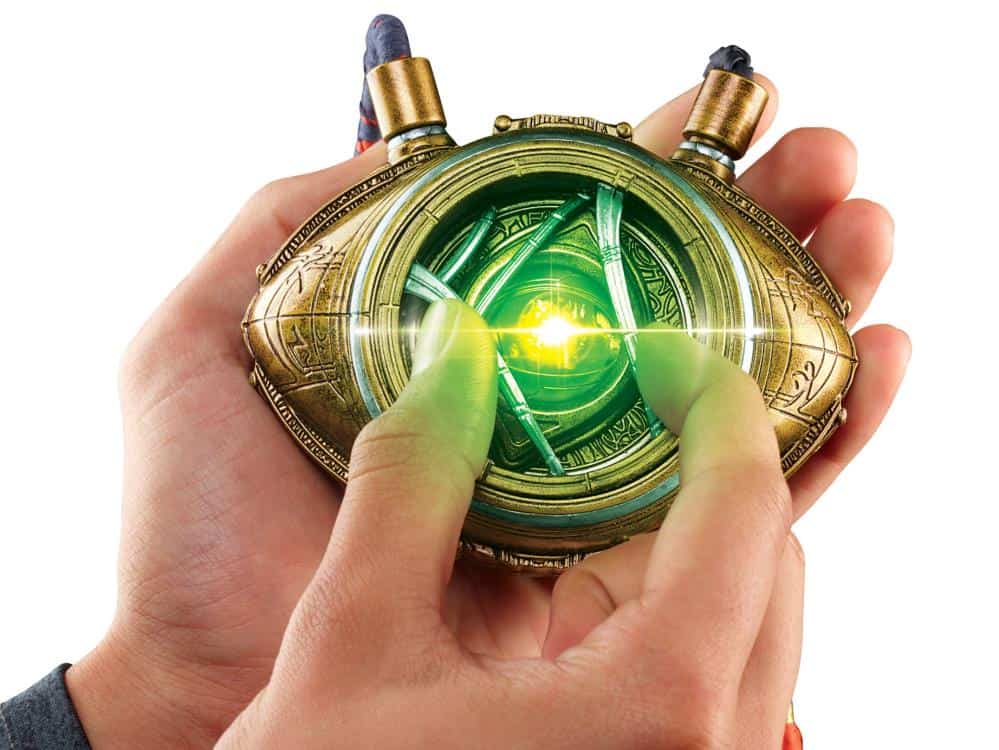 Now, if you want a much nicer, metal version of the Eye Of Agamotto AND would like a fantastic bargain I’m gonna take care of you. When I recently acquired this Eye it was $89 at Big Bad Toy Store. But now my little Collector friends, you can get the same Eye for only $49! This highly detailed metallic Eye has a switch that lights up the green Time Stone inside and runs on a CR926 battery which is included. It does not spin, however, like the Diamond Select Toys Gallery Prop. 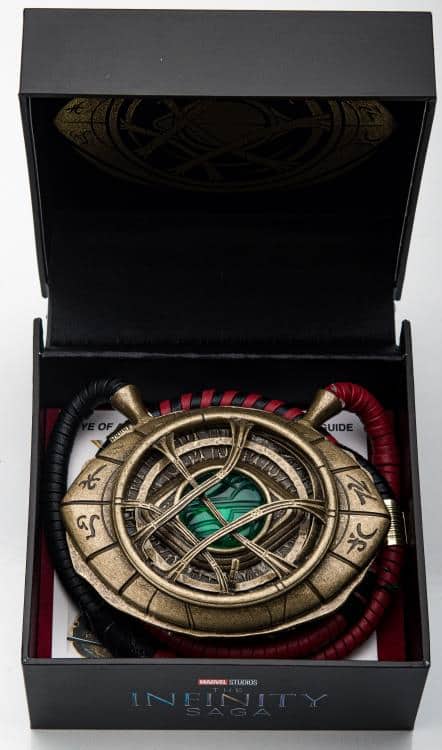 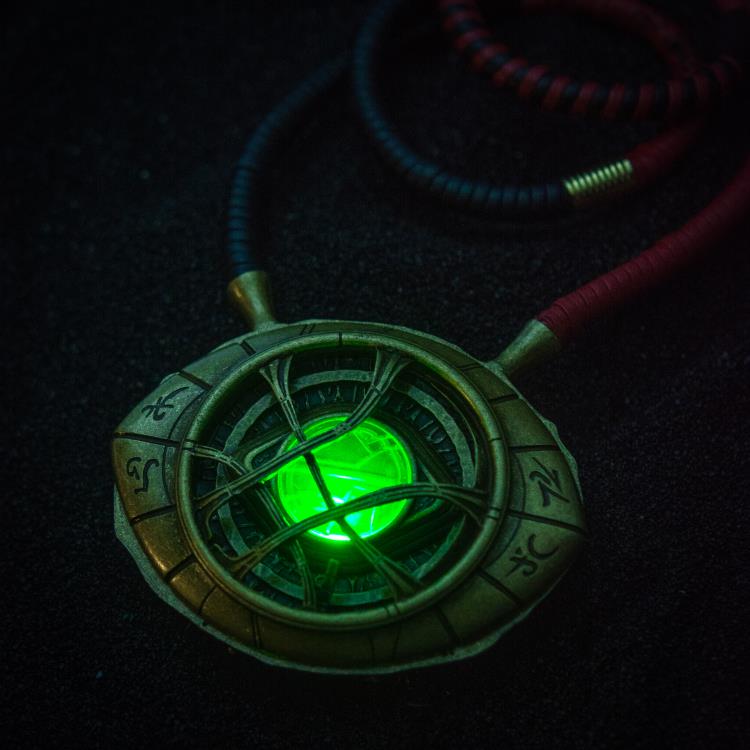 This is definitely a must-have for anyone wishing to cosplay as Dr Strange at those cute little conventions you go to. But I really think you’ll want to have both of these Eye Of Agamotto props especially with the nicer one selling for nearly half off. 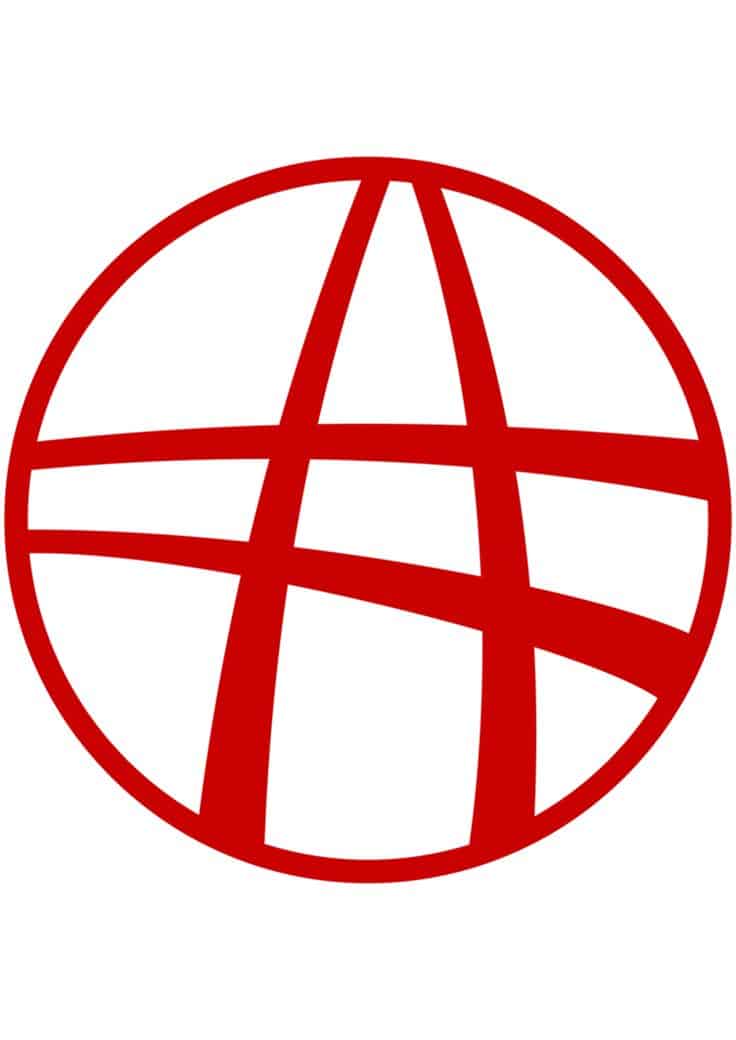 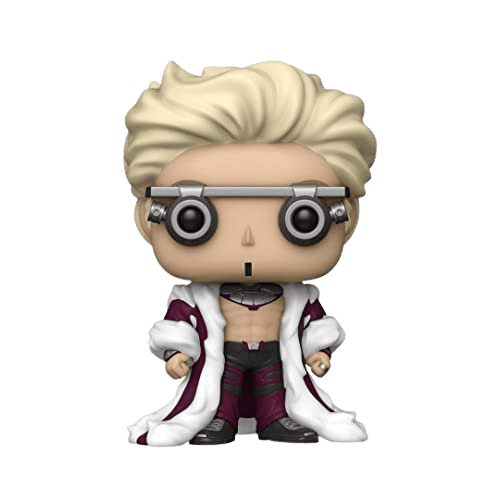 Now, be sure to catch my appearance on the Disney+ series What If? And join me here next time for a look at more fabulous stuff!

Collector's Corner: Dr Strange & The Book Of The Vishanti and The Eye Of Agamotto