Another Comic-Con has come and gone (sad face emoji). Now, many of the wonderful things that you just must have are available to pre-order! Isn’t that nice! First off I’m going to show you new entries in Kotobukiya’s new ArtFx Premier line of statues. 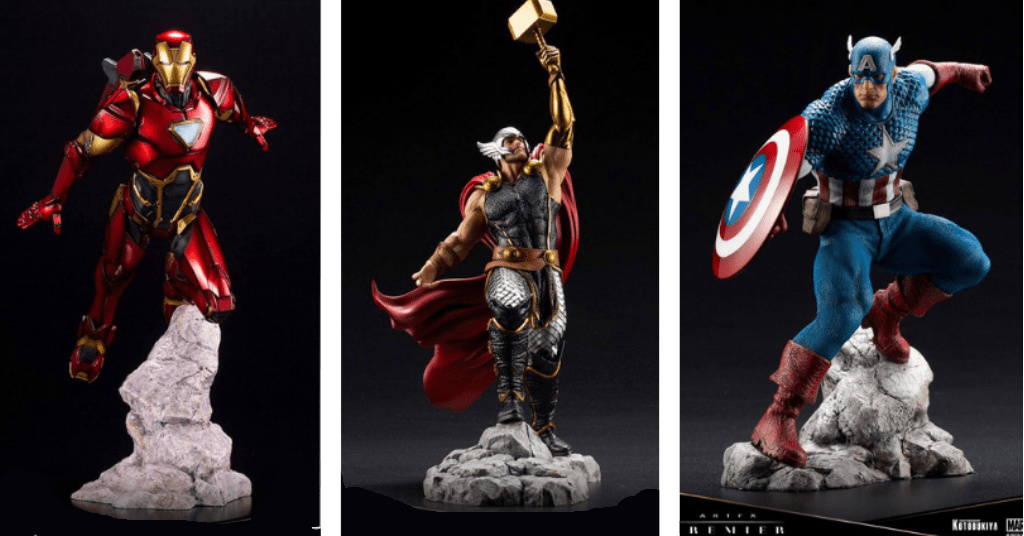 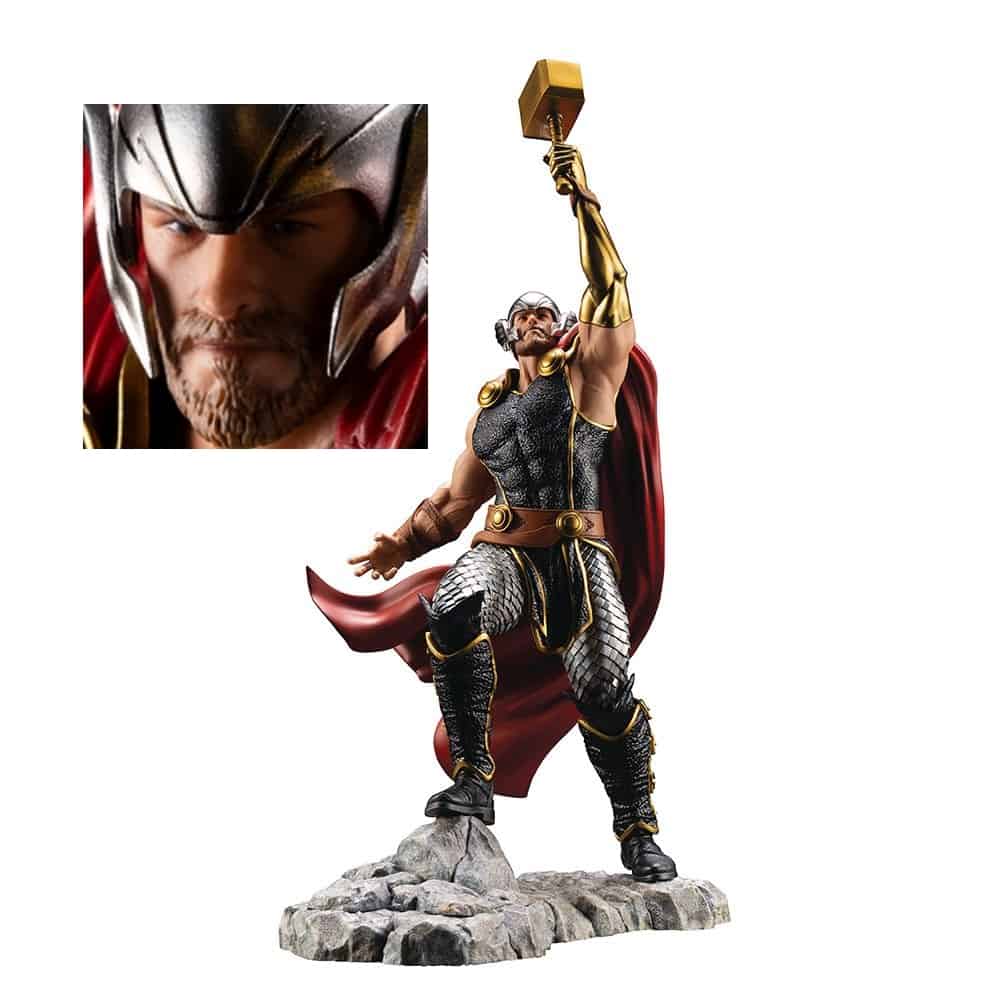 Kotobukiya started off their new line ArtFX Premier with Thor, Iron Man and Captain America. The Thor statue is really very good, especially in the face and I knew it must join my Thor collection. The Iron Man and the Captain America statues are, however, very generic for the characters in every way from the pose to their costumes. 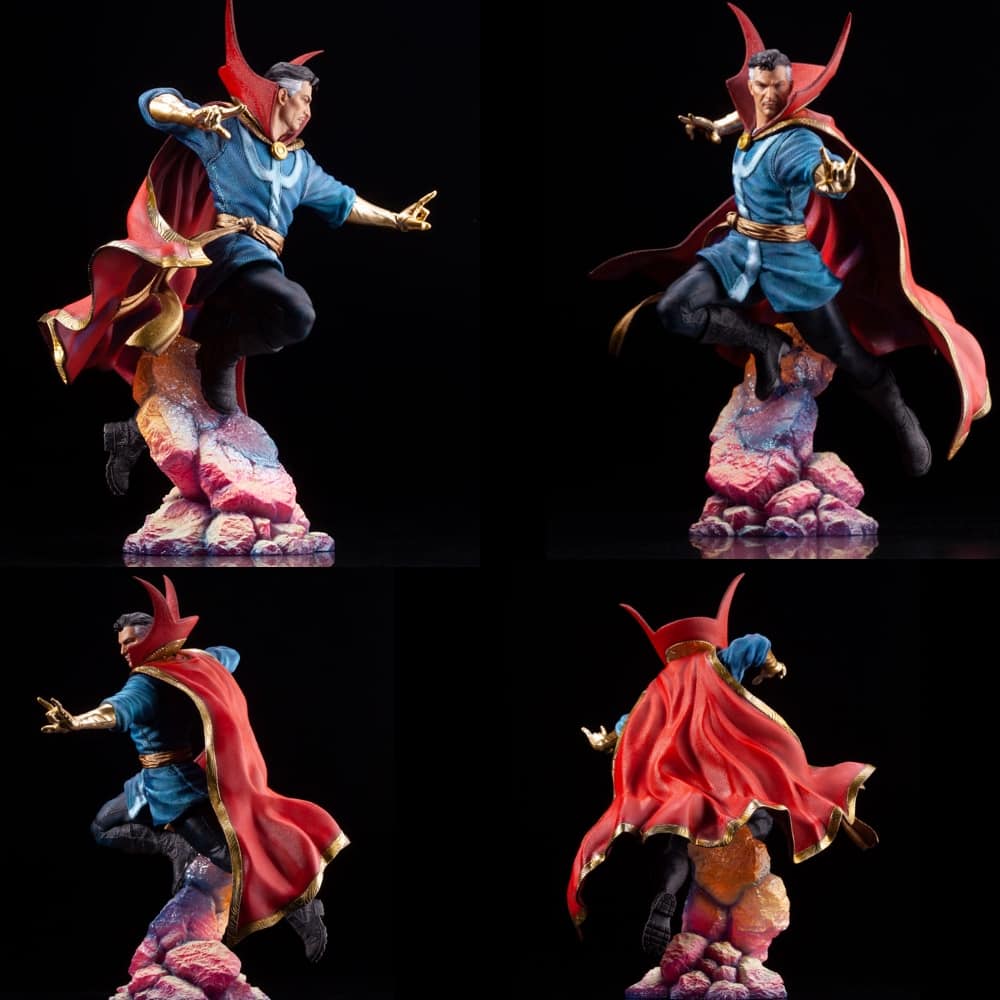 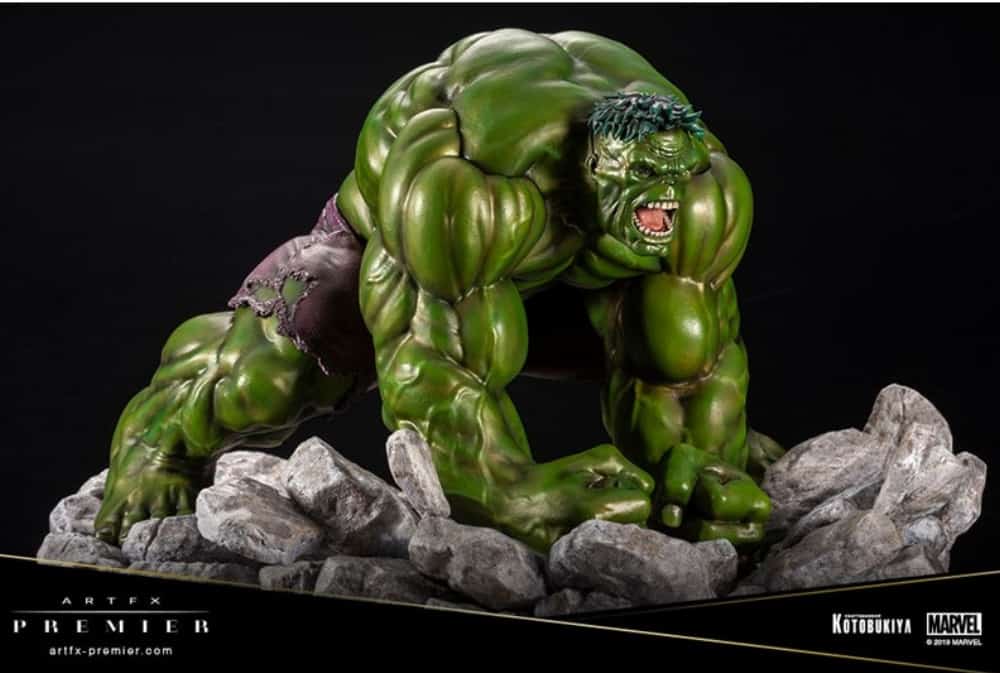 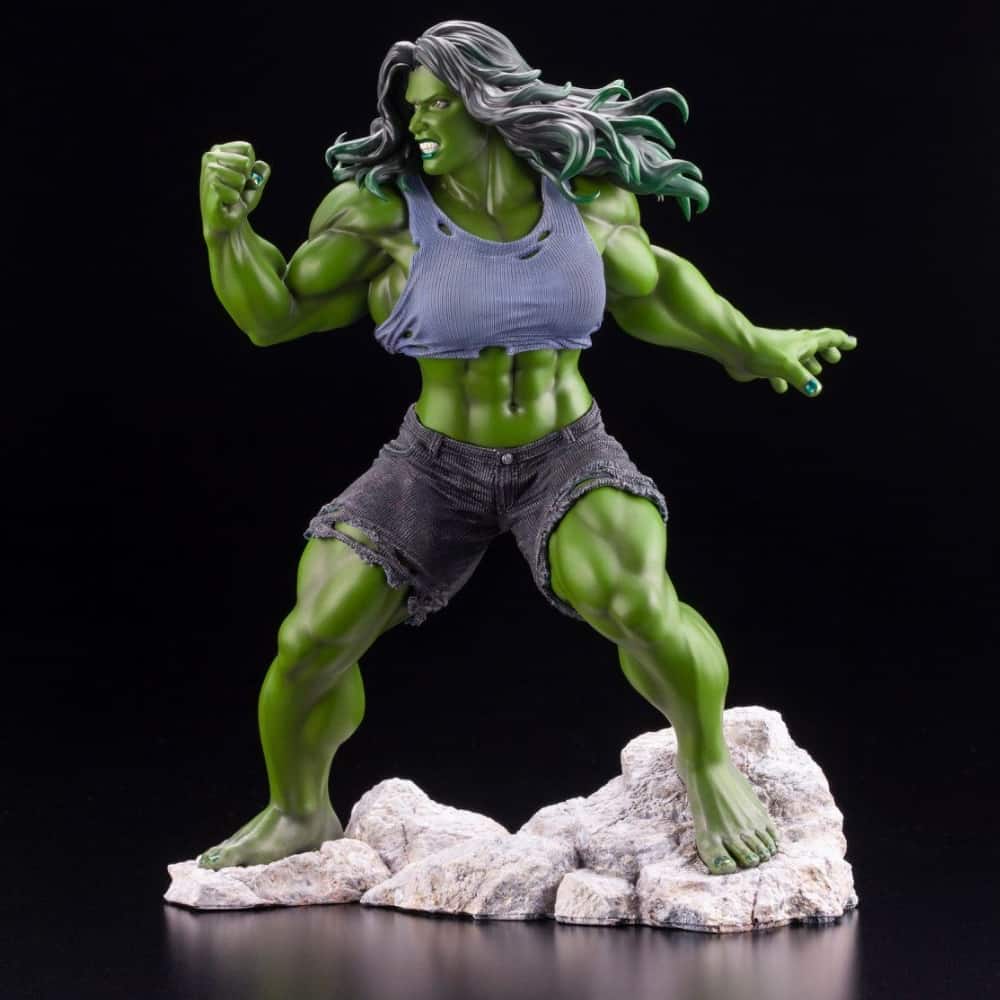 Dr. Strange, The Hulk and She Hulk followed next and, well, sorry, but I’m just not a fan of these two Hulk sculpts. The musculature on the Hulk is terrible, it looks like a real life statue that was forged out of metal and painted instead of a “real” character. The She Hulk seems to be reflective of her current state in the Avengers comics and again — in both cases — I find the muscles problematic…this time it’s just too much, too male looking compared to her previous looks. The Dr. Strange statue is rather nice and all the statues in this series are comic based as opposed to all the movie based statues that have been coming out of late. But there are certainly a lot of statues of the Sorcerer Supreme for your “buk” out there. 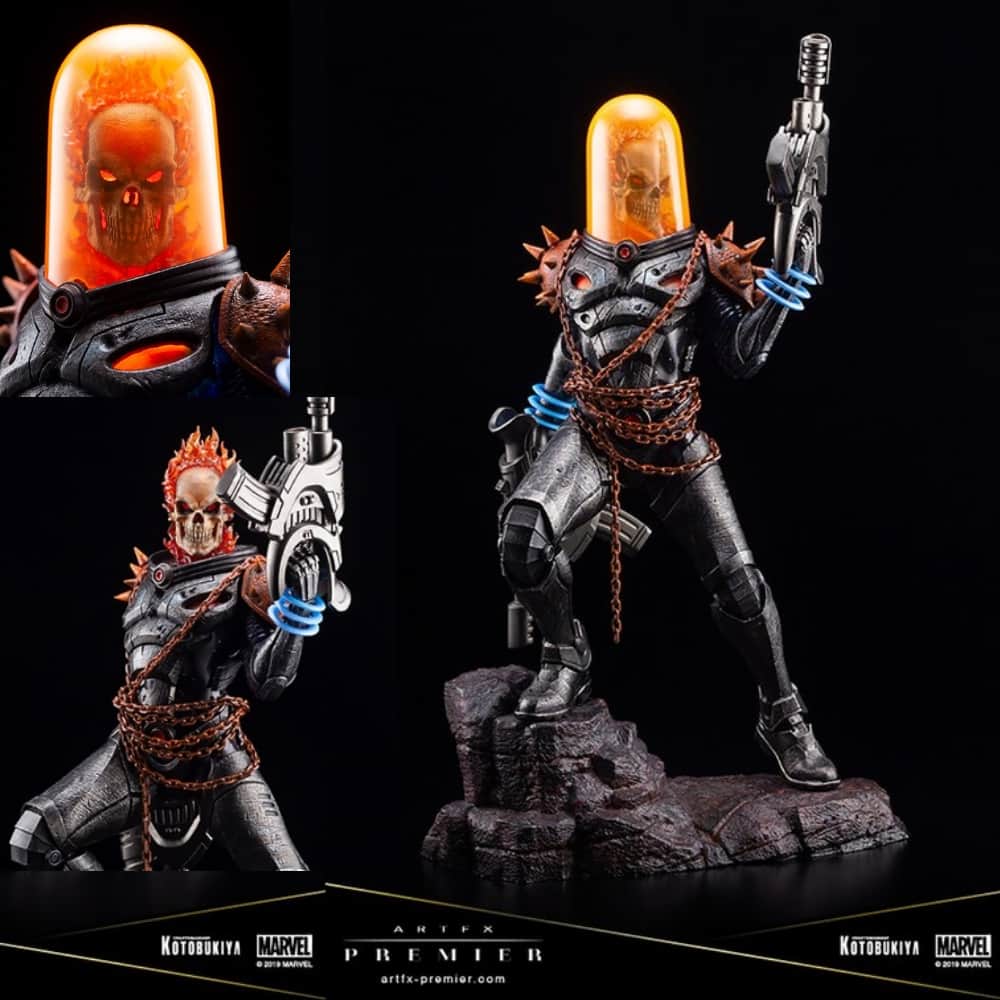 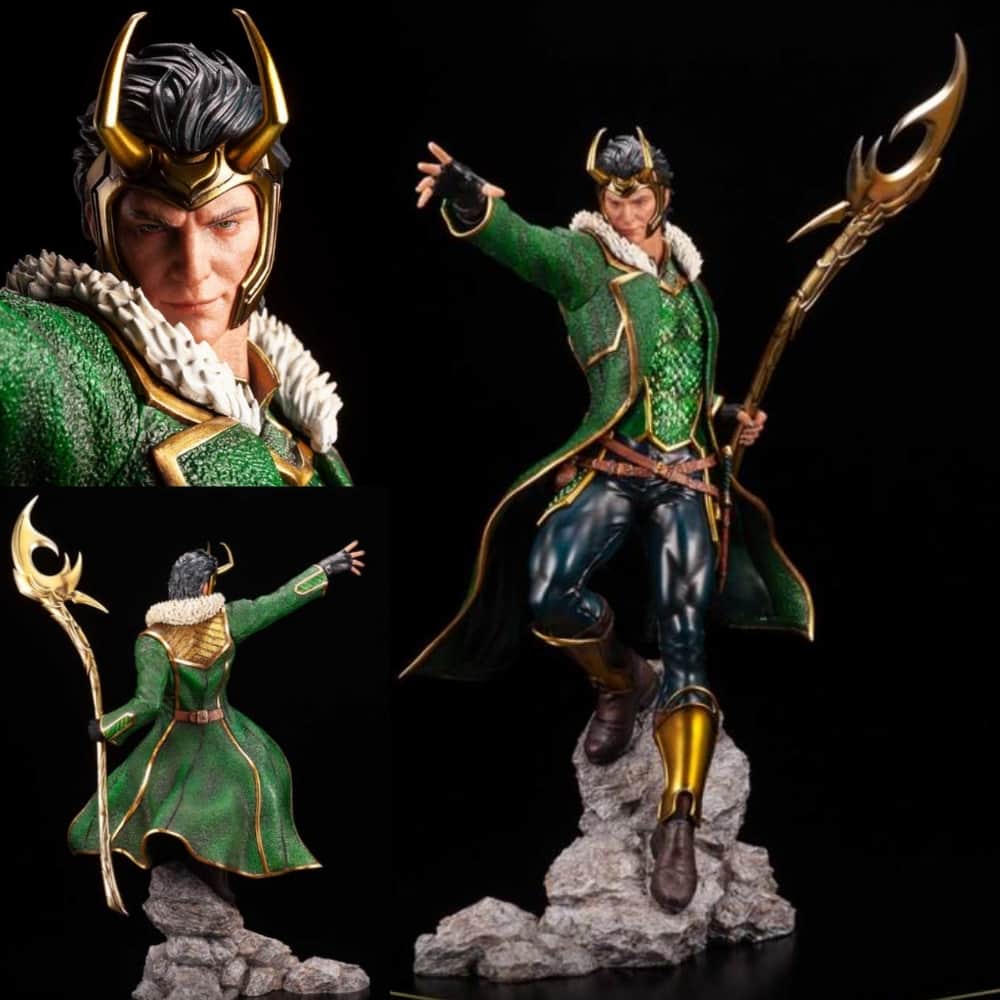 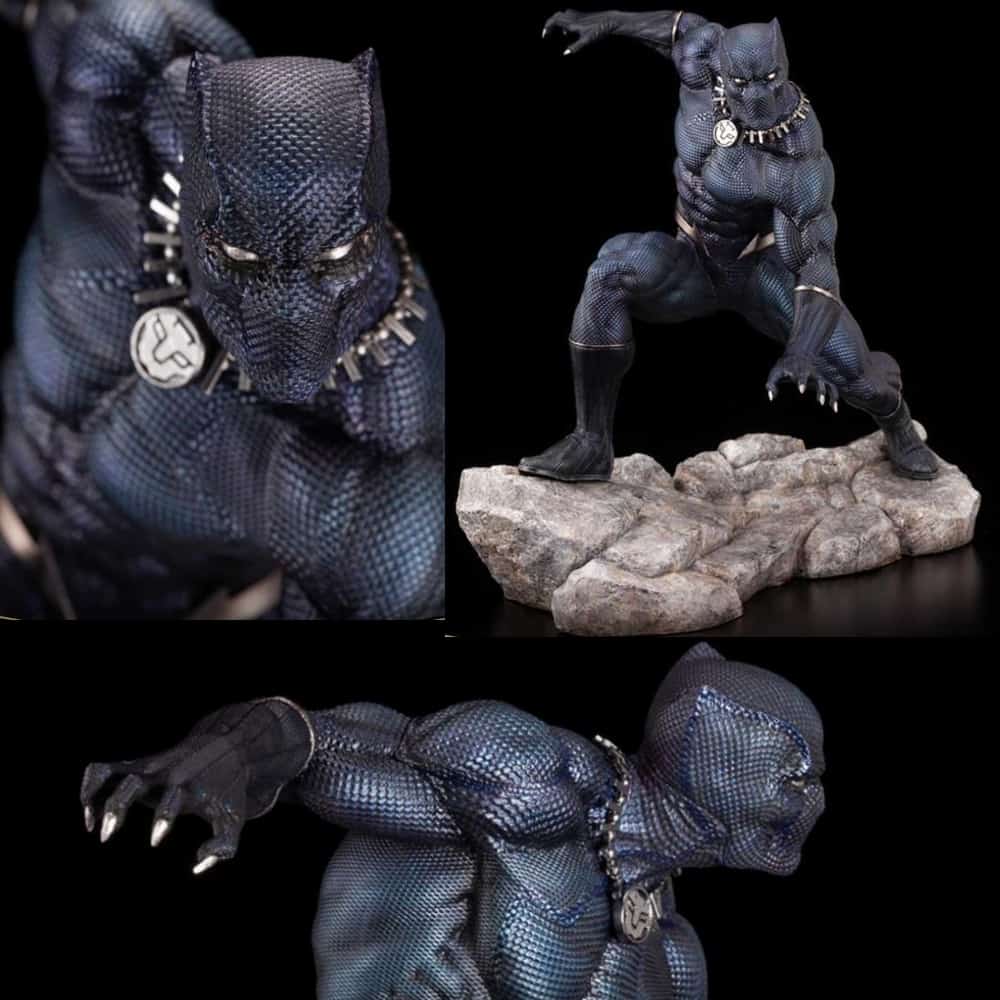 Now, joining the ArtFx Premier line are Cosmic Ghost Rider, Loki and The Black Panther. This Cosmic Ghost Rider who only just very recently joined the Marvel Universe is the first and as yet the only statue based on the character and you can display him with or without the helmet although I think he looks best with the helmet as it serves to further set him apart from all the other Ghost Riders vrooming around. Loki, again, is another beautiful looking statue and is rendered in a totally different look than other Loki statues out there. He will join my collection as will probably the Cosmic Ghost Rider. But can we talk about the Black Panther? Another very blah pose with nothing but some costume texturing to go for it. Why not go for the Marvel Gallery Black Panthers which have 4 different versions to choose from at a third of the cost? I myself am quite happy with the Black Panther Fine Art statue Koto did about a year or so ago. 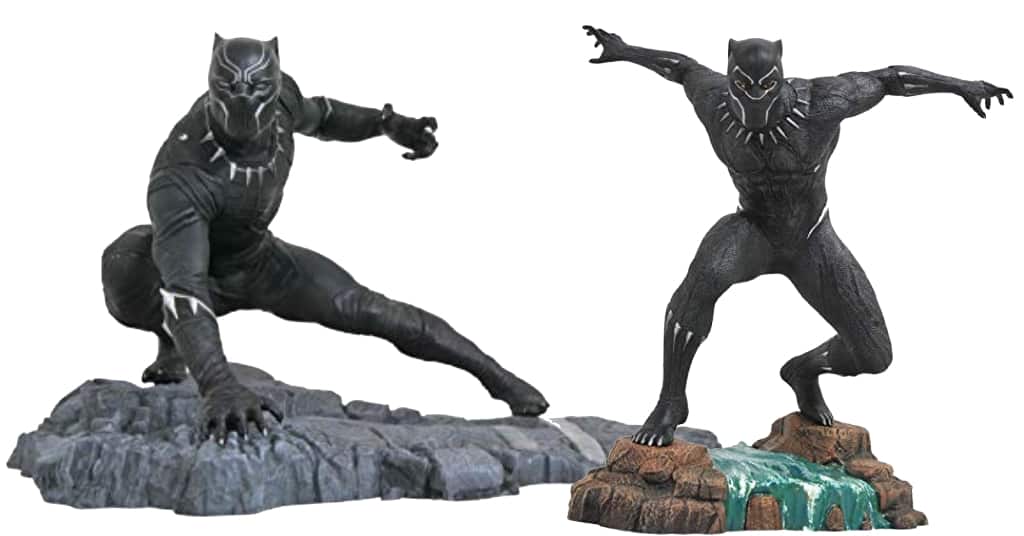 Which brings me to the sordid topic of coin. The Kotobukiya ArtFX Premier line which boasts incredible paint jobs and quality are quite expensive considering these are all PVC 1/10th-7″ scale plastic statues! The Black Panther sells for $125 while the Marvel Gallery Statues are $40. The Gallery statues lack some of the detail but shouldn’t the Kotobukiya statues give you quality without jacking up the price so high? The Panther, Iron Man and Captain America are their least expensive statues at $125. Thor is $135, Cosmic Ghost Rider is $145 and Loki is $150. Dr. Strange and She Hulk ring in at $175 and the Hulk is $189. And again I must point out these are plastic statues! There are other statues out right now of most of these characters for much less…many you can find from Iron Studios’ 1/10th scale line. The only real thing the Kotobukiya statues have going for them that the others don’t is if you drop one it probably won’t break. One last thing about Kotobukiya…they really need to differentiate their statue lines with names that don’t sound so much alike! 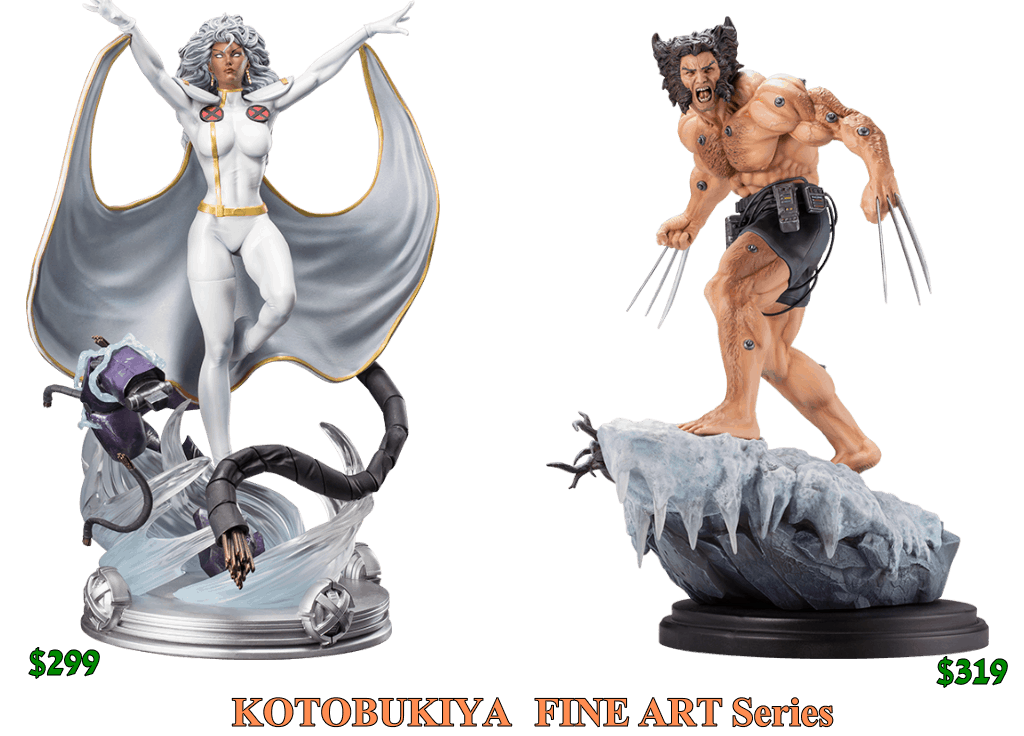 First they have the Kotobukiya “Fine Art” statues which are their top of the line 1/6 scale polystone/resin statues such as the recent Storm in her white costume that sold for around $275 and Weapon X for $319. 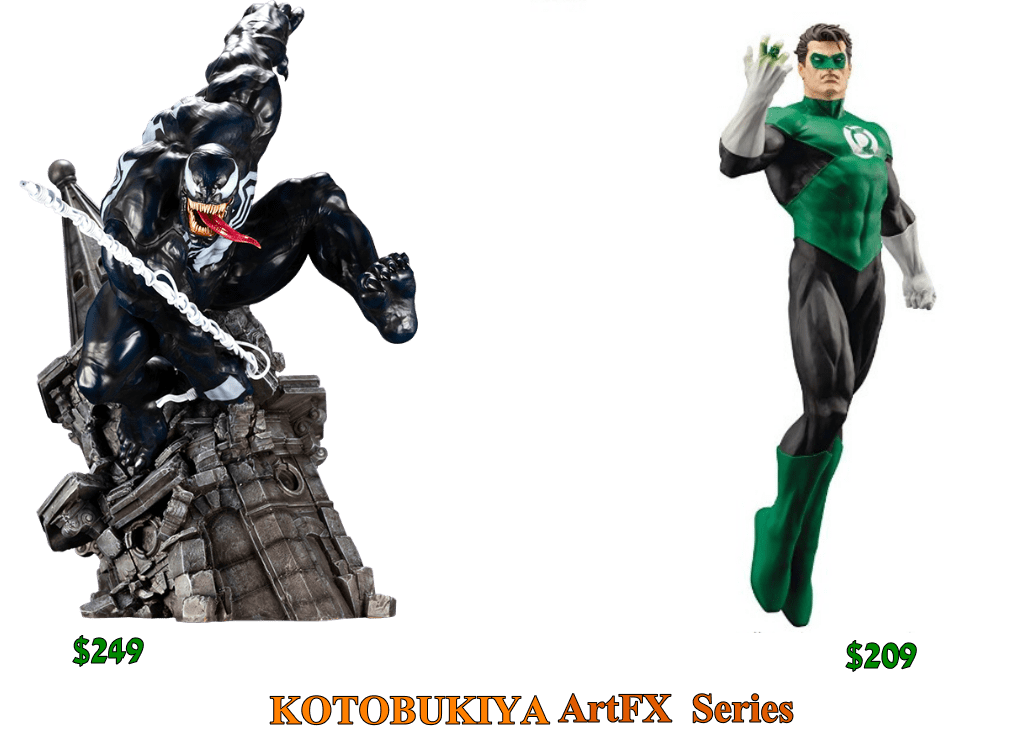 Then comes the Kotobukiya ArtFX line which are also 1/6 scale but made from PVC. Sometimes they come with LED features. The recent Venom statue sells at Big Bad Toy Store for $229…not much different from the Fine Art line except one is polystone one is plastic (PVC). 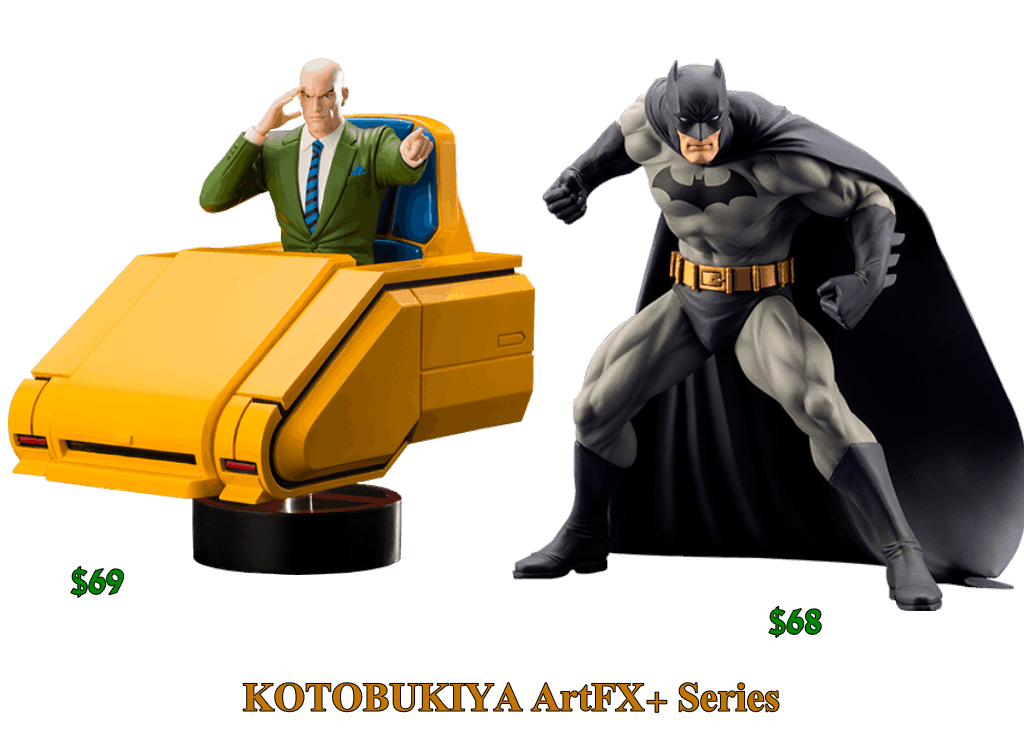 Next we have the Kotobukiya ArtFX+ line…these are smaller 1/10 scale PVC statues with examples being The Avengers and X-Men lines. The confusing part here is the “+” which would infer to most people that it’s a grade above the ArtFX line when it is actually a step down. The Avengers series were approximately $50 and the X-Men ranged between $40-$90. These statues are the closest in line with Diamond’s Gallery Statues. 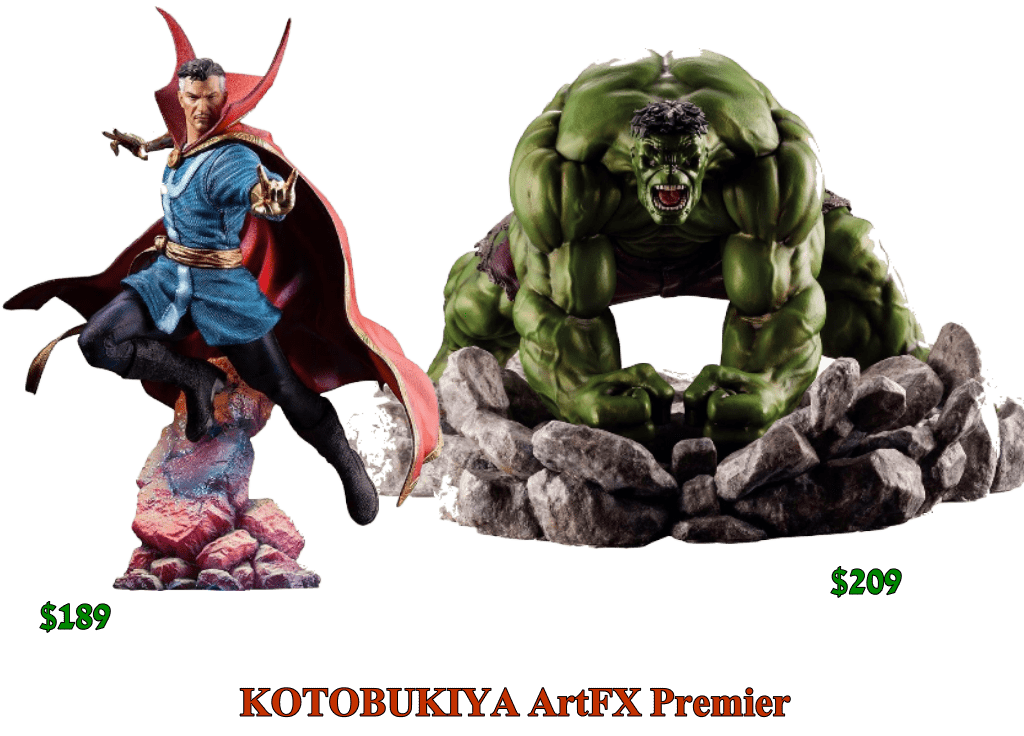 Now comes ArtFX Premier series which has the connotation that it’s something on a grander scale…which it is when it comes to price. Yes these statues certainly look like they have fantastic paint jobs and texturing but does that really justify the price to you, my Collectorlings? Remember the DC and Marvel Gallery Statues, also made of PVC, run from $40-$50 in most cases and are usually larger than the ArtFX+ and ArtFX Premier statues. The quality of the Gallery lines continue to improve and while they may not have the detailing of the Kotobukiya ArtFX Statues they are one third to one quarter of the price and larger. 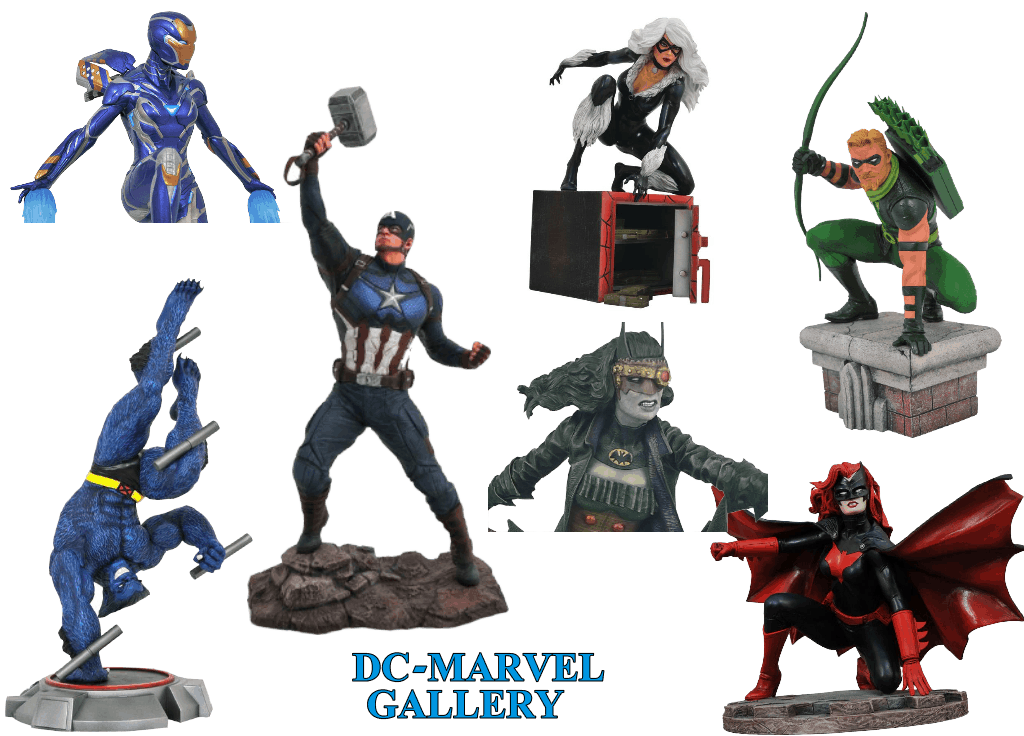 In the end, it comes down to your own personal tastes and what you can afford. Kotobukiya’s Fine Art Statues are some of the best polystone and resin statues on the market. Perhaps the new ArtFX Premier series represents a new stage in statue making…a PVC statue that looks every bit as beautiful as a polystone statue at a fraction of the weight (yes, I know your shelves can get quite weighed down!). But I still think that Koto could do to bring the price down some as so many collectors are being priced out of collecting by soaring price tags. I’m not advocating one company over another — at least not till some decent bribes start coming in! — but new people who wish to start collecting will find a variety of characters in the Gallery Statues,  albeit without the fancy paint jobs, and then can decide from there if they’d like to get serious about statue collecting and start shelling out $700, $800, $1200 and more for the big stuff like Sideshow offers.
Now, let’s see what else has come up this week! 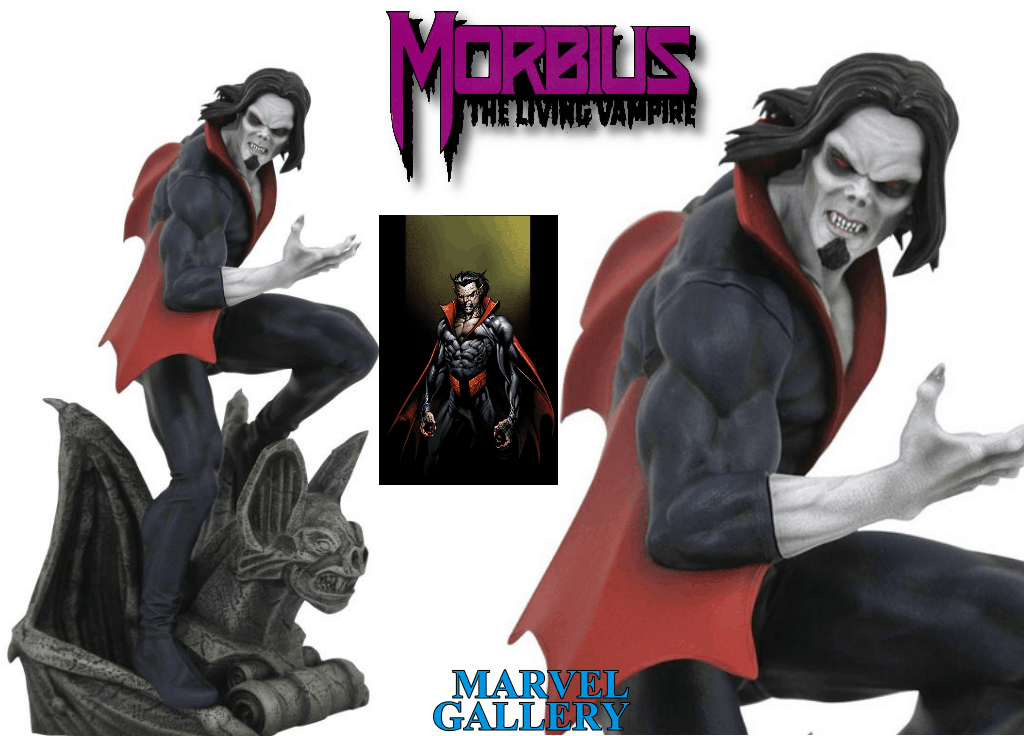 This is my personal favorite of the week, the Marvel Gallery Morbius, The Living Vampire Statue. I’ve always liked Michael Morbius and aside from the Venom and Carnage Gallery Statues which have just hit shelves, Morbius represents the first of Marvel’s horror characters to come out. I’m sure it probably has much to do with word that Morbius is headed to the movie theaters but I hope Marvel will continue with some more monster characters such as Werewolf By Night’s Jack Russel, Danny Ketch’s Ghost Rider, and something based off of Gene Colan’s amazing artwork done for Tomb of Dracula. A Son Of Satan statue would also be quite awesome as would a Man-Thing Gallery Statue. My interests have always been in the characters we don’t see much of because Iron Man and his buddies having been hogging all the glory. 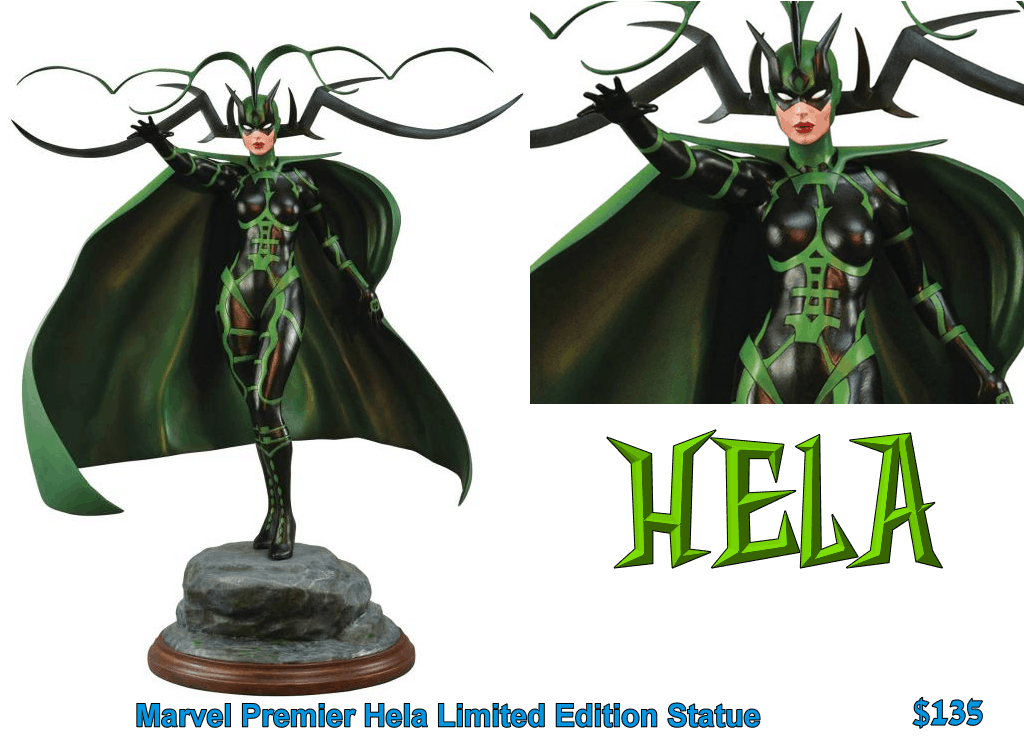 Having missed the exquisite Hela statue by Randy Bowen, another chance now presents itself to own the Goddess of the underworld with Diamond Select’s Hela Marvel Premier Statue. 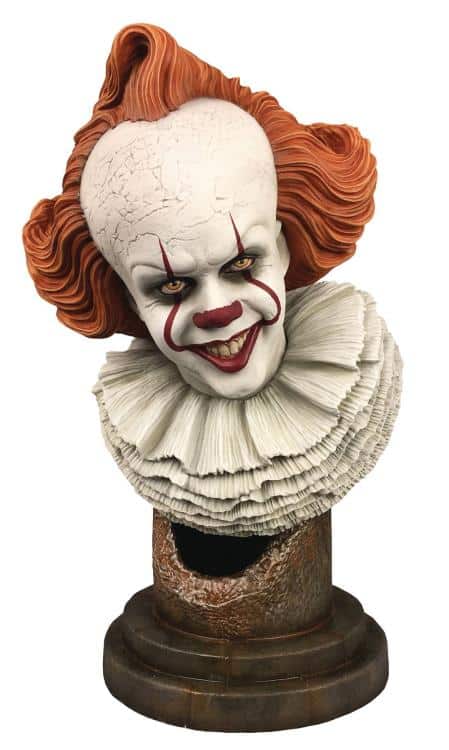 If your taste runs toward horror movies, Diamond Select is offering one of their Legends in 3D one-half scale busts of the new rendition of Pennywise the Clown from IT Chapter Two coming to a theater near you. It will sell for $135-$150 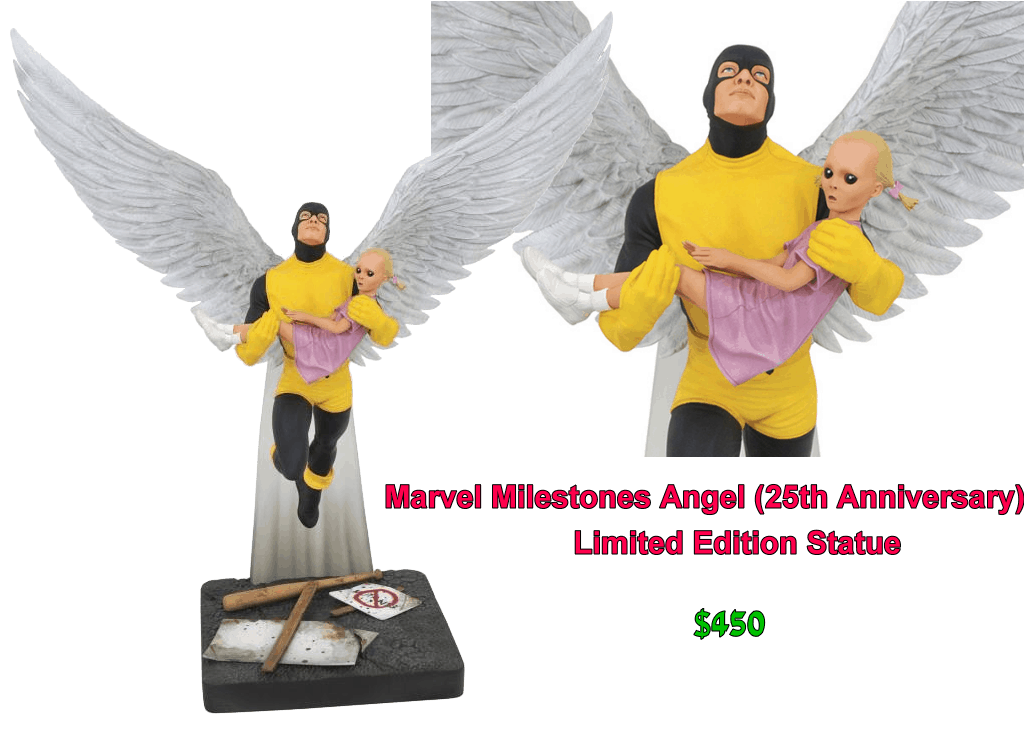 Finally, based on Alex Ross’s series Marvels ,which is celebrating its 25th Anniversary since its first publication, comes this Angel statue taken from Alex’s artwork. Standing 16 inches tall and limited to only 1000 pieces, this one will surely be a collector’s item!
Always so much to show and so little space! But if I showed you everything at once it would deprive me of this time with you. So until next time, xoxoxo, The Collector.

The Collector’s Corner: What If? Merchandise
August 9, 2021
Recent News & Reviews