20XX: Transport #1: Choose Your Own Adventure 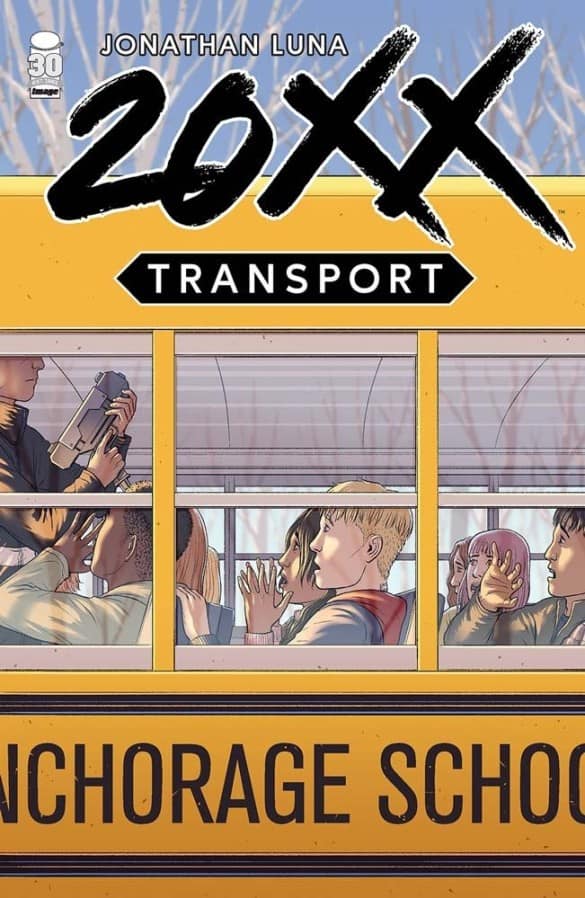 In the world of 20XX in Anchorage, Alaska a seemingly normal teenage boy engages a bunch of thugs trying to take over his school bus on the way to school. Little do they know he has special telekinetic abilities. Jonathan Luna allows, for the first time ever, an RPG style comic. Gamers, you're gonna love this.

Sometimes there is no difference between comics and video games. The ability to control the outcome of a story is what makes RPGS so fun to play. Deadpool, Batman, Zelda, even Pokemon. All of these games have one thing in common: the story is different for every player. Jonathan Luna takes this approach with his comic 20XX:Transport, the follow-up to his miniseries of the same name. In the future with abilities and hi-tech weapons and computer systems, Luna takes us to Anchorage, Alaska where we meet our protagonist Colter.

Colter is a typical teenage boy plays video games and appreciates classic systems. He seems typical at first, anyway… He finds himself in the middle of a hijacking of his school bus and in a novel narrative setup, the readers are given choices on what Colter should do to handle the situation. I have never seen a comic quite like it. Luna gives his readers the ability to vote on how the story goes through his social media. Options are listed below the panels allowing the reader to feel like they are in control.

The classic lines of the artwork make it feel like an older video game like Razor or even inFAMOUS: Second Son. I appreciate the simplicity of it, not taking away from the story but adding to it with an undertone of the simple life aroused in excitement. It elevates the story to a new level. I enjoyed the telekinetic part and want to know why telekinetic powers are illegal. There’s more there.

As for the cover, it would’ve been cool to have Colter on the front using his powers or something. But issue #1 is hopefully a gateway for more. What will happen to Colter after his fight with gun slinging hijackers. I can’t wait for #2 to come out. I am sure it will be just as fun and action packed as the first issue.

Jonathan Luna hit it out of the park with #1 of 20XX:Transport. The story and artwork, he did the entire comic himself and he should be proud. What an accomplishment for an RPG comic. Readers prepare to lead the story into new heights and adventure leading 20XX:Transport with unlimited possibilities.

20XX: Transport #1: Choose Your Own Adventure