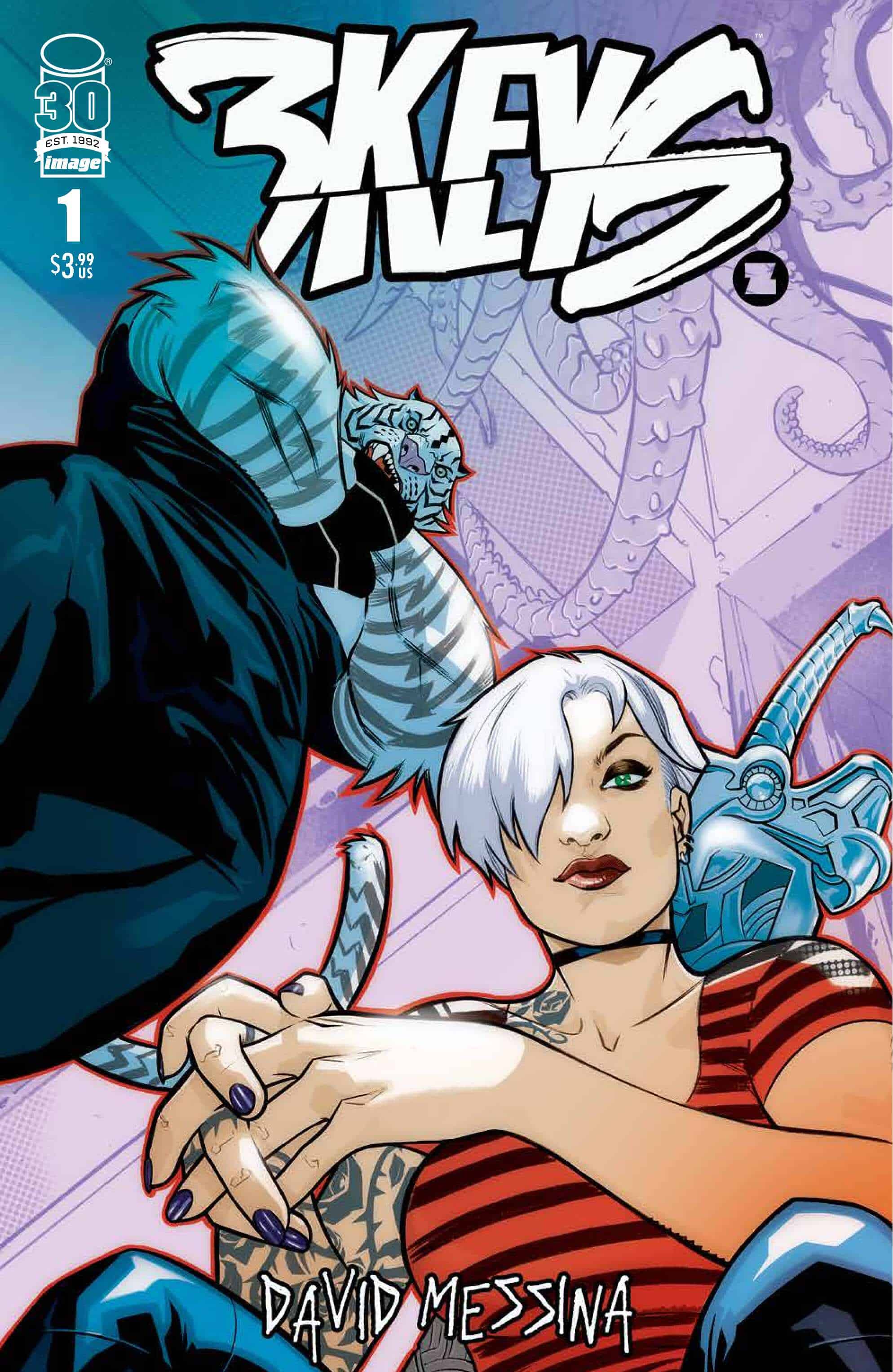 Did the inhabitants of another dimension flee into our reality to save themselves from the terrible wrath of the Great Old Ones...or to help prepare us for a final devastating invasion? And what if humanity's only chance against these Great Old Ones is an impetuous mischievous young woman and her sardonic furry and surprisingly violent mentor?

Life can be tough when you’re a multiversal savior who has to worry about getting new comic books on the shelves every week–and if anyone knows that, it’s Noah Violet Carter, a front counter employee at Mark’s Comics and part of the last line of defense against the Outer Gods.

If all of that sounds like a lot to take in, that’s because it is. 3Keys #1 lays out a very involved backstory in the opening three pages, and it benefits from multiple readings in order to keep it all straight. But even with that, by the end of the issue, I would have been hard-pressed to tell someone who the bad guys were or what world they had destroyed, or how they even got there in the first place. Part of this is because the names are a bit of a mouthful and repeated only twice outside the long introduction (yes, this is a bit of a nitpick). But more importantly, virtually none of 3Keys #1’s extended introductory backstory is important to this issue. While it may factor into the story over the long term, here, it is little more than an anticipation killer. Far from luring the reader in from the get-go, it is instead something of a chore to get through.

Unfortunately, 3Keys #1 doesn’t improve once the issue moves past the backstory and introduces Noah. She has white hair, a tattoo sleeve…and a shirt showing ample cleavage. That last part is thanks to the comic shop’s owner. He employs two very attractive women to work the front counter, drawing nerds into the store, while the one employee who actually knows anything about comics works in the back of the shop. Noah and her coworker Sandra go on to discuss how attractive people who have lives don’t read comics and when Leo, the guy who works in the back, interjects that lots of nerds have lives and some “even have great tits like Noah,” Sandra says she believes that–because the tits belong to fat men.

3Keys #1 completely lost me at this point. I finished the comic and found the story mildly diverting. At one point, the narrative cuts away from Noah, who we don’t spend enough time to connect with, and moves to an action sequence with one of the other women (Dale) in this last line of defense against the Outer Gods. This was the most interesting part of the issue.

But the damage had been done. After the comic shop scene, I found myself actively hostile to creator David Messina (handling both writing and art) and Scott Tipton, who provides a dialogue assist. Perhaps the intent is supposed to be some kind of reverse commentary on how stores like Abercrombie & Fitch work and how, over the years, society has more and more found that unacceptable. Or perhaps the intent is to show that, actually, not all comic book readers fit this stereotype. But such readings require a very large leap that the text doesn’t support (at least in this issue–maybe it’s a thread that will be picked up on later?).

The most generous reading I can conceive for this scene is that Messina intends us to disagree with Sandra and find her unsympathetic as a result while seeing Noah, who at that point is obviously intended to be our main character, as a more sympathetic contrast which will get us as comic book readers to connect to her. But Noah seems to entirely agree with Sandra based on the way Messina draws her, puts up almost no rebuke in dialogue, and had just provided terrible service to a group of customers.  Further, the scene in the comic shop continues after Noah’s departure and turns to her sexual if not necessarily romantic, preference. The shop owner gets involved in a way that feels very inappropriate given these are his employees (and especially given why he apparently hired the women in the first place), and in the end, Sandra comes off as the more sympathetic character in the exchange which undermines any attempt to make her unsympathetic earlier (assuming that was Messina’s intent).

3Keys #1 stumbles in another way as well, though it’s considerably less significant than the issue’s first two problems. About halfway through the issue, beginning during the action sequence, some dialogue bubbles use skull and s*** emojis in place of written dialogue. Far from being clever, it feels like the comic is trying to turn itself into a meme.

The one place where 3Keys #1 is successful–the only place–is the art. Messina draws expressive characters. I never connected with the characters as a result of the narrative, but they did look fun to be around. Messina also did a good job keeping them the focus of every panel. My eyes went straight to them. Part of this is the result of Messina (credited as Messiana but I believe that’s a misprint) and Alessandra Alexakis’s coloring. Noah (and later Dale) really pops, jumping off the page in every panel they’re in. I found myself missing them in panels that didn’t feature them. Ultimately the issue might have benefitted from creator Messina handling the art duties and passing the full script off to someone else (or at least getting a writing partner).

Suffice it to say that introducing your main character in a scene that derides your audience with an ugly stereotype seems like a bad way to win that audience over. Perhaps if the remainder of 3Keys #1 was more impressive I might have moved off that scene. But the issue never recovered, and I can’t find enough positive qualities to recommend it.