8 BILLION GENIES #1: Everyone Make a Wish… 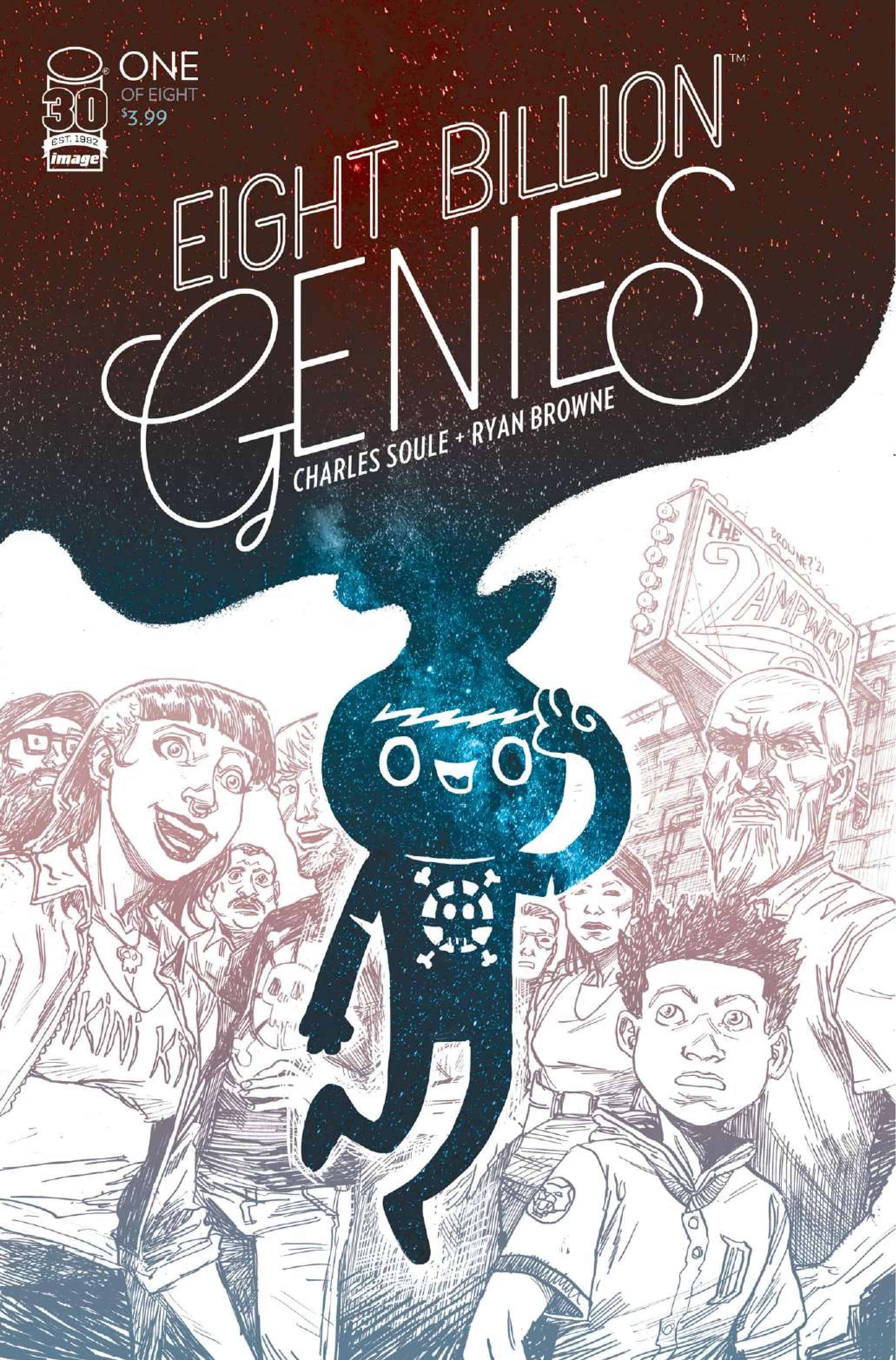 If you had one wish…what would you wish for? Now, what if everyone else had one wish too? At exactly the same moment, everyone on earth gets a genie and one wish. All hell breaks loose, because well 8 MILLION GENIES is a hell of a lot of wishes and human beings well...you get the picture.

It’s a normal day at the Lampwick bar and grill in Michigan…that is until the genies show up. Charles Soule, artist Ryan Browne and letterer Chris Crank take a theme that I think that every single person has contemplated or talked with friends about at some point in their lives: What if you got one wish from a genie and you could wish for anything (except more wishes). Of course it would be pretty boring if it was just that, so Soule and the team up the stakes and give every single person on the planet, 8 Billion for the sake of this story, a genie to do just that. As you can imagine mayhem is about to ensue. 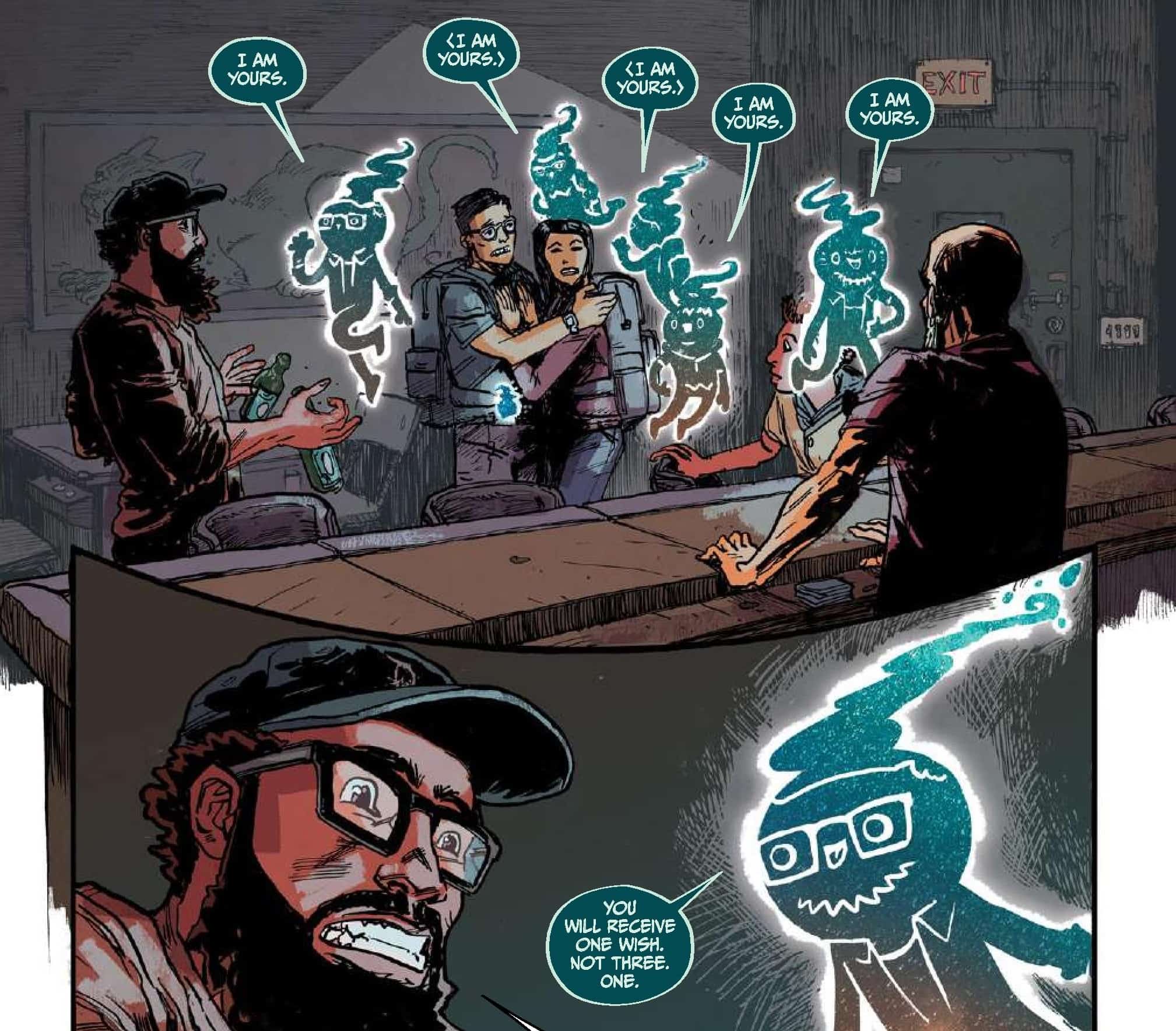 Soule does an excellent job of opening the issue as a slice of everyday life piece and introducing us to the characters who find themselves at the aforementioned location of the Lampwick bar ( a clever and significant name when you consider the traditional history of genies..) it’s a neighbourhood bar and grill with regulars, a band setting up for a gig later, some tourists, the bar owner and a regular and the regulars young son who’s come to check on his inebriated dad. Then the genies show up and Soule and Browne let rip, not only with exactly the kind of chaos you would expect from having 8 million genies show up to grant wishes but also exploring the absolute fickle nature of human beings and the idea of what we think we want and how that can conflict what others want. Soule uses the premise of a wish that basically protects the Lampwick and everything in it from wishes made outside the grill, cementing it as a safety point in the story. There’s a good mix of human drama, fantasy melodrama, humor and a sense of menace from the genie’s themselves that makes for a really intriguing start to the series that makes you want to know where it’s going next.

The art from Ryan Browne is excellent. The style carefully balances a cartoonish element with really great detail and expressiveness from the characters in the book. No one looks generic, facial expressions match what’s being said and the layout and paneling is easy to follow. Browne and assistant colorist Kevin Knipstein then throw in the fantastical element of the genies, colored in the style of a multicolored starfield and very much 2d to the way the human world is drawn. Its a striking contrast that drives home the weirdness of what’s happening. Browne also does some fantastic splashes and the one toward the end of the book showing the chaos of the wish fulfillment outside the bar is my favorite as you get to see wishes you may have made yourself once  upon a time come to life on the page in his style . The lettering from Chris Crank is rock solid and clean with some superb lettering sound effects too.

8 Billion Genies #1 takes a concept we are all familiar with, puts it on steroids and gives it a case of red bull and this is the result...in a good way! It balances a well written character centric script with humor and the over the top fantasy element. The art is vivid, detailed and engaging across the board and it does exactly enough to want you to know what happens next!

8 BILLION GENIES #1: Everyone Make a Wish…