A Righteous Thirst For Vengeance #4: How Far Would You Go?

A Righteous Thirst For Vengeance #4 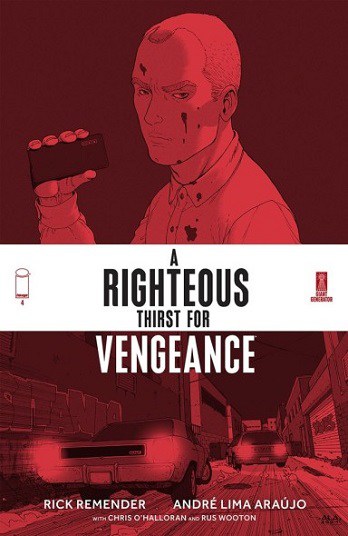 How far would you go to protect a stranger and her child? The race to get out of town narrows as a jackal goes on the prowl for Sonny and Neva.

A Righteous Thirst for Vengeance #4 does not take a breather from the high speed action that we were left off in the previous issue. However this time it looks like the police are involved, only adding to our main characters’ problems.

There are still many unanswered questions in this series that issue #4 has not covered yet. We are still wondering why one of the characters became a target of the hitmen. We also don’t know what our other main character’s motives were to save her, even though he was sent to kill her as well. The pacing of this story is everywhere, but not in a bad way. As some of our questions are still unanswered four issues in, there’s fast action from page to page. The story is moving ahead quickly, but taking it’s time to go back and answer the questions regarding the character’s backgrounds. This pacing is really enjoyable and keeps me wanting to read more of this series.

Aside from the pacing, I love the way Rick Remender makes use of silent panels. It’s a great collaboration with artist André Lima Araújo. These panels provide a perfect narrative without words. This makes the story a quicker read but adds to that high paced action I was describing before. A warning though to readers is that in previous issues some of these silent panels were very gory. This issue was a little lighter on the gore however there’s still some scenes that can be unsettling.

Araújo’s art really shines in this issue. I feel his art sets a nerve-racking tone. It’s almost like you can feel the characters shaking with adrenaline and fear. When one of the main characters is about to pull the trigger of his gun, you can almost feel the hesitation without any dialogue. Araújo is able to make the characters feel real just by the visuals itself.

I also feel Chris O’Halloran’s colors work really well in this issue and series. His colors are simple which I feel highlights these silent panels. There are no bright colors to distract you from the intense scenes going on. Everything feels dull and dark which also adds to the suspense of this comic.

As I’ve stated before there is some gore in this series that for someone with a weak stomach like me can have a difficult time reading. Luckily this issue was a little easier on the gore. Gruesome scenes aside, I really am enjoying this story. In every issue we get a little more questions answer and more questions raised. The silent panels really drive this story, highlighting how well this creative team works together.

A Righteous Thirst For Vengeance #4: How Far Would You Go?