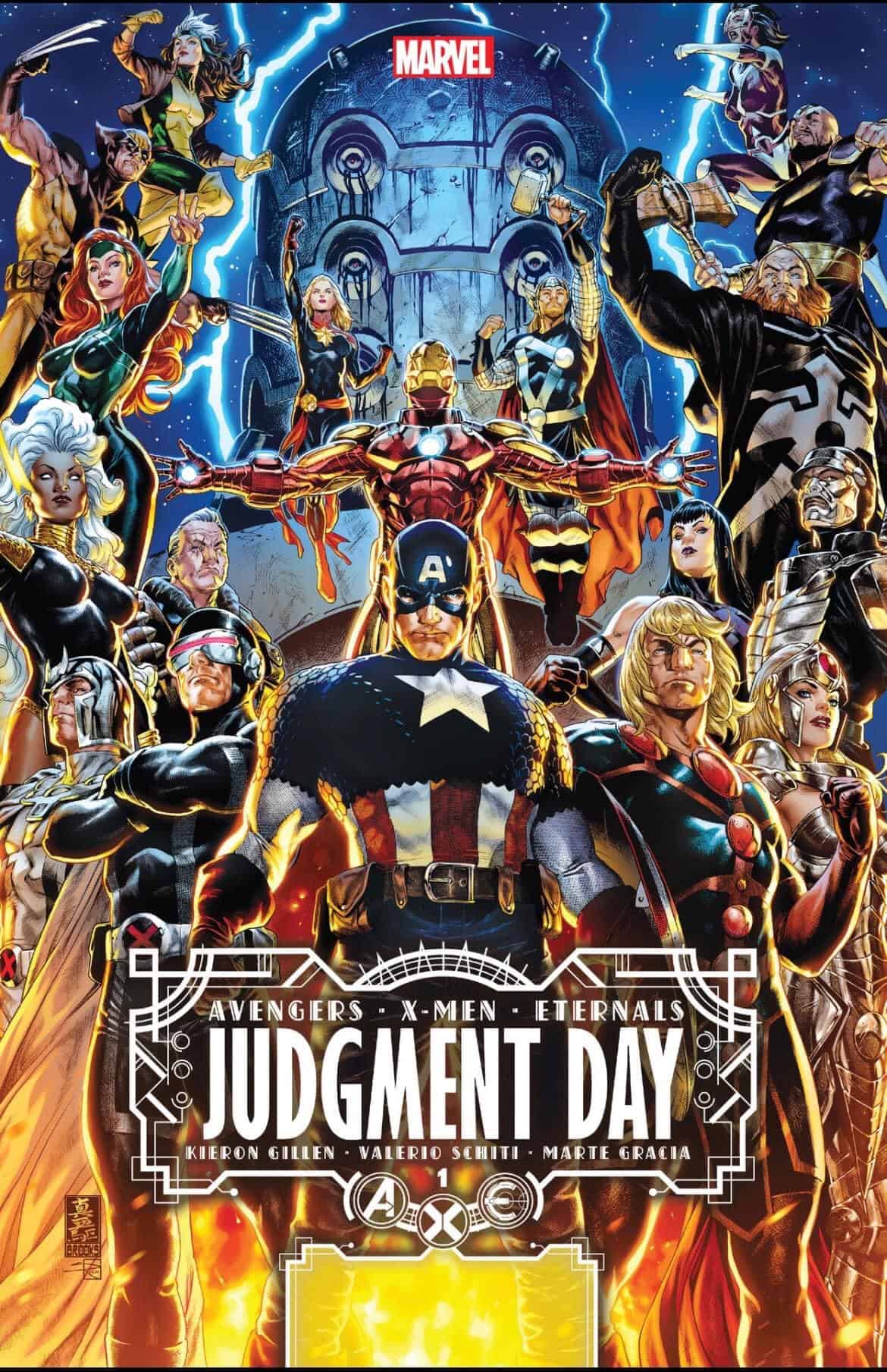 IN THE LAND OF THE RIGHTEOUS...The X-Men claim they’re the planet's new gods. The Eternals know that position is already filled. The Avengers are about to realize exactly how many secrets their so-called friends have kept from them. Years of tension lead to a volcanic eruption as two worlds burn. Who has leaked the X-Men’s secrets to their latest foes? Why is Tony Stark abducting an old friend? And who stands in judgment over the whole world? Judgment Day from Kieron Gillen and Valerio Schiti is the apocalyptic emotional event to define the summer.

After last week’s prequel Kieron Gillen is ready to take the opening salvo, and baby, it’s a big one. Gillen has been masterfully crafting this story basically from scratch, not only giving the Eternals their own specific niche in the very crowded world of Marvel teams, but creating an entire society from it, too. What Gillen has done is what Marvel should have done with the Inhumans years ago, instead of trying to shoehorn them into a role that they just weren’t cut out for. There’s real pathos and ethos with the Eternals, and given time, they could become an essential part of the Marvel universe. Sure, the ongoing was a tad slow, but that’s what happens when you’re world building something that has less than seventy-five issues in material in the nearly fifty years of publication, so what he’s done over the last year and a half has been nothing short of miraculous.

Druig’s plot is paper thin, but it’s very reminiscent for reasons we see countries like the United States get us into countless pointless wars, and policing the world to protect it from other governments that won’t be as financially beneficial to other countries regimes. Now, Druig is clearly in over his head, but he thinks he’s the smartest man in the room, so seeing that his own hubris bring his downfall is pretty much guaranteed at point – but it’s the journey there to see him fall that’s going to make it worth it. Sersi’s captured at the beginning of the issue, and it’s here where she learns that something’s brewing, it’s big, and with her, and the other self-imposed Eternal exiles, they’ve been unaware of all the plotting Druig’s been doing since rising to the level of Prime Eternal. What that means for them, and the rest of their friends/allies in the Eternals moving forward could provide storytelling material for some time to come.

Druig’s two-pronged assault is not only savage, but swift, as it all seems to happen within an hour’s time, as he unleashes forces that could prove to be too much for him to control, which is something I’m pretty sure is going to happen, but his fall from grace is going to be a heck of a show. There’s also something brewing with Uranos, and from the way Gillen has been building him up to the point that he could become a Thanos-level threat, which I’m totally here for. Having more threats that can headline an event is something that just isn’t developed like they used to, but luckily that’s not the case anymore. Gillen’s been building up a whole mythology around the Eternals, and Uranos could be the next big bad. This looks like it’s going to be one heck of a good summer romp.

Joining Gillen is up and coming superstar Valerio Schiti, who has made his indelible mark on the Marvel universe, and even served as artist on the best event I’ve read in years, Empyre (shut up if you didn’t love it. I don’t want to hear it), so having him here is just an absolute joy for me. As much as I loved Esad Ribic’s take on the Eternals, Schiti is just the right artist for this job. Ribic gives you ephemeral and mythical stories, things you’d see in the Lord of the Rings adaptations, where Schiti is giving us hardcore sci-fi/superhero fare that just explodes with just how immense this story is. Schiti gave us the stars in Empyre, what can we expect from him here?

Gillen’s setting up so many chess pieces here, and creating a threat in not only Druig, but Uranos, that could become a constant threat in the heroes lives, not just the Eternals. He’s also cementing just how important the Eternals are to the Earth, and to the rest of the Marvel universe. Will the Eternals and mutants become constant enemies? I hope not. The heroes vs. heroes thing has been done to death. Luckily I have faith in Gillen to give us something deeper than that.