A.X.E. Judgment Day #2: You don’t have to stay forever I will understand… 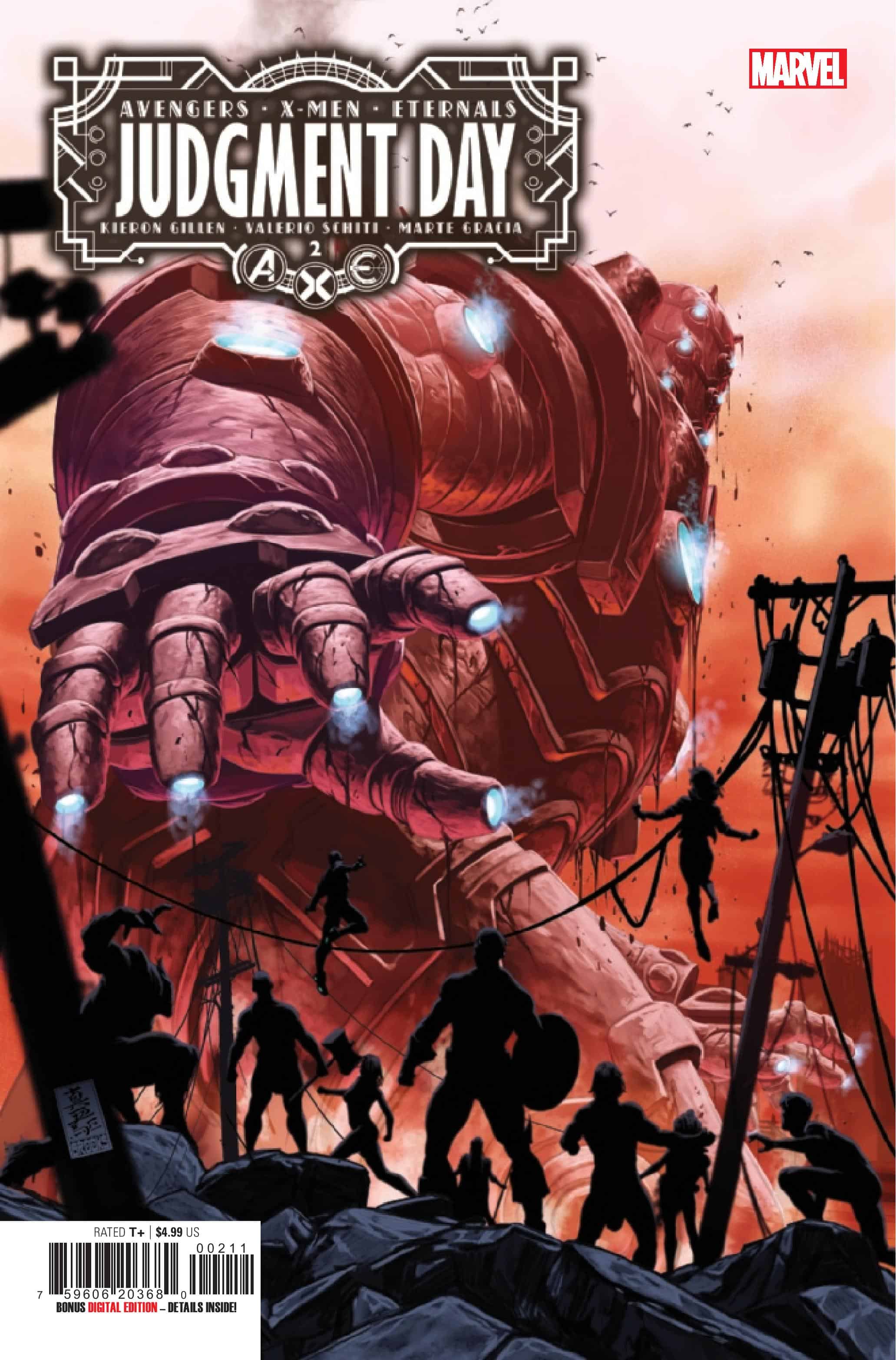 ...THE WICKED WILL BE PUT TO DEATH! As the world shakes, an unlikely group of heroes and less-than-heroes gather to find a peaceful solution. Sadly, the best laid plans of man, mutant and Eternal oft go awry…

It’s the second issue of this mini, and we’re getting big ideas from Kieron Gillen, and we see what those of the HEX are capable of. These huge monoliths are attacking Genosha, and the casualties are piling up on both sides. The resurrection queues on both sides seem to be working overtime. We don’t really see any of the ramifications of the events from last issue (you’ll have to read this month’s issues of Immortal X-Men and X-Men read to find out), and we get a little more about the 6 people who were introduced to us in the last issue. Unfortunately we’re still not sure of their importance (well, 5 of them were still not sure of by the end of this issue), and the Eternals, Avengers, and Sinister continue their efforts to revive the Celestial Host that the Avengers have called home since 2018.

So the first issue of this event was like a grenade going off. It was chaotic and kinetic, a total slap to the senses, making your head turn from page to page to drink it all in. There’s also the big to-do of a cliffhanger that seems like it might be just a tad too soon, but who knows? Unfortunately this issue, while kinetic, was a tad too…chaotic for me. The story jumps from plot point to plot point, with little room to breathe. While it was a definite positive for the first issue, it didn’t have the same effect this time. It just made it for a harder issue to focus on. Then there’s the HEX. These creatures are so immense, their presence screams blockbuster. Gillen is a writer who has more hits than misses, and I’m willing to give this event more time to foment.

Onto the art, what else can one say about Valerio Schiti that hasn’t been said before? The man is quite easily one of the biggest superstar artists in the field today. This isn’t Schiti’s first event title. He gave the world a touch of the cosmic in the 2020 storyline Empyre (which I still insist that it’s been the best event since Secret Wars). Every panel just drips with energy. Every character just carried so much personality. There wasn’t any wasted space, every panel commanded you to pick through every scene, and gaze over it like a masterpiece. Schiti is one of those artists that can take a script, and make its message that much more poignant. He has the makings to become this generation’s Big John Buscema. Wherever he goes from here, it needs to be flagship big.

Kieron Gillen and Valerio Schiti are giving us a popcorn big blockbuster with this mini, but there’s a little hiccups that detract from the rest of the story. It kinda feels like Marvel should have tapped Al Ewing to co-plot this event. Even with these critiques, it’s still nice to see the Eternals elevated status in the Marvel Universe.

A.X.E. Judgment Day #2: You don’t have to stay forever I will understand…