A.X.E. Judgment Day #3: Why Does It Feel Like Somebody’s Watching me? 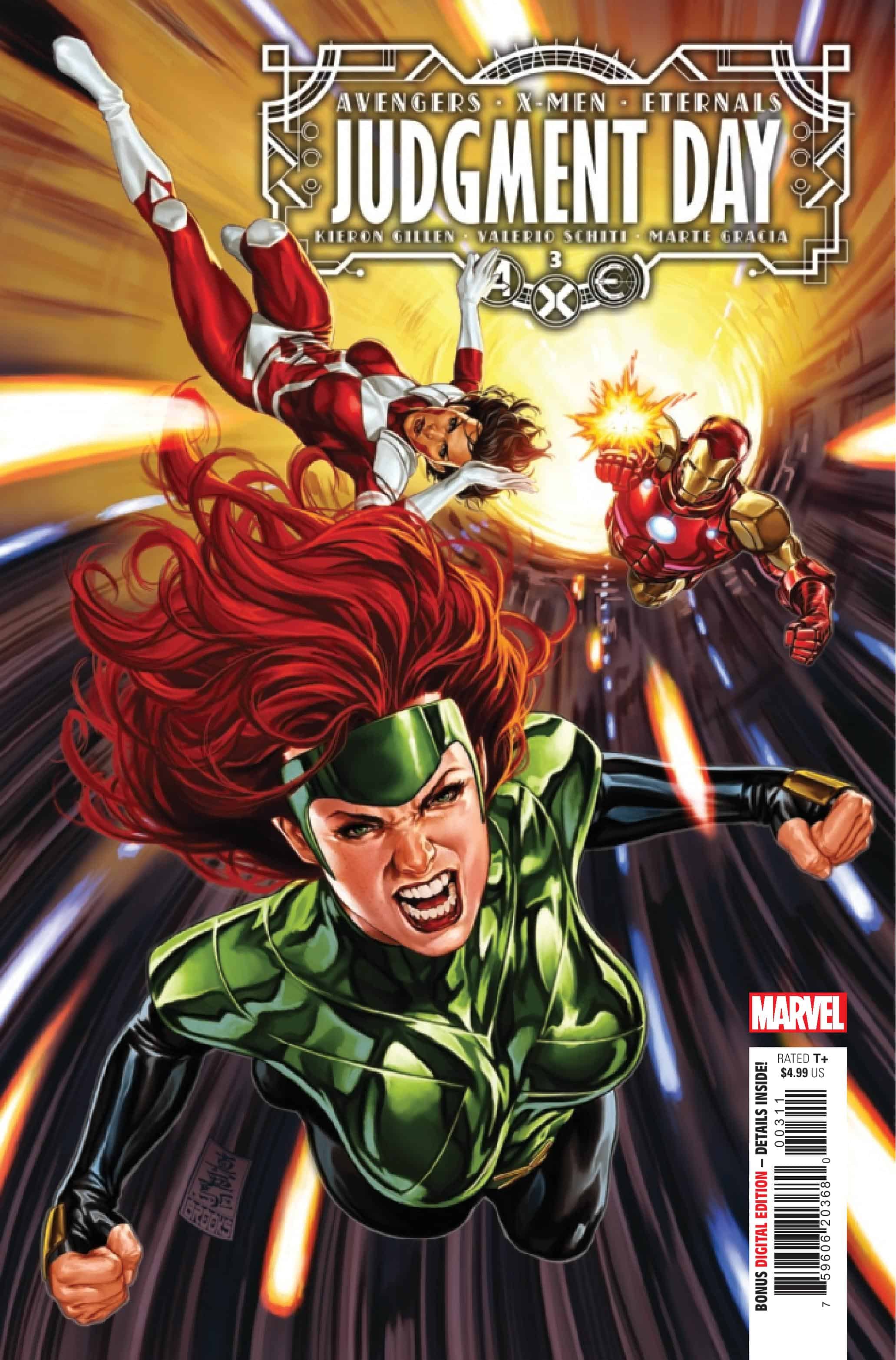 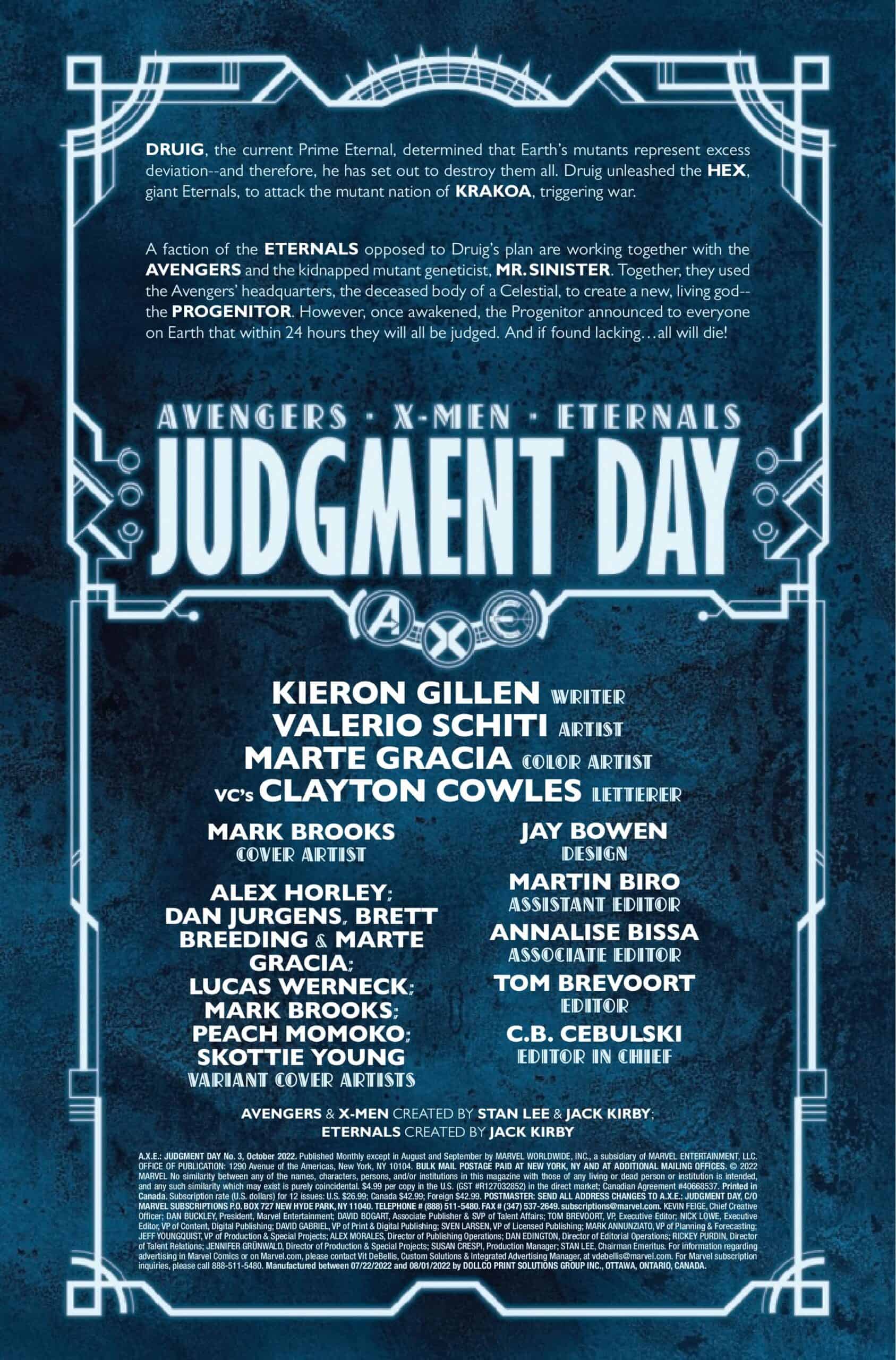 We’re back with this newest chapter in the ongoing war between the Eternals, and the Mutants, with the Avengers stuck in the middle. Will these three opposing factions be able to put their differences aside to stop the impending judgment on Earth before the newly zombified Celestial/Avengers mountain god can bring his judgment down upon the Earth. Plus there’s a twist that will knock you for a loop, but it’s easily missable, so keep those eyes peeled! It’s a high stakes, high action rocking story that only could be told in the Mighty Marvel manner, true believers, so let’s go…

It’s chapter three, and the whole world is in disarray over what’s going on between the Eternals and the Mutants, with neither faction really gaining ground at this point. Well, not since the Eternals first struck at Krakoa and Arakko, decimating loads of mutants in the process. With the Five secured, the X-Men do what X-Men do best, kick @$$ & take names, but with an enemy like the Eternals, their usual modus operandi might now be what’s needed here. Sure, we’ve got mutants who could crack the world in two, if needed, but the Eternals have been around since the beginning of time, and are far more potent than the average mutant, so it’s a pretty tight race that’s going on here.

Gillen’s setting up something big, and like with Toby, he’s teasing how important those 6 humans are, with one already being dead. Could these be the humans who will revive the Inhumans from the HEX? Well, we know one was, so it’s safe to assume so are the rest. But that wouldn’t be quite as entertaining, or a surprise twist, because it just doesn’t make sense. Or it could be just this, and Gillen’s giving us something we haven’t seen in decades. Giving these once faceless victims, and making them a more, well rounded people. They’re more than just a face, and a statistic. They have hopes, dreams, loves, losses, and heartbreak just like the main characters in our story, and this is something that just really speaks to me, as both a fan, and comic creator.

I have to ask myself with each new issue, and project he’s on, how can Valerio Schiti possibly outdo himself this time? And more often than not, he does. Just look at the trajectory he’s made since coming to Marvel. While he was always incredibly talented, his growth from Sif to Mighty Avengers, to Iron Man, to Empyre to this, and you can see why Marvel keeps putting him on these high profile gigs. It’s just a masterclass in greatness. I said it last issue, but the same rings true here, this talent is meant for flagship status.

There’s a lot of plates, and a lot of characters that are incredibly busy, so it’s easy to get lost, but even with everything going on, I do know this: Gillen excels at character development, and the growth we’re seeing here with the parties involved just goes to show that with the right creators, you can build a franchise that speaks to any type of fan out there. I’m sad to see Gillen’s arc with the Eternals ending after this, but hopefully this isn’t the last we see of them.

A.X.E. Judgment Day #3: Why Does It Feel Like Somebody’s Watching Me?