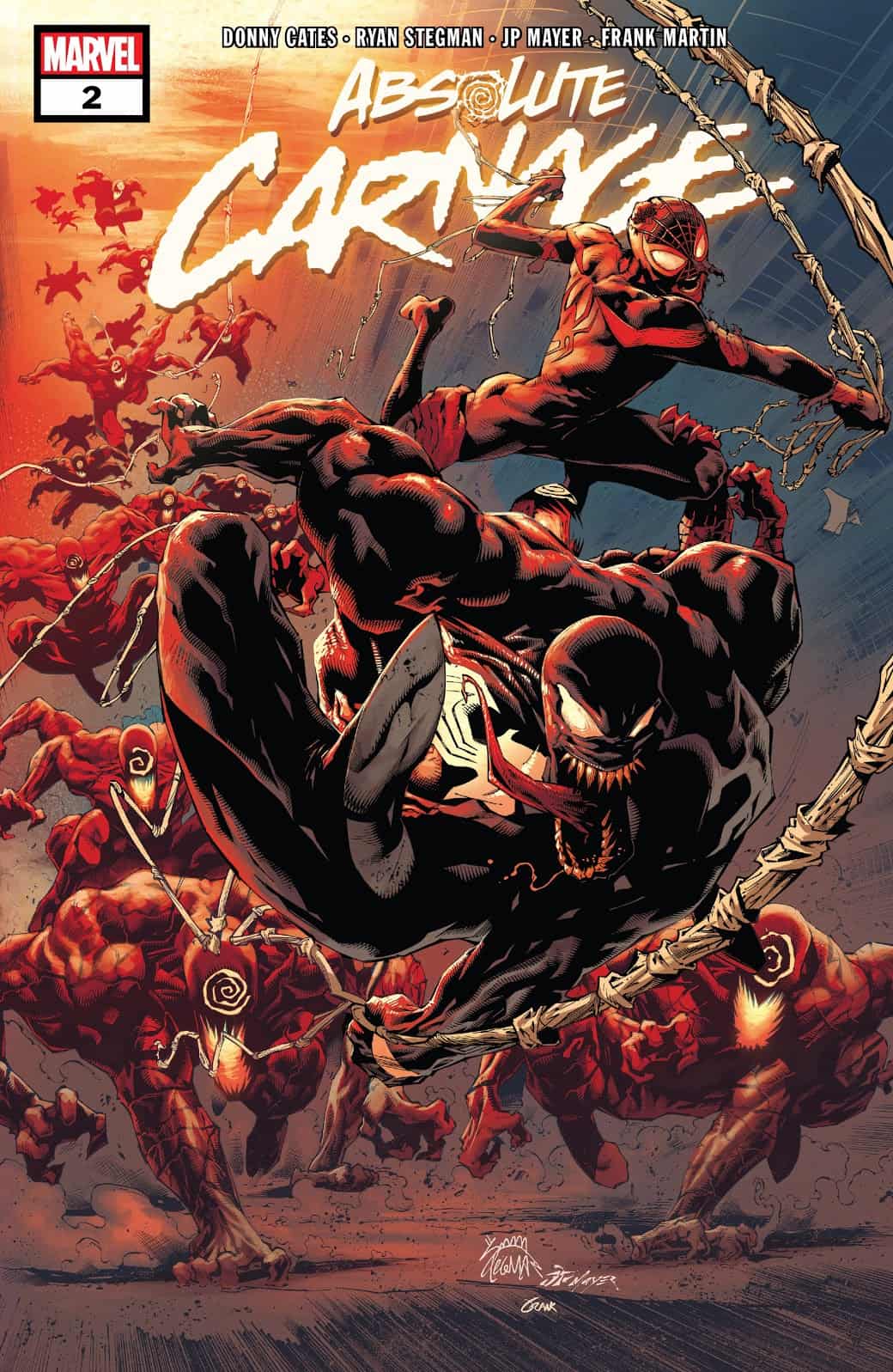 After the terrifying conclusion of Absolute Carnage #1, a new player is on the board, and it’s not who you’d expect! Barely able to escape with their lives, Spider-Man and Venom have no choice but to drag a slew of other heroes into Carnage’s crosshairs. Worse yet, Carnage’s rampage through New York City claims an unexpected piece of collateral damage…and there’s nothing Venom or anyone can do to stop it! 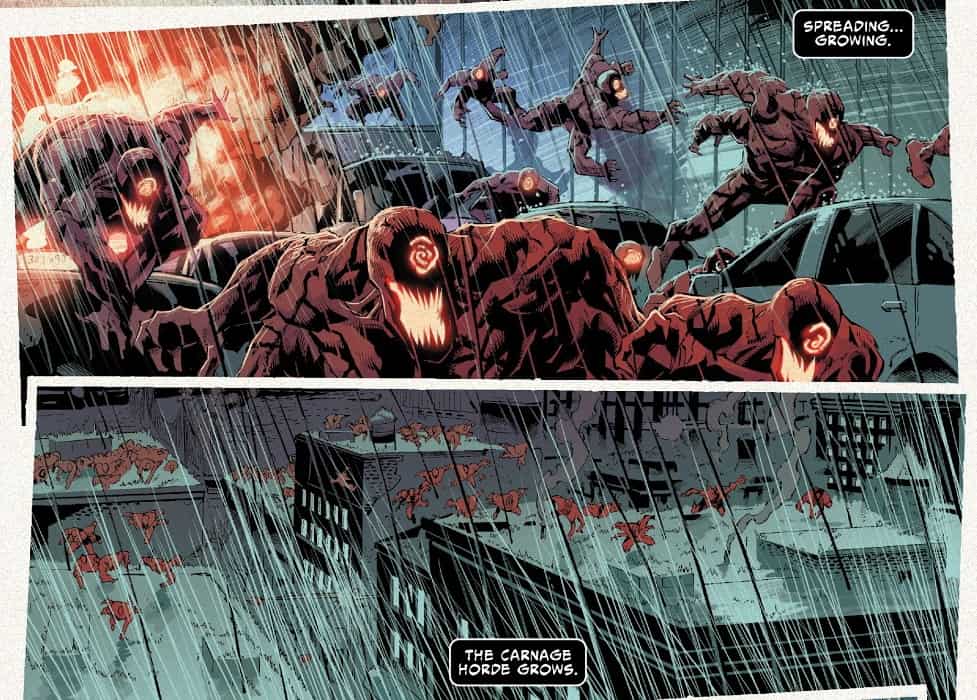 This is a comic event that was basically written and illustrated specifically for me… equal parts horror and superhero action, including not only two of my favorite heroes (Spider-Man and Venom) but my all-time favorite supervillain, Carnage, now with a boost to his already incredible power as well as an army of symbiote drones to do his bidding. On top of all that, just two issues (and about half a dozen tie-ins) in and this event has already shown itself to be top notch in terms of writing and art. 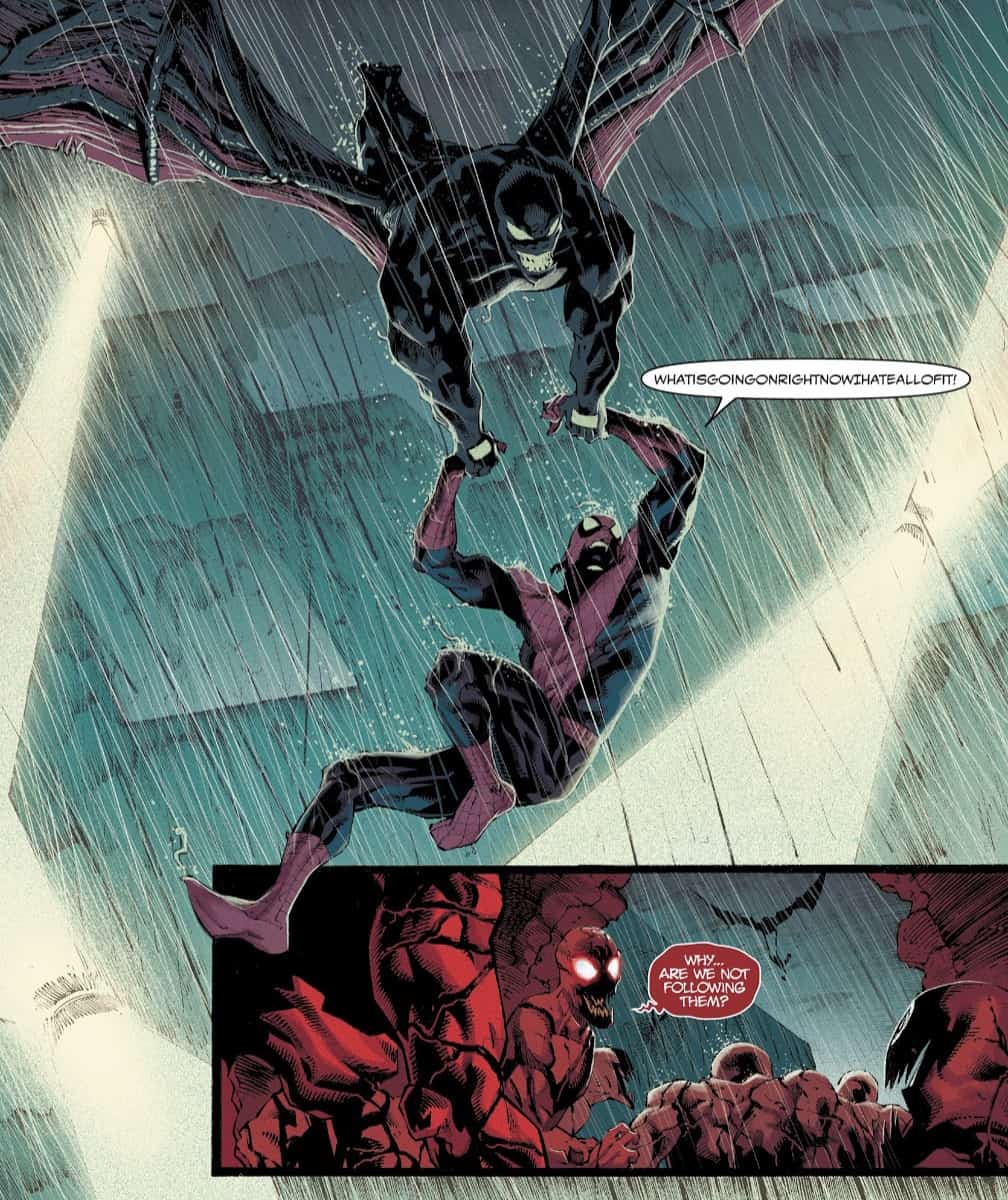 Cates has managed to make the already terrifying Carnage an even more formidable evil than ever before. While keeping Cletus’ lust for destruction and mayhem, there is an added element of logic and planning. Where Carnage was once a creature of pure chaos, acting on impulse, he is now more cold and calculating… this is a force of destruction with a plan and that is a terrifying thing for the heroes of New York. 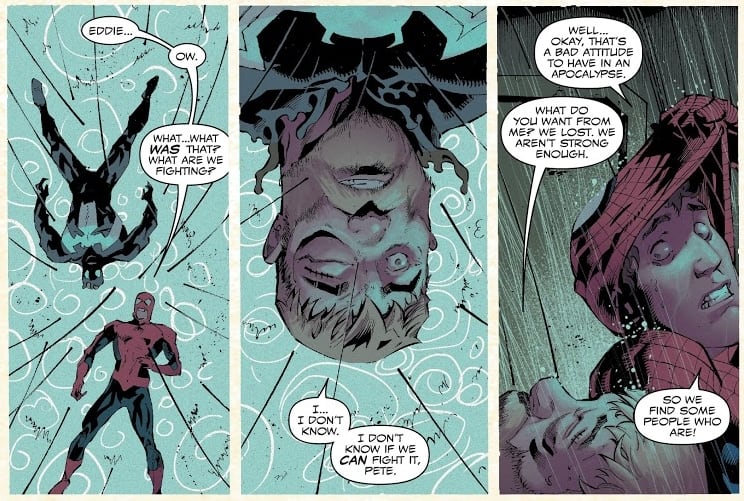 The art for this series has done an exceptional job of capturing the tone of the story, dark enough to capture the horror elements brilliantly yet not so dark as to make the superhero aspects feel awkward or out of place. The chaos of carnage and his horde is captured in such a way to display a hectic and out of control atmosphere while not becoming confusing or hard to follow. There is even a brilliant two-page splash that hints at the events going on in the tie-in issues while not getting in so deep as to confuse those only following the main series. 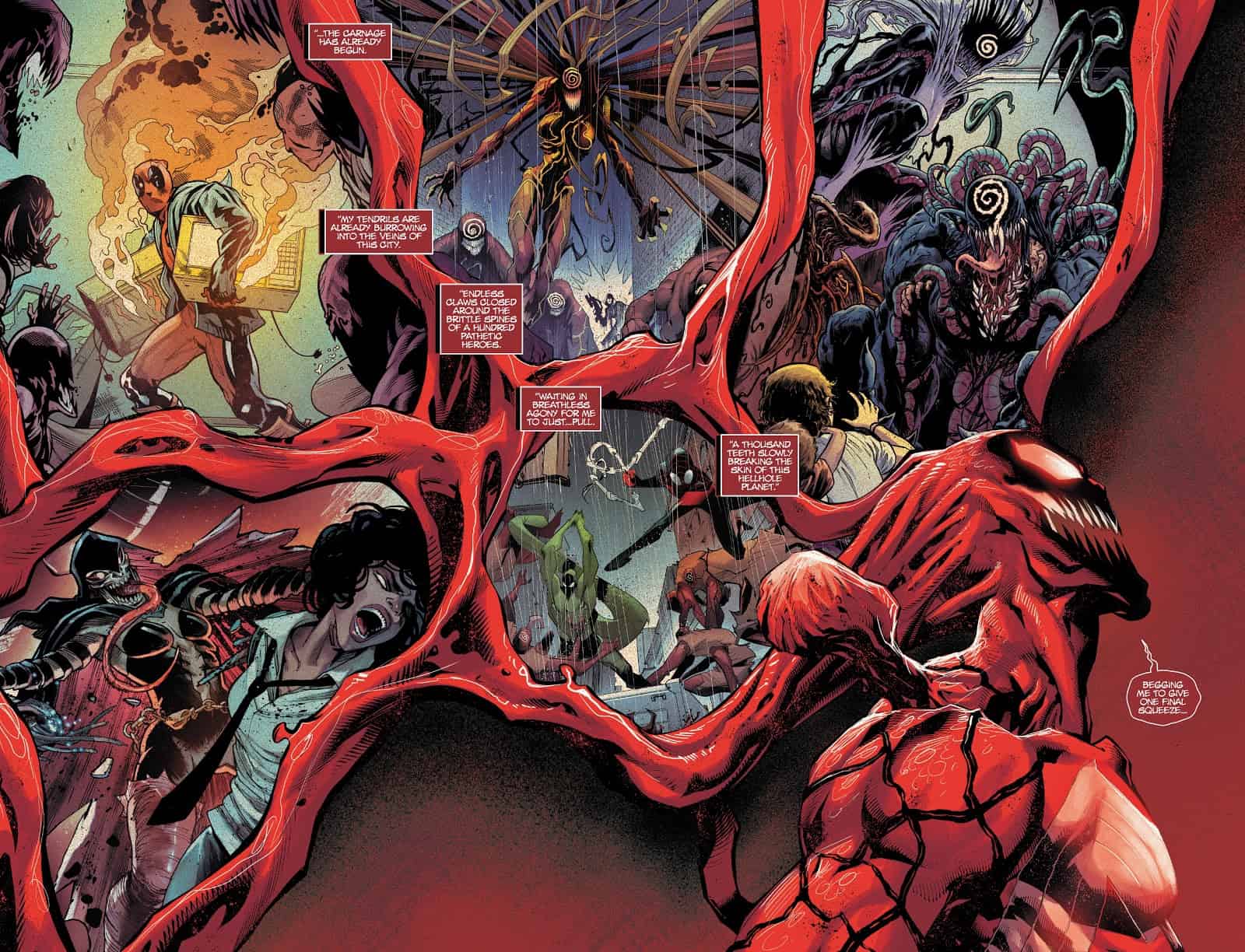 If this event keeps up the momentum and quality of work, it is sure to become one of my favorite comic events to date. Even with a clearly defined plan, you never know what to expect from Carnage and this series has kept me on the edge of my seat. 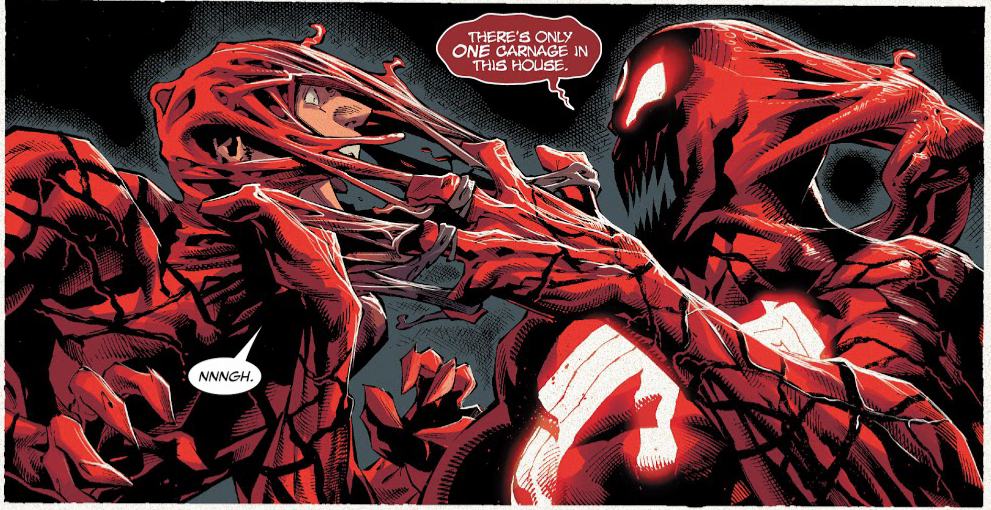 Another outstanding issue of horrific chaos mixed with superhero action. This event is building to be something great while adding depth to the mythos of Carnage. 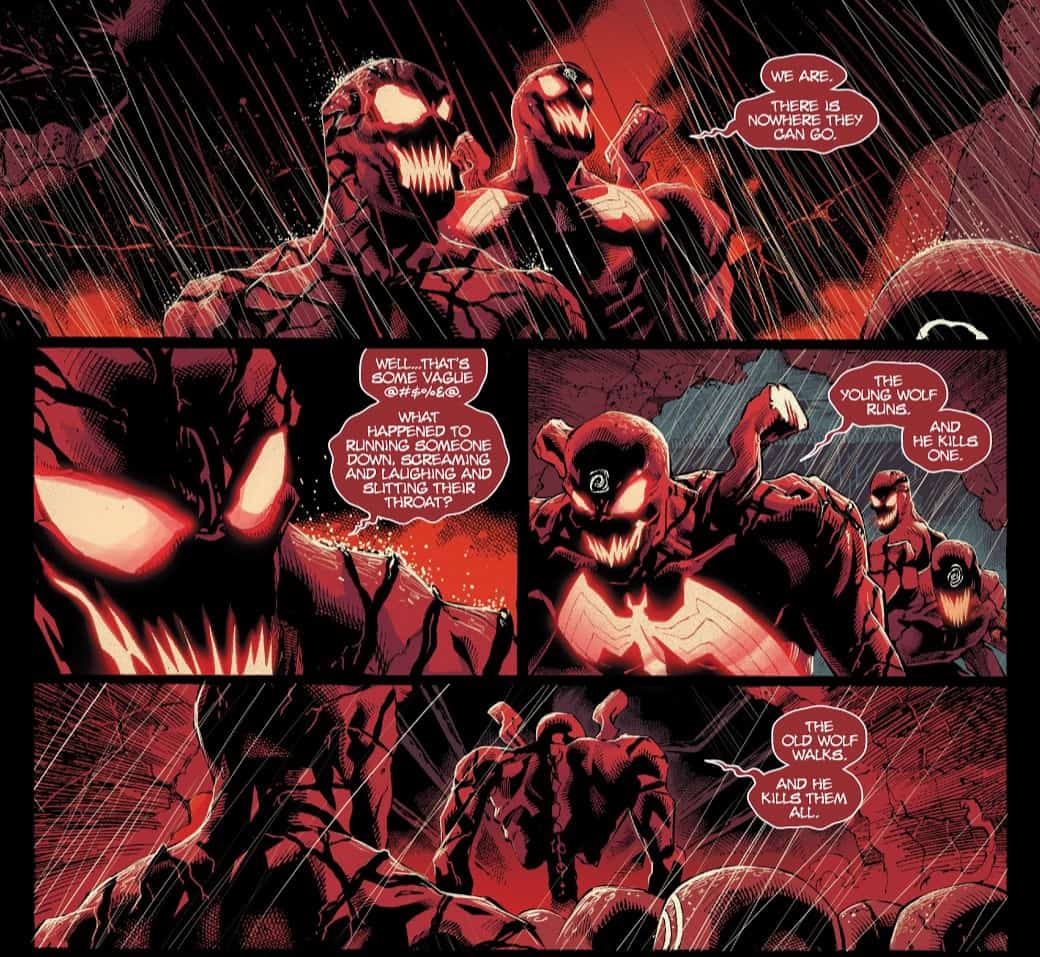