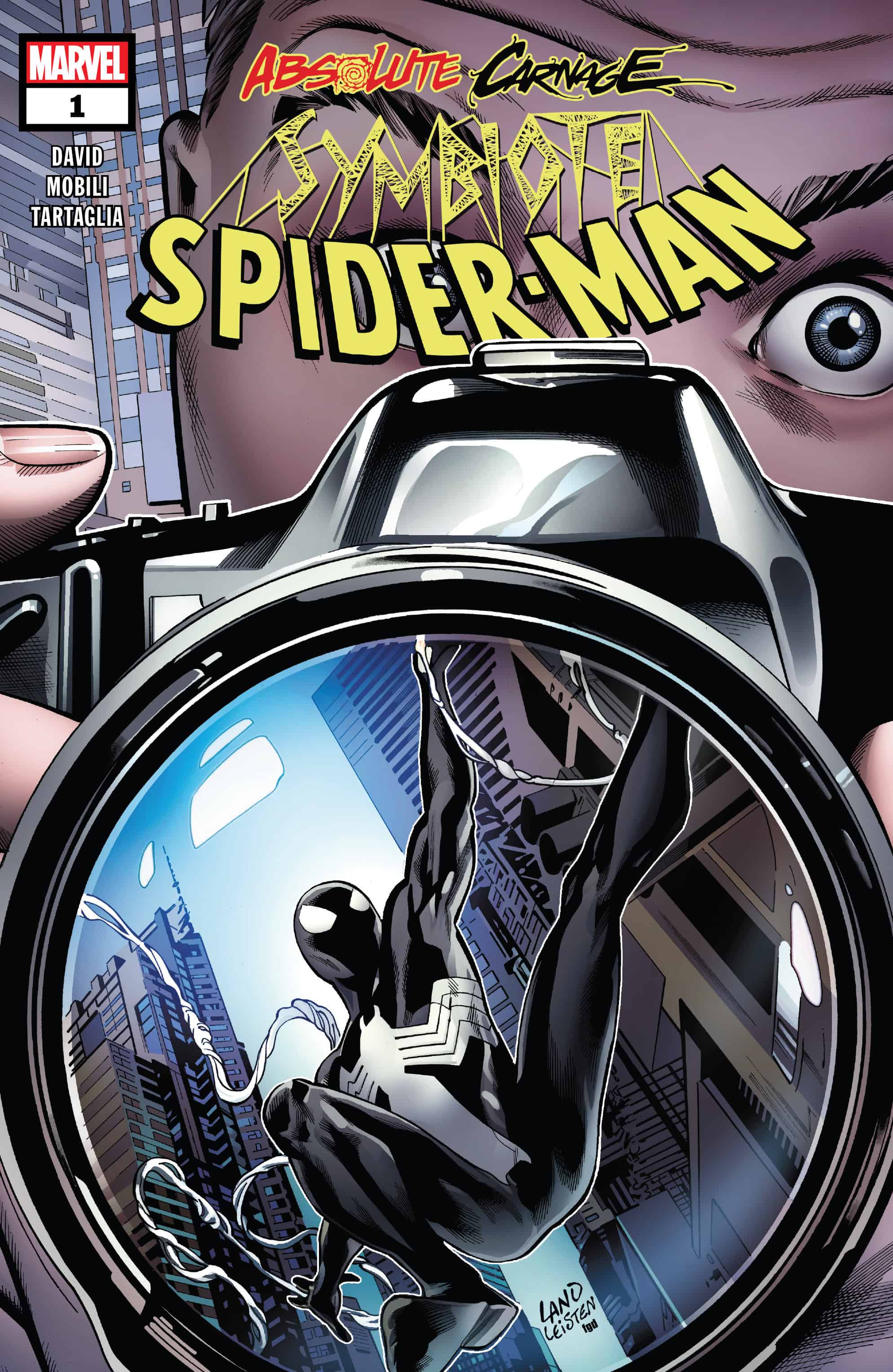 Back in the day, after Peter Parker first learned his swell new black costume was actually a symbiote, he frantically locked it away in Reed Richards' lab in the Baxter Building! But the suit broke free, and used an unwitting host to swing around with! 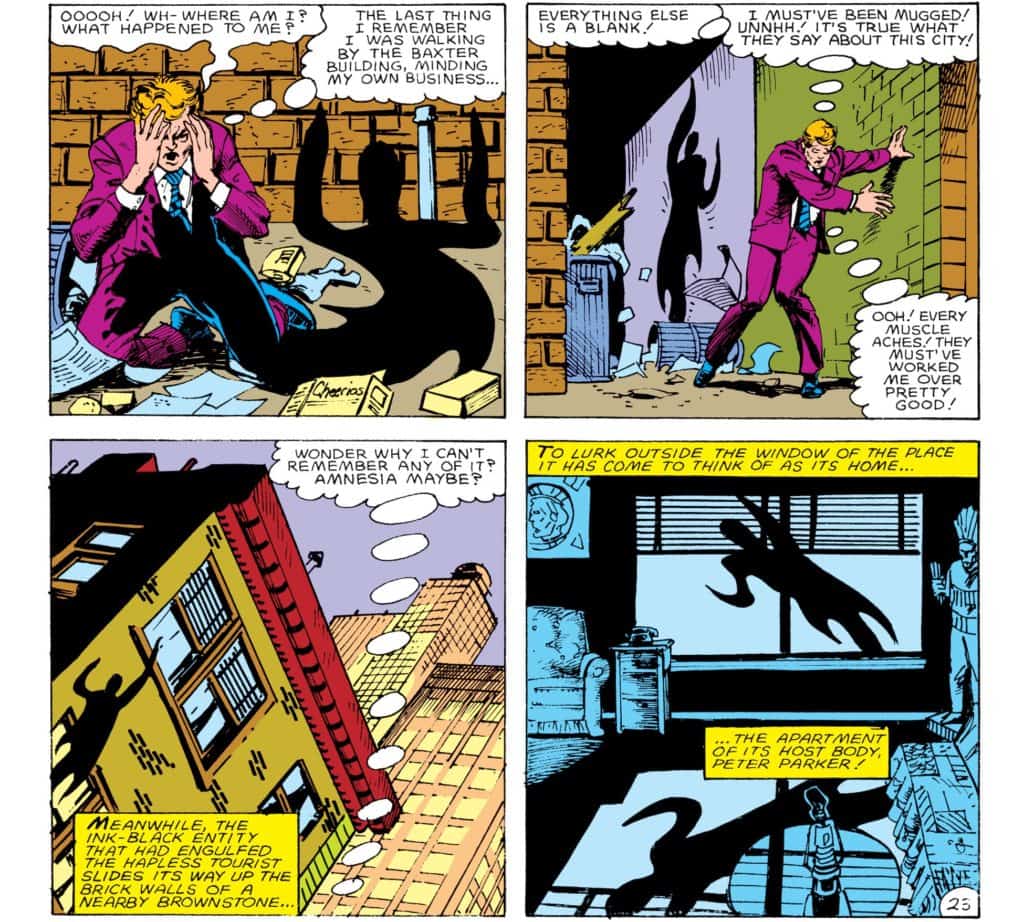 But.... whatever happened to that guy? We join Judge Leonard Elkhart today as he faces a parole board in jail... 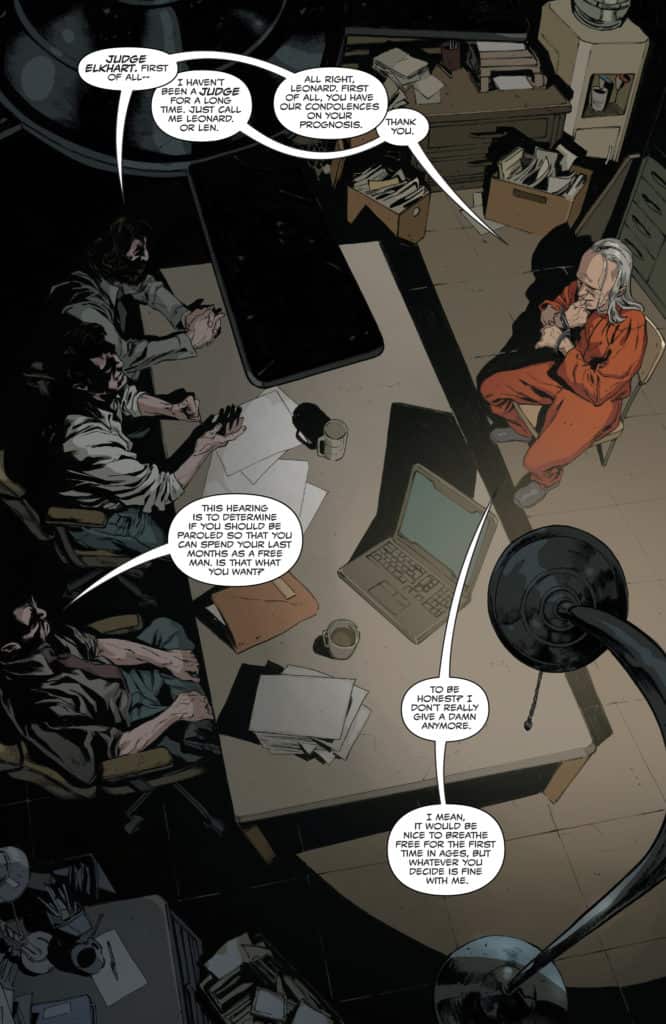 Elkhart recounts the sad story of how he wound up in prison. It started with a random encounter at a fast food joint... 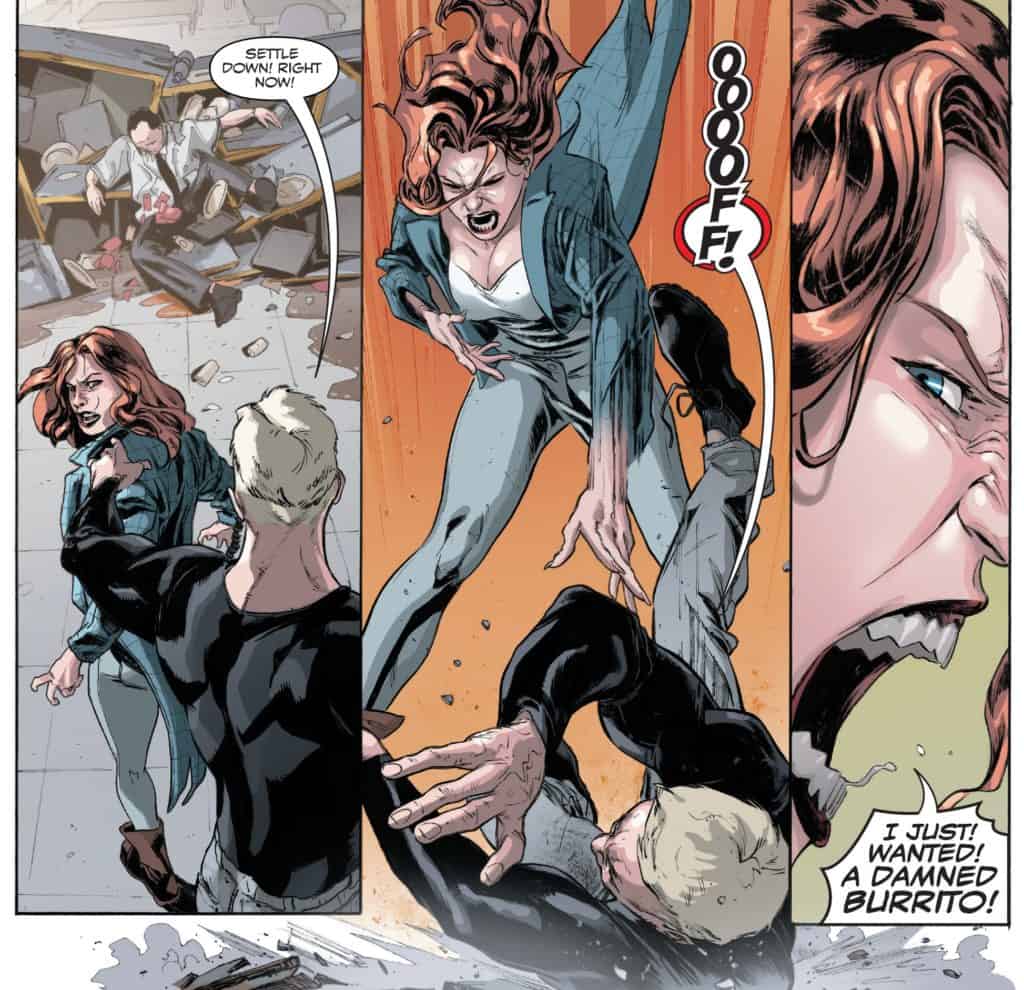 The crazy lady in question winds up in Judge Elkhart's court for a bail hearing the next day, where she gets a good look at him and tries to make the claim that he could have acted to prevent the encounter, which she also chooses to accept no responsibility for. 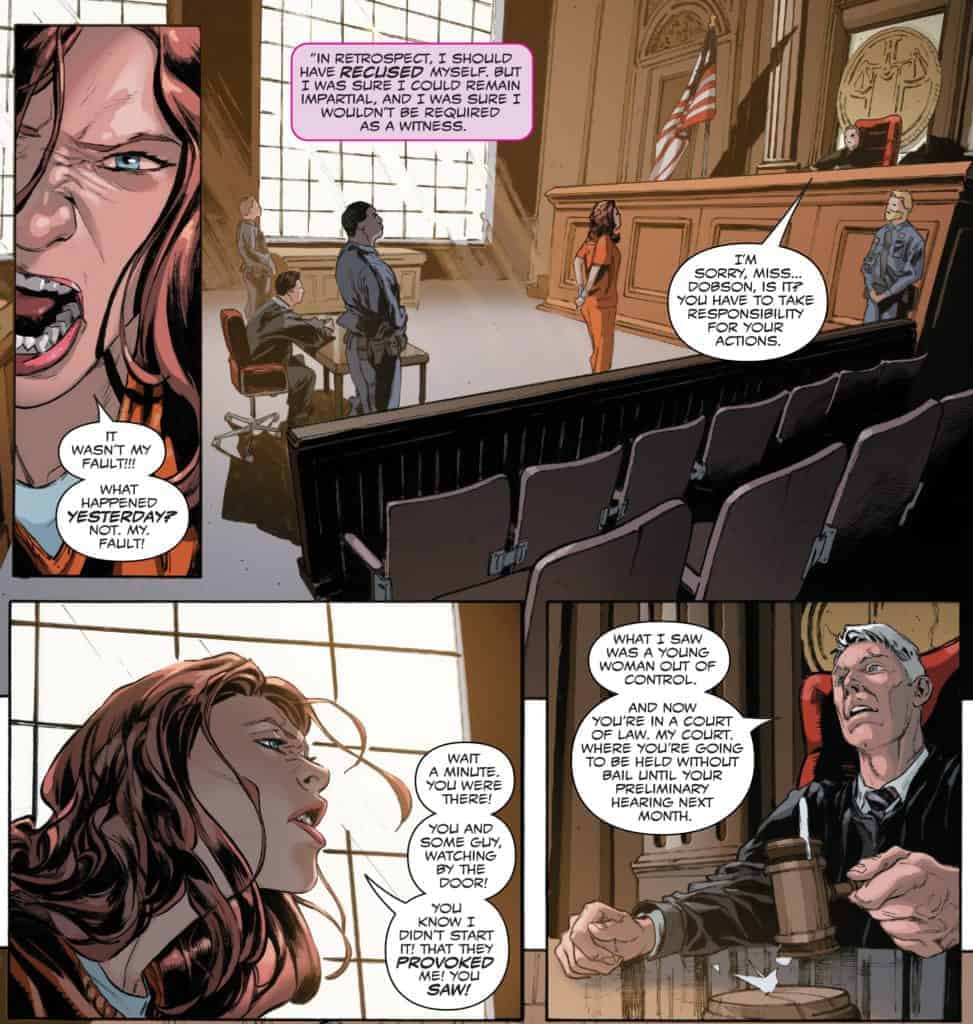 Ultimately, Elkhart holds her without bail. But she somehow escapes jail anyway, and manages to track him to his home - where her true identity is revealed! 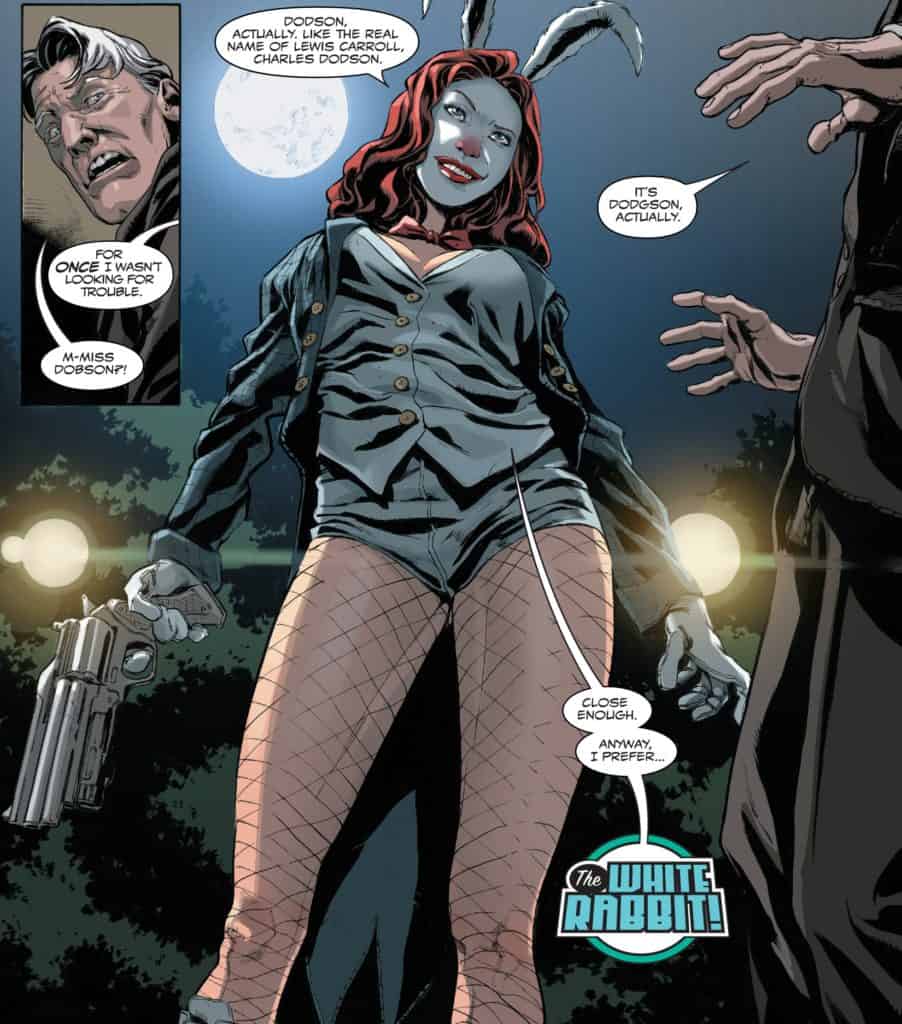 And that's when things take a turn for the tragic...

Absolute Carnage: Symbiote Spider-Man #1 is a tie-in comic that only event completists or fans of extremely obscure comics plot points could love. Mining a tiny bit of lore dating all the way back to Peter Parker, the Spectacular Spider-Man #99-100, writer Peter David catches up with a nobody who briefly wore the O.G. black costume for about seven panels waaaaaay back in 1985. Calling this an Absolute Carnage tie-in is a complete stretch until you remember this bit of trivia even exists, then for the purposes of completeness, it must be addressed. But did it need an entire oversized comic to do so? Is Judge Leonard Elkhart’s story so compelling that this story had to be told? Couldn’t it have been addressed in a tossed-off exposition box in the main book? Or is this a shameless cash grab?

There’s nothing inherently gripping about Leonard Elkhart’s tragic downfall, nor does it explicitly tie into the fact that he briefly wore the symbiote once. In fact, his story occurs completely without heed to the fact that he had the suit on for a time. In order to get from point A – his wearing the suit – to point B, when Carnage inevitably comes a-callin’ to claim that little bit of Klyntaar DNA hiding out in Elkhart’s spine, everything in between is completely unnecessary. Elkhart may as well have lived a boring suburban life with relatively little of interest ever happening to him. But, David has a story to tell, and even though it isn’t the most amazing thing you’ll ever read, it’s not bad by any means. Just unnecessary. That’s not a crime of David’s; he’s just managing the expectations set forth by his editors to deliver a story that capitalizes on the recent success of his Symbiote Spider-Man miniseries but also cashes in on Absolute Carnage. I can forgive that, even if – to reiterate – this entire comic is completely unnecessary in the grand scheme of things.

For the most part, the comic succeeds in its job, and tells a story about a man who wore the symbiote once for about twenty-seven seconds. It’s a bit of a surprise that we catch up to this Average Joe sitting in jail of all places, but almost all the pieces fit. There’s a pretty big plot hole that’s never addressed, namely, how did White Rabbit actually get out of jail to threaten Elkhart at home and ultimately cause the tragedy that pushed him over the edge and landed him in jail? The story doesn’t bother to address it; David just needs to move Rabbit from point A to point B so the story can continue moving forward. That’s sloppy storytelling, but it’s also a rare instance of it in this legendary creator’s career.

And then by the end of the comic, it was all for naught, because Carnage shows up on the scene and makes quick work of Elkhart, much to nobody’s surprise. So, again: did it matter? Was the story engaging enough to justify this oversized and overpriced comic’s existence? That’s ultimately for the reader to decide, but from this reviewer’s perspective, the answer is a resounding “No.” Good storytelling intentions from its author aside, there just isn’t enough meat on the bone here to justify readers shelling out their hard-earned money for it.

The art by Francisco Mobili is good, though, reminiscent of Szymon Kudranski’s recent Punisher work. His Carnage, coming in at the end of our little slice-of-life odyssey, has a particularly creepy menace to him. He also gives White Rabbit a sort of dangerous-yet-crazy vulnerability in her body language – not unlike Harley Quinn when she’s being played straight. It’s a good move. White Rabbit is one of those obscure villains that’s been shown a bit of the spotlight lately in recent issues of Amazing Spider-Man, where she’s been played as a well-intended but ultimately bad-at-the-job villainess. I’d like to see more of her – there’s a lot of potential there.

More filler than killer, Absolute Carnage: Symbiote Spider-Man #1 addresses a question no one was asking: "What happened to the guy who had the symbiote for a cool minute that one time?" It's a squarely mediocre read for what it is, but is for hardcore continuity cops and event completists only.