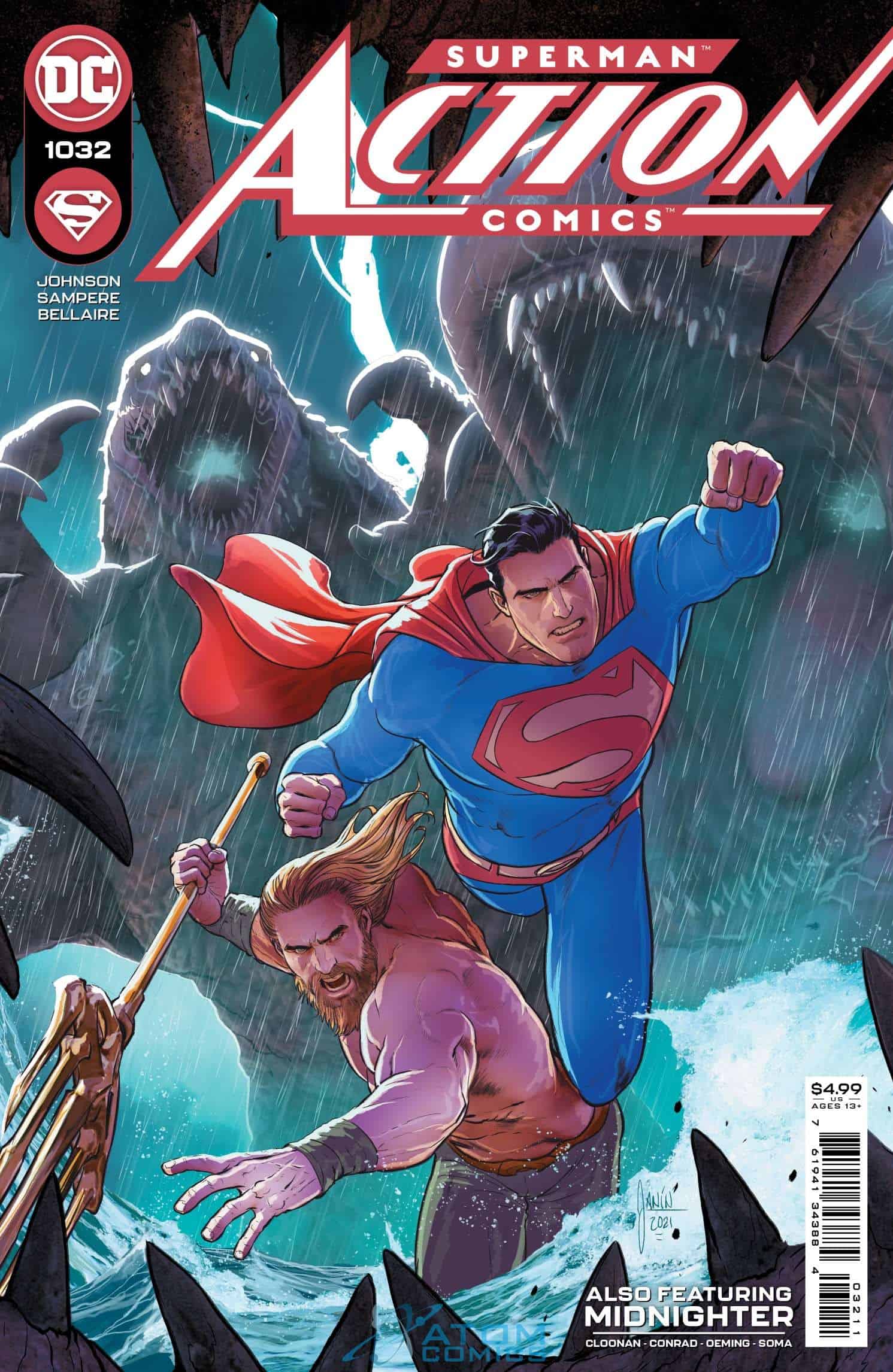 Having rescued a woman from a ruined Warzoon ship, Superman is now tasked with finding out who she is and… where she came from. Furthermore, the ship itself has landed in the ocean, making its ownership a point of contention between Atlantis and the surface world.

Oh, also there’s a kaiju in this issue. So.

And, in the Midnighter backup, the titular hero begins to close in on his prey, all while said prey unmasks ever more of his disturbing vision, and how far he’s willing to go to achieve it.

When last we left Metropolis… Clark and Jon Kent encountered a Warzoon fleet attacking another, larger, Warzoon ship. Inside they found refugees from Warworld in chains they refuse to remove… and at least one refugee who speaks a Kryptonian language that had died long before the planet itself. The damaged refugee ship eventually apart and tumbled into the ocean, where it was taken into custody by Atlantis.

That puts Clark right in the middle of several… situations.

The first is Thao-La, the refugee woman whose use of an ancient Kryptonian language was responsible for initially drawing him to the refugee vessel. Chained and terrified, branded with the symbol of the House of El, Thao-La is an enigma. Everything about her should be impossible from her language to her genetic structure and how it does or does not react to the yellow sun. In short, there’s a great deal to unpack.

But this is Clark, and though the mystery of her is a demanding one, he’s more concerned about forging a “human” connection with her and freeing her from her chains. Unfortunately, this is more difficult to do than say, as any attempt at unshackling sends her into a panic, and ultimately opens a whole new box of mysteries demanding to be deciphered, as well.

Meanwhile, Vulko and Atlantean scientist Maric investigate a strange fragment of… something found onboard the fallen Warzoon vessel. As it turns out that may have been a bad idea. Maybe an extremely bad idea, as Maric is negatively impacted, let’s say. And I’ll leave it at that.

There’s a lot going on in this issue – including two Justice Leaguers dropping in (or, in one case, being dropped in on), as well as some body horror and a freaking kaiju, not to mention the surprise that pops out in the last couple of pages of the lead story. It’s a lot to take in.

So, what’s remarkable to me is that, despite all this happening, nothing feels stilted, rushed or unnatural. Quite the contrary – the story builds like the pressure before a storm, or the first parts of a film that will inevitably lead to major cities being leveled with or without a happy ending in the aftermath. And as the pressure rises, we have moments like Clark’s visit to Gotham which is short, sweet and genius.

Speaking of perfect, the chemistry between Johnson’s writing, Sampere’s artwork and Lucas’s colors just makes reading Action Comics a pleasure month after month. Johnson’s Clark is an ideal man – not flawless no, but powerful and gentle, effortlessly commanding and yet reassuring through his presence – and Sampere’s Clark embodies those traits to a “T.” There have been many incredible takes on Clark, obviously, but Sampere’s may well be the first version I’ve looked at and thought… yes. I can imagine this character as the guy from the 40s, the guy from the 70s, the 90s, today.

And that’s one big thing I’m enjoying about this run in general. It’s classic, but deeper. It leans into the drama and the idealism and heroism of superheroes… and then makes them and their world feel so solid, so real, it’s like you’re peeking into another universe. And I mean this on a writing level – the rich lore, the culture clashes, flow of banter and conversation, the depths of personality and relationships. But I also mean it very much on an artistic level – Sampere’s superhero realism, and the outstanding job Adriano Lucas is doing with the colors. The latter cannot and should not ever be underestimated – I feel the ocean on my back in the Atlantis scenes. I feel the rain on my face in Gotham.

Little moments like that sequence in Gotham make the world feel real and emphasize that these books happen in the same world, the same universe. They interconnect even when they aren’t technically crossing over, so you can have these moments where the story just drops into the middle of a Batman issue (not literally) and pulls back the camera to show—anyway, read it, it’s perfect. Just like the rest of this book.

Moving to the Midnighter backup story, where the robotic gremlin in Midnighter’s head greets us with more of his insidious and manipulative banter; chipping away at Midnighter’s confidence in himself, and more, at his connection to Apollo. The evil AI in question is all that remains of once human tech genius Andrej Trojan, and he has been doing this for some time, but this time he manages to cross a line that leads to a rather lovely statement on the primacy of Midnighter and Apollo’s relationship that is one of my favorite moments in the Midnighter story to date.

Oeming’s layouts are incredibly imaginative and well-executed – he knows exactly how to move an eye across even the most unconventional of layouts, and his blacks heavy, graphic style is beautifully complemented by Taki Soma’s bold color palette.

In fact, I’ll just say that this is my favorite chapter of this tale yet. Trojan’s twisted vision continues to reveal itself; the current results of his experimentations with merging test subjects and technology are just pure nightmare fuel. This story will be wrapping soonish – I believe the annual that completes it will be released in August – and it’s evident with the turning of the story’s internal gears as well as the introduction of another player by the end…

But of course, I’m not going to spoil that.

Start to finish, Action Comics #1032 delivers epic adventure, beautiful artwork and depth that makes the world and characters come alive. It's incredibly exciting to watch this develop, and I haven't even mentioned the sleeping god. What? Read the book!

Meanwhile, Midnighter begins to draw close to the end of his adventure... just in time for a new player to arrive on the proverbial field. I'm looking forward to seeing how this all comes together next month and in the Midnighter annual!