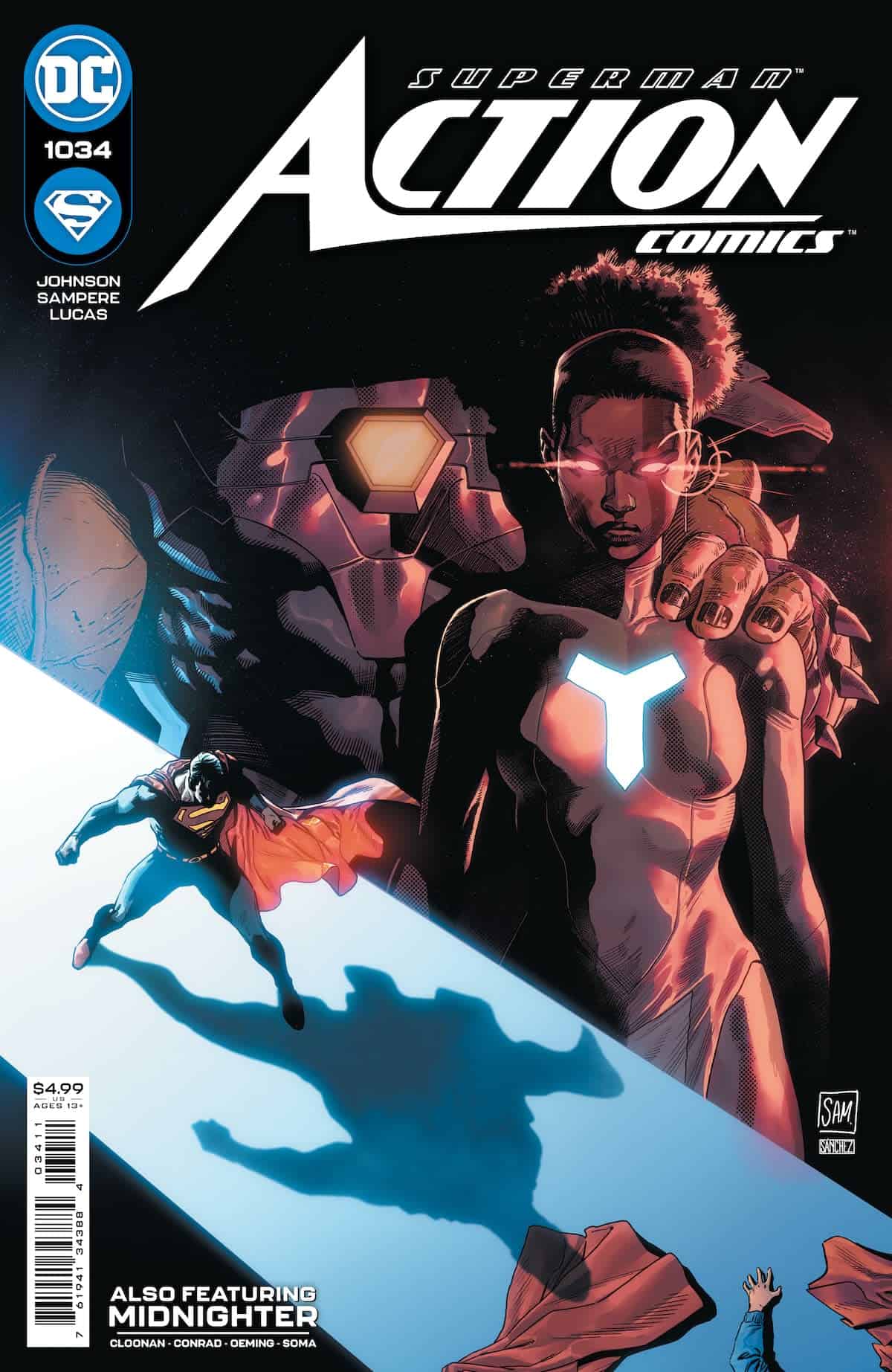 Tensions sparked by the US Government’s attempt to confiscate the chaos fragment at the heart of a recently fallen Warworld ship continue to escalate... to the breaking point. Now, with the chance at a peaceful solution seemingly dissipating, Superman makes a move that could shatter one of his most important alliances. Meanwhile, Lois and Thao-La take a stand against agents sent by Mongul... with less-than-ideal results.

Meanwhile, Midnighter and his ally Mr. Miracle make their final moves against Andrej Trojan... assuming they can put an end to this time loop, that is.

While Thao-La’s strength has increased (presumably due to exposure to the yellow sun), and Lois Lane is no slouch with a plasma cannon (or… energy canon?), altogether things are looking dire as we enter Chapter 5 of “Warworld Rising…” and the pressure exerted by events isn’t about to relent. For one thing, Thao-La’s powers are still growing… and she isn’t yet mastered their use or control, which can make her just as much a danger as she is a help.

Beyond even that, there is the question of where Thao-La’s loyalties lie. What has become increasingly clear over the course of the last few chapters is that Thao-La and her friends are not truly escapees. Rather, they are reluctant agents of Mongul, sent to infiltrate and (presumably) destroy Superman… with the genocide of their entire race held over their head as the price of failure. Despite this threat, the kindness Superman and Lois have shown to Thao-La has stayed her hand thus far. But that’s a problem for Mongul, and his problems are quick to become her problems, and thus the Kents’ problems.

The way this story has handled Mongul is truly impressive. While he (or they, really) have always been a formidable physical threat, in recent years his power as an enemy seems to have degraded somewhat – culminating in a sequence a few years back where Superman just kind of beat Mongul up to release his anger over Jon Kent’s having suddenly aged 7 years. That Mongul is dead – he was killed by the present holder of the name in the Superman: Villains special in early 2020 – and his fall has provided the perfect opportunity to really build Mongul back up into an almost mythic threat, as suits the ruler of an entire planet.

Now, with the depths of his twisted cruelty coming to light, it’s fair to say… mission accomplished.

Of course, Mongul isn’t the only one causing problems. Last issue, we left the Supers hovering between the forces of Atlantis and the United States Government, attempting to negotiate a peaceful resolution to their mounting hostilities. Unfortunately, that’s difficult now that threats have been made and weapons have been drawn. That puts Superman in an uncomfortable position because he can’t just hang there and let these two armies kill each other but at the same time, there’s not much he can do that wouldn’t trigger even more problems.

Which, of course, is what ends up happening and where Superman takes it from there is both an awesome display and potentially a very bad move. However well-intentioned his actions, and perhaps they are the lesser of various “evils,” so to speak, there will be repercussions… and they will reverberate well into the future.

There should be one more issue of “Warworld Rising” before the next stage kicks into gear, and I can’t begin to express how exciting that is. I keep hitting the hammer on the worldbuilding, but it can’t be helped. Johnson spins entire cultures out of thin air, and it’s remarkable to watch, but just imagine how deep this could get as we draw closer to Warworld itself in the coming months.

This issue has a guest artist, Christian Duce. The atmosphere established by Sampere over recent issues remains intact – it’s not a jarring change in style at all. Dulce’s figures are more muscular – more physical – than Sampere’s but no less graceful or expressive. And of course, part of what makes the change so seamless is the consistency of color artist Adriano Lucas, who is quickly taking his place among my favorite colorists in comics.

The only thing throwing me off here is… the way an item Superman is holding vanishes between the Supers starting their dash to a certain location and their arrival there. Does Superman have pockets in his cape? Let’s say he does.

Now, sliding into the second feature, we rejoin Midnighter and Mister Miracle as they make their way through Andrej Trojan’s base… much to the chagrin of both present-day Andrej and future Andrej, hereafter referred to as “Brain Trojan.”

Despite only one of them knowing the other is present, the Trojans are effectively as much a team as Midnighter and Mr. Miracle, with Brain Trojan lending his commentary along the way and urging Midnighter to stray from his path like the wolf on the side of a forest road one must walk down to reach Grandma’s house.

Midnighter and Mr. Miracle, on the other hand, are slightly less in sync as far as methods and goals go – but they remain an effective alliance nonetheless, with Shilo acting as the conscience of the duo, while also remaining somewhat naïve to the situation. Midnighter’s goal is not only to put Trojan’s whole plan out of order but also to finally break out of the time loop he’s been trapped in for who knows how many repetitions… preferably without getting anyone else killed along the way. Aside from Trojan, of course.

This is the last of these backups, which means we’re reaching the final act of the play. Since the Midnighter Special that concludes the story will be out in just! One! Week! I’m going to keep it relatively short this time around and save most of my thoughts for the endgame. For now, let’s just say Conrad, Cloonan, and Oeming have come together to create another exciting chapter in a rather complex and fascinating story. And based on that last page, which I am not going to spoil… things should get even more interesting from here.

"Warworld Rising" Part 5 pushes Superman and his allies to the limit as the echoes of Warworld’s actions hit both at home in the Fortress of Solitude and on the sea.  Meanwhile, Midnighter brings the duo of Midnighter and Mr. Miracle into direct conflict with Trojan’s forces as we gear up for the final confrontation between man, machine, and man-machine. With both stories in their penultimate chapters, Action Comics #1034 could easily have been an awkward, transitional issue; instead it is a delight from front to back, with the promise of even more to come.