Action Comics #1035: One Last Night Before the War! 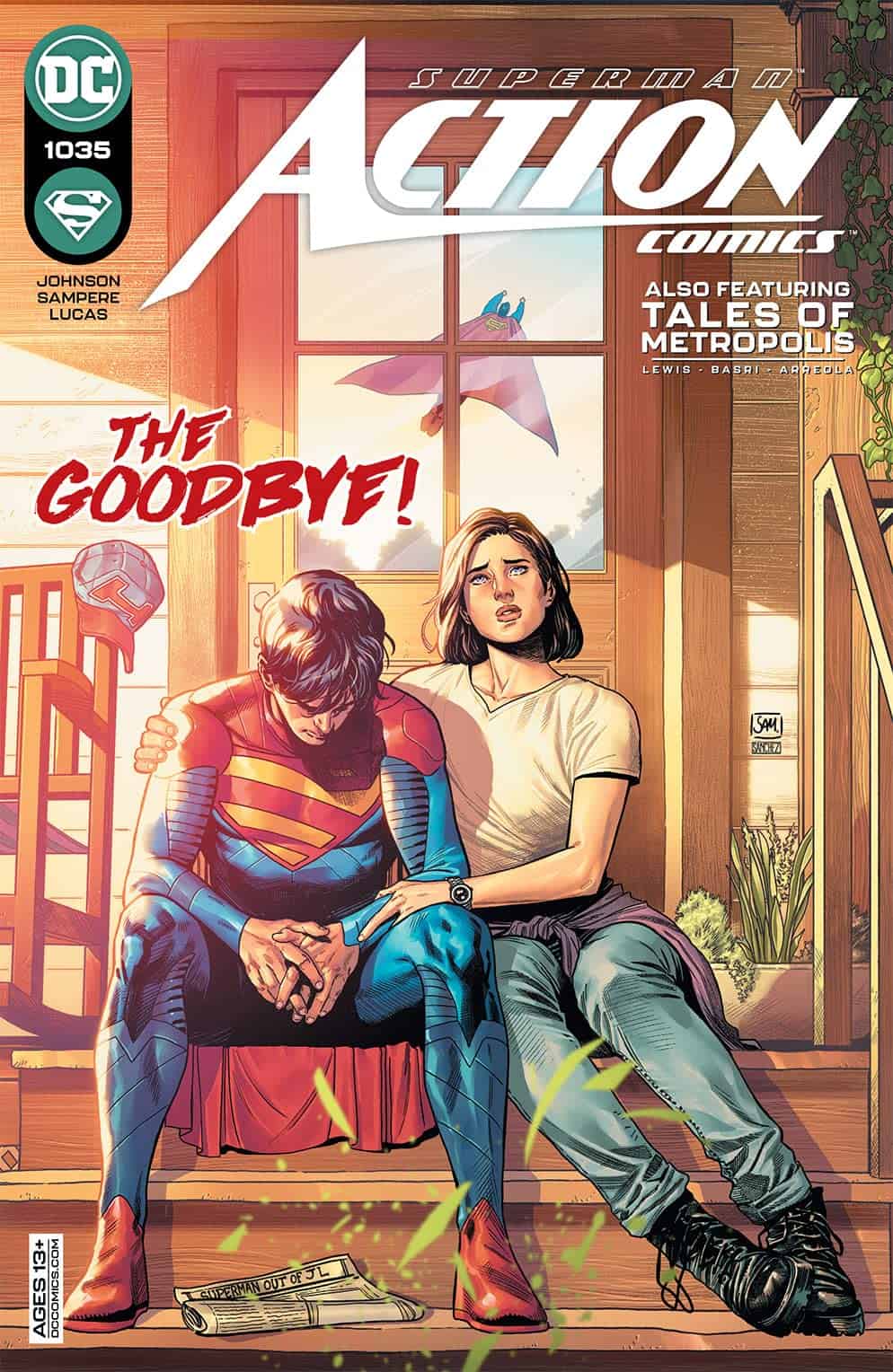 Thao-La’s secret mission on Earth has been revealed: she has been sent to Earth to kill those closest to Superman. Though she desperately wishes to be freed from this obligation, Mongul holds the lives of her people over her head... so what else can she do? Meanwhile, the Justice League comes to a conclusion regarding how to handle the recent upheavals over the Genesis Fragment, forcing Superman to reevaluate his plans for taking on Warworld.

Also, in “Tales of Metropolis: The Guardian,” a series of bizarre crime scenes come to the attention of Jimmy Olsen and the titular Guardian. They decide to look into it... but are they prepared to face what they find?

Since the beginning of Phillip Kennedy Johnson’s run on Action Comics (and, briefly, on Superman) there has been an ever-present sense of tragedy overshadowing even the happiest moments. It began with the breach, and Jon Kent’s revelation that Clark will soon die or disappear, and continued into the “Warworld Rising” plot, as tensions rose between Atlantis and the surface… and Clark became aware of the slaves kept at Warworld, and what it all means for the people there.

Now, these tensions have come to a head, as does the feeling of impending and potential tragedy. Thao-La stands prepared to kill all those Superman loves, on threat of death for her people, the Phaelosians, if she refuses. This unavoidably brings her into conflict with not just Superman himself but Superboy (Superman II? I’m not sure which he’s going by as of this issue) and Supergirl… leading to a powerful resolution gave me physical chills… and what amounts to a declaration of war thrown at Mongul’s feet care of the House of El.

This issue also resolves the conflict within the Justice League caused by their disagreements over the Genesis Fragment. I won’t spoil the outcomes there, but I will say that if you’ve been following much of DC’s lineup, there have been ample hints as to how it all shakes out. Finally, we have a scene that has been sneak peaked from time to time, providing affirmation and hope, while also acknowledging the seriousness of the situation into which Superman is now headed.

There is a power and elegance to Johnson and Sampere’s take on these characters that resonate down to their core, and to my core as a reader and fan. Both visually and narratively, this Superman radiates power and goodness, while also feeling just a touch more than human while remaining somehow absolute in his humanity. It’s a balance that can be very difficult to strike, I think, but it reminds me of the best moments of Christopher Reeve’s Superman – an almost godlike figure who never thinks of himself that way. It brings the best parts of the many takes on Superman together to form what is perhaps my favorite version of him and his cast yet.

Now, with our hero having taken his backup team (The Authority) and headed to Warworld, it’s time to confront the question of whether the main timeline’s Superman will end up chained in WarWorld for a decade as his Future State counterpart did. The smart money is on “no,” of course. But with Superman’s powers waning, it should be interesting to see how he manages to circumvent that potential future.

I honestly can’t say enough good things about Action Comics – I know Daniel Sampere is going to be leaving the title next month, and that is genuinely heartbreaking. His work has been a revelation for me as a Superman fan, and perfectly suited to Johnson’s larger-than-life and yet highly approachable, classic take on the character. Hopefully, color artist Adriano Lucas will remain, as his work truly elevates any artist and provides an atmospheric backbone to the series even when the artists switch from time to time.

Now that the Midnighter story has been resolved, we have a new backup – in this case, “Tales of Metropolis: The Guardian” by Sean Lewis and Sami Basri.

Immediately, I’m a little confused – isn’t Guardian over in Checkmate working for Leviathan? I’m going to try to put that aside because… omniverse I guess, but it does kind of throw me off. Regardless, here Guardian joins forces with Jimmy Olsen to investigate a bizarre crime scene connected to a Bloody Mary-like urban myth about a creature called Dismember… who may be more digital serial killer than mythical beast.

As is the case with most backups, the short page count just gets my appetite going. As befits the general title, “Tales from Metropolis” can vary, but this fits very well with the more serious tone presented by the lead story. I’m not familiar with Sami Basri’s artwork – looking at his past work reveals that he does have a respectable history with DC but mostly on books I wasn’t following while he was on them – but I’m enjoying it now, though I will say Dismember makes me think of Lex Luthor’s green powersuit and I’m not sure how I feel about that! Regardless, my interest has been piqued and I look forward to learning more about Dismember and what his (her? Its?) motivations and abilities truly are.

Altogether, a fantastic issue with a powerful and affecting lead and the intriguing opening to a new backup storyline. This is just what I’ve come to expect from Action Comics, which has been fantastic every month since this run began. If you aren’t following Superman books right now, my friends, you should probably correct that as soon as possible. I’m just saying.

Action Comics #1035: One Last Night Before the War!