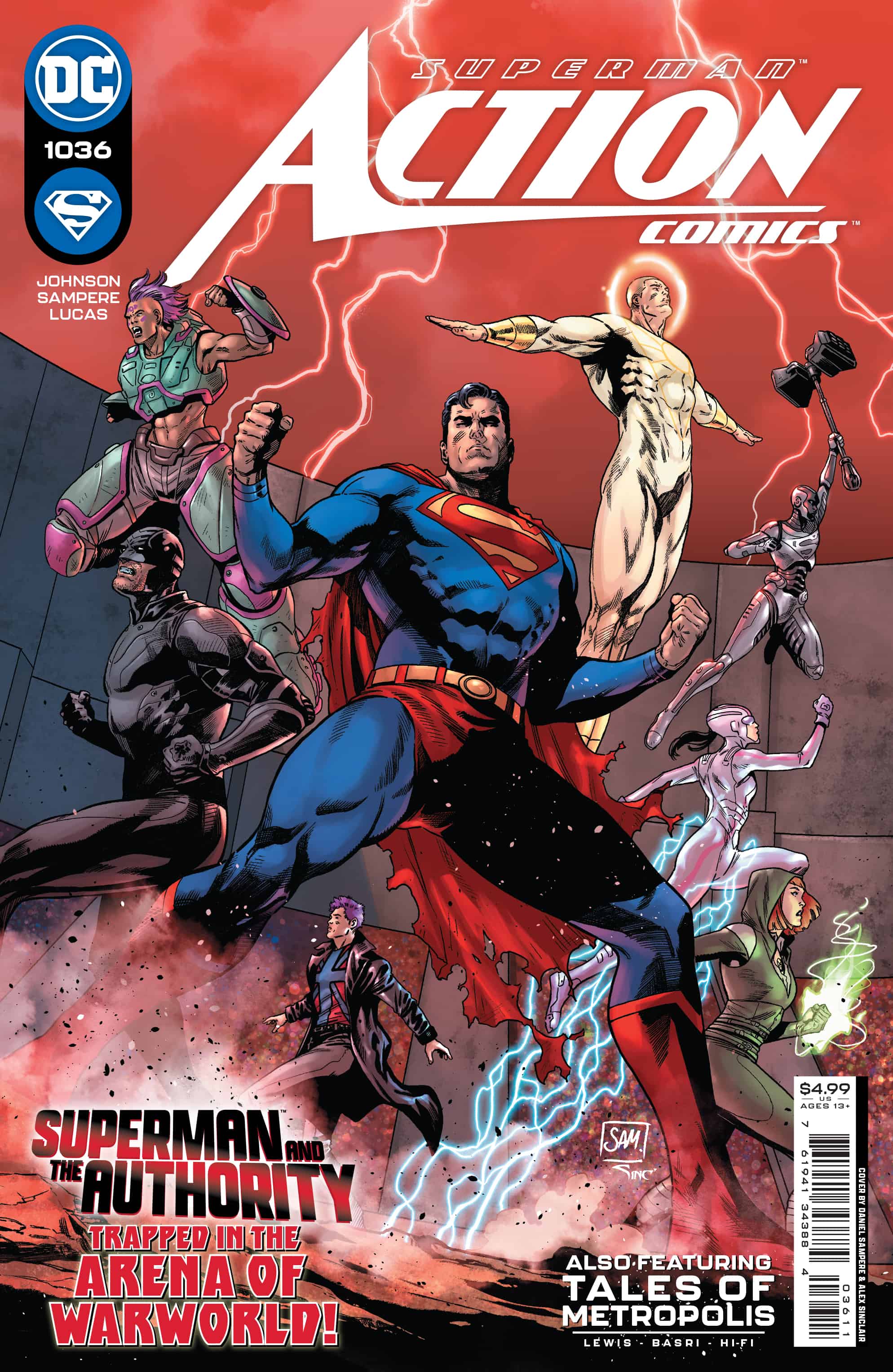 The time has come at last! Superman and his newly formed team, The Authority approach Warworld with the aim of freeing every slave held there. They never expected this to be an easy task, even so, they could not have expected the horrors that greet them on arrival. The Warworld Saga begins here!

And, in the Tales of Metropolis backup feature, The Guardian brings his investigation of the Dismember case to Dismember’s own virtual doorstep intent on retrieving the cyber-monster’s victims.

There’s an almost giddy feeling when well-executed buildup finally ceases to build and begins to pay off. That being the case, it’s probably not surprising if I say I have been eagerly anticipating Action Comics #1036, or that reading it made me want to bounce in my chair a little.

So, to catch us up quickly, Action Comics #1035 brought Superman’s new team, The Authority, onto the case of Warworld as the Justice League has opted to bow out for various reasons. In between 1035 and now, the team also took a side trip into the excellent Batman/Superman Authority special which hit the stands last week and brought the titular heroes into conflict with an ancient empire threatening to emerge from the Dark Multiverse. …another thing I’m not going to spoil but, seriously, go read it.

With that mission behind them, Superman now leads the Authority into space in pursuit of Mongul’s Warworld. Unfortunately, Mongul is aware that he is making this trip… which means he’s prepared a heartbreaking and gruesome welcome for our heroes – one involving messages left on corpses. Many corpses.

Along the way we are given some… clues as to some of the forces in play here, including a fascinating opening scene involving the Lord Premier of Durla, and his… interesting (read: violent) reaction to the use of the word “Phaelosians.”

We also get to know the individual team members… but the most interesting part to me may well be the opportunity to see Superman through their eyes. The members of this team are not bad people – well, you could make an argument that Manchester Black has at times been a bit of a—you know, but they aren’t evil or malicious. Even so, to see their reaction to Superman’s natural empathy and compassion is to be reminded that he is truly the best of mankind.

Johnson has just been a gift to the Superman mythos, taking familiar things such as Warworld and building them up, deepening their mythology, filling in their gaps until they begin to feel more like a real place than a fantasy. That is one of his greatest gifts as a storyteller. He continues to flex that particular muscle here as we begin to learn more about the Warzoon culture – the culture of Warworld – and the brutal meaning of the chains that bind Warworld’s denizens.

Furthermore, we begin to see the gaps filled between the Morrison- and Janin-led Superman and the Authority title and now, as we discover the ramifications of events during the breach story from earlier this year.

I have been a great fan of Phillip Kennedy Johnson’s run-on Action Comics so far. A description of the run would sound very much like a description of Superman himself: epic yet grounded in humanity. In other words, a fantastic balance of “super” and “man.”

This is where we begin to focus more on the “super” side… which is somewhat ironic considering the events of the last few pages… but I’m not going to spoil that. Instead, I’ll just correct myself a bit and say we’re focused on the epic side – what else could a journey to another planet to overthrow a brutal, slave-owning regime be but epic?

The story also serves to, for lack of a better term, redeem Mongul’s effectiveness as a villain. Despite his great power, Mongul has sometimes been used in ways that underplay his danger as a foe. This is hardly uncommon – it happens constantly to Wonder Woman’s rogues gallery for example, but even characters like Darkseid can sometimes lose their grandeur. Yet, a hero is only as great as their foes, so this can only end up devaluing the heroes themselves.

In Mongul’s case, however, his construction as a villain makes this fairly easy to remedy. Because of course, Mongul is not one person – it is more a title than a name. Each Mongul rises to power on the broken body of his predecessor, and each has his own personality, his own motivations – at least in theory. So while they have often been written as interchangeable, there’s no reason they must be.

Johnson has taken full advantage of this “out” to create the most dangerous version of Mongul yet, and I am loving it.

The bad news is that Daniel Sampere is not long for this title. His take on Superman and his mythos has been among my favorites to date. His Superman is larger than life, a gentle giant with a presence both reassuring and imposing and an appearance that calls back to takes like the 40s animated series, or Frank Quitely’s version in All Star Superman. Though he doesn’t look like Christopher Reeve, he certainly feels like Reeve’s Superman, and that can only ever be good.

Just overall a fantastic opening to this long-awaited story. I intend to come to each issue with a bag of popcorn and some tissues just in case of tears.

Moving on to the backup for this issue, we have Part Two of Tales of Metropolis, focusing on The Guardian. When last we met, the weird virtual reality creature Dismember had been appearing during Ouija board rituals and dragging the summoners into some unknown space. Now, the Guardian enters into Dismember’s world, where he must uncover Dismember’s identity and free the abductees.

I’m of two minds with this story – on one hand, it’s really fun. It introduces a new villain in the weird cyberbuglike Dismember – whose abilities are pretty disturbing to think about. It also spotlights Guardian, who is all too often forgotten. On the other hand, even after reading through it, I’m not quite sure how any of the things that happen work or why Dismember is doing what they’re doing. In the end, the resolution is a bit strange, and I still have numerous unanswered questions. I’d love to see Dismember return at some point to allow these questions – and his story – some room to breathe.

All that said, I did enjoy the story and hope to see more of Dismember in the future. Furthermore, the thematic resonance between lead and backup – both stories follow a hero forced to venture into the enemy’s territory to free innocents – generates a synergy that I greatly appreciate.

Action Comics #1036 just makes me giddy... which, given the subject matter, may say something about me. Johnson is building new mythology, filling in long-underused corners of the mythology, and doing it with enviable grace. His work in concert with the fantastic artwork from both Sampere and brilliant color artist Adriano Lucas has made this run my favorite Superman run in recent memory.

"Tales of Metropolis" is a fun side trip into the life of an often-overlooked hero. Unfortunately, due to its being a backup and limited to two parts, it doesn’t fully explore the issues – or questions – it raises. That does, however, leave open the potential for the ideas herein to return on a larger stage, which would certainly be welcome.