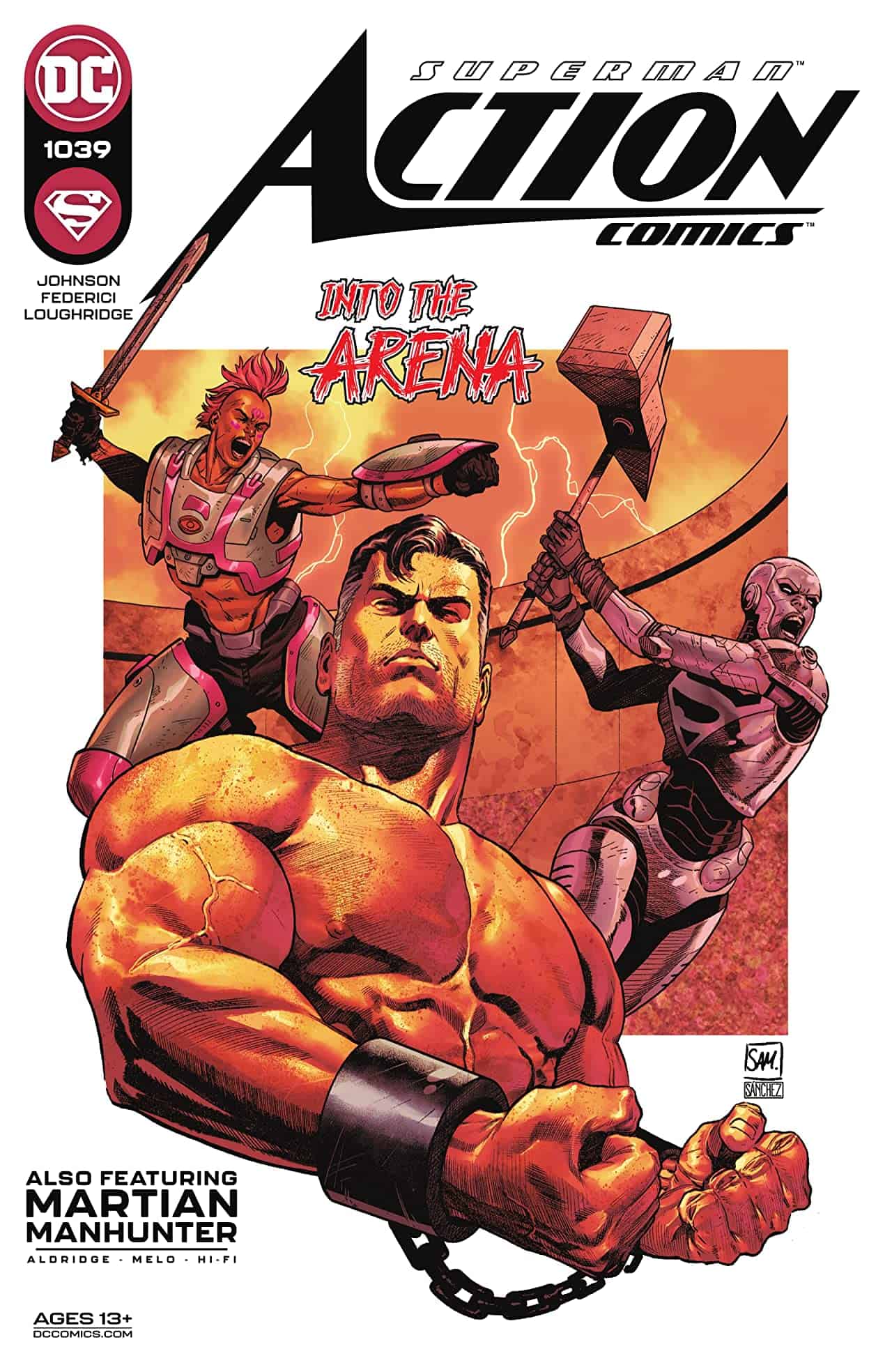 The Authority has fallen. Separated and enslaved by Mongul, they are left to try to survive in whatever way they can... and some are adjusting better than others. As Clark gathers information, Natasha Irons moves through the gladiatorial ranks... and in the shadows, someone else lurks, seeking a way to free the one person who may be strong enough to turn the tides against Mongul.

Meanwhile, Martian Manhunter forges a bond with a streetwise little girl who may hold the key to stopping whoever is making children disappear.

Action Comics #1039 opens with the first entry of Clark Kent’s journal. It begins with an explanation of his identity and his “story,” both past and present. As a journalist, he says, he feels compelled to record his experiences on Warworld.

On the following pages, that experience – his life in the gladiator pits and in the colosseum of Warworld itself – plays out in brutal detail. It begins in the ring as part of a group effort against a giant alien of some kind, continuing through the torturous methods used to subdue him after the fight, and on to his “life” inside a hanging cell at night. Through it all, he is the only one present who fights without a weapon. Even now, he refuses to kill… and when confronted with the apparent foolishness of his principled stand by Phaelosian fellow prisoner Kryl-Ux, he says simply that he didn’t come to Warworld to maim people.

Even now, in some of the most difficult circumstances of his life, Clark’s principles refuse to give way. That is, after all, what makes him Superman.

…that is also, presumably, the reason he’s there to begin with. By putting Clark in a colosseum, Mongul forces him to choose daily between life and death, both for himself and for his opponents, knowing that at times those options are wholly incompatible with one another. If he continues forward in this way, he’ll eventually die – but more than that, he’ll die in a way that other prisoners see as unnecessarily idiotic, which lessens his potential as a martyr. If he finally violates his ideals and takes a life, he has effectively broken his potential as a martyr or a leader as well.

In short, Mongul’s physical battle against Superman is, for the moment at least (forever in his mind), won. The battle that rages now is with Superman the symbol.

…not that his weight as a potential savior figure is doing him much good right now, but of course, that isn’t Clark’s concern anyway. He is too busy working through his observations, gathering information, learning about Warworld history and physical makeup. Analyzing.

It’s great. Typically, writers will tend to focus on Superman’s physical prowess – a natural route to take considering he’s, well, Superman. But here, stripped of his superhuman abilities, both he and we have no choice but to focus on his other, often underestimated, weapon: his mind. Clark’s intellect is often lost in the rush to portray his small-town charm and straightforward moral code, but not so here. Clark is as active intellectually as he is physically, putting pieces together until he can find a plan of action… or at least the beginnings of how to start one.

It is, therefore, through him that we the reader come to understand the true nature of Warworld. This new origin builds on the previously established (and sometimes contradictory) origins presented for it in the past all while revealing the true scope of the horror inflicted on the universe by the Monguls’ long reign as what amounts to universal scale warlords.

As for how the other Authority members are faring, well, that depends on the member. OMAC continues to struggle with their rage over the recent death of Lia “Lightray” Nelson, while Natasha Irons is accumulating arena victories quickly, allowing her to leverage her newfound respect into a role as a smith. As for why she would want to do that… well, let the story tell its tale.

While the fate of other members remains in question, by the end we will learn the location of two more members… and the beginnings of what might be a way to turn the tide.

Phillip Kennedy Johnson has been on Action Comics for just shy of a year, and I can’t quite decide whether I can’t believe it’s been that long or can’t believe it hasn’t been longer. In that time, he has taken the Superman world and made it his own, but without dismissing or misusing any of the classic elements that make Superman so enduring as a character. He is inspirational, and aspirational, all while remaining human. It’s like the best parts of every take on Superman combined into a best-of-Superman-traits mix that somehow manages to still produce a coherent, internally consistent character.

His take on the world itself is no different. It’s been a few months since I raved about the worldbuilding here, but I think it’s obvious at this point that building fictional worlds up until they may as well be real is one of his true gifts.

The addition of absolutely brilliant artist Riccardo Federici just adds to the effect. In his hands, Warworld comes alive as an alien landscape populated by flora and fauna just this side of recognizable – grounded and fantastical at once. It’s hardly surprising that the two of them work so well together – that’s been the case since The Last God back in 2019, and shorter projects like the recent Ra’s al Ghul story, “The Demons Game” in the Gotham Anniversary Special just made the compatibility of their approaches more evident. I have had a true and deep appreciation for the artists who have graced Action Comics during this run, but for this story – the Warworld Saga in particular, I can’t think of a better choice than Federici. And while I have long been a huge fan of previous (regular? I’m not sure whether he’s coming back!) color artist Adriano Lucas, Lee Loughridge’s use of near monochromatic color schemes complements Federici’s fine detailed work beautifully and lends Warworld an otherworldly feel to which it is well-suited.

Long story short, if you aren’t reading Action Comics already, you are missing out and should immediately start doing that. This applies whether you like superheroes, fantasy epics, or things like gladiator films. Or, really, any story at all.

So speaks the reviewer!

Moving on to part Three of “A Face in the Crowd,” we pick up with Martian Manhunter in a diner with Zoey, a thirteen-year-old girl who approached him at the end of the last issue… and who turns out to be a big fan of the Manhunter’s exploits. Aside from that, the good news is, she seems to have her pulse on recent events in the city – specifically a crime spree she links to people in gold masks. The bad news is, it’s a school night so any responsible superhero must make certain she goes home and gets some sleep.

That said, the information provided is invaluable, ultimately leading to a cross between the two previously disparate threads: the missing children being investigated by the Metropolis Police Department and the bizarre knock-offs of old Martian Manhunter villains.

I appreciate Shawn Aldridge’s focus on J’onn’s isolation and untethered feeling – I’ve mentioned that before, but it bears repeating. That theme, his desire to find a place to belong and to connect with his new homeworld, is not only a great way to explore J’onn J’onnz himself, it’s also a theme that resonates with the abduction plotline as each child taken was seemingly targeted for their own similar feelings of loneliness and lack of direction.

I’d like to see what this team could do with a longer page count because in my experience with these backups it can be difficult to track a more complicated plot in 8 page monthly installments – I had the same problem with the Midnighter backups from earlier this year. And, of course, like Midnighter, this is a story I would like to keep track of. That’s just a limitation on the form though and doesn’t reflect on the team. Ultimately I just end up rereading the story to date every other month or so anyway, which isn’t much of a burden considering it’s only eight pages.

As for the identity of the culprits here… I’m not going to spoil the spectacularly creepy bit of work coming from artist Adriana Melo – but I will say this: if there isn’t a connection between this antagonist and a similarly themed Batman antagonist I will quite surprised.

Someone needs to make a film out of this Action Comics run sooner rather than later.