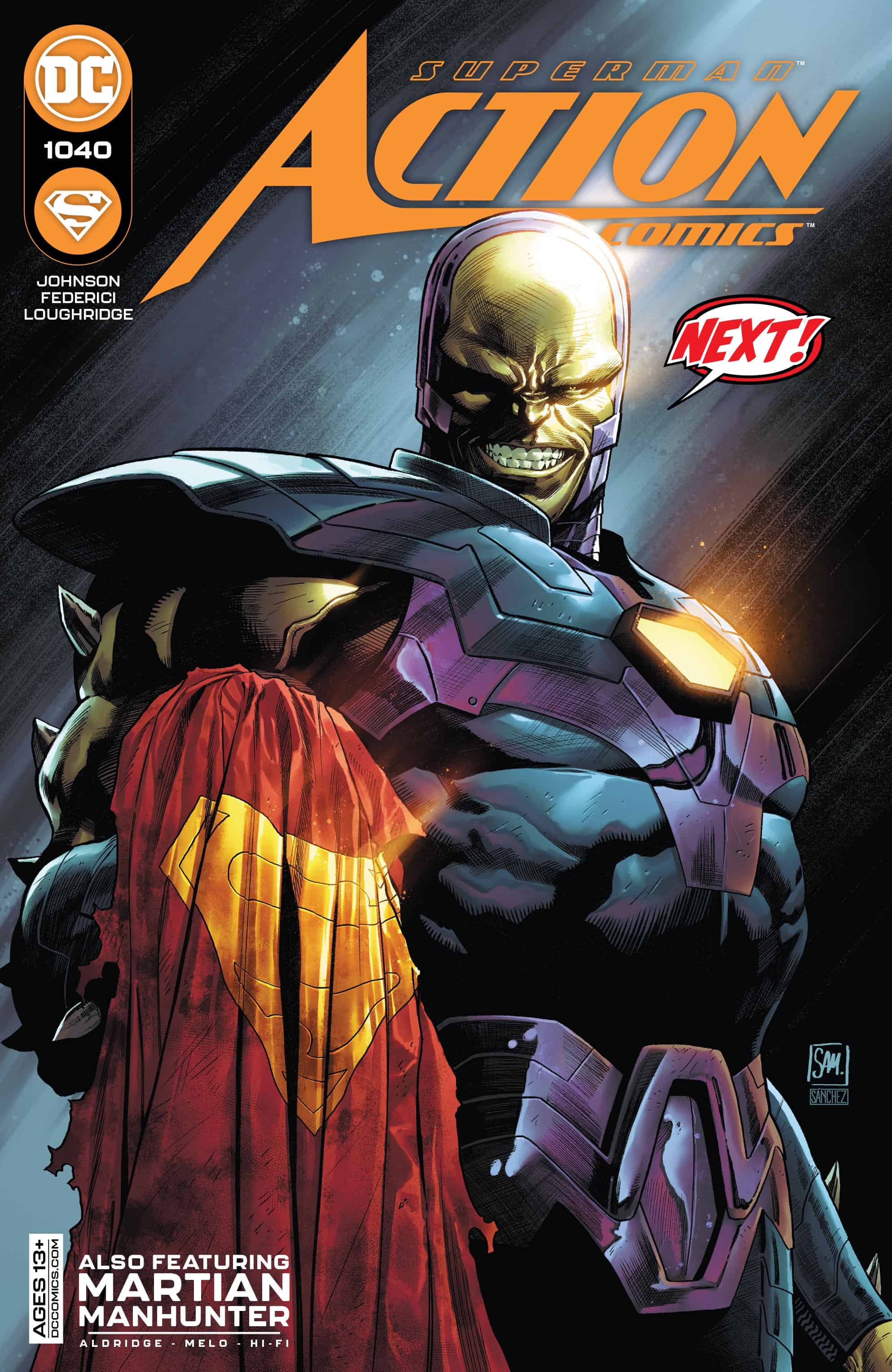 Trapped on Warworld, forced into the gladiator pits, Superman continues to build a name for himself as the one who will not kill – the Unblooded Sword. While his refusal to kill or, indeed, do any serious harm to his opponents earns him disdain with some... his compassion and hope may yet change the world. And O.M.A.C. is offered a dangerous bargain to regain what she has lost... but at a high cost.

Meanwhile, in the Martian Manhunter backup, J’onn’s quality time with his cat is interrupted by an old enemy who has arrived equipped with tools designed to counter his formidable abilities.

So, many years ago, when I was a wee baby and first getting into comics, I ran across Action Comics Annual #2. It had a beautiful George Perez cover of Superman in gladiatorial gear, sporting a beard and looking ready for war. Inside was a story by Perez and Jerry Ordway. The issue was released in 1987, and the thing is, while I’m sure the story itself was great – I can’t imagine it wouldn’t be with those names attached – the main thing that sticks with me all those years later is that cover.

My understanding is that Phillip K. Johnson had a similar experience, albeit with a different blade-toting Superman cover, which I think speaks to the power of that kind of imagery when associated with this larger-than-life, often untouchably powerful man. The very concept of Superman in this alien to him setting, being forced to fight like a human would, and face his mortality. It’s the kind of image that sticks with you for decades, even when the story the image reflects has faded.

The other thing about that image, and the idea of Superman facing genuine danger in general, is this: no matter how desperate the situation, no matter the peril to him, even if it kills him, Superman will never betray his principles. He will never choose himself over others. We’re used to that in his “everyday” superheroics, but it’s when you put him through the gauntlet that his true strength – his resolve and his goodness, really stands out and makes him sublime.

That brings us to The Warworld Saga.

Inworld, it has been approximately one month since Superman and the Authority arrived on Warworld. At the time, they intended to swoop in, savior style, and simply defeat the tyrant Mongul… but as is the case in many oppressive situations both real and imagined things are not so simple as that. He enters a culture built around teaching – forcing, really – people into accepting and valuing their own subjugation. As well-intentioned as they were, and even putting aside the fact that they were trounced, you cannot descend from on high and simply rewire the way a society works. The only real way to change a culture is to change the hearts of the people within that culture.

Enter Superman – or rather Clark Kent. Several weeks into his time as a gladiator he has yet to kill an enemy. The warriors that surround him taunt him as an unblooded sword and while this is meant to be pejorative, to Clark himself it is a mark of pride. It is also what allows him to undertake the slow process of affecting the value system that has been beaten into the residents of Warworld… and particularly the Kryptonian descended Phaelosians. Because if someone values your life when no one else ever has, how can you not respond to that in some form?

Mongul recognizes this to some degree – it is the reason he doesn’t kill his enemy and turn him into a martyr. But there are downsides (to him, anyway) to letting Superman live, too, because as long as he is there, he is chipping away at the foundations of the Warzoon culture one person at a time.

It’s difficult for me to express how beautiful and inspirational I find this entire storyline. I haven’t read many discussions around the series to date, but I have heard that many people are interpreting the story as having a message about politics or religion – and I can understand that. But I’m not here to talk about any of that.

Because at base, this is a story that speaks to the resilience of the spirit and the drive that pushes people to reach beyond the circumstances into which they are born… and how powerful it is when someone takes the time to see and acknowledge a person when no one has. How powerful it is to be or know a person who sees you as a whole entity – as Kant would say, not as a means to an end but as an end to yourself.

But more than anything else, it’s a story about how Superman is just the best person in the universe and the contagiousness of compassion.

It is also an extraordinary bit of worldbuilding both in writing and visually. Riccardo Federici is, I think, one of very few artists who has not just the talent and vision but the precisely correct kind of vision to partner with Johnson here. He brings that fantastical sci-fi feeling to the story that one would want from a kind of semi-science fiction, semi-fantasy epic like this one, and the designs of the characters, monsters, and scenery alike are phenomenal.

I just can’t say enough about this run, which I’m convinced is a classic in the making. At least if the comic readership has any taste, it is.

Moving along, we come to A Face in the Crowd Part Four, the latest installment in the Martian Manhunter backup story by Shawn Aldridge and Adriana Melo. Last issue closed with the revelation of the bird-themed villainous organization Vulture, which has taken on a sort of Court of Owls-esque masked theme in its latest incarnation.

Now, I’ll be honest, as much as I enjoy Martian Manhunter, I’m most familiar with him in the context of his Justice League membership. That being the case, I sat down and did a bit of research on the returning villains from J’onn’s past, most of all Vulture itself but also including this Trapjaw style fellow. I probably should have done that earlier but ignore that.

For those ignoramuses such as myself, J’onn was once the Bronze Wraith, a member of the superteam Justice Experience, which was ultimately massacred by Doctor Trap, the fellow with the jaw, who blamed them for the death of his love, after she became a casualty of a battle between metahumans. J’onn was the only survivor of the team. That being the case, it’s both fitting and fascinating to see him back here now.

VULTURE is another old enemy of J’onn’s – a criminal organization last seen in the 1960s, in an arc that saw J’onn impersonating a deceased leader, Marco Xavier, to bring them down. Now it seems they have returned in a modernized form and have been revealed to be the primary masterminds behind this parade of old Martian Manhunter villains, and the disappearance of lonely, untethered children.

Honestly, I do wonder how much your average Action Comics reader is going to understand and appreciate the references or the significance of all these old-school villains making a comeback. I’m a fairly hardcore geek but they had flown under my radar. But what I find interesting is the way it serves as a doubling down of DC’s “everything happened” stance. Bringing back these old stories, whether as references (as with the No Man’s Land reference in Detective Comics recently) or through the modern reintroduction of the characters involved makes the point that the long, rich history of DC Comics truly has been restored. That’s immensely gratifying as a longtime fan, and I can’t imagine how exciting it is for longtime Martian Manhunter fans, especially after the shuffling around the character has suffered since the New52.

Now that’s all metatalk. When it comes to this specific story those old references serve the important purpose of bringing J’onn’s past, and his past efforts to blend in or stand out depending on the story, to focus. These are the support beams for and reflection of his current desire to reconnect with the world, and with his self and history, and it raises the question of whether one can truly move away from their past, and whether the specters of the past be laid to rest for good… or if they even should.

This review is honestly too long but I guess what I’m saying is, excellent stuff.

This is what Superman should be – a beacon of hope, principled and good to the core, and all of this without falling into the trap of coming off as preachy or naïve. In other words, Superman at his most inspirational. What more could you want than that?