Action Comics #1043: The Story Behind the Story 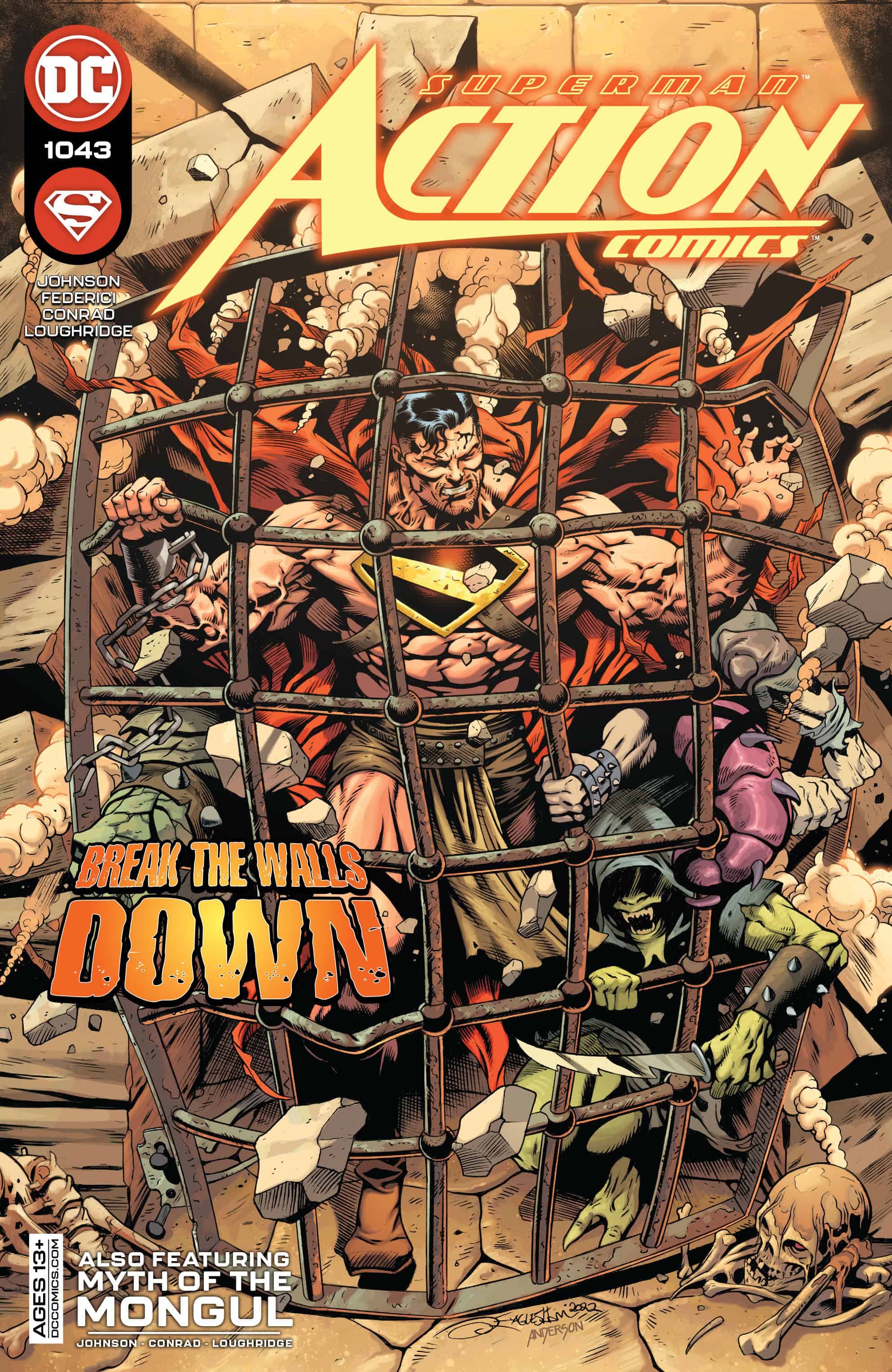 The revolution of Warworld begins! Superman leads an alliance of rebels from Earth and Warworld alike against Mongul’s forces. First priority: wresting their lost Authority members from Mongul’s grasp... but with some of their heaviest hitters among the captured, this could prove more difficult than it seems. And it already seemed pretty bad.

And for our backup, join the sage/storyteller Byla as he spins the tale of the First Mongul – who he was, and how he came to be the ruler of the Warzoon.

When I was a kid, I had it worked out that each of DC’s Trinity had a home genre: Batman was crime fiction, and Wonder Woman was fantasy. Superman? Science Fiction. I figured if you combined their home genre with the mutually shared genre known as “American superhero comics,” voila, you would have a pretty good approximation of their foundation. For the most part, I still stand by that.

But, well, obviously, this doesn’t mean they could only exist inside those specific genres. Sometimes taking a character out of that home genre makes for incredibly memorable stories.

Case in point: the Warworld Saga. I never would have thought that what amounts to a fantasy epic would work so well with Superman. Of course, doing the inobvious and making it seem obvious or inevitable is one of the things excellent writers can do with their mystical word processor mojo… and Phillip K. Johnson’s word processor has been extra mystical in recent times.

As a quick summary, Superman has resolved to travel to Warworld and bring Mongul’s slaving, torturing, gladiator deathmatch loving ways to an end. After a minor falling out with the Justice League over the Genesis Fragment, a mysterious artifact from Warworld, Superman gathered a new team, The Authority, to accompany him on his mission. Upfront, that mission was unsuccessful, to say the least, and most of the team was captured, including Superman himself. Unfortunate though it was, the capture did allow Superman to gain support from Warworld residents with the hope of sparking resistance. Oh yeah, and on top of all that, Superman is currently dying, and his waning powers have of late been wiped out by the red sun energy Mongul uses to fuel the planet’s engines.

Now the revolution is on, baby. Superman’s powers have been partially restored through contact with Genesis – though it remains unclear what that is – freeing him to serve as a leader and figurehead to this growing revolutionary movement on Warworld. The days of Superman being the Trinity member with little fighting skill should be effectively over now – not that I expect him to beat Wonder Woman in a swordfight, but he sure can use a sword and do so nonlethally, maintaining his status as an aspirational figure who fights and wins without ever stepping back from his dearly held principles. The Unblooded Sword.

The revelations continue as well, with the origin of the terrifying, monstrous Mother… and touch on the mysterious origins of Warworld itself, and how its birth reflects on and reverberates throughout the infinite multiverse – including an explicit reference to an often discussed – and often overlooked – aspect of Superman’s character.

Meanwhile, Mongul and his servant seek to weaponize the still captive Manchester Black, Apollo, and Enchantress – the question is, will they manage it before the resistance can find and free them?

This is all pretty fascinating stuff, and it’s leading to a somewhat sheepish admission: I never really thought very much about Mongul. I was, of course, aware of him – no Superman fan worth their salt has gone without reading Alan Moore and Dave Gibbons’ classic, “For the Man Who Has Everything.” I also remember him from a big New 52 event, not to mention I went back and read his first appearance in DC Comics Presents when it became clear where this story was going. But knowing he existed as a character didn’t really give him a claim on a corner of my imagination, so to speak. I admittedly often thought of him as something of a backup Darkseid and, despite his established immense strength, kind of a B-List villain.

The fact that I wasn’t thinking much about Mongul means I also hadn’t thought much about the thinness of Warworld’s lore. A giant metal planet? Sure, why not? I was never sure what went on there (aside from the gladiator pits) or how you even live on a metal planet, but it’s comics so I just let it go.

Those days are effectively at an end. The decimated corpses scattered over the warfield at the midpoint of the issue are haunting, and effectively convey the dread of Warworld’s approach – a threat even the United Planets shy away from confronting. The characters, the world, the cultures… they all breathe and live in my mind as though they truly exist and regardless of how much time is spent portraying the lore, history, and culture of Warworld, it always feels like there’s more to learn and see; as though there are volumes of history and language notes that have not, and may never, make it to the page. Which, if you’ve read Johnson and Federici’s previous collaboration, “The Last God,” probably sounds believable.

As evidence of this, I hold up this truth: I was so wrapped up in the story that I literally didn’t notice when Federici’s pages ended and Will Conrad stepped in. I truly hope that doesn’t come off as dismissive – it is not. The artwork is fantastic, the colors beautifully subtle. I have been a huge fan of Federici’s since the first time I came across his work, and while I’m not as familiar with Conrad, I look forward to seeing more from him – for example, in the backup story.

So, my point is not to be dismissive of the beautiful artwork at all. What I mean is that the words and images flowed and meshed so well that I was no longer consciously noting the technicalities. Federici and Conrad’s styles aren’t even especially similar, yet my mind skimmed over that entirely – I wasn’t just reading. I was living in that world, and in this story – exciting, emotional, inspiring, and epic as it is.

This brings us to this issue’s backup feature. Previous months have featured rotating creative teams and highlighted lesser-known characters, sometimes serving as a bridge to upcoming features or storylines. This month is a little different. In “The Myth of the Mongul,” regular series writer Johnson and the previously namedropped Will Conrad share at long last the secret origin of the original Mongul – or is that The Mongul. That makes more sense once you’ve read it.

The backup feature is short, not-so-sweet, and effective as it weaves Mongul’s origins together with Warworld’s into the story of this man who gains power through a mix of happenstance and temper… ultimately recreating himself as the tyrant who began the road toward Warworld as it exists today. In the end, the culture he shaped would see his fall and his son’s fall, and his son’s fall after that so on into perpetuity.

I can’t say enough about how this storyline has elevated Mongul. For the first time, I feel as though he is an individual, credible threat rather than a B-lister who gets pulled out when Darkseid is unavailable. If the intent is to elevate his status as a villain, this should do it. If it doesn’t, then I have no idea what could. Better yet, through everything, Clark always conveys the grace and humility of a true Superman – the one who stands as the best of us.

My only concern is that it may be a difficult act to follow – for the next person who wants to use a Mongul, I mean.

As a side note, who do I have to pay to keep Apollo’s hair white/silver instead of blond?

Action Comics #1043: The Story Behind the Story