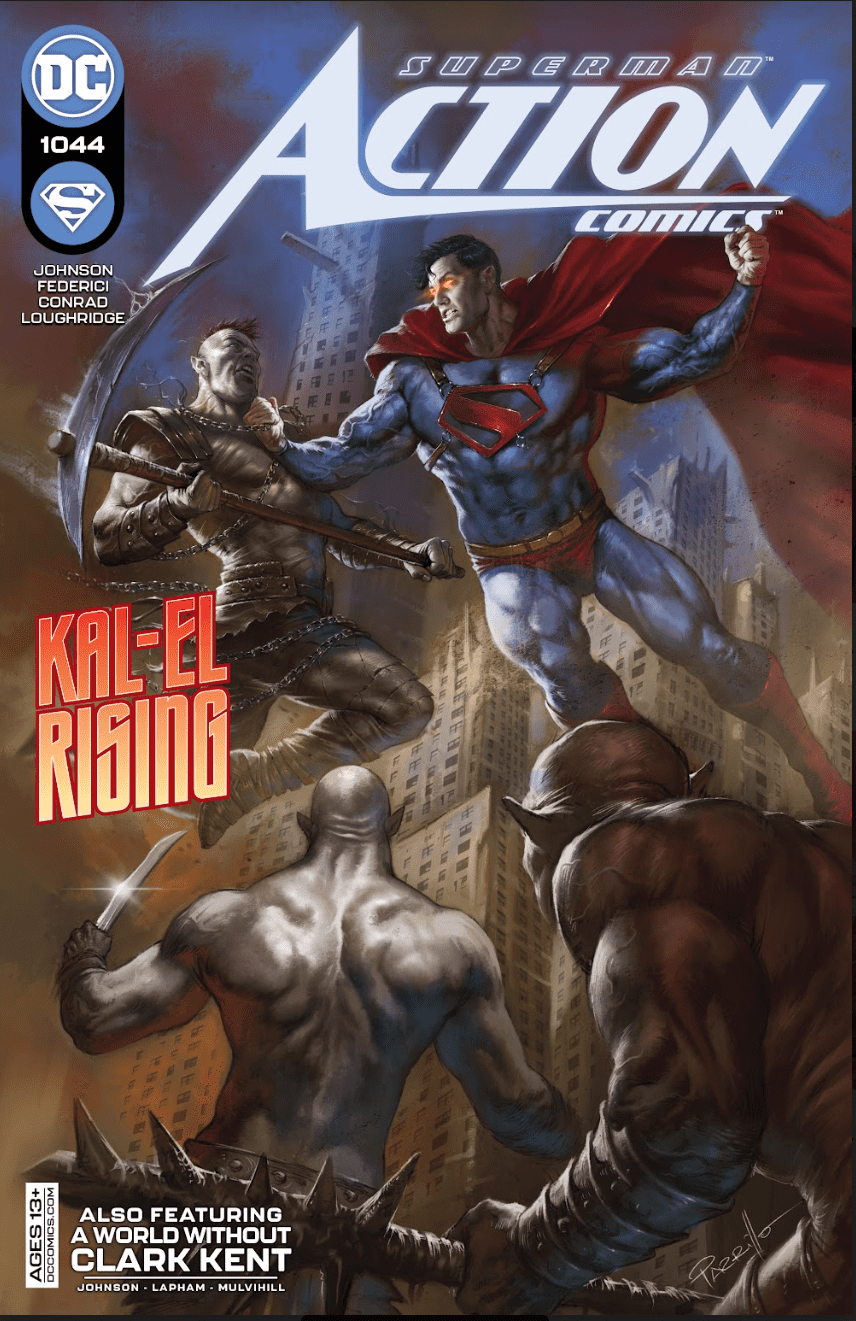 The revolution is in motion on Warworld, putting pressure on both Superman’s allies and Mongul himself. For Superman, the key to retrieving the captured Authority members may lie with the mysterious infant called Orphan. Mongul, on the other hand, is faced with the difficult question of how to fulfill his promise to OMAC: the return of the deceased Lightray.

And in our backup, Thao-La’s condition continues to deteriorate, leading the Super family to seek alternative means of treatment for her.

Since the beginning of the Warworld saga, several interesting and mysterious new characters have been added to the cast of Mongul’s court… and slowly but surely we have been learning about those characters, their histories, and their roles both in the plot and in Mongul’s forces. Previously, we had learned about Mother, a world-breaking undead sorceress. Now, in Action Comics #1044, it’s Orphan’s turn at the mic.

We rejoin Superman’s alliance of rebels. After months of living in the gladiator pits, trying to win over the hearts of the Phaelosians, and moving the people of Warworld toward rebellion, Superman has finally managed to spark a revolution. The problem now? Much of Superman’s initial allied team, The Authority, remains in captivity… including perhaps their two strongest members, Apollo and The Enchantress. After some controversy on in what order the member should be freed, they have currently landed on the Enchantress, June Moon, who is currently being held by Mother.

Taking on Mother is a bad idea under the best circumstances, but the good news is, they’ve acquired a certain “ally” in the recently captured Orphan. Officially, Orphan is an ally of Mongul’s but due to the “child’s” unique circumstances… which is to say they’re an infant in a bottle – they can be motivated to help using incentives – in this case a promised reunion with Orphan’s cybernetic body, Darling.

Mongul has other problems. While his plans as a whole continue to proceed, apparently, according to his desire there is the issue of trying to raise Lightray – a promise made to OMAC as an incentive for recruitment. The slightly-disturbing-yet-kinda-realistic issue lies in the length of time Lightray has been gone, among other things. But with OMAC refusing to take no for an answer, Mongul may need to get creative.

It’s not going to come as a surprise to anyone when I say I loved this issue. Kennedy and his collaborators (currently Riccardo Federici and Will Conrad) continue to build out and build up, spinning new mythology and forming a foundation for future works.

For me, though, one of the most interesting things in this issue is the treatment of the comic-book trope of impermanent death. It’s a funny thing –while I don’t find resurrection to be the anathema that many people do, I do think it is often treated without sufficient gravity to justify the drama surrounding a death. By now, I would think that many DC characters would be numb to the falling of comrades and just expect everyone to return. For this reason, I often appreciate stories that red flag this issue and kind of address it, directly or indirectly – the funeral of Martian Manhunter just before Final Crisis with the eulogy that included a prompting to “pray for a resurrection,” for example, or… everything about the al Ghuls and their Lazarus pits.

Here we see another take – one that grounds death in danger despite the acknowledgment that it is often a temporary condition within the DCU: much like the original Lazarus Pits, Mongul can raise the dead, but the longer the death is in effect the more difficult it is to draw a person back… and even if you do draw them back, can you be absolutely certain that what you get is what you lost?

As always, the artwork is just stunning. The switch between artists Federici and Conrad does strike me as more noticeable this time, in part because the page assignments seem somewhat less deliberate. Nonetheless, both artists carry their pages well. Federici’s Clark is a sight to behold – muscled like a Boris Vallejo painting but with the soft and open face appropriate to Superman, all portrayed in a way that conveys both his power and his kindness. His infinite compassion. On the other side of the spectrum, we have Mother, who is genuinely one of the most horrifying creatures I’ve seen in mainstream comics. If you think you know how bone-chilling she is, you don’t until you’ve read this issue.

Moving to the backup feature – part one of “A World Without Clark Kent.” Here we return to Earth where the Superfamily, including Lois, Kara, and John Henry Irons, find themselves in the difficult position of dealing with Thao-La. More specifically, the problem isn’t Thao-La herself, but her effect on the recuperation chamber Irons has erected to sustain and heal the injured Phaelosian.

This is where the two stories – the “what are they doing on Earth” and the story of the Warworld revolution, begin to converge and affect one another – and by the end of the 8-page feature, we’ll begin to have a sense of how that could be.

And then right there on the last two pages, Kennedy and artist David Lapham toss a new development at us with the potential to throw a wrench into the already faulty gears with the return of some familiar faces.

In contrast to the heavily heroic/fantastical renditions of Federici and Conrad in the main story, Lapham’s characters have a softer, more human/down-to-earth quality that seems appropriate for the more low-key, and mostly non-super, cast.

It’s a great cap to an equally great issue and I’m looking forward to seeing how these two storylines interact and affect one another in the months to come.

Various pieces are beginning to fall into place at a slow-but-steady pace – as is to be expected with the recent announcement that the Warworld saga is coming to an end within the next handful of months. I’m a bit sad to hear that, to be honest, but despite that, I know it’ll be a whole new, and just as exciting adventure.