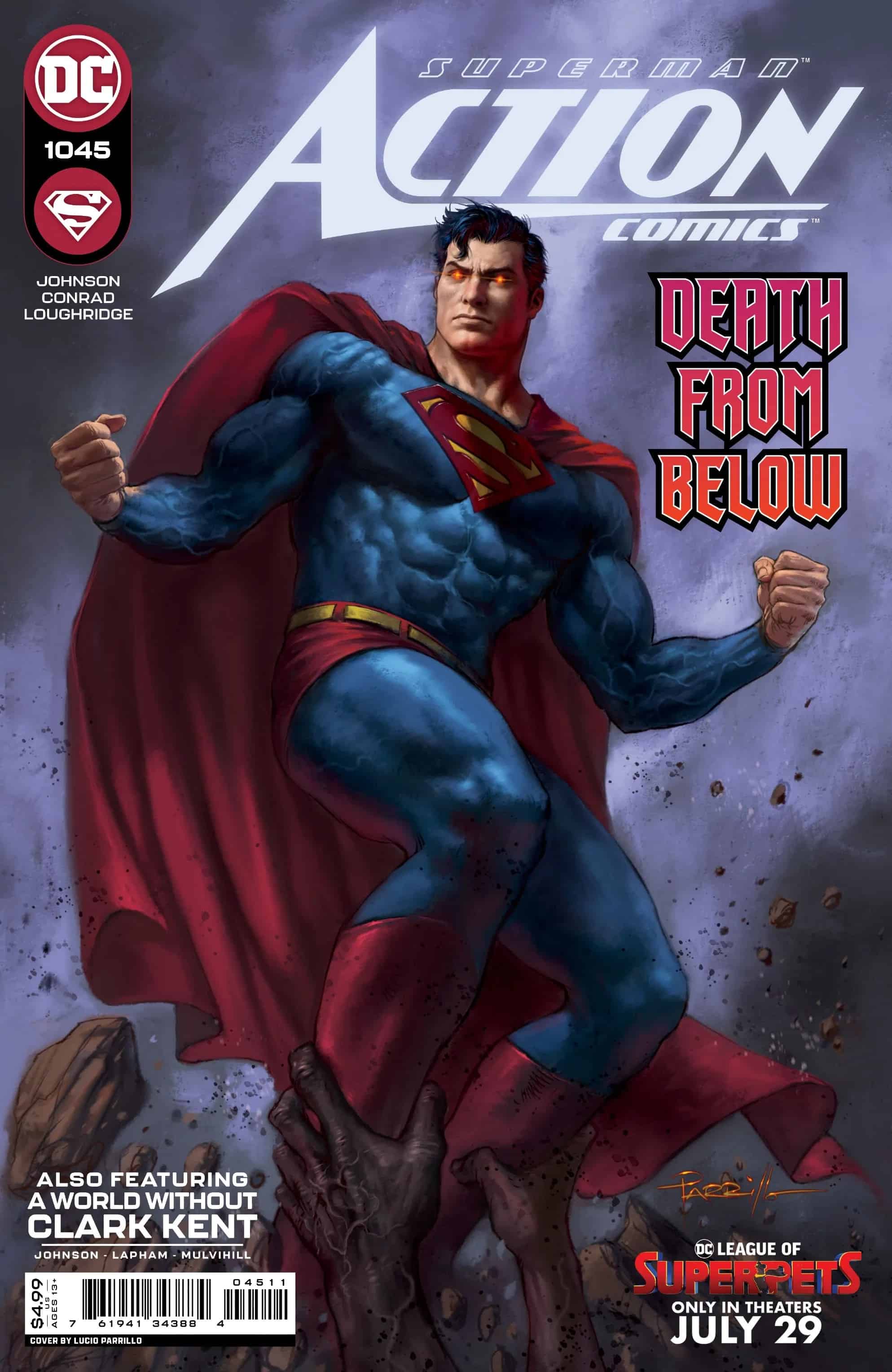 The Superman-led revolution suffers a significant setback when Mongul unleashes his Unmade, including former Authority members OMAC II, Apollo, and the woman once known as Lightray, now remade as the Black Razor. With some of Earth’s strongest former heroes now controlled by Mongul, the rebels are forced to rethink their strategy... and accept some hard risks that could easily backfire.

And, in “A World Without Clark Kent” Part Two, the Superfamily faces off against Conduit, who has been dispatched to retrieve the Genesis Fragment.

When last we met… Mongul had just used the corpse of undead witch Mother to revive the deceased Lia Nelson – a twisted fulfillment of the promise made to OMAC II to revive her. Now we see the results as the Mongul-controlled Darling, OMAC II, Apollo and Black Razor (Formerly known as Lightray) defend his interests with an outcome that is no less than catastrophic. If there is good news, it is that OMAC II has finally begun to understand that when you make deals with the devil you can’t expect to come out ahead.

The other good thing, if you want to consider it good, is that desperation breeds innovation – both technologically and strategically. Backed into a corner, our heroes split into three groups, each pursuing a different, dangerous, goal: Midnighter, Khaljo, Manchester Black and Enchantress defend the rebel camp and seek a way to free the former Authority members from Mongul’s grip. Natasha Irons, Leonath, and Orphan are dispatched to a star forge with the goal of altering its radiation to empower both Clark and the Phaelosians. Finally. Clark himself takes Kryl-Uk (and the adorable rebel children) on a quest to locate the Fire of Olgrun before Mongul can get his hands on it.

If you think this seems a bit like the part in a fantasy story where the party breaks up and has their own adventures for a while before coming back together for the climax, you’re not alone! I can’t stress enough how much this issue makes me think of fantasy games, D&D campaigns, or epic films and novels. The Warworld Saga has always been more fantasy than Superhero or even science fiction, and nowhere is that clearer than in Action Comics 1045 – we even have Clark and Kryl-Uk going on a quest to retrieve a magical artifact!

That’s not a complaint. Superman has always felt a bit more like a science fiction character than a fantasy one, to me – fantasy was the domain of Wonder Woman in my mind – but in the end, the best characters are genre-defying, and work in any environment, or at least more than one. With Superman and fantasy the story stands out in part because it’s somewhat unexpected for Superman. It’s also helped by Superman’s loss of power, which leaves him more vulnerable and forces him to think strategically, relying on his intelligence to plot a path to victory, and his goodness-fueled charisma to keep the revolution going in the face of seemingly impossible odds.

One of the things I love in the scenes of Team Superman is seeing Clark take and accept criticism without complaint… and admit when he’s wrong and needs to readjust his thinking and his assumptions. For all his good intent (and, well, goodness), Clark is Superman – he is rarely in any serious danger. That’s changed now – not only is he at risk due to his power loss, he is also carrying these people’s lives on his back. That means he needs to think outside the box all while trying to maintain his ideals and protect people as well as he can. Ultimately, his ability to be wrong makes him more human, and his lack of ego coupled with his willingness to listen and change is what makes him Superman, also known as the best person in the world.

All of this leads to a revelation about one of the characters I’ve been most curious about for some time – and sets up for what looks to be a truly epic issue 1046, which I really can’t wait to see.

This issue has – I think? – a guest artist, albeit one quite familiar to readers: Will Conrad, this time joined by Brent Peeples. Ricardo Federici is a tough act to follow (or sit side by side with), but Conrad and Peeples rise to the challenge admirably. The page of Apollo raining death on the rebel citadel is terrifying with the man himself resembling an angry god with his face obscured by shadow and fire on his fingertips. This may be a strange thing to say but the angles and rendering on his body make him look a bit, well, nude which I’m mentioning because it ends up adding to that angry-god impression, especially when coupled with color artist Lee Loughridge’s intense reds and oranges.

Speaking of the color artistry here, Loughridge’s work is always on point but the opening and final pages of the main feature stand out to me – maybe because I have a weakness for the monochromatic moment.

Once the team splits up, the mission to free their comrades is left untouched for now. Natasha, Leonath, and Orphan’s quest, on the other hand, is essentially the second major plot of the issue and it revolves around the creation of a machine called a Genesis Reactor. This machine – its creation and purpose – is a featured part of the backup story from this and last issue… which brings us to exactly that!

“A World Without Clark Kent” (Johnson and David Lapham) keeps us clued in to events on Earth as Lois and John Henry Irons (along with guest stars from afar Natasha Irons and Leonath) seek to save the ailing Thao-La, who was recently incapacitated during a battle Mongul’s minions. Now the Phaelosian is in desperate need of healing energy… but the genesis fragment that can provide it also delivers toxic radiation to her system, making it more dangerous than helpful. Fortunately, they’ve reached a breakthrough in her treatment, as John Henry Irons has created a machine capable of filtering out the radiation and delivering pure, healing energy to Thao-La.

Unfortunately, returning supervillain Conduit couldn’t care less about her health. Sent by Amanda Waller to retrieve the Genesis Fragment, he is determined to carry out his mission regardless of the impact on Thao-La or anyone else… because Conduit is an anti-alien jerk who deserves the Warhammer smackdown he gets from John Irons, not to mention Lois’s even more assertive response.

As previously mentioned, the backup ties back into the main feature, showing when and how Natasha Irons came to the idea of converting the war engines’ energy to begin with… which I love. The interplay between backups and main feature adds substance to both and allows Johnson to cover Metropolis ground in ways that the Warworld chapters would struggle to permit.

Overall, great issue! I’m eager to see where that final revelation in the main feature goes and excited to see the results of… the last page of the backup feature. Really, I say this almost every month, but…

If you’re not reading Action Comics, what are you doing with your life and how soon can you stop doing it and go read Action Comics? Because you should do that.

Johnson’s Superman is the Superman I want to see. He is consistently idealistic while being grounded and accessible, intelligent – and just as importantly, wise – and absolutely kind, compassionate, and good to the core. Not only that, he is all of these things in a way that is aspirational without turning Clark into a flawless mannequin character. And honestly, what more could you ask for from Superman?