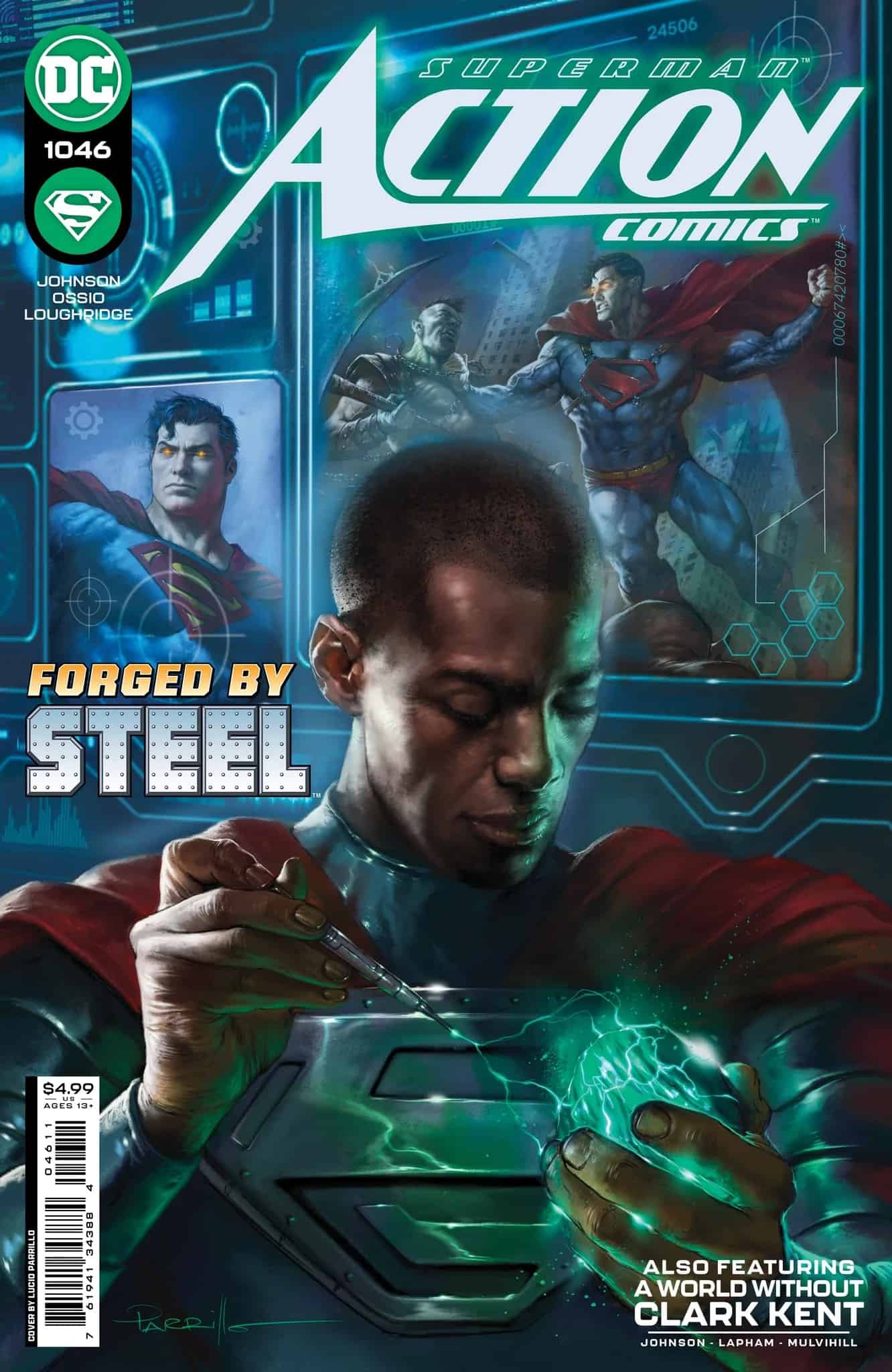 Superman’s mission to free Warworld from servitude is rapidly nearing its end! Clark himself faces off against a servant of the First World god of gods to claim the powerful Fire of Olgrun. Little does he know that a gauntlet of trials awaits him even if he manages to prevail.

And in A World Without Clark Kent, the Superfamily rallies to stop Conduit as he attempts to flee with the Genesis Fragment.

The penultimate chapter of Phillip Kennedy Johnson, et al’s Warworld epic begins swinging and keeps going from there. As seen at the end of the previous issue, we find Superman and friends faced with a massive worm-like monster where the storyteller Byla-Esh once stood. Overcoming this creature is difficult; it’s also but the first of the trials Superman will have to face. At the end of this gauntlet lies his goal: the Fire of Olgrun, which he absolutely must recover if only to prevent Mongul from reaching it first.

Of course, not all the trials are as straightforward as the first. Along the way, Superman’s body, heart, will, and mind will all find themselves tested, forcing him to reveal his true character. Of course, this is Superman – more than that, it’s Superman as written by Johnson – and he has never tried to hide that character to begin with. However, even if he manages to emerge from the other side of these challenges victorious, that doesn’t mean he’s won. Sometimes even acts of kindness can backfire, after all.

The next issue of Action Comics looks to bring Clark Kent back to Earth… but not before the Warworld Saga reaches its conclusion in Superman: Warworld Apocalypse, a one-shot due out next week. In the meantime, Warworld Revolution Part Four does an excellent job of ramping up the stakes while giving Superman a chance to prove himself worthy of the name. His kindness, compassion, and bravery are all on full display here… along with a faith in people that ultimately may end up detrimental to him. Then again, this being Superman, he may turn the tides on even that.

For this issue, Johnson is joined by artist Fico Ossio. Now, I didn’t recognize Mr. Ossio’s name. Still, a quick google lets me know that I have seen his work before, most recently on the beautifully illustrated Aquaman backup in the Dark Crisis: Worlds Without A Justice League – Superman special. Ossio’s work is an excellent fit for the story here – Sword and Sorcery stylings mixed with a hefty dose of Todd McFarlane and Walt Simonson mixed in there; the former is especially evident in Superman’s cape. Clark is square-jawed and enormous both physically and in terms of his presence, but his face is never harsh, never cold. Rather, he exudes all the good-natured warmth necessary in a well-done Superman. And despite how personable Clark may seem, the artwork never loses its grandeur. Several full-page shots are just epic enough to take your breath away.

Given that we only have one more issue with this story, I think I’ll sit down and reread the entire saga to date sometime before the finale hits. From Day One, it’s been obvious that Johnson understands Superman to the bone. His Superman is intelligent, compassionate, and strong in a way that reaches far beyond his physical power. Watching him navigate Warworld without his full strength has proven that, and I can’t wait to see how it all comes together in one week.

As it stands my only problem has been the frequent artist swaps – I quite enjoyed every one of those artists, but the turnover was a lot. That said, Lee Loughridge’s fantastic, atmospheric color artistry had worked wonders at creating and maintaining consistency despite the changing styles, so it wasn’t too jarring.

We then join the backup, A World Without Clark Kent Part Three, which picks up just where last month’s installment left off. Conduit had managed to grab the Genesis Fragment and run, but it’s difficult to escape when you’re pursued by most of the Superman family. Still, while his kryptonite-fueled power makes him dangerous, the arrival of Jon Kent, the current Earth Superman, seems likely to turn the tide. The question is, what will happen to the Fragment – and Thao-La, whose life seemingly depends on it?

“A World Without Clark Kent” is a quickly moving story designed to hook into and support the main feature and, like the main feature, it is set to conclude in next week’s Superman: Warworld Apocalypse one-shot special. I’m curious about whether it will conclude as a backup or have its plot woven through the main plot in old-school comics style. Either way, I’m anxious to see how things work out – particularly given the surprising turn of events on the last two pages.

With both the lead and backup stories ending on something of an “Oh no!” moment, the finale is looking to be quite a ride.

This entire epic has been, well, epic – a display of everything that makes Superman the greatest superhero of all time. Action Comics 1046 just brings that all home, demonstrating Clark Kent’s resourcefulness and determination as well as his bottomless compassion. I’m a little sad to see the Warworld saga coming to a close, but excited to see what comes after.