Action Comics #1049: Facing the Fight Ahead! 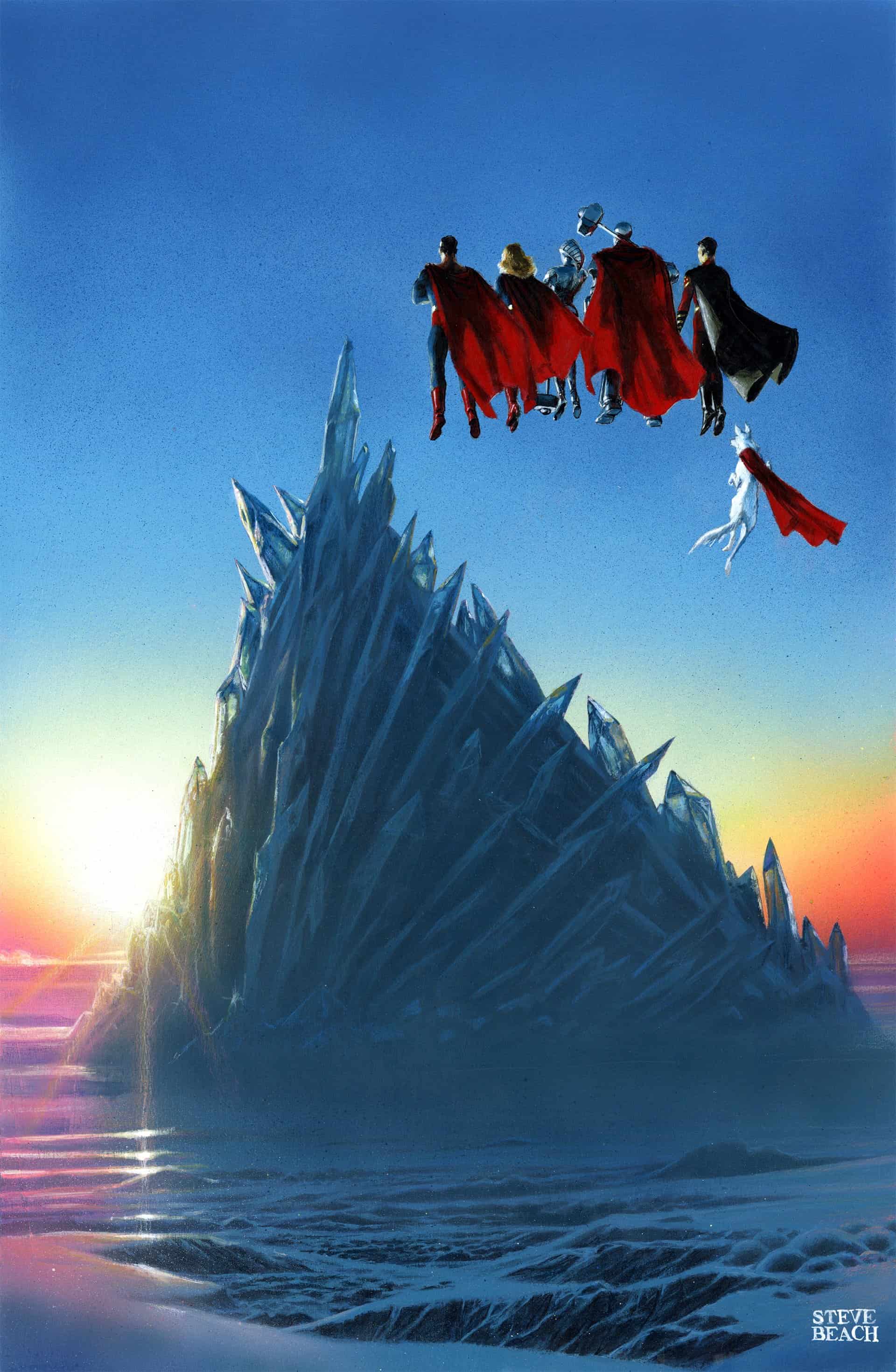 The forces of Apokolips have descended on Metropolis in pursuit of Olgrun’s flame, currently stored inside Osul-Ra, a Phaelosian child and refugee from Warworld... and they’re willing to take the child by force if necessary. Superman is more than ready to protect him, but is he powerful enough to take on Orion and Kalibak? We’re about to find out. Meanwhile, a reluctant Metallo is dragged out of retirement through the machinations of the one and only Lex Luthor.

In the wrapup to the Warworld Saga a few months ago, the Phaelosian child Osul-Ra was caught up in the battle between Superman, Mongul, and Superman’s “ally,” Kryl-Ux. Despite being fatally wounded, he survived with the help of the mysterious Fire of Olgrun, which Superman gifted to Osul in order to raise him from the dead. The consequences of that action were unclear at the time, but as of Action Comics #1048 we are seeing the beginnings of what it means going forward. First on the list, we have the arrival of New Gods from both Apokolips and New Genesis, each bent on collecting the fire – and ultimately Osul-Ra himself.

Metron, the representative from New Genesis, is primarily a passive observer as he tends to be. The Apokolipsian corner is very different, to no one’s surprise. Apokolips’ entourage includes the current ruler of the hell-planet, Orion, as well as his half-brother Kalibak and the famously sadistic Desaad. To say their approach is more “direct” would be an understatement. Fortunately, Clark is currently super-charged (pun neither intended nor regretted) by the white sun of Warworld… which makes the battle more complicated than the Gods had anticipated.

Moreover, it’s not just Superman that stands between the New Gods and their goal. The biggest danger of them all may be Osul himself, and the shard of the Old God Olgrun that lives within him. A shard that may be more active – and more conscious – than anyone had anticipated.

If dealing with angry gods descending upon his city does not give Superman quite enough to do with his time, Lex Luthor has that covered. In classic form, Lex decides to take down Superman via John Corben, also known as the classic Superman foe, Metallo. The problem is that John himself is just not interested. He’s moved on from his supervillain days and found a quiet routine as a permanent resident of Stryker’s Island Penitentiary, where he lives for simple pleasures, like books and weekly visits from his sister, Tracey.

Lex Luthor does not take rejection well. And wouldn’t it be a shame if something happened to Tracey?

So, this issue is Part 5 of the Kal-El Returns storyline that stretches across both Action Comics and Superman: Son of Kal-El… kind of. If you follow the numbering on the covers the way I did, you will end up bouncing from a cliffhanger in the Superman vs. New Gods fight into a laid-back slice-of-life story about Jon struggling to come out to Clark, and then right back into the fight. This isn’t really a big deal, but it is an odd decision to bill both books as numbered parts of the same story is actually a little awkward, given that the books don’t really match up or have much to do with one another in terms of story.

Nitpicks aside, this is another strong issue. After a few years of fun and sort of wacky hijinks with Luthor – years that found him joining the Justice League, becoming the acolyte of a dark creator goddess, and casting away his humanity for power – it’s refreshing to see Lex being his classic Superman-hating anti-alien human evil genius self. While the Joker may well have surpassed him in pure fame and popularity by now, Lex remains one of my personal favorite classic villains, and he is more relevant than ever in the increasingly oligarchical modern world.

Phillip Kennedy Johnson’s take on Clark has always resonated with me and now is no exception. The blend of his deeply human and transcendently aspirational qualities makes for a potent mix. What’s more, Johnson never fails to build on and up the connective tissue between his run and previous runs. The best recent example of this is from the last issue but I’m mentioning it anyway because I was unable to review it at the time: the flashback to Jor-El taking Jon that was triggered by Orion’s demand that he turn over Osul-Ra. It was so beautifully done, just a quick flash that immediately situates us inside Clark’s mind, lets us in on his motivations, and allows us to feel the depths of his determination not to permit a repetition of his great regret from the past. Just beautiful stuff.

Like the previous issue, Action Comics #1049 is beautifully illustrated by Mike Perkins, undoubtedly one of the best artists working in comics right now. On the surface he seems like an odd choice for Superman – his work is stunning, but also heavy on blacks and a bit moody. It reminds me a bit of Gene Colon in tone, though their styles aren’t especially similar. That said, the grandeur he brings to the page is fitting for a battle between gods, and the darkly atmospheric Stryker’s Island scenes are worth the price of admission alone.

We leave off in an interesting place this issue, with a revelation that should prove extremely consequential, and many parts set into motion that I can’t wait to see land and sort themselves out.

In our backup, Johnson and Lapham’s “Red Moon Part 3,” we continue to track the fallout from the fall of Warworld. Chaytil, veteran Warzoon and follower of the most recent (and now thoroughly deceased) Mongul, seeks to avenge the fall of Warworld and the death of his leader. he knew. Lurking beneath Metropolis, he commands what amounts to a kaiju and plans to destroy the city from below. Unfortunately for him, Supergirl and the recently empowered Thao-La are present and the latter knows Chaytil’s ways well enough to anticipate his actions.

When we first encountered Chaytil way back in the leadup to the Warworld saga, I have to admit I didn’t think about him all that much. It’s not uncommon for villains to have a right-hand henchman, after all – someone who puffs their ego, talks crap to their enemies, and is generally a true believer in whatever it is the villain is up to.

That being the case, I’m pleased to see his character given greater consideration and weight than that. He isn’t just a yappy underling, he is a veteran warrior and a dangerously cunning foe regardless of his physical disabilities. Someone who might be of use, for example, to an up-and-coming warlord or conqueror…?

Well, that’s all I have to say about that, but let’s just say that this, the final part of Red Moon, makes a point of situating the character for further stories. It’s going to be interesting to see where these characters go from here, and how the echoes from Warworld’s fall continue to ripple outward.

Another great issue! Action Comics #1048 blends superheroic smackdowns and emotionally charged family drama to great effect, while simultaneously moving the characters into position for whatever comes next. It’s great to see Lex Luthor back in full classic form as well – I never thought I’d feel this badly for Metallo but here we are. I have a feeling that I’m going to miss the current, more focused format when the book changes in January.

Action Comics #1049: Facing the Fight Ahead!