Action Comics #1051: Dawn of the Superfamily 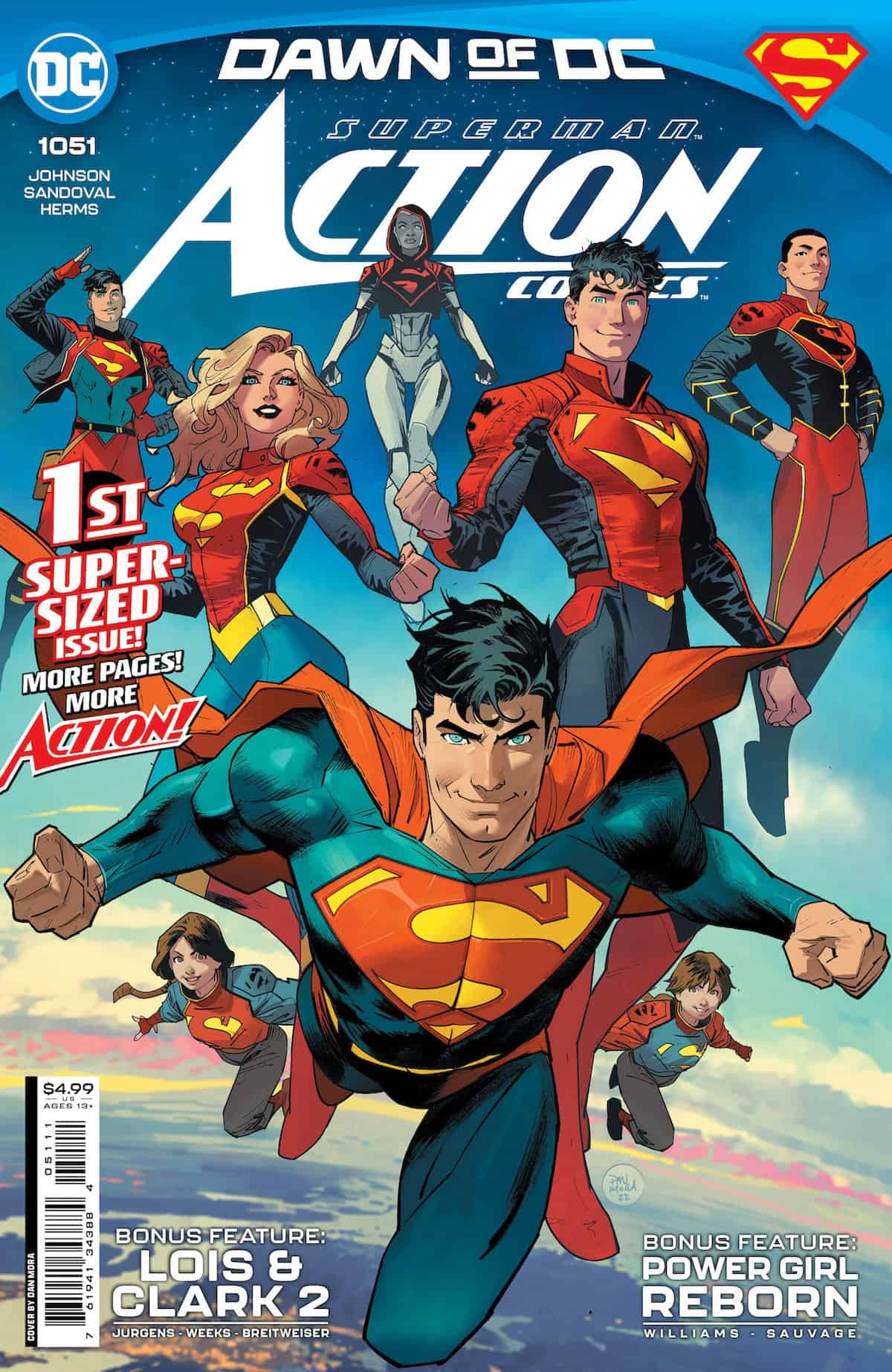 A new day dawns in Metropolis as the newly refreshed Superfamily starts in a new direction, incorporating new members, new costumes, and a new approach to the superhero game. Unfortunately, not everyone is as excited about the changes as the family is, themselves. A new anti-alien movement has sprung up in the city... and if that weren’t enough, the world’s foremost anti-alien force, Lex Luthor, is about to unleash his secret weapon: the kryptonite-powered John Corben... Metallo!

Also included: a return to the farm for the Kent family as they go back to the long-abandoned home where Jon Kent was initially raised way back during the end of the New 52 and the beginning of the Rebirth era. And Power Girl begins a new direction, teaming with Omen of Teen Titans fame to assist in psychic healing for the traumatized Beast Boy.

In recent years it’s become common to cycle through various publishing initiatives at DC – every DC Fan knows it! We’ve been through Rebirth and Infinite Frontier, and now we’re beginning a new phase, dubbed the Dawn of DC. This means new directions, new costumes, and characters both old and new propelled into the spotlight, sometimes for the first time in years.

All the above are featured in Action Comics #1051, the first issue of the legendary series’ new direction. This is also the first issue of its new format, with a primary feature by Phillip Kennedy Johnson and Rafa Sandoval, as well as two backup features. This time around the lineup includes Lois and Clark by Dan Jurgens and Lee Weeks, as well as Power Girl by Leah Williams and Marguerite Sauvage.

The lead feature, “Speeding Bullets Part 1,” introduces the reader to the new status quo, which includes the first appearance of the restored Clark Kent secret identity as well as the debut of the Superfamily of the future.

So, right, the Clark Kent thing. As most know, Superman has spent the last several years without a secret identity. Well, as of the last issue, Lex Luthor used the last power of the now-deceased Manchester Black to install some sort of psychic block on the world to prevent them from knowing or figuring out Superman’s identity. Violation of this “rule” results in very serious health consequences – consequences that landed Perry White in the hospital when Clark attempted to interact with him sans secret.

As explanations for the return of the secret identity go, this isn’t a bad one. It’s hard to put that genie back in the bottle, after all, and this time around we were spared time alterations or retcons. It does kind of make me wonder what happened to all the video footage and newspaper articles – but overthinking comics is the death of fun, so I’m just going to take the ride as it comes.

The return of Superman’s “anonymity” may also be helpful in avoiding some of the consequences of a rising anti-alien movement, called Blue Earth. This movement comes to prominence in this issue as they picket a press conference headed by the Steels, John Henry, and Natasha Irons.

Also coming to prominence at that same press conference is the new Super Family, which includes Supergirl, Superboy (Conner Kent), the other Supermans, Jon Kent, and Kenan Kong, and new arrivals Otho and Osul, who have been dubbed the Super Twins by the media. The entire team has taken on something of a uniform look with costumes that more or less match one another in style, with the obvious exception of Clark himself, who retains his classic threads.

And, it’s not just the public face of the Superfamily that is changing – behind the scenes an announcement is made within the family itself that changes its composition for the foreseeable future, with as yet unknown consequences.

Speeding Bullets has a lot of ground to cover, from the status changes to the long-awaited return of John “Metallo” Corben. That last one has been slowly building for months now, bringing Corben from an angry robot body in a prison cell to a seemingly human kryptonite container, and doing so while infusing him with the kind of sympathetic pathos that makes for a complex and interesting villain. I can’t say I’ve ever had a great passion for Metallo but as it stands I’m genuinely interested in what happens to him – if there’s one thing I can say about this most recent run on Action Comics, it’s that Johnson has done a great job of taking villains I didn’t care about at all and making me respect them as forces (Mongul) or feel for them as people (Metallo). This isn’t an excuse for Metallo’s actions or his prejudices, but villain or not, I prefer a complicated character over a simpler one any day.

Despite having several moving parts, Speeding Bullets never feels rushed or crowded, and there is plenty of character beats to keep things interesting and personal, including one moment that will probably haunt Jon Kent’s nightmares for years to come (cough). Overall, it’s a strong base upon which to build the future of Superman comics… the only thing I’m not sure about is the matching costumes. Hmm, gotta think about that one.

Sandoval’s artwork is always enjoyable, this issue grits it up a little – it’s less smooth and shiny and more humanized in a way that remains lovely, and makes for a really interesting fit/balance with the Lee Weeks work in the next story.

The first of our backup features this month is “Home Again,” by legendary Superscribe Dan Jurgens with Lee Weeks on artistic duties. This story is an interesting throwback of sorts, while also bringing a past story into current continuity more firmly and with slightly less confusion.

For those who may not know, in the last days of the New 52, DC made some moves away from the rebooted continuity and toward what would become the Rebirth initiative and its associated continuity. One of the odder choices made at the time was to bring the Post-Crisis Superman into the rebooted New 52 world, positing that he and Lois had been timeline refugees living undercover on a farm. Ultimately, the New52 Superman was killed, and then the two were combined into the current Superman who is, more or less, Post-Crisis-compatible – I’m not even sure if there are any traces of the New52 continuity left in him at this point.

In any case, it’s always been slightly confusing to me how those things fit together, so now we have an answer – the farm is in, but as a shorter-term respite during Jon’s early years rather than a 10-year withdrawal from the public eye. Now, in the aftermath of Superman’s showdown with Doombreaker in the Death of Superman 30th Anniversary Special, Metropolis is in a sorry enough state that Perry White has given everyone the order to telecommute, and the Kents decide to do so from their old farmhouse.

It’s a sweet throwback, really – I was never that into the Lois and Clark on a farm concept, personally, but if there’s anything following Jurgens’ run on Ric “Nightwing??” Grayson taught me it’s that a consummate professional can make even unappealing concepts enjoyable. The down-to-earth feel of the story is further enhanced by Lee Weeks’ masterful artwork. Weeks is always a great choice for any superhero story that relies as much or more on the humanity of the characters involved as their superhumanity. I’m also positive that a lot of people will love seeing Jon’s child self again, as his age-up seems to be a sore spot among readers, to say the least.

The second backup, “Head Like a Whole” by Leah Williams and Marguerite Sauvage seems poised to start Power Girl on a new and genuinely surprising path… and with a surprising partner, as well. During Lazarus Planet, Power Girl’s abilities were altered to include telepathy (!), including a seemingly permanent psychic link to Lilith “Omen” Clay, one of the lesser-known of the 60s Teen Titans. Now, I’m going to say I think this is incredibly strange. That isn’t meant to be an insult or a complaint, it’s just not at all anything I would have expected from a Super-character. They have always been, by and large, physical characters. Moreover, Power Girl herself has always been a Justice Society type with no substantial connection to the Titans.

That said, it’s an interesting path to take – the road well-traveled is not always the road best traveled, so to speak. It’s interesting to see Karen, often portrayed as a hot-headed and aggressive type, taking on a more meditative role as a… psychic therapist? That does seem to be where this is going, which is fascinating – I’ve always lamented that DC doesn’t have a superhero therapist the way Marvel does, and it looks like that might be changing, albeit in a less traditional way. Given that the last time DC attempted to address mental health issues among their heroes the result was a mass murder (see Heroes in Crisis), a change in approach may be called for anyway. If it sticks, then good for DC, they need it.

The artwork in this story also needs a special mention. While Sandoval and Weeks’ work kind of fit together – both coming out as the somewhat grounded side of superheroics, with one (Sandoval) leaning toward the super and the other (Weeks) toward the human element, Sauvage’s work is bright, slightly whimsical and extremely pretty. It almost reminds me of something I’d see in a fantasy comic.

Much like the lead story, my only real note of uncertainty is the new costume. But it does fit this role more than her classic one, so I’m amenable.

Altogether, three very enjoyable stories. The Power Girl tale is the one that surprised me the most, and I haven’t quite decided where I stand on this new direction for her. There are so many other characters that would have come to mind for this role/connection to Lilith, but I do think perhaps the choice is meant to be unexpected and a little odd, so we’ll see how it shakes out as time goes on.

Action Comics #1051: Dawn of the Superfamily