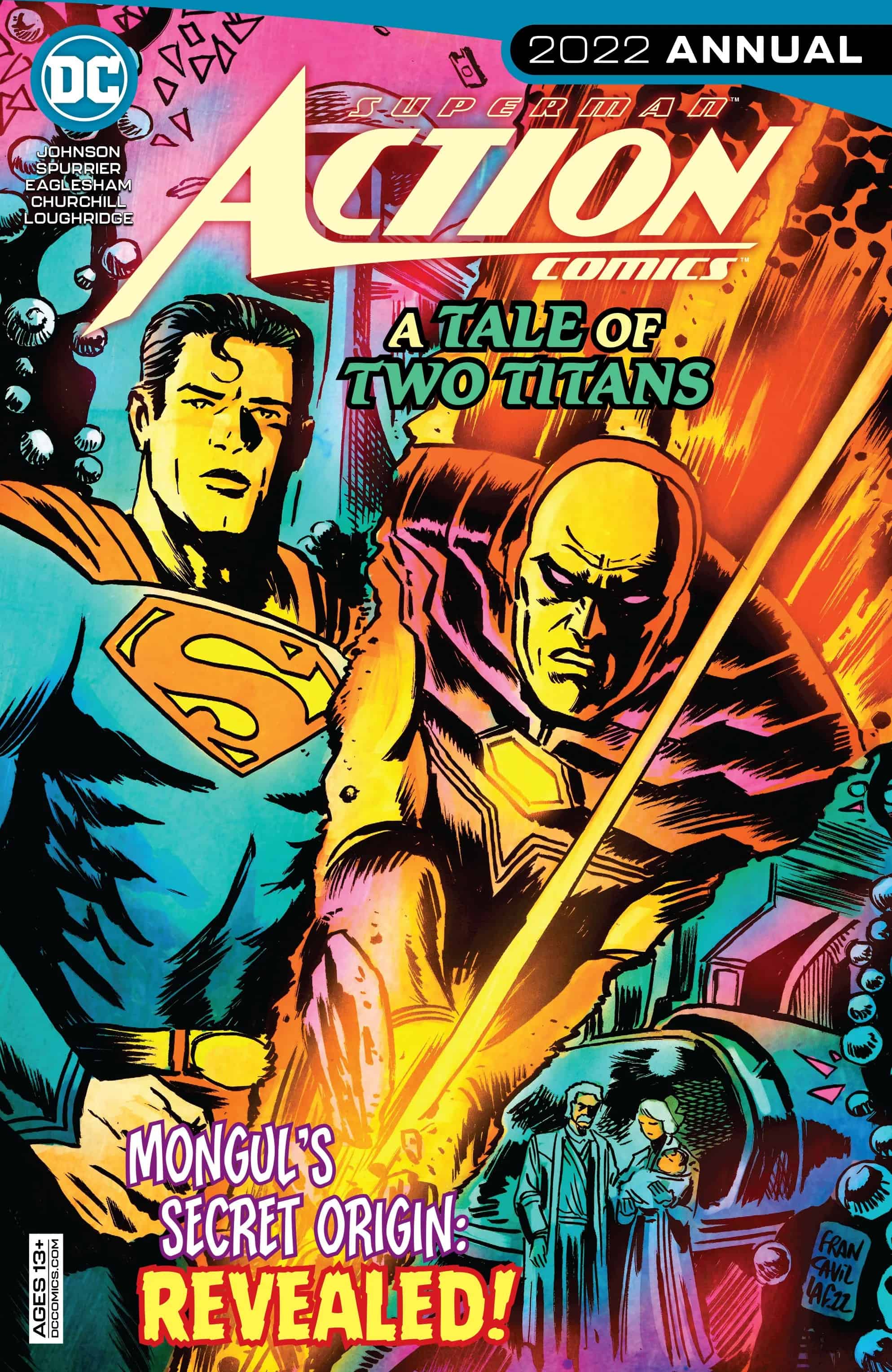 Mongul-that-is has not always been the Tyrant of Warworld. Clark Kent has not always been Superman. Once upon a time, they were children, then adolescents, and then young men, each forced to make choices that would ultimately define who they became. This is a look at some of those choices, the reasons behind them, and the ultimate outcomes that followed.

There are a few approaches to writing comics. You can deconstruct – expose the dirty underbelly of otherwise heroic figures in ways that challenge their archetype and, at times, even the conceits of the genre itself. You can go into reparative mode – seek to undo things you didn’t like or recreate things you did like. You can tear down or build up. You can also build deeper, and while your mileage may vary, for me that often leads to the most satisfying takes on established superhero characters.

Building deeper is really where the current Action Comics excels, adding culture and perspective to Warworld, which has often been little more than a planet-sized metal plot device. With guns.

Until roundabout now, one thing that has been left open for consideration is Mongul himself. Who and why is he? How did he come to rule over Warworld? Action Comics #1043 began to answer that question in a larger sense, going back to the first of his name, exploring how he rose from the ranks of Warzoon warriors to become the original Mongul. That leaves us with the current Mongul, perhaps the most brutal tyrant in a long line of brutal tyrants. How did he come to be who he is, and why?

This issue holds the answers, told through the story of his development, and contrasted with the path of his nemesis, Superman.

To begin their journey to opposite paths, they each begin in a near opposite place. We first encounter Clark Kent as a child who has been caught making use of his abilities for personal advantage. It’s a little thing, just a puff of super-breath as an act of retaliation against a classmate, Caleb Withers. Caleb is a new arrival in Smallville, and upon arriving he immediately set himself to troublemaking, throwing things at others and calling people names – he even insults the completely uninvolved Martha Kent. Yet, even when Caleb knocks the wig off of Martha’s head, revealing her bare head and thus her struggle with cancer, Martha remains steadfast in her advice to her son: choose carefully how much he shows of himself, and act without pettiness or cruelty. Of course, Clark is a child so he isn’t as worried about fairness and so he sets off into the night for revenge.

Meanwhile, on Warworld, we meet the future Mongul – original name unknown – during a brutal ritual called the Culling Day. Here, the children of Warworld fight to the death, and the weakest survivor is exiled along. Also exiled is the mother of any banished child, presumably for the crime of birthing a weakling. When the boy who will one day be Mongul fails to take advantage of an opening to slay a distracted foe, he displays an honor and mercy that is unacceptable among Warzoons. Mocked for this by a rival boy – a similarly aged fellow son of Mongul – the future tyrant finds himself dispatched with ease and then banished to the Wastes along with his mother.

Two children, both frustrated with the demands of their world – Clark pushing against the moral limits preventing him from baby vigilantism, and the nameless boy who pushes against the demands of his harsh culture, choosing instead to act with some compassion and thus, to the Warzoons, weakness.

Two rivals, each representing the children’s potential, and precipitous, fall from grace.

Two mothers struggling with the possibility of impending death to disease or violence, each trying to mold their sons into “good” men… by the definition of the culture that defines and confines them.

Of course, we all know where this leads: Clark grows up into Superman and the nameless child becomes Mongul – the latter being a transformation so complete that even his word balloon style changes (courtesy of Dave Sharpe). It’s the old question of nature and nurture. Current thinking tends toward the concept of epigenetics – a fusion of natural inclinations and the circumstances that sharpen, dull, or carve them. Maybe Clark never had it in him to be truly selfish and Mongul would have always embraced the anger in his heart. But here, watching their initial trajectories reverse as Clark leans into compassion and Mongul into his rage, we are left to contemplate what sort of people each could have become in another place, or another life… and what that would have meant for their respective worlds and the rivals that inhabit them.

Writers Phillip K. Johnson and Si Spurrier, along with artists Dale Eaglesham and Ian Churchill, have put together a great story here. When it comes to the writing, I’m not certain which sections are attributed to Johnson and which to Spurrier – or even whether they split the story by sections to begin with. It doesn’t matter as both work together, weaving in, around and through one another to create a single cohesive meditation on the cultural and familial forces that form who a person ultimately becomes.

It’s been quite a while since I last encountered Churchill’s work in the wild this way… I think? Honestly, his style here is so different from (and, in my opinion, better than) the early Image-esque work I most associate him with that I can’t guarantee I haven’t run across him without realizing. In any case, Churchill is the primary artist for the Clark Kent sections, where his work is clean and beautifully detailed, and his young Clark is adorable. Color artist Lee Loughridge approaches these sections mostly with saturated pastoral colors, warm greens, and golds, that lend the Smallville sequences a warmth and charm that stands in sharp contrast to the red-tinted hell that is Warworld.

Speaking of which, the Warworld sections are illustrated by Dale Eaglesham, and they are a pleasure to take in. His work is smooth, fluid and I’ve been a fan of his since his work on Villains United almost 20 years ago (yikes). I believe he spent much of the intervening years at Marvel, which I’m not nearly as familiar with, so I’m pleased to see he’s made his way back to DC in recent months.

So, do I recommend this issue? Heck yes. If you have any interest in Superman, in Mongul, or even just in great comics-as-myth, this is the place for you. And if you haven’t been reading Action Comics, first what in the world is going on with you, and second it’s never too late to start. Start here! Why not? Come for the one-shot and stay for the revolution.

“A Tale of Two Titans” is a thought-provoking exploration of the environment – and even more importantly, parenting – can create the shape of a person. It can be heartbreaking at times, uplifting in other places, and sometimes a mix of both... so just remember to bring tissues when you sit down for this one.