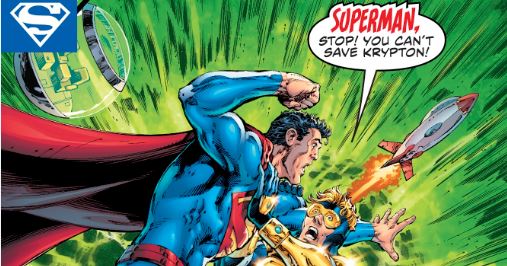 The last son of Krypton is earth’s greatest hero, a shining example of how to treat one another. Thanks to earth’s yellow sun he has been given extraordinary gifts, he uses them to defend humanity as Superman! 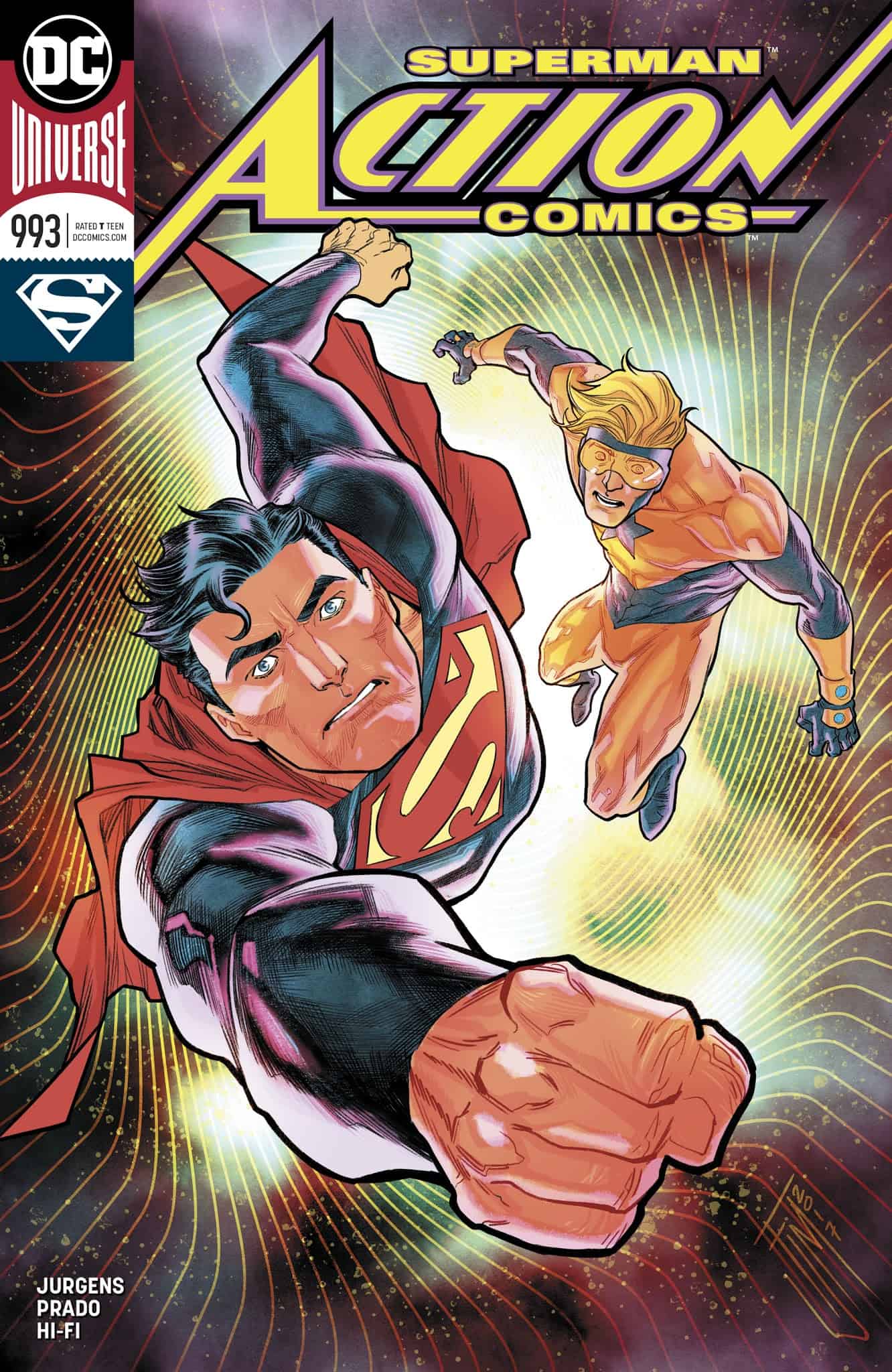 Superman has been through a lot lately from a giant battle with Zod to finding and losing his father all over again, he is struggling to find meaning. After meeting with Hal Jordan of the Green Lantern Corps he has been notified that someone is messing with the time stream. The data recording of Krypton’s destruction has been tampered with, or the time stream itself has been altered. Superman uses Flash’s Cosmic Treadmill to go back in time to moments before Krypton’s destruction to get to the bottom of things. Unknown to him Booster Gold has appeared moments too late to warn Superman not to travel back, someone is messing with time and he might not make it back. 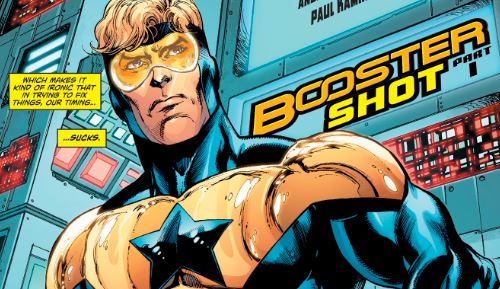 Booster Gold is standing in a Justice League Watchtower trying to figure out what to do next, he missed Superman by seconds, suddenly Flash appears and attacks, saying the Cosmic Treadmill isn’t for people like Booster. Booster tries to explain but Barry rushes to judgment as he often does. 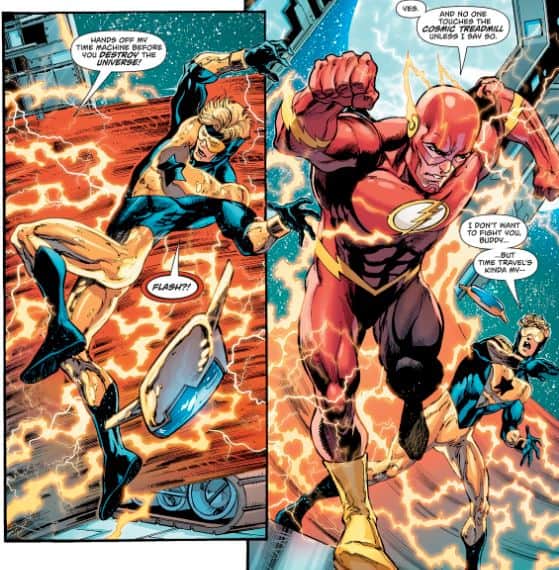 Meanwhile, Superman is riding the time stream, he arrives at Krypton, on the verge of destruction. Suddenly he is sucked into a time vortex, as he rides the storm he sees images flash by, some familiar and some different from what we know, what time stream is this? The chronal storm ends and Superman lands on an intact Krypton. 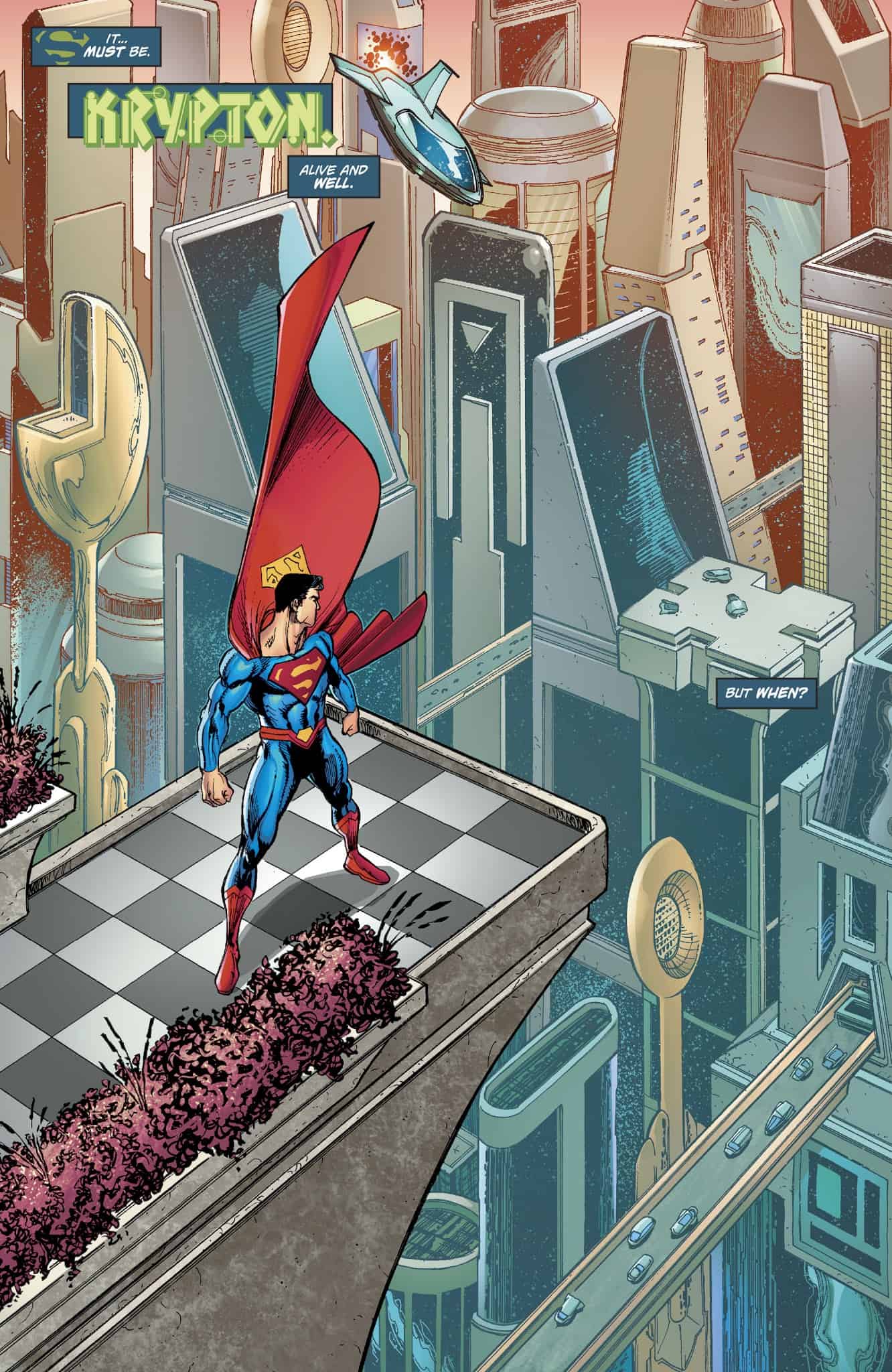 Flash is still attacking Booster Gold and Skeets, suddenly the Watchtowers defenses kick on and knock him out. Skeets says that although turning the defenses on is regrettable they’re in a hurry. Booster loads the Cosmic Treadmill onto his ship so he can follow its telemetry data and takes off after reminding Flash to post a pic of him helping Superman on social media for his fans, next stop Krypton! 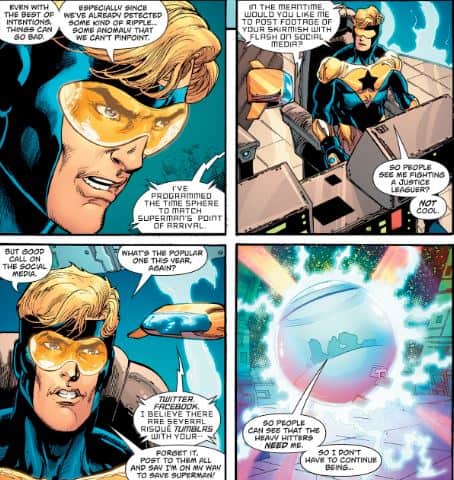 For the rest of the story pick up Action 993 at your local comic shop today!

I’m very excited to have Booster Gold back in mainline DC continuity, I do have one minor nitpick, I’m no expert but I’m pretty sure the cosmic treadmill runs out of the speed force not speed and shouldn’t be able to be run just by running very fast. It’s interesting to see Krypton changing and some interesting things might happen if more Kryptonians are introduced, not to mention what happens with Zod and his wife hiding out on Earth?

The ramifications of time travel are always severe but from what we can tell Dr. Manhattan has already been screwing things up for a lot of people.

The art is predictably very good for DC’s flagship book. This issue overall is pretty good especially the Booster Gold versus Flash fight, I like the two-page splash panel that helps establish the changed continuity and the new Krypton is very well designed.

A solid start to what is certain to be a good arc from Superman legend Dan Jurgens. I’m really excited to see where this arc takes us, and really hope to see more Booster Gold!