The time travelling duo have landed themselves in the nearish future on the planet Jekuul, anyone who read this weeks issue of Hal Jordan and the GLC know what that means! This is Zod’s planet! Or is it? 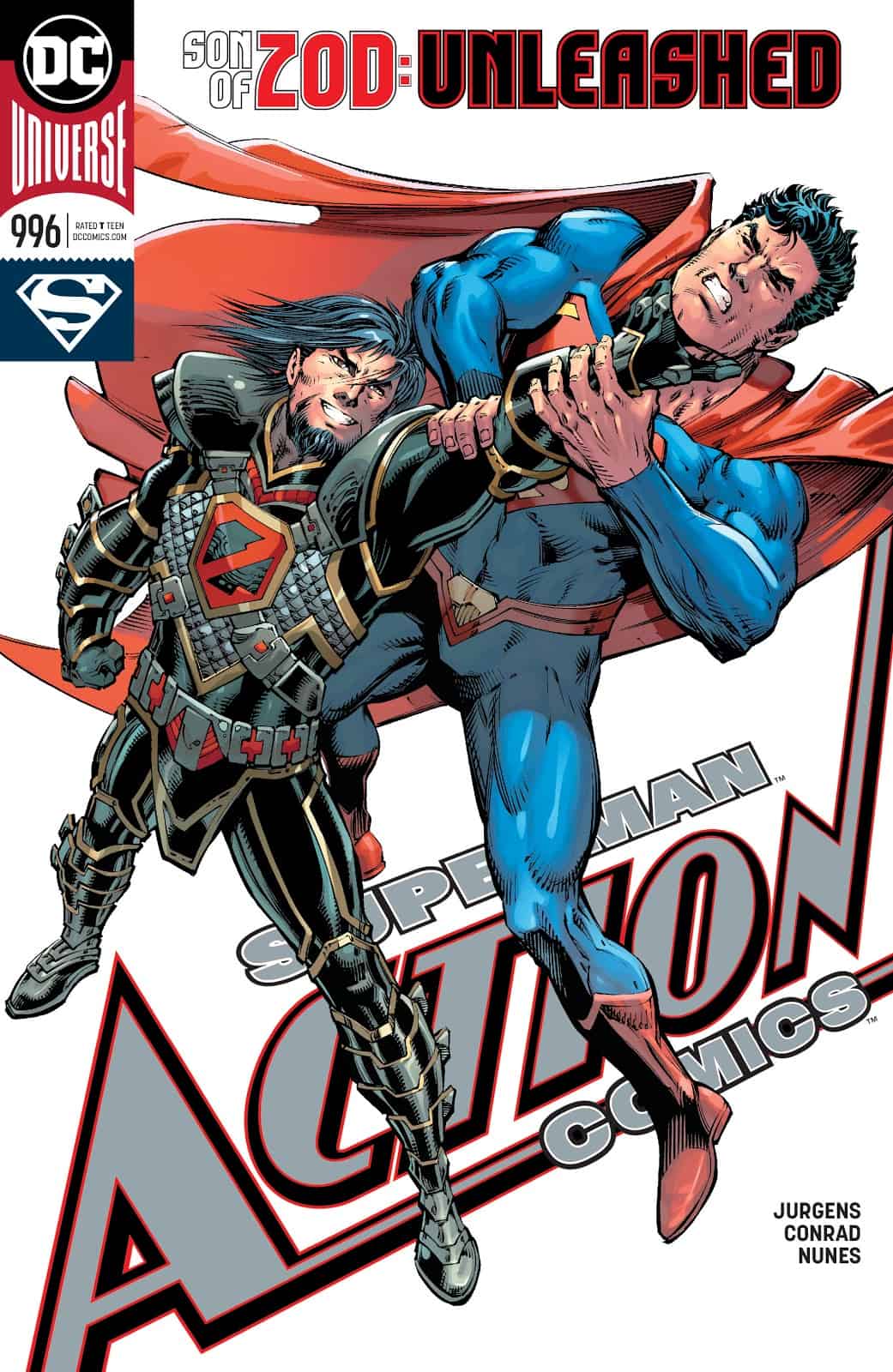 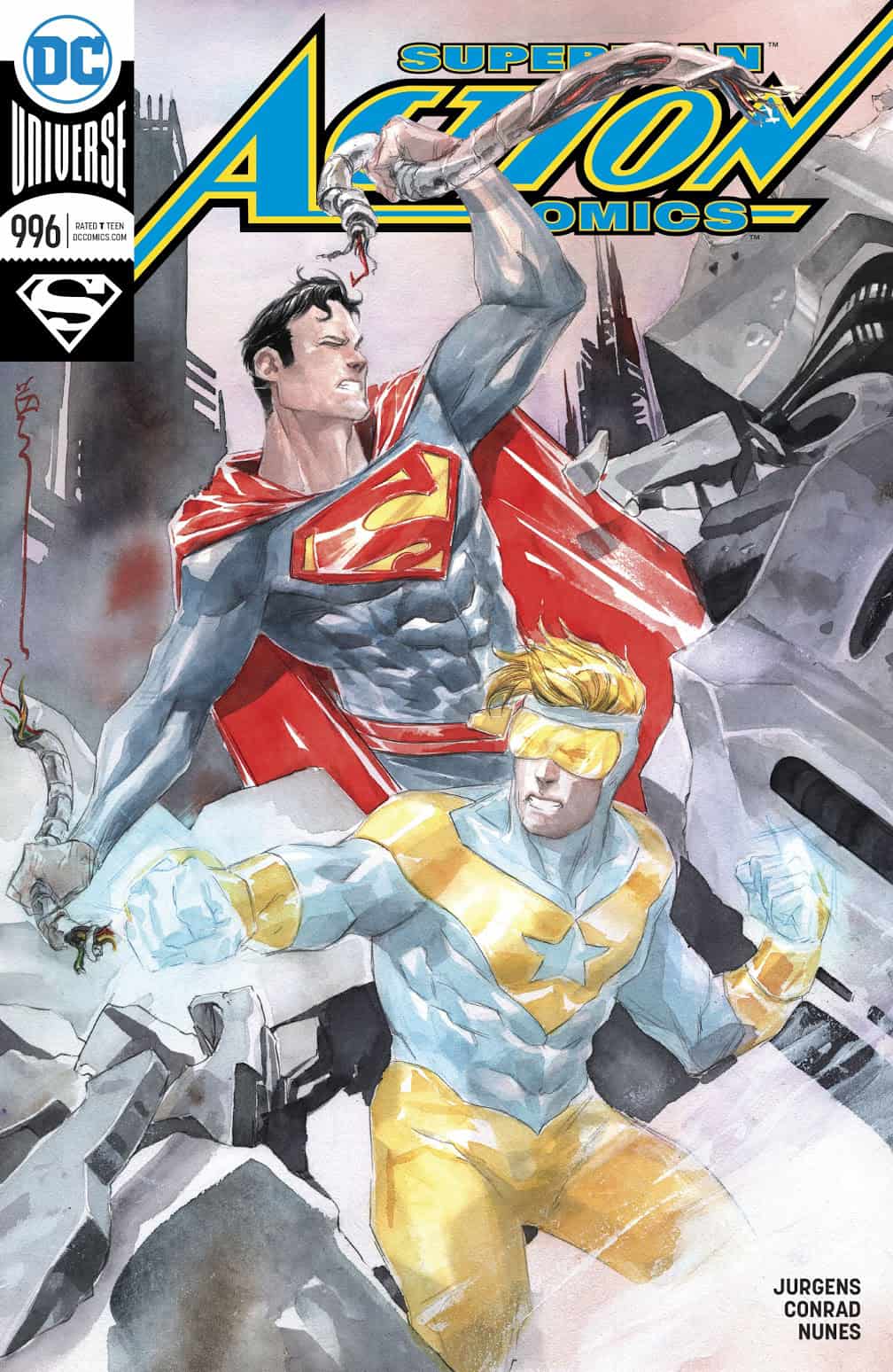 Superman and Booster Gold have been adrift in the timestream following a massive distortion in the timestream while they were traveling back to check on the status of Krypton prior to its destruction. (see my Action #993 Review) The navigation system of Booster’s time ship was damaged, repaired and damaged again, knocking the trio (counting Skeets) around aimlessly in time. Now they are going to have to sneak into a settlement on a far-off planet to find materials to repair the ship, (again…) but they see a statue of a familiar character, and a robot is commanding them to kneel, just where the heck are they?

We open on Booster and Superman, having just landed the time ship somewhere and somewhen, not Earth and not now! What they do know is they’re standing in front of a 40-foot tall statue of Zod! Suddenly a small robot zips up and commands them to kneel if they are subjects of Zod, neither hero does and after repeated requests Booster blasts it out of the sky. 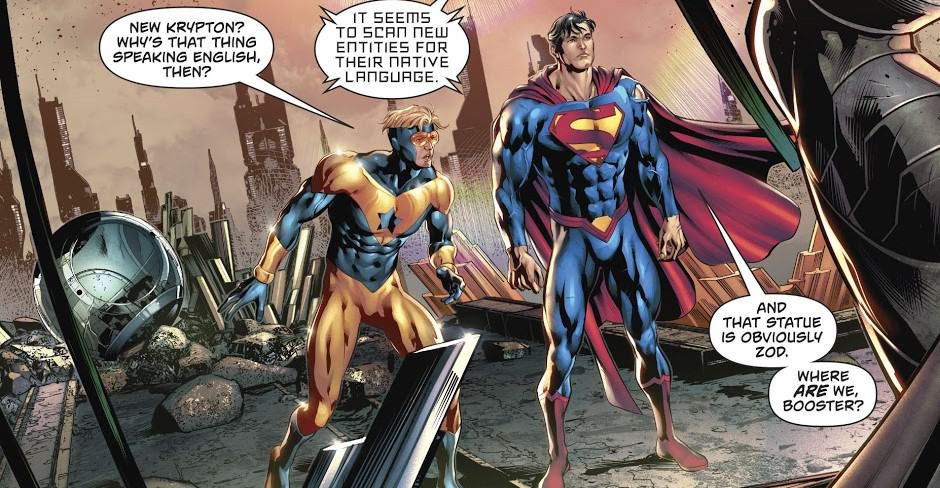 This catches the attention of a passing Eradicator and Big Blue loses his temper and destroys it, Skeets finally manages to nail down their place and approximate time, Jekuul several decades in the future, the planet revealed as New Krypton in this weeks Hal Jordan and the Green Lantern Corps, which loosely ties into this issue despite not being advertised in any way.

After the laughably brief battle (Superman seriously tears the Eradicator a new one) Skeets reveals that the time ship is damaged and requires new parts to travel, they’ll have to travel into the settlement and find some raw materials to jimmy rig or something. 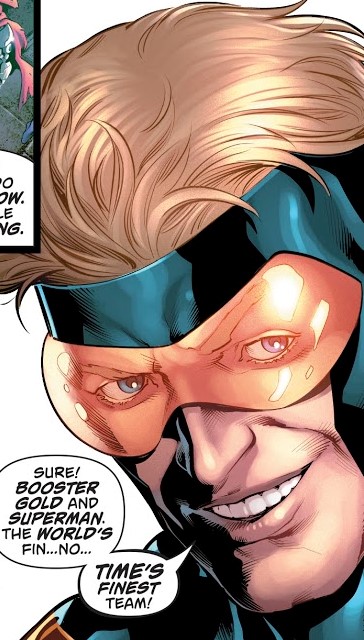 I’m gonna leave the rest of the issue for you fine folks to discover, trust me it’s gonna be worth it this arc is top notch! Pick up a copy of this book at your local comic book store today! The end is killer! (although they spoiled the twist on the cover)

Anyone who reads my reviews regularly (someone has to exist somewhere I assume) knows I’m loving this arc, and have consistently held it in high regard, this issue is no exception. I am loving the exposition of Booster Gold’s character (seriously someone get this guy a solo series! His creator is writing the friggin book and one of his greatest recent contributors is the boss of the company!) by Dan Jurgens, and many of his interactions with Superman have been really interesting and fun, I love that at the start of the arc Supes didn’t care for him much and now he seems to be coming around, that’s called character development.

I do wish they had in some way given a heads up that this book kind of ties in with Green Lantern, luckily I read Hal first (sorry Dan-o) so it was fine, but I bet some people read this one first and missed out on that sweet sweet prelude action!

I do find it kind of interesting that apparently this means that the Zod family isn’t ousted from Jekuul, and means the dwellers on the planet exist in servitude for 30 years or so (oooh wouldn’t it be cool if this arc ended before the Hal arc and Superman, knowing what he knows, he flies to Jekuul and provides backup, oh crap I just outlined an arc! Robert Venditti take note!)

Holy crap Will Conrad is good! The art in this book is the best I’ve seen since the Guy vs Arkillo fight in Hal and the Corps 15-16 by the hard to top Rafa Sandoval. (who is drawing this issues counterpart, also out this week) The art is detailed and incredible, I can’t believe how good it looks, the shots of Superman attacking the Eradicator android are amazing! I also want to take a moment to mention the killer variant cover by Dustin Nguyen, who has been doing the B covers last few issues and they have all been so great I actually switched my Action subscription over to them. (I don’t usually do variant covers really)

This arc is seriously can’t miss, and ties into one of my favorite Rebirth series, so naturally this issue is an instant favorite. I can’t get enough of Jurgens on Superman and his creation Booster Gold! He has such a firm grasp on the characters and it really shows in the story, even Skeets is fleshed out a bit at points. I can’t wait for next issue.