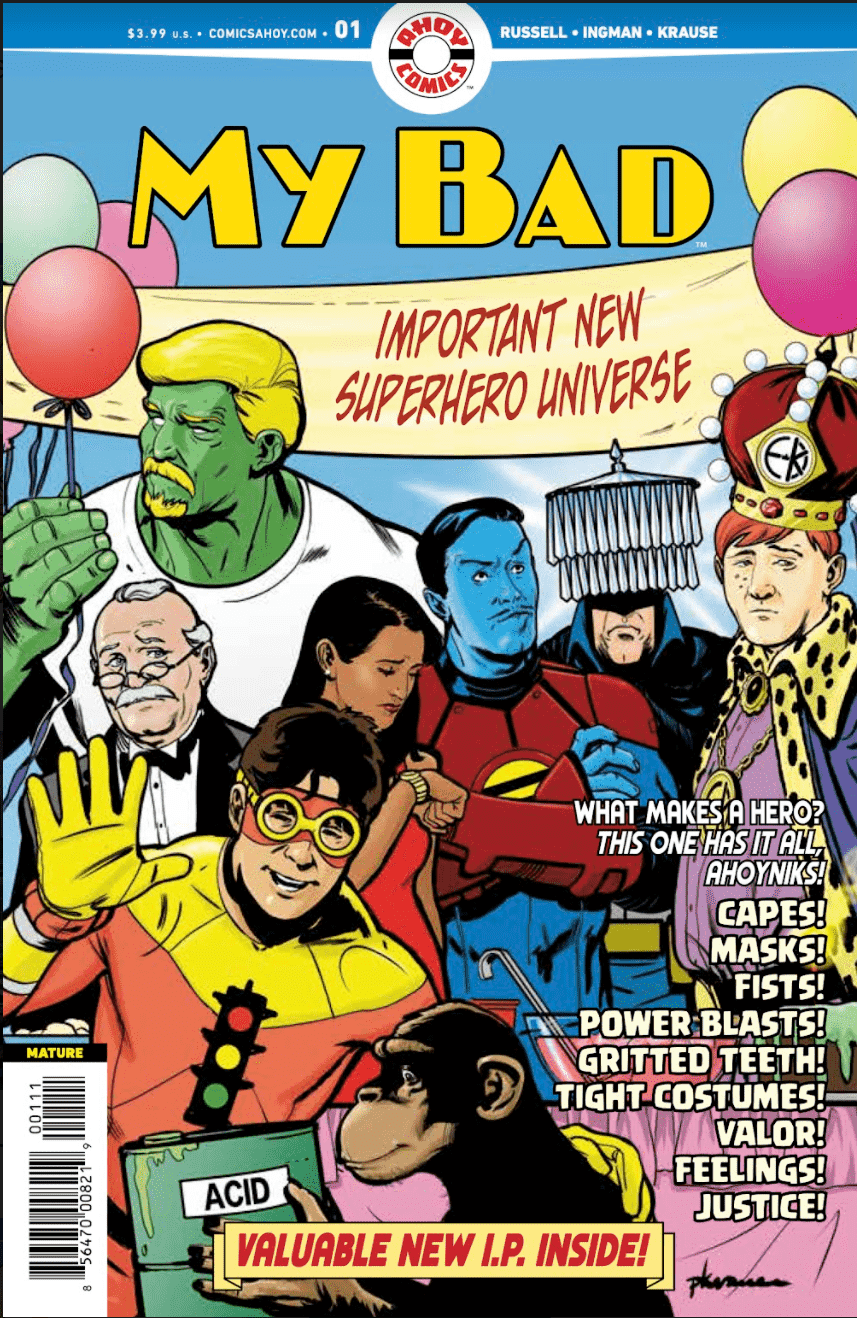 It’s fair to say, at this point, that Mark Russell is his generation’s master satirist. Never content to simply take the low-hanging fruit, Russell is a genius at ruthlessly exploiting the flaws in a given system in such a way that strikes immediately where the fire is hot without being overly preachy. Billionaire Island, Not All Robots, The Flintstones, and his masterpiece Second Coming (plus its sequel) are all genuinely exciting reads that are equal parts hilarity, incisive commentary, and meditation. Never content to merely point out what’s wrong with a given subject matter, Russell also provides well thought-out points to consideration for why, for example, a billionaire class is not a good idea in a functional democracy.

All of which brings us to Russell’s latest, My Bad.

The premise is rock-solid: take the inflated hype behind IP-generating comics creations and skewer it mercilessly by revealing that there must be more than surface-level conceits. There’s been a veritable land rush in the industry over the past decade or so to attempt to create The Next Big Thing in Hollywood without much afterthought to actually crafting a story of substance. Some of these projects have even attracted actual bonafide Hollywood star power to them, to predictably mixed results. Some newer publishers seem to be only interested in being I.P. generators. There haven’t been too many net positives from this approach, and the saturation of quantity over quality risks creating a bubble that will, inevitably, burst at some point. And so, into this quagmire, comes My Bad.

My Bad is staged like an anthology, with different vignettes giving us insight into the various heroes and their personas. All of them are completely ridiculous in their own ways… 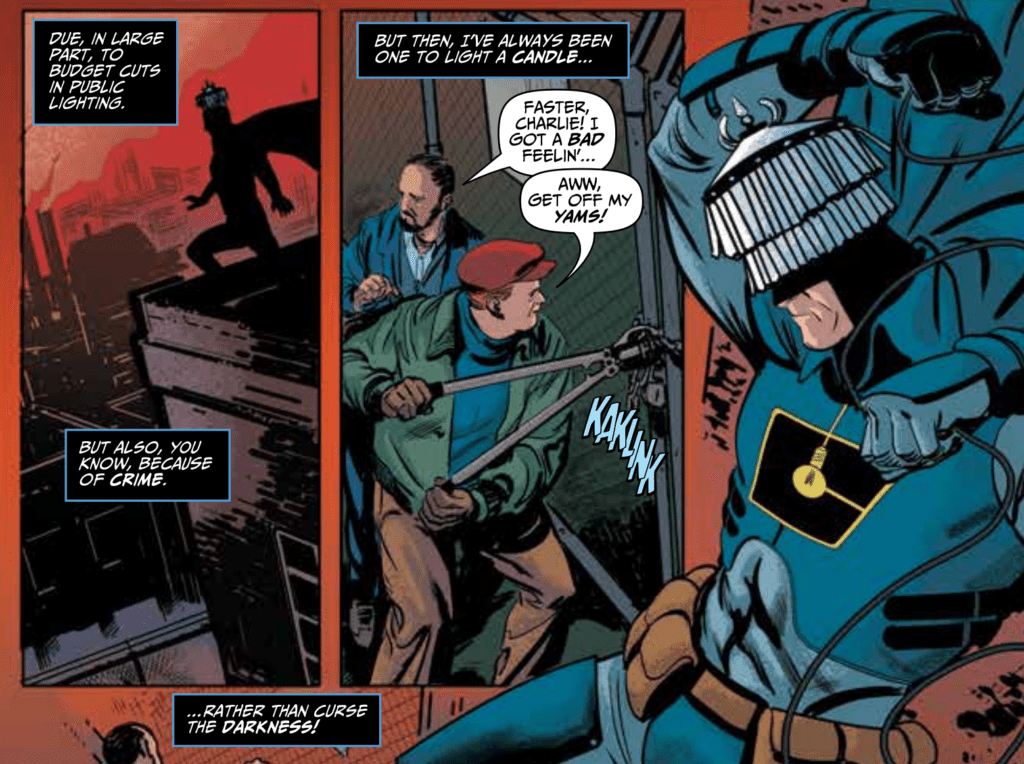 …and all of them take themselves far, far too seriously. There’s the Chandelier, Rush Hour, the Accelerator, Manchild, and the archenemy, Emperor King – all of whom are products of a system that has read far, far too many comics and only views superheroes for their surface-level worth rather than taking the time to build them up as people. And lo and behold, that means the people beneath the masks are kind of crappy.

Russell isn’t the first to take this approach to parodying superheroes. Not by a long shot. But he is the first to apply it as commentary on comics’ current hyper-fixation on I.P. generation. And in that way he’s yet again using his incisive sense of parody to point out uncomfortable truths about his given topic. Comics at large may not want to hear it, but they certainly need to. Readers, too, could perhaps use a bit of a wake-up call when it comes to being more discriminating when it comes to identifying comics that aren’t developed with an eye for creativity but rather capitalism at their core.

Russell isn’t alone in this venture, though. Along for the ride are regular Ahoy contributor Bryce Ingman (who has his own pretty cool IMDb page, check it out here for his resume) and artist Peter Krause, best known for his collaboration with Mark Waid on Irredeemable. The three of them form a pretty gnarly triple-threat of wit: check out the mock letters page (which lovingly skewers the old letters page trick of not actually answering any questions asked), or the loving homage to those old-school Hostess Pie ads. Even publisher Tom Peyer gets in on the act, giving his own spin on a Stan’s Soapbox column with a level of love and affection that only someone with a huge amount of heart and understanding could bring.

The whole My Bad package is slick, and worth your time. My only real complaint is that it might be a little too smart for the people who need to read it the most to fully grasp. But isn’t that usually the way?

My Bad #1 is incisive, witty, and exactly what the I.P.-crazed comics industry needs to read the most right now.