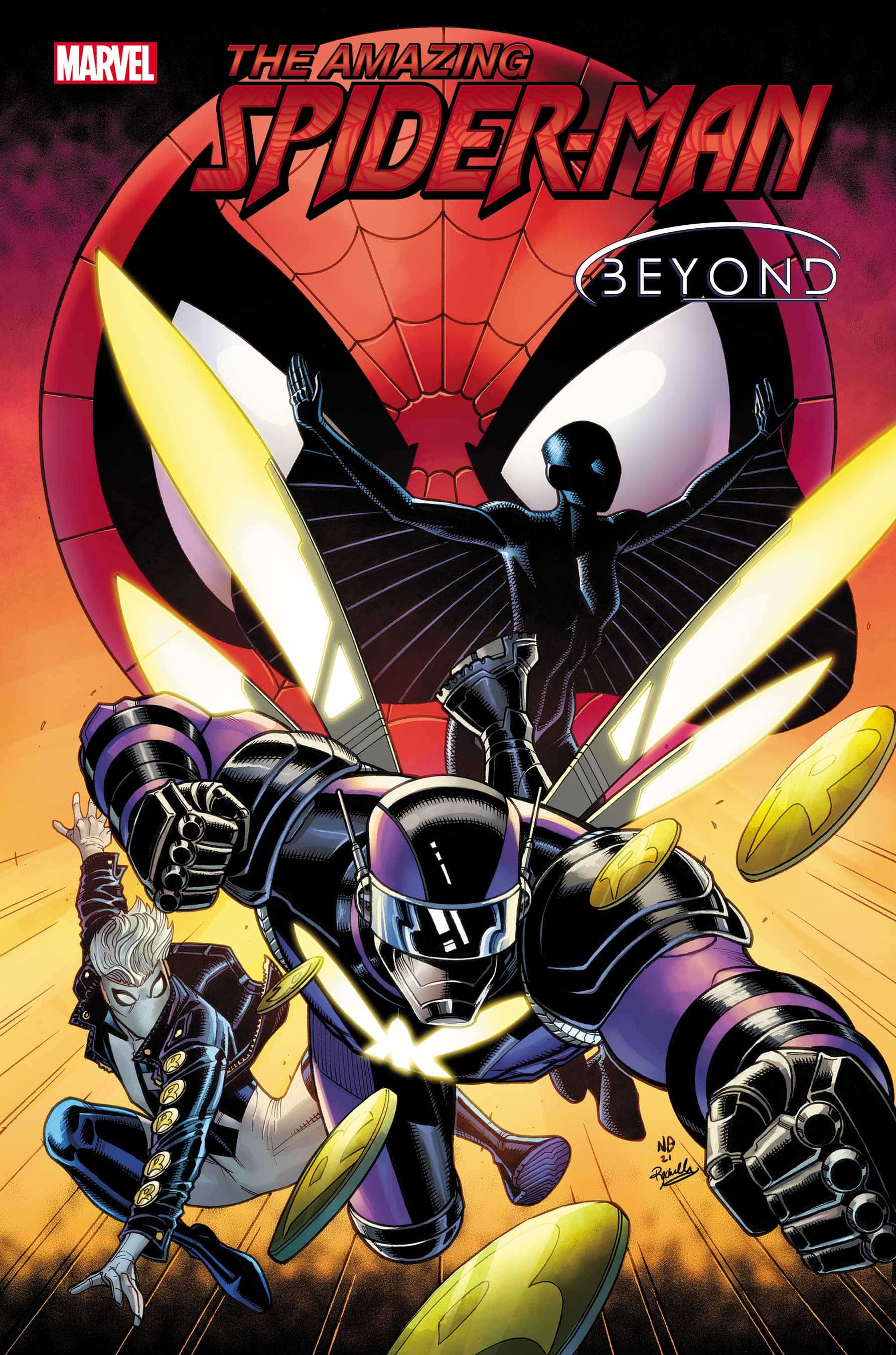 What on earth does Hobie Brown, a.k.a. the Prowler, a.k.a. Hornet, have to do with the Beyond Corporation...? And how does this mystery connection lead to the return of a cult-favorite Marvel team?!

Apropos of nothing, Marvel heralds the return of the Slingers in the pages of Amazing Spider-Man #88.BEY, the latest “Beyond” tie-in. Who are the Slingers, you may ask? Well… 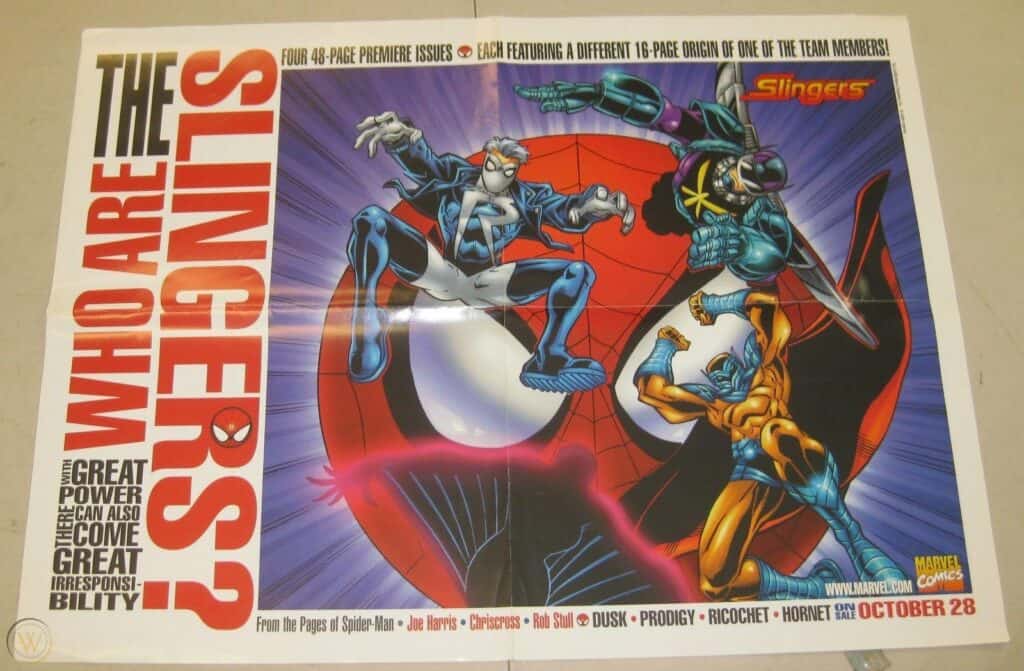 …by the late ’90s, the much-maligned Clone Saga may have come to an end, but Marvel was still having trouble jump-starting interest in Spider-Man. Fans had soured on ol’ Web-head after three long, painful years of clone-centric shenanigans; subsequent attempts to return Spidey to his roots had been met with a collective shrug at best. Something had to be done, so naturally, someone came up with a pretty gimmicky – yet inherently fun – idea: have Spidey don not one, not two, not even three, but four separate alternate identities while Spider-Man was wanted for murder (er, again). The idea was that each of his new identities would lean into a particular aspect of Peter Parker’s character/personality, so Ricochet leaned into his acrobatics, Hornet was a insect-guy, Dusk was Peter’s crawling-out-of-the-shadowsness, and Prodigy invoked his scientific prowess. 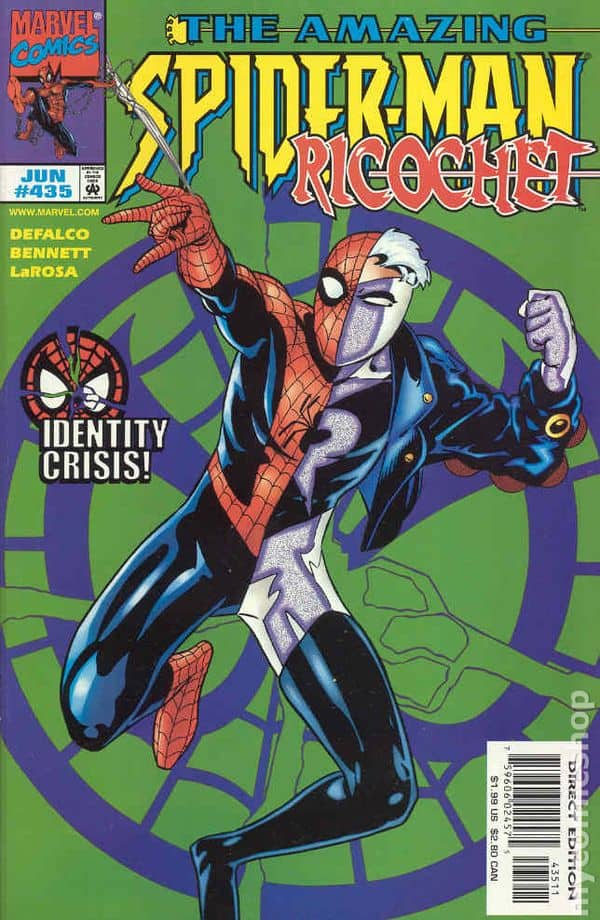 Of course, it didn’t last, nor was it meant to. The burden of keeping up with four separate identities proved too much for Peter, and of course he eventually was able to clear his name of the crime in question and go back to be his usual-level-mistrusted Spidey-self. But Marvel, never one to keep an idea down, decided the “Identity Crisis” characters should live on, with new faces behind the masks: 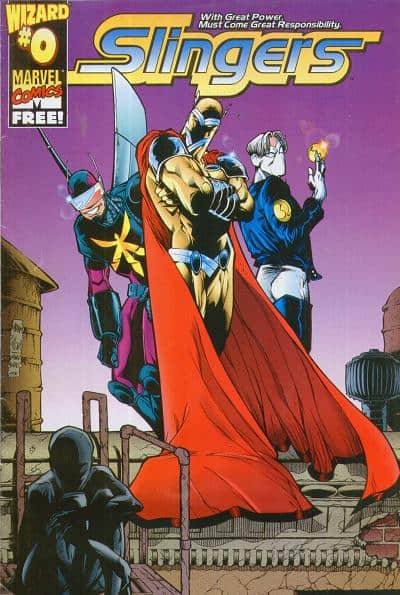 And so was born Slingers‘ second act. The original gimmick lived on with a gimmick of its own: four different versions of the first issue were produced, each telling roughly the same story but from the perspective of a different team member. That’s a move that was either boneheaded or extremely overconfident or perhaps both; either way, the Slingers failed to catch the world afire and the series was cancelled with issue twelve. The characters faded away, with token appearances here and there, but nothing more. The Slingers, it seemed, were destined for the quarter bins of obscurity.

But now – now, Marvel is perhaps feeling a little emboldened by Gen Z nostalgia, and is feeling bold enough to revisit some lost concepts from the ’90s. And why not? There’s no reason ’90s readers youthful interests are any more or less valid than older readers’. Why not tap into it, and give the Slingers a new potential lease on life? Seems pretty clear, right?

What’s less clear is how they fit into the larger “Beyond” story… at least so far. The previous .BEY issues have had pretty well-defined reasons for being included into the story (less clear: why not just make them regular issues of Amazing?), but having the Beyond Corporation figuring prominently into this story, there’s no real reason for anything that’s happening here to, well, be happening. Is it nice to see the old Slingers in action? Sure. Is it nice to catch up with Hobie Brown, even if he’s more or less unrecognizable from previous incarnations? You bet. But… did this story need to happen? That’s less clear.

The overall story execution from Geoffrey Thorne doesn’t exactly inspire a ton of confidence in that regard, either. There are shenanigans afoot, sure, but they aren’t resolved in any meaningful way, and the narrative arc of the story feels extremely incomplete. It ends in a cliffhanger, which is fine, but because everything feels rushed and extremely coincidental to the point of being forced, the plot doesn’t exactly feel like it has very high stakes. The central conceit of Hobie Brown having his own crowdfunding company is utterly underdeveloped; what does that mean? Are they some sort of GoFundMe or KickStarter? Thorne isn’t really interested in answering those questions, and if they were established in previous stories, at no point does he give any indication as such. The entire concept is a leap of faith as it’s presented, which as an empiricist is extremely hard to buy into.

The art by Jan Bazaldua and Jim Towe is serviceable, but has a kind of workmanlike “filler issue” vibe to it that never really allows it to get off the ground. Everyone involved on the art side, including colorist Jim Campbell and letterer Joe Caramagna, did their homework and turned it in on time and earned a solid B, but nothing about it really screams extra effort. Bazaldua is a really underappreciated artist (check out The Last Annihilation: Wiccan and Hulkling if you don’t believe me), but something – perhaps the off-kilter material she had to work with – left an uninspired impression on me.

All things told, this could have been another fascinating side quest in the overall “Beyond” saga. As it is, though, readers are going to be left scratching their heads and asking themselves “Why?” Why the Prowler, now? Why the return of the Slingers, now? What does any of this have to do with “Beyond”? Maybe future issues will answer these questions, but based on this initial outing, I’m not sure I actually care.

Amazing Spider-Man #88.BEY is a weird detour in the "Beyond" saga that adds many extraneous elements but precious little that actually feels consequential to the overarching story. Skip this one unless you're a completist or an old-school Slingers fan.