ADVANCED REVIEW! Avengers #50: The Best of All Worlds 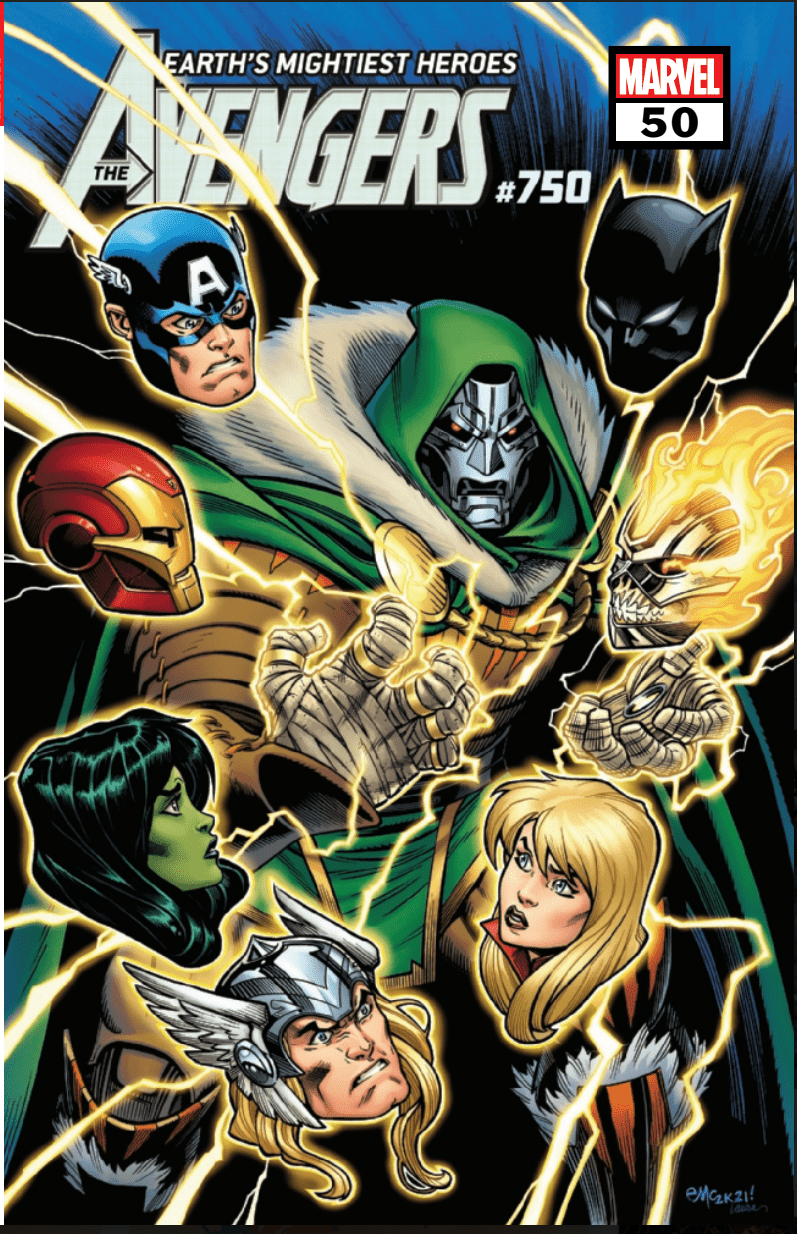 Jason Aaron's overarching Avengers epic reaches a HUGE milestone with its fiftieth issue! Everything (so far) has been leading to this!

Absolutely nobody can accuse Jason Aaron of not swinging for the fences.

The writer has, in the course of his decade-plus Marvel career, made a name for himself by finding the biggest possible, most bonkers story beats he can find and run absolutely wild with them. It mostly works: epic seven-year runs on Thor begat definitive takes on the character for a new generation (or, on a smaller scale, a mythos expansion for Ghost Rider) has cemented Aaron’s stature among Marvel’s finest writers for the 21st century. However, going big can cut both ways: bigger is not always better, and some times ideas can fall short. His Avengers run has been something of a mixed bag in this regard from the start; always writing in full-on event comic mode, Aaron’s take on Earth’s Mightiest has sometimes felt like a case of too much going on and too little time to slow down and just breathe and indulge in some much-needed character beats. Still and all, the man has a plan, and even with a few missteps, the shape of that plan is at last bearing fruit with Avengers #50 (LGY #750, for those keeping score at home).

Aaron has had several long-running subplots throughout the first fifty issues of his Avengers opus that are finally merging together: namely, the Avengers Two Million BCE, Mephisto’s long-game assault on Earth’s Mightiest Heroes; She-Hulk’s present state of mega-Hulkiness; the international intrigue of the Winter Guard and their Red Widow; Namor’s unusually high surliness (even for him). It’s taken fifty issues, but all of these subplots are at last dovetailing in an organic way that proves that yes, this writer is a master of his craft and has absolutely known what he’s been doing this entire time. Haters be damned.

As for what’s next, well… it would be uncharacteristic if it weren’t big. Solicits have already spoiled the next arc, but really, words alone don’t do it justice. Aaron sets the stage in this issue for what’s to come in a way that hits all the right buttons, deliberately setting up the threat as one that the Avengers – for all their strength – don’t have a hope in Hell at defeating. At least not through strength alone. It’s going to be raucous, to say the least. It’s going to make the time Thor got turned into a Brood look like chump change by comparison.

Looking at Avengers #50 on the whole, the page count clocks in at 100 – but there’s only one backup story here. No filler, all killer. Aaron assembled a team of knockout artists (McGuinness, Garron, Kuder, and Pacheco) to knock out a feature-length story, one that’s so big, it takes nearly the entire oversized issue to tell. That’s impressive. Fans have been pretty well conditioned at this point that oversized issues = no less than four backup stories that tend toward well-meaning-yet-utterly-forgettable short stories at best and filler pap at worst. That’s not the case here. I sure hope Marvel gave Jason Aaron and his legion of artists a nice little extra something-something in their paychecks for this one, because it couldn’t have come easily.

And what jaw-dropping moments Kuder, McGuinness, Garron, and Pacheco get to draw! Galactus, Ka-Zar, Gorilla Man, a devastated Atlantis, a new foe called the Iron Inquisitor, She-Hulk She-Hulk SHE-HULK, Celestials, the doom of the multiverse, and SO MUCH MORE. Not a lot of artists could pull off the wonderfully over-the-top, bonkers story beats Aaron asks for. But these artists bring the goods on every page. Even more remarkably, there isn’t any notable troubles with artist transitions, something that can be bane if artists are stylistically mismatched. Not so here. Every artist brings not only their A-game, but also a strong sense of widescreen wonder to every panel. The colors across the board pop, too, really jumping off the page in a way that feels perfectly at home in this comic.

All in all – this comic is absolutely electrifying, thrilling, and exactly what it needed to be to properly convey the scope of not just an anniversary issue, but an Avengers anniversary issue.

Avengers #50 knocks it out of the park on all levels. Don't let the price tag scare you away - this is rip-roaring superheroics at their very best.

ADVANCED REVIEW! Avengers #50: The Best of All Worlds