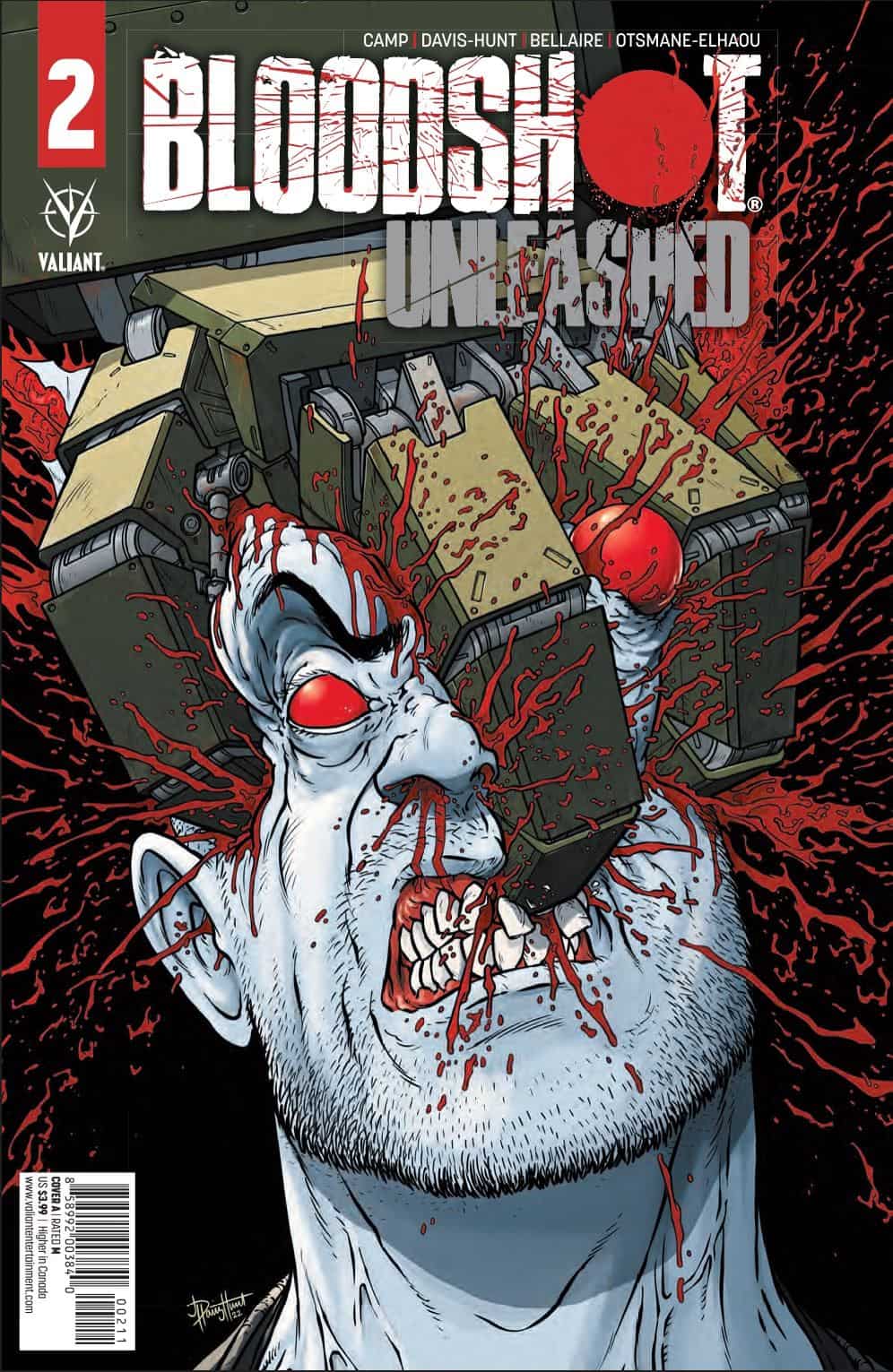 Bloodshot has a new mission... to rein in the rogue supersoldiers running amok across the country. But of course - nothing is ever simple, and since Bloodshot is overmatched at every turn, it's going to take every ounce of skill, wit, and luck he can muster to keep from getting killed a hundred times over! 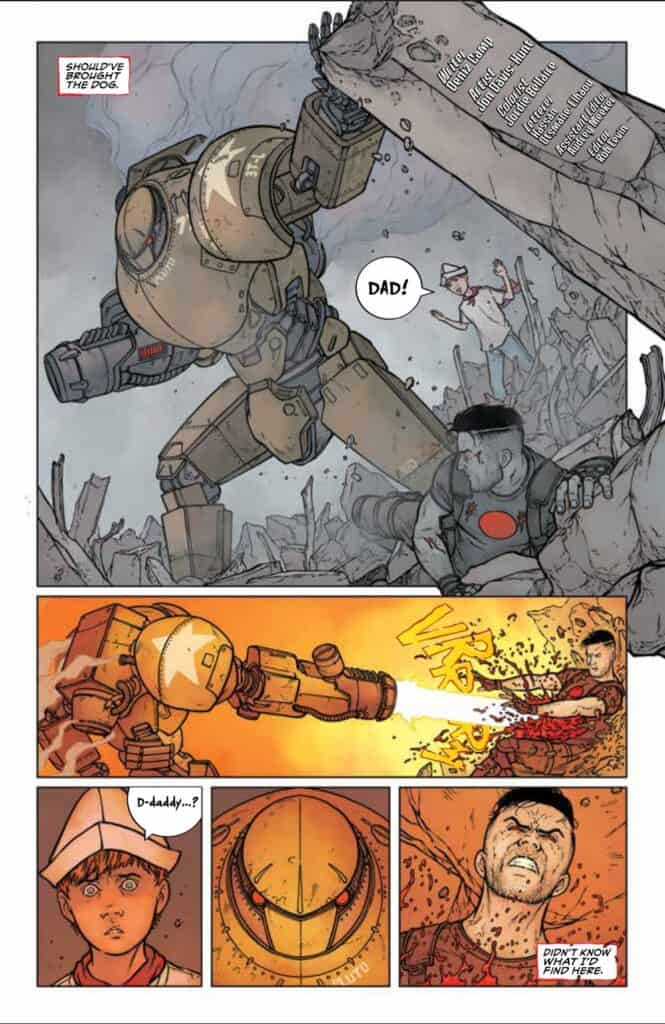 With Valiant’s publishing schedule trimmed to just one comic per month due to events transpiring behind the curtain, they’re in the unenviable position of having to have that one comic absolutely slap when it arrives. There can’t be any “meh” or just okay comics. There’s too much on the line for them to not deliver comics that prove the case for their continued existence.

Fortunately, Bloodshot Unleashed is one hell of a case for the defense.

Issue one wasted absolutely no time reeling readers right on in, and now issue two continues that trend. Jon Davis-Hunt’s wonderfully detailed, graphic, hyper-kinetic art is a perfect match for Deniz Camp’s laser-focused story. This issue, Bloodshot is tracking down a radioactive rogue whose mere presence is causing an entire nearby town to sicken and die off due to radioactive yield. Think Chernobyl, but on legs and built like a literal tank. Physical force alone isn’t going to win the day, especially when Bloodshot is getting torn to shreds with especial ease.

The action beats carry the story well, but there’s a new element in this issue: a young boy whom only Bloodshot can see, who thinks they’re father and son. They aren’t – but the real truth is deeply unsettling, and adds a new layer of nuance to Unleashed‘s narrative, that this old soldier not only never dies, but isn’t allowed to. In a sense, Camp’s story is about PTSD – never being able to escape it or run from it; only by confronting it head-on will Bloodshot be able to move forward. That’s a pretty daring choice, but in Bloodshot Unleashed, that PTSD is made manifest in the most brutal ways possible.

Which brings me back to Jon Davis-Hunt, one of the industry’s great modern unsung heroes. Breaking big in DC’s The Wild Storm, Davis-Hunt has grown into a powerhouse artist in a surprisingly short amount of time. Although their overall styles couldn’t be more different, Davis-Hunt comes from the Geoff Darrow school of art – disarmingly minimalist for the figures set against a highly-detailed backdrop that rewards readers who take the time to really pore over each panel. And in Bloodshot’s ultra-violent world, that attention to detail makes a world of difference: we feel each blow, cut, gash, bullet wound, disembowelment, dismembering, and broken bone right there alongside our protagonist. Due to the extremely hard-R levels of violence and gore (I mean jeez, there’s an eyeball popping out right there on the cover), this won’t be a comic for those with queasier tastes, but boy oh boy does it look fantastic for those who don’t.

I’d be remiss of I didn’t mention workhouse Jordie Bellaire, about whom nothing new can be said regarding her shockingly brilliant colors. For the past ten or so years, she’s been not just redefining but out-and-out owning the game – taking the often thankless task of coloring and reminding readers on a regular basis why a good colorist makes a world of difference in a comic. For Bloodshot Unleashed, she’s sticking to a more muted pallet – lots of whites, blacks, and gunmetal greys – but with a striking amount of claret for the buckets of blood seeping down nearly every page. Thanks to this technique, the pain and violence experienced feels that much more impactful.

Rounding out the creative team is Hassan Otsmane-Elhaou, who like Bellaire, is redefining his respective craft. Otsmane-Elhaou continues to find new and inventive ways to incorporate the letters into the art canvas of each page. There’s a particularly striking pair of pages this issue that are intended to represent jumbled memories, so he deliberately offsets the balloons in each panel so that they’re running “offscreen” and can’t be completely read. It’s a brilliant idea that really enhances the scene in a way that couldn’t be accomplished in any other medium. Here’s to the power of comics, kids.

The one frustrating thing about Bloodshot Unleashed #2 is that it’s over so quickly, and the antagonist isn’t fleshed out at all. We don’t know what his motives are, really, he’s more of an obstacle to be overcome and not much else. I’m not sure if that was a deliberate choice on Camp’s part, but all things being equal, it’s harder to invest in a story if the antagonist is just there to punch and be punched (ahem, lookin’ at you, Black Adam). But with only four issues to work with, Camp has his work cut out for him, and he’s handling it like a champ so far. But with only two more issues to go in this miniseries, it doesn’t feel like there’s going to be much in the way of a wrapped up story by the time issue four drops in December. Prior to Valiant’s current financial concerns, this series was supposed to have gone for eight issues. I certainly hope we get the other half of the story at some point, because it’s just too good to lie incomplete. Don’t sleep on this one – Bloodshot Unleashed proves for all that there’s still life in Valiant yet. The pulse may be faint, but the signs that they’re fighting to live are evident throughout this superb issue.

Bloodshot Unleashed #2 is one hell of a bullet- and blood-soaked ride, a near-perfect comic that fires on all cylinders until the final page brings an almost wistful conclusion. Don't miss out on this one!