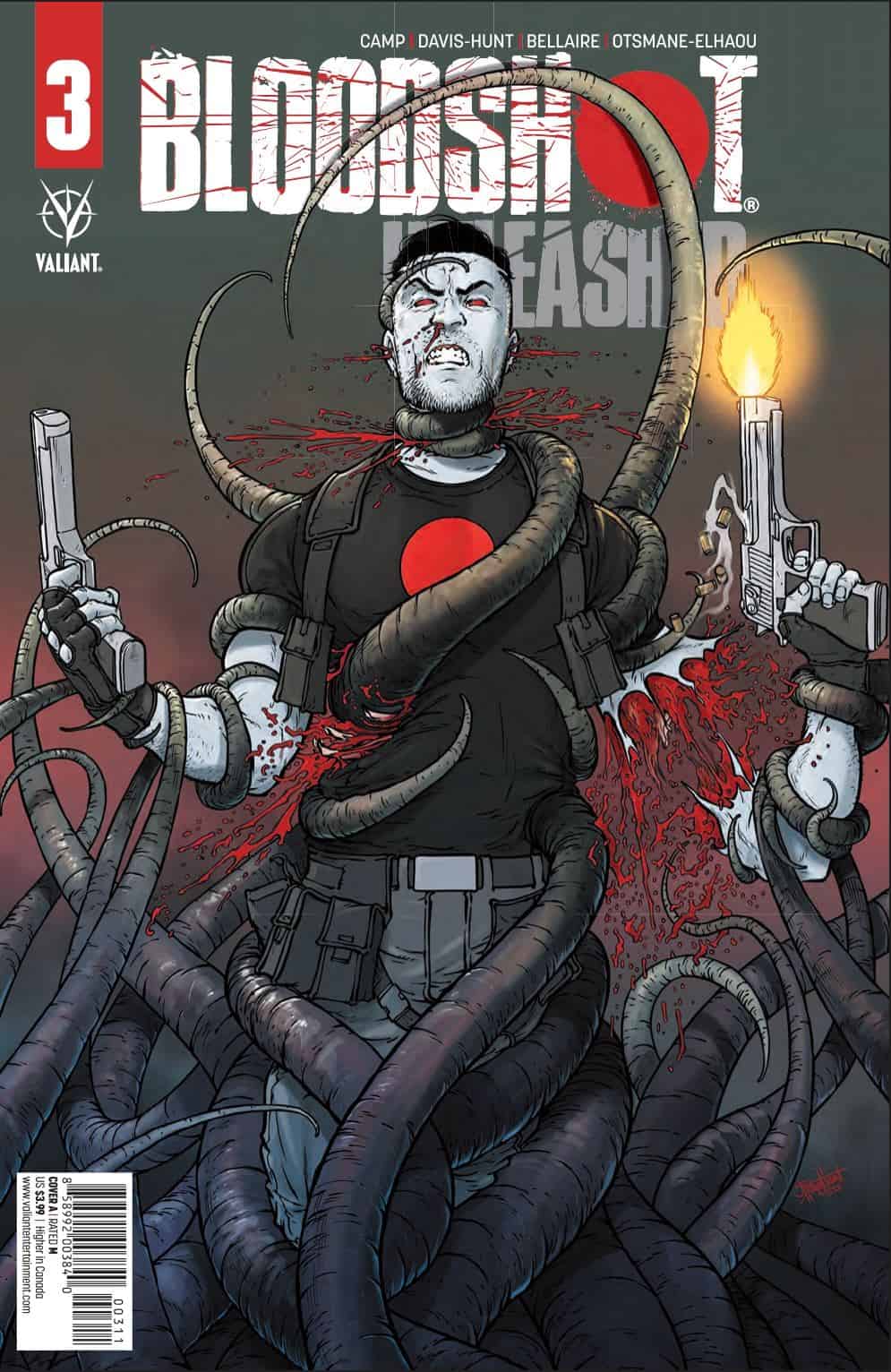 Project Rising Spirit took an ordinary solider and replaced his blood with strength-enhancing nanites and healing capabilities to create the ultimate soldier, BLOODSHOT! Now, with other similar experimental warriors on the loose and ravaging small-town America, Bloodshot's current mission has him tracking down and eliminating threats eerily similar to himself. This mission has lead him to an unincorporated territory somewhere in America where he finds his mission intersecting that of another agent - X-O MANOWAR!

At what point does religion become delusion? When does faith become dangerous? Why do some of the pious remain faithful and good, while others turn to violence? These are some of the thorny questions writer Deniz Camp poses in another gore-drenched issue of Bloodshot Unleashed, A.K.A. the best comic you’re not reading.

While Bloodshot criss-crosses the country hunting down super-soldier rogues, he stumbles onto an alien infestation in a small, unincorporated town desperate for something to cling to after a mining cave-in shuttered its only real source of employment. The nature of the infestation brings in Bloodshot’s old pal X-O Manowar, a fellow soldier who operates on a whole different level. Whereas Bloodshot focuses on relatively small-scale menaces, X-O thinks on a planetary scale, and isn’t afraid to casually weigh the greater good of annihilating whole worlds for the safety of the many.

Taking the above two paragraphs into account, there’s a lot to consider in this issue. But this is no dry Philosophy 101 course: action lovers, fret not, because there’s a ton of action, blood, gore, brutality, and more gore to get you through. This is, after all, a Bloodshot comic, and Camp knows it – as does the unstoppable artistic duo of Jon Davis-Hunt and Jordie Bellaire, who have the balancing act of going absolutely hog wild with the Texas Chainsaw Massacre of it all and depicting quieter, more nuanced scenes. All things considered, it’s a tough balancing act to pull off, but these two consummate pros make it look easy.

Tying into the meatier religious questions posed by this issue, letterer Hassan Otsmane-Elhaou gets to pull of more revolutionary feats in defining what a letterer is for the new generation. There’s several scenes wherein a character is quoting Biblical scripture, and rather than have the quote as part of the standard word balloon, it takes the form of a torn piece of paper superimposed over part of said balloon. The effect is indelible, effortlessly communicating the intent of the scene in a way that “regular” lettering couldn’t quite match. Otsmane-Elhaou isn’t a legend in the making; he’s one right now.

As for the rest, while the stand-alone narrative structure of each issue of Bloodshot Unleashed serves its own purpose and works in its own way, it also means each issue feels a bit disconnected from the previous one. Particularly in issue three, which begins in medias res, feels a bit like there’s a scene missing between it and the previous issue. Gone is the little boy that Bloodshot had been hallucinating, for instance. There’s also no indication given as to how Bloodshot knows where to go to find his next target; the last issue obliquely mentioned something along the lines of, “the nanites tell me where to go,” which is a convenient hand-waving away of crucial details but – given that this series is only getting one more issue (hopefully just for now; I really want to see it conclude) – it gets a pass given the needed economy of storytelling scale. If Bloodshot Unleashed were getting more space to breathe, perhaps Camp would work these little details out. But que sera sera.

Lastly, as for this issue’s guest-star, X-O: boy, this guy doesn’t do himself any favors in winning me over to wanting to root for him. That’s part of Camp’s deliberate attempt to play his and Bloodshot’s micro/macro perspectives against one another, but his cold, distant and alien demeanor here makes him a hard character to warm up to. Perhaps if a given reader had previous experience with the character, he would make a little more sense. But without, I’m left feeling like he’s a cold fish. That’s definitely Camp’s intent, though, so I can’t necessarily complain. More of an observation than anything else.

Bloodshot Unleashed #3 continues this title's winning streak, and although its run is truncated - at least for the time being - it is absolutely worth your time to pick up. This isn't just a standard shoot-'em-up action comic; there's care and thought put into its craft from the entire creative team that makes me want to check out not only previous Bloodshot tales, but other works from the creators, too.