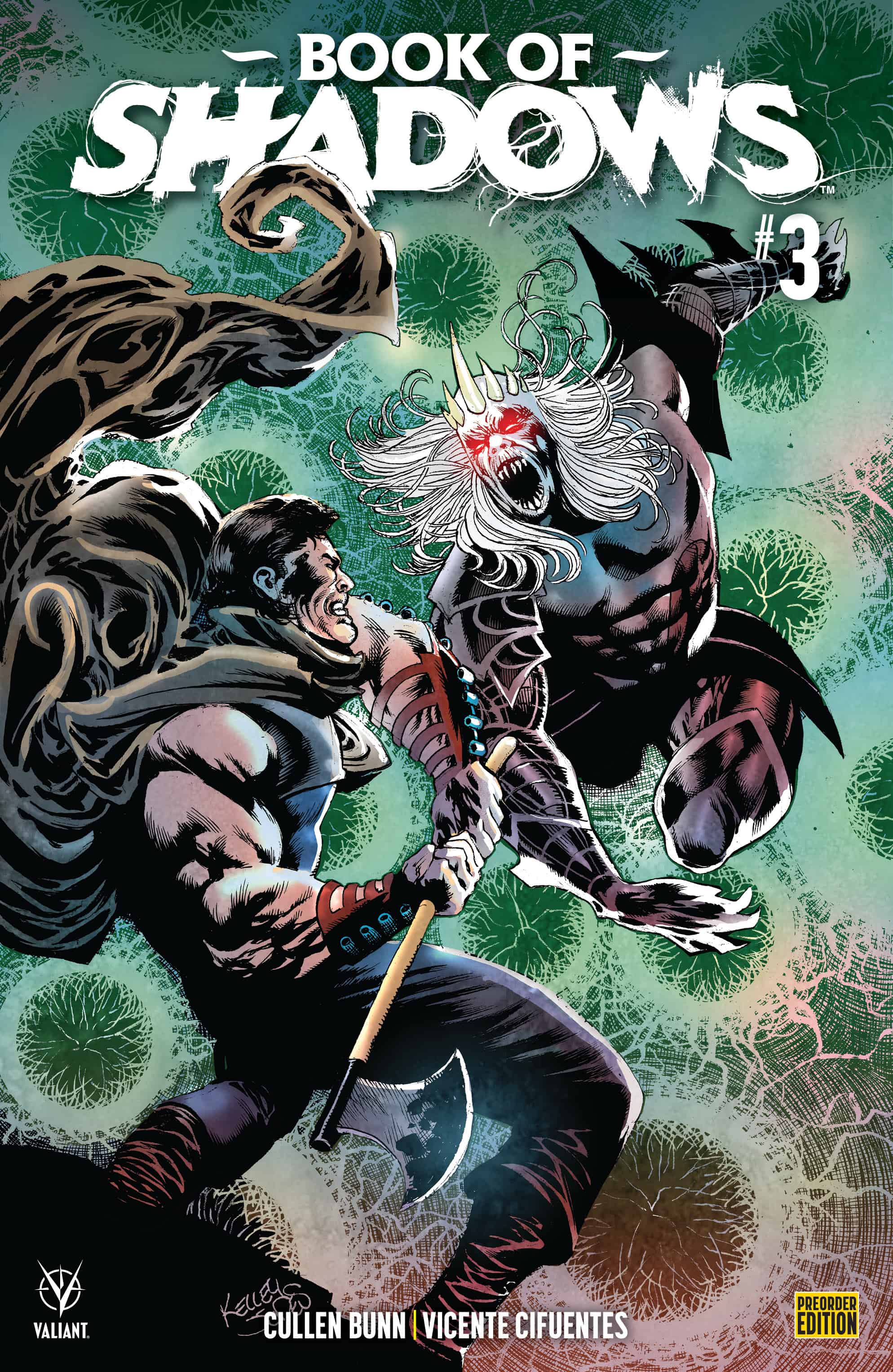 Malevolent sorcerer Exarch Fane has weaponized the mythical BOOK OF SHADOWS - and is intent on using its dark power for some as-yet unknown evil scheme that will annihilate the world (and probably a lot more). But the Book isn't just a book - it's alive, and possesses its own will and plots! Fortunately, Shadowman, Persephone, Punk Mambo, the Eternal Warrior, and Doctor Mirage stand in his way... too bad they've been massively overpowered from the start of the fight...

You can read our Book of Shadows #1 review here, and issue #2 here.

Book of Shadows #3 is one cool little book.

It doesn’t do anything revolutionary, nor does it rewrite the rules of genre storytelling. But what it does do is put an authentic horror spin on the idea of the superhero team-up, and do it well. And if you’re going to go for the gusto with horror, who better to turn to than Cullen Bunn, who routinely cranks out horror comic after horror comic on a regular basis (and sometimes more than once a month. The man’s a walking, talking, unending treasure chest of all things macabre, and although Vicente Cifuentes’ slick pencils (more on those later) may not quite lend themselves to the tone Bunn is invoking, the story clicks.

Of course, that’s a lot of double-edged praise. Book of Shadows sticks to the basics, and although it does those basics well, it isn’t a particularly deep story. Main bad guy Exarch Fane shows up with a magical Maguffin (the eponymous book) and a plan to use it to do… something. With his minions, he’s racking up quite a body count, and has to be stopped.  That’s the plot; we don’t know a thing about Fane, what his motives are, nothing. He’s there because the plot requires an antagonist and a reason for the assorted heroes to form an alliance, and that’s about it.

But, Exarch Fane is beside the point, really. The fun in Book of Shadows has been watching Shadowman, Eternal Warrior, Punk Mambo, Doctor Mirage, and new kid on the block Persephone team up and hang out and wallop some bad guys. The various leads’ personalities bounce off one another nicely; Shadowman and Punk Mambo, especially, have a good odd couple energy that would be fun to explore in future stories.

One thing Book of Shadows isn’t, though, is new reader-friendly. There’s a lot of background on these characters, who they are, what their backstories are, where they come from, that just isn’t here. Readers be forewarned – don’t expect a ton of exposition to catch you up. That said, though, Bunn is a talented enough writer that he makes them all feel familiar even without any of the standard comics-exposition tropes.

Vicente Cifuentes’ art, evocative in places of a Bryan Hitch with a lighter line or Aaron Kuder, is a wonderful penciller for this story, but perhaps not the right one for Bunn’s intended tone. Book of Shadows is a dark, grungy book that could really have benefitted from someone whose style plays better in those particular gutters. Again – that’s not to knock Cifuentes’ art at all. But sometimes the call of the story is beyond an artist’s skillset, and that is the case here. Nick Filardi’s bright, eye-popping colors have the same feel – damn good, but not quite right for the tale Bunn is telling.

It must be said, too, that there’s an unavoidable feeling that despite this being a solidly-executed comic by the entire creative team, and a fun story, the stakes don’t feel like they’re there like Bunn wants us to believe. Part of that is due to the above concerns, but part too is the five-month gap between issues two and three. That’s unavoidable and not the fault of any of the creators involved, but it’s there nonetheless. Hopefully, the book closes strongly, and leads to bigger things. Given Valiant’s recent success with Bloodshot Unleashed and the jaw-droppingly beautiful upcoming X-O Manowar series, they clearly have a lot of killer comics left to offer. Book of Shadows may indeed be a bridge between past aspirations and future endeavors, and if that’s the case, well, there are much worse fates.

Book of Shadows #3 doesn't reinvent the wheel, but it is a fun comic. It portends a strong future for the Valiant-verse, acting as a bridge between the past and the future.