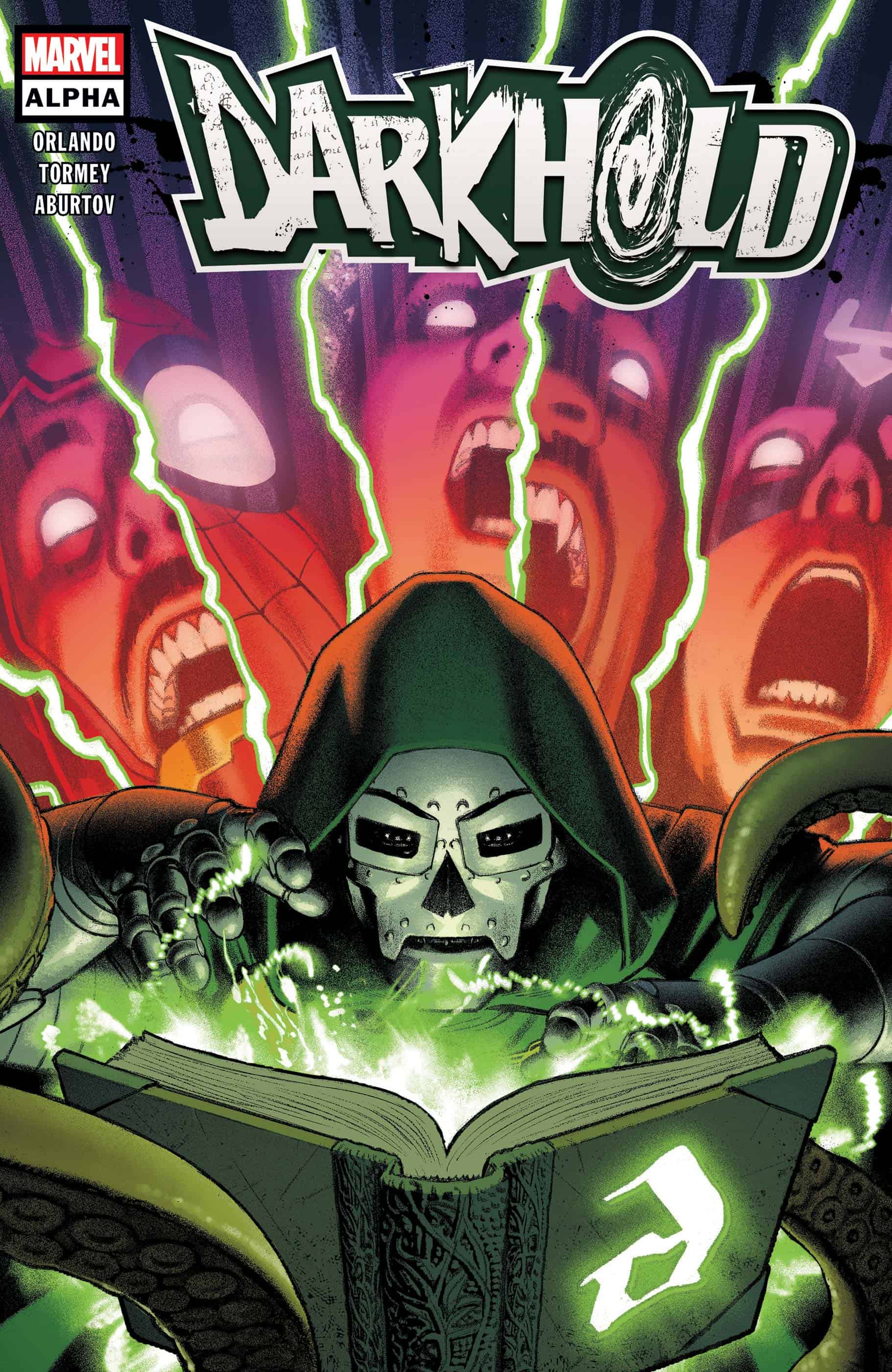 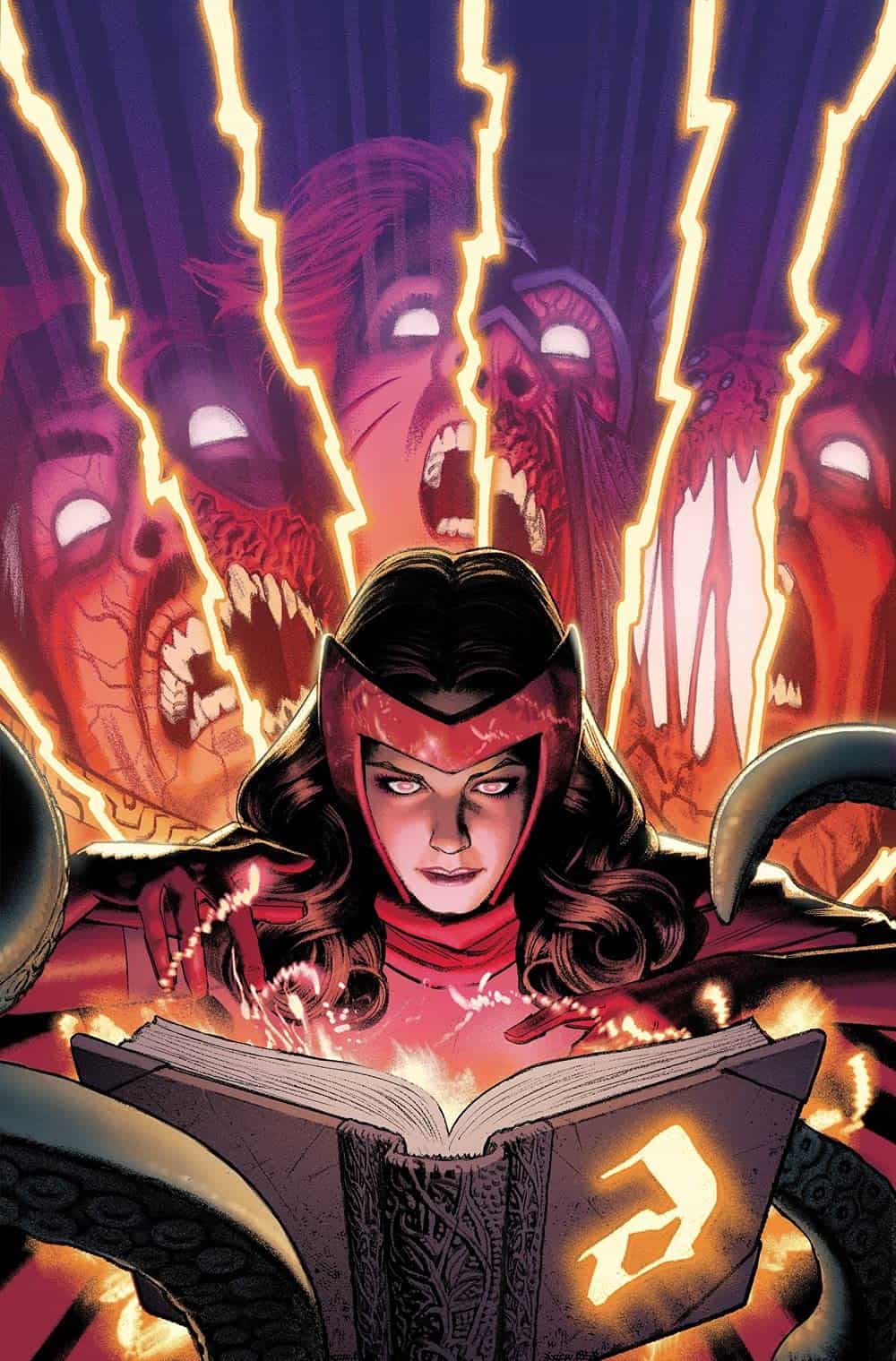 ENTER THE PAGES OF THE DARKHOLD — AND LOSE YOUR MIND IN MIGHTY MARVEL FASHION! Critically acclaimed writer Steve Orlando joins forces with extraordinary artist Cian Tormey for a story that will delight and terrify! For hundreds of years, scholars and heroes alike have searched for the complete text of the Darkhold — a.k.a. the Book of the Damned, written by the elder god Chthon. Now one of the greatest sorcerers in the Multiverse has found it — and Chthon has found him. To save them all, the Scarlet Witch must gather the world’s greatest heroes…and unleash their inner darkness. Witness the Marvel Universe’s descent into chaos!

The magical event is two years in the making, thanks to Covid, but it’s finally here. The Scarlet Witch is awoken from a dead sleep with visions of Ch’Thon wreaking havoc on the world. Ch’Thon is the ancient elder god whose influence tainted the Scarlet Witch, making her the conduit for his power on Earth. This issue heavily centers on the Scarlet Witch and Doctor Doom, two of Marvel’s heaviest magic hitters, and Steve Orlando has Doom’s characterization down perfectly, while Wanda’s a tad hit or miss here. It’s not completely OOC, it just seems a bit off. Fortunately for Orlando, his track record for writing complex, interesting, and empowering female characters, I have complete faith in this tale he’s going to weave. This issue is definitely a set up issue for the event to come, so a majority of the book is full of exposition detailing just how big of a threat Ch’Thon is, and just how powerful the book of the Darkhold is.

The Darkhold will drive anyone mad who dares to read it, but Doom has seemingly found a way to read it without the negative side effects (and it’s a pretty ingenious way of doing so, so kudos to Orlando), and Wanda spends most of the issue trying to convince Doom that the only way to defeat the upcoming threat is to join forces and assemble a team (these types of books always need a team to be assembled), but Doom is Doom, and Doom does everything Doom’s way. One of the biggest omissions from this book is the lack of this dimension’s Sorcerer Supreme, so I’m not sure where this book is, continuity wise. Does this take place before or after the good Doc’s death? Or is he with the Defenders, where he’s trying to get Galactus’s mom’s groove back? Also where is this in regards to Wanda’s murder on Krakoa? She’s in her most current uniform that she wore in Uncanny Avengers, but she’s currently rocking her classic look over at Papa Mags’ trial. Who knows? This would be a great place for those nifty editors boxes to help sort these events out.

The cast of characters is a tad bit of a motley crew (insert ’80s glam rock obligatory joke here – “Dr. Feelgood” is my favorite), and doesn’t really make all that much sense considering this is a magical event, but again, it’s only the first issue so I’m willing to see where Orlando is taking us. This is the first book by Cian Tormey that I’ve read, and I really rather enjoyed it. His style seems to be a tad angular, reminiscent of Declan Shalvey, Alessandro Cappuccio, and Kim Jacinto, and I’m here for it. Wanda looks great here, Ch’Thon looks intimidating and Lovecraftian, and he has a decent take on the rest of the cast featured here. The art is crisp, and easy to follow along. There’s a real sense of motion and movement to his work, and I can’t wait to see what Tormey will bring to this corner of the Marvel universe.

The Scarlet Witch and Doctor Doom are coming face to face with one of the oldest gods in the Marvel firmament, and it looks like if they don’t act fast enough there’ll be hell to pay. Orlando’s got a decent handle on the characters voices, and Tormey is really strutting his stuff here. There are a few issues with how Wanda’s handled, but nothing that detracted from my enjoyment I have high hopes for this event that’s been pushed back nearly a year and a half, thanks to Covid. I hope once this is over we’ll see this team on something high profile.