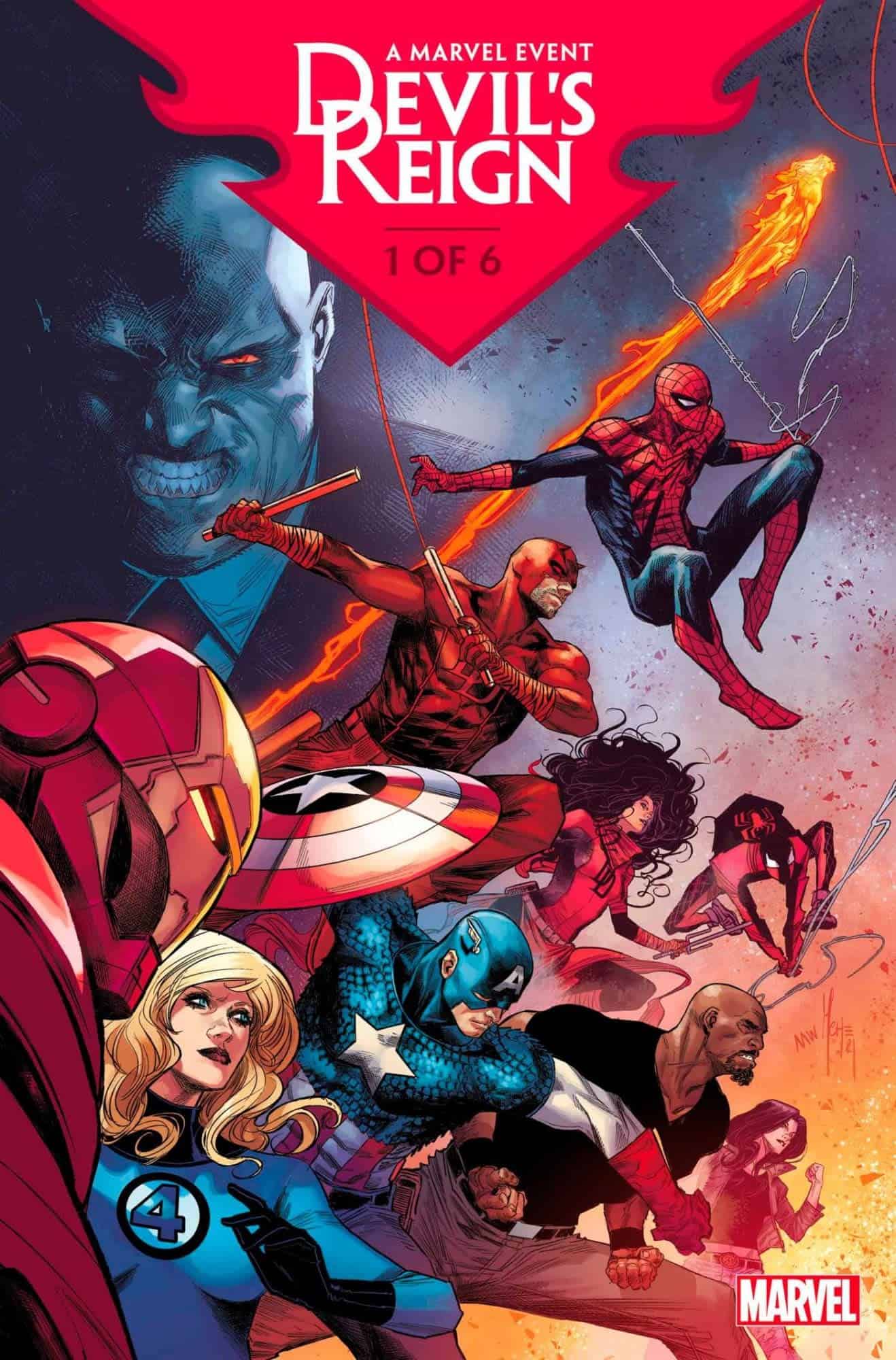 Chip Zdarsky and Marco Checchetto are not fucking around.

Devil’s Reign, spinning out of recent events in the writer’s seminal Daredevil run, is a master class in building tension, delivering narrative suspense, and, ultimately, delivering on expectations.  And while it’s somewhat difficult to appreciate some of the story’s nuances if you haven’t been reading Daredevil on a regular basis, there’s more than enough carefully-laid story beats and dialogue cues that will get the uninitiated up to speed.

(Sidebar: if you aren’t reading Zdarsky’s Daredevil, seriously, drop everything and read it and then come back. I’ll wait.)

In a nutshell, though: Wilson Fisk, formerly the Kingpin of Crime, has elevated to Mayor of New York City. This is bad. But Daredevil is around to keep him in check – that’s good. Except Daredevil is having a crisis of conscience (his latest) and recently remanded himself to prison as a means of clarifying that the law works equally toward more obvious criminals and masked vigilantes alike. That’s… good and bad. But have no fear! Elektra, seeking to reform, has been subbing in as Hell’s Kitchen’s Daredevil, even relinquishing her former murderous ways. That’s good. But Daredevil’s past actions have caught up with him, and the Kingpin has learned that his memory has been tampered with, and that he used to know Daredevil’s secret identity – and now he doesn’t, and knows in his gut that DD is to blame.

Fisk, who has been struggling to acclimate to a “legitimate” position of power, has been an awkward fit in the role of New York’s mayor, but has at last found his mission in using his anger against Daredevil to ban all superheroes within his city’s limits. And quicker than you can say, “Civil War III,” all superhero activity is outlawed.

The “quicker” part is where Zdarsky’s narrative hits a slight snag a bit this issue, because events are set in motion so quickly, it’s hard to get a sense that things are really happening as speedily as they are. The template for Devil’s Reign, Mark Millar’s Civil War, had a major inciting incident to push the narrative forward at breakneck pace, and that sense of urgency made the swiftness of events make sense. Reign, though, is more about one man’s vendetta – which, given the context of Fisk having to maneuver the political process, makes it a bit of a tougher pill to swallow.

But once the ball gets rolling, it gets rolling hard. Miles Morales, Moon Knight, Luke Cage and Jessica Jones, even the Fantastic Four (holy moley, the Thing gets one heckuva great moment to shine) – no body is safe from Fisk’s jackbooted thugs. Readers are even treated to the latest iteration of the Thunderbolts. Zdarsky’s narrative works wonders in delivering a claustrophobic feel, where no one is safe. We may not be rounding up heroes and imprisoning them in the Negative Zone yet, but with the rollercoaster pace everything is moving, it could only be a matter of time before something of that level happens.

Fortunately, Zdarsky brought the very best of his Daredevil artists, Marco Checchetto, along for the ride. This man is a superstar, full stop: 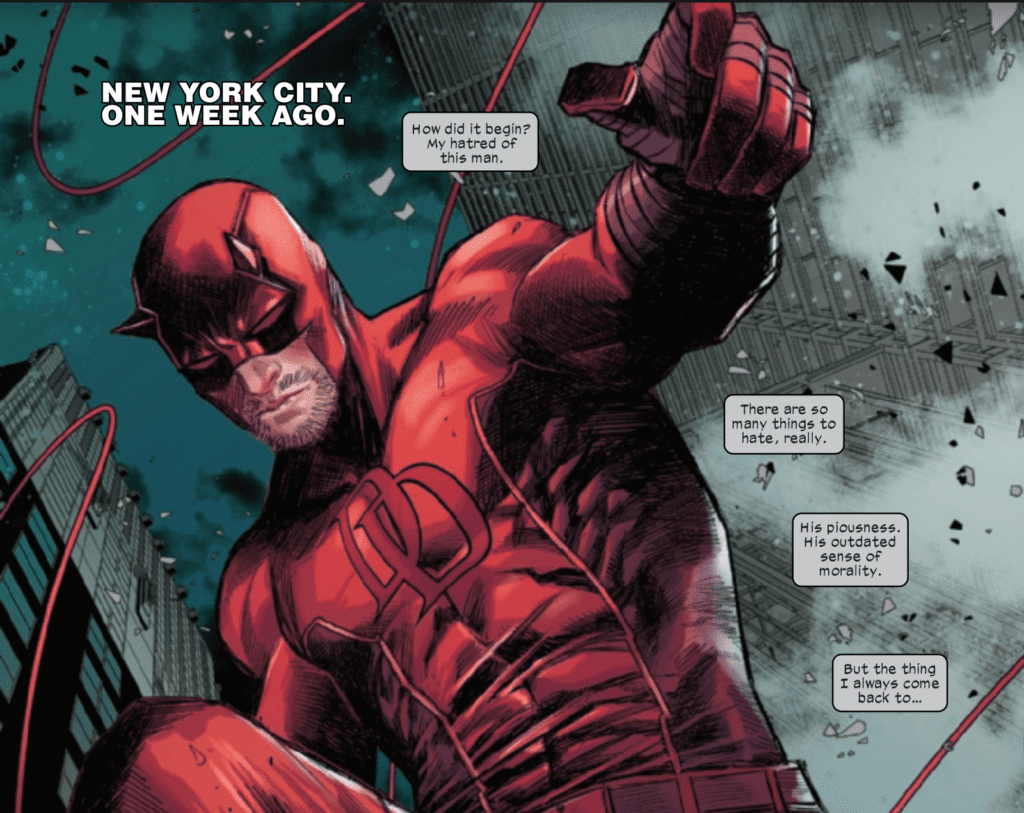 His characters have a realism to them that doesn’t sacrifice their essential hero-ness. In other words, they still look larger than life, and aren’t relegated to “realistic” costumes with fatigues and pouches and other military paraphernalia, but realistic nonetheless. He also draws one helluva skyline – his NYC looks big and cavernous, and realistic without looking photoshopped (or, yeek, traced). And he also knows how to make his characters look legitimately emotional. There’s a real vulnerability to the Kingpin when confronting Daredevil about his tampered-with memories: 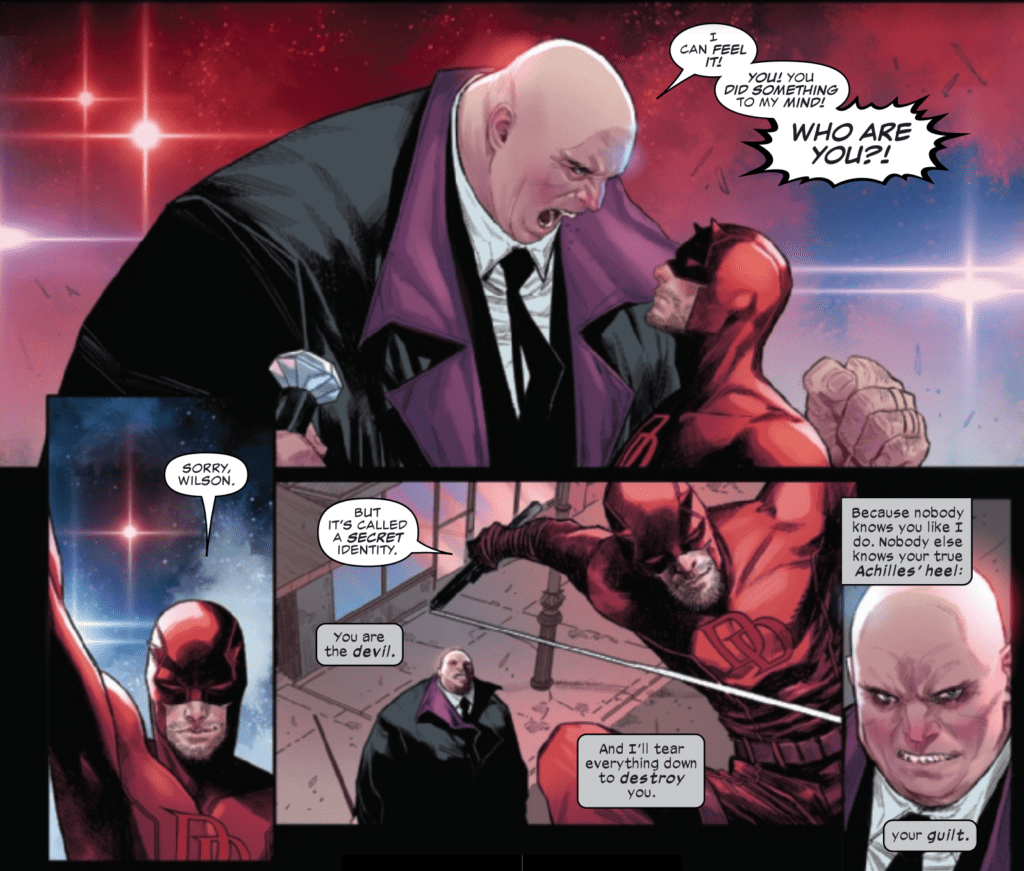 That’s great blocking for both characters, too. Neither Daredevil nor Kingpin is just standing around posing – they’re moving like real, breaking, feeling people. Marcio Menyz’ coloring really brings out the subtle details in Checchetto’s pencil’s too, using a subtle palette to keep everything a bit more down-to-earth, which is very befitting a Daredevil story. Lastly, on the art side, it’s impossible to not tip the hat to letterer Clayton Cowles, who never stops turning out clean, legible and clean-flowing work on multiple books month in and out. He’s a consummate pro who never stops giving his best.

Devil's Reign may hit a familiar narrative beat, and rush its plot a tad, but as a work of storytelling art it's one of the best comics (especially event comics) Marvel has put out in quite some time. Credit a completely in-sync creative team, as well as a narrative with a high sense of urgency and personal stakes, and you have a comic absolutely worth reading.