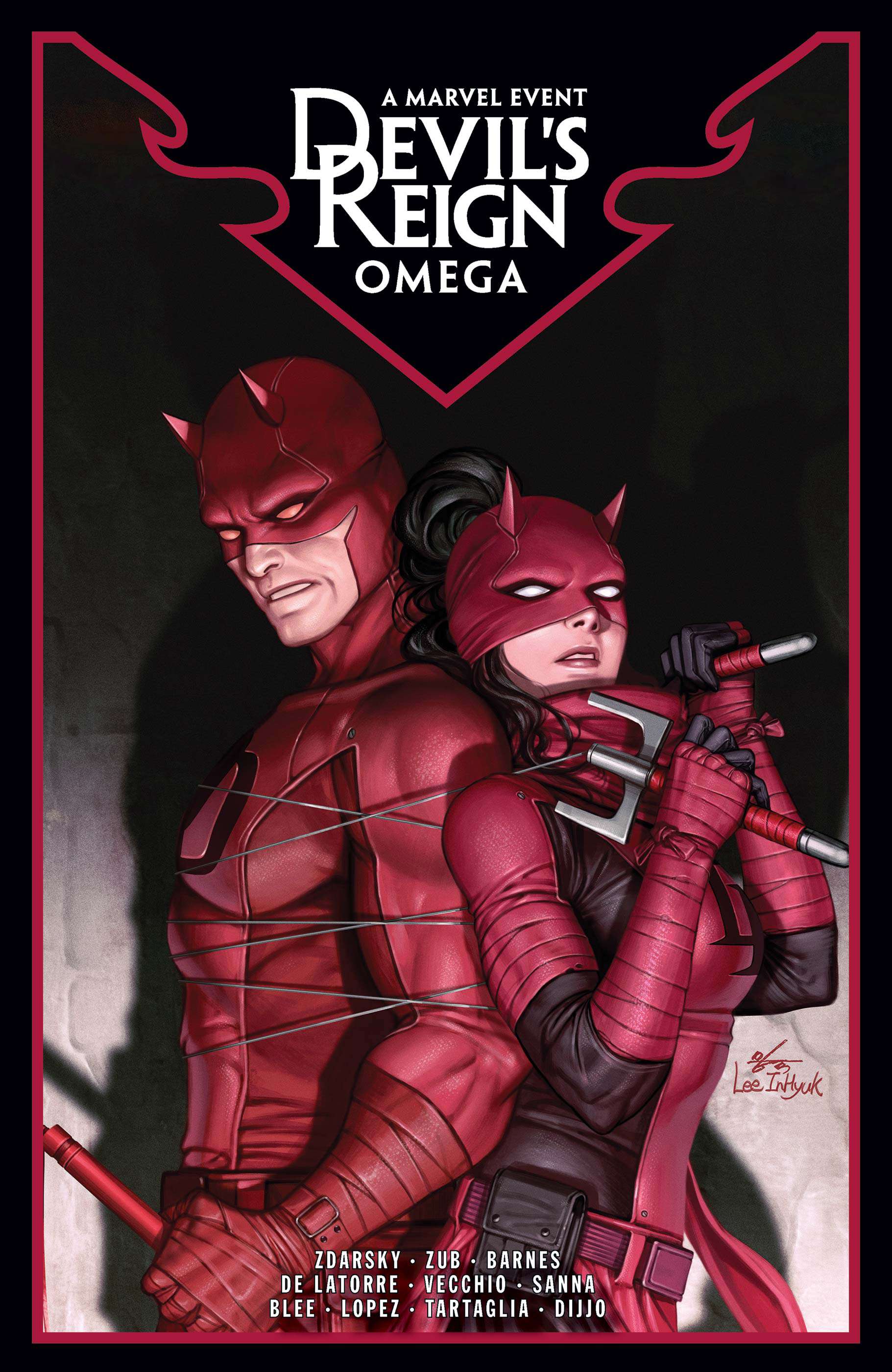 The devil's reign of Wilson Fisk is over! It's a new day as a new mayor rises in New York City, a new Daredevil rises in Hell's Kitchen, and a new team of Thunderbolts reclaims a legacy!

Devil’s Reign: Omega acts as an epilogue and coda of sorts for the entire Devil’s Reign miniseries, brining regular Daredevil writer Chip Zdarsky, upcoming Thunderbolts scribe Jim Zub, and Rodney Barnes (Killadelphia) together to sort out the aftermath of Wilson Fisk’s reign of terror. The results are predictably mixed, given there are three different writers with very different styles, but no less entertaining and worth reading.

Chip Zdarsky brings his usual A-game to the most direct epilogue to his Devil’s Reign mini, delving into the death of Mike Murdock. This is absolutely not new reader-friendly, though – nor was the Mike subplot in general, for those reading Devil’s Reign but not Daredevil. I’d also argue that the deus ex machina of Mike’s arrival midway through Zdarsky’s DD run was the weakest point of the run, so pivoting Matt Murdock’s story based on his brother’s demise – with the world thinking it was actually him who died – is an iffy prospect at best. On the one hand, it sets the stage for Matt and Elektra to leave New York to battle the hand, but on the other, it’s disengenous at best for Matt to abandon his city and let his friends think he’s dead. It also calls into question his morality, substituting his brother for himself – and therefore not giving his friends the proper chance to mourn Mike. In a very typical Matt Murdock way, he rationalizes his actions, but if one thang can be said about Zdarsky’s DD run, it’s that he isn’t afraid to expose Matt’s particularly Catholic hypocrisy for what it is. It makes for compelling storytelling, but doesn’t exactly cast the titular hero in the best light.

Far better represented are Luke Cage and Jessica Jones, navigating the labyrinths of the mayor’s office Cage now inhabits. This is a storyline rife with possibility, as the legal and political systems in place are chilly at best to Cage’s presence as a reformer. There’s also an interesting wrinkle involving the last-remaining empowered Purple Child, but sorry, no spoilers here!

Rafael De LaTorre’s art is a good continuation of the style Marco Checchetto brought to Devil’s Reign, grounded in realism and a street-level sensibility that fits Daredevil’s corner of the Marvel world quite well. It shouldn’t come as a shock that he’s Zdarsky’s artist on July’s Daredevil #1 (sigh, again), as his style segues very well from Checchetto’s.

Cage’s navigation of the ins and outs of political life wends its way here, written by Killadelphia‘s Rodney Barnes, who has a keen eye for little details, particularly when it comes to our current political climate in America. Cage, preparing for his first public speech as mayor, must contend with a crowd that is highly hostile to his presence, and forever loyal to  Fisk as their leader. This is a story I’d very much like to see explored in a future Cage series (or even miniseries) as written by Barnes. The obvious analogy is there, but Barnes is smart enough not to hit the nail on the head too hard. His Cage is confident, serious, and for the first time in his life, in a position to effect positive change for people on a large scale. He’s clearly excited, and maybe even a tad nervous (which is a welcome position of vulnerability for him), but clear-eyed about the challenges before him. Guillermo Sanna’s art brings to mind a less-heavily-inked John Paul Leon (R.I.P.) mixed with early Mike Mignola. He’s definitely a talent to watch. His Luke Cage is large, but never imposing. There’s a sense here that this creative team is previewing a new Cage-centric series at some point this fall – I genuinely hope that proves to be the case.

Jim Zub brings the set-up for his and artist Luciano Vecchio’s upcoming Thunderbolts miniseries, in which Mayor Cage seeks to rehabilitate the team’s brand after Wilson Fisk turned them into his legalized brute squad. There’s a lot of charm to Zub’s story, as well as earnest fun that’s grounded in a strong moral sensibility. I’d expect no less from the author. This is a solid set-up for the new mini, though I’m less sold on Vecchio being the right artist for it. His work is solid, but a little on the light-and-frothy side for what I’d expect for a Thunderbolts book. It’s clean – maybe a little too clean for a book that plays in the grittier corners of the Marvel U. There’s some great space for Monica Rambeau to play (expect to see more of her in comics in the coming couple of years as her role in the MCU ramps up), and frankly, some fair commentary on media portrayals of so-called “angry black women” in public spheres. I think Zub’s upcoming miniseries is going to be fun (especially since it features Hawkeye, who hopefully will be out of his recent “derp mode” portrayals), but remain skeptical to it having long-term impact on the overall Thunderbolts brand.

A fine collection of stories detailing the fallout from Devil's Reign, and setting up two, possibly three new series. The future looks bright for Daredevil, Luke Cage, and Marvel's other assorted street-level heroes!