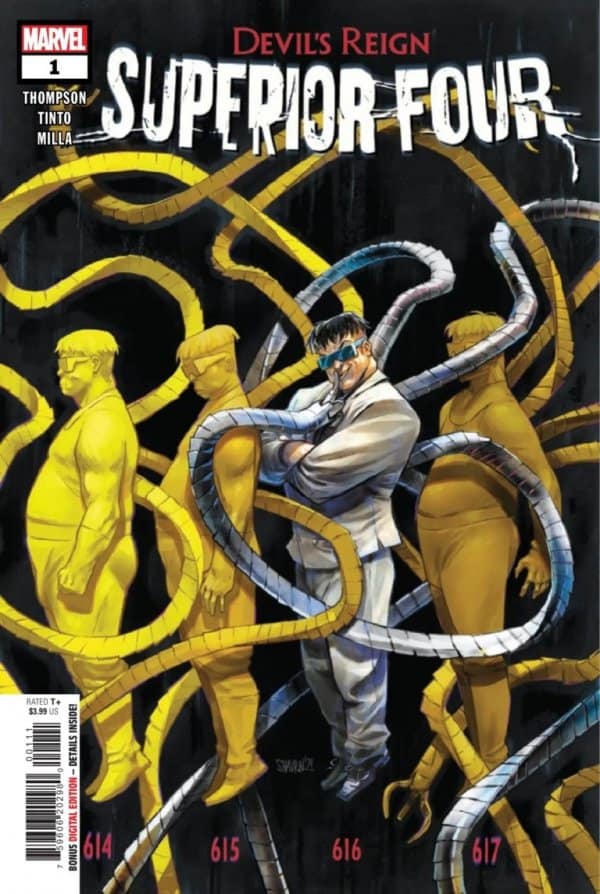 How does one become... superior? If you're Doctor Octopus, you mine the multiverse using appropriated Reed Richards technology!

Devil’s Reign: Superior Four #1 doesn’t shake the world, but it is definitely a fun comic if nothing else. That may sound like damning it with faint praise, but given the disposable nature of so many event comic tie-ins, the very fact that Zac Thompson’s smart script leaves any impression is no small miracle. Spilling out of events in Devil’s Reign #2, Dr. Octopus – continuing to regress to full-on villain mode post-Superior Spider-Man – at last has a chance to prove that he in fact is superior (to everybody, naturally) by accessing multiversal variants of himself and defeating them.

Zac Thompson (Ka-Zar: Lord of the Savage Land, I Breathed a Body, Undone by Blood) is one of the smartest writers to emerge in the last five years or so, bringing a sensibility to his work that evokes a smart hybrid of Grant Morrison’s left-of-center intellect with a pre-scandal Warren Ellis’s wonkiness. He also seems to understand that the very nature of this assignment is completely bonkers, so doesn’t waste any time leaning into it completely, complete with Doc Ock doppelgangers modeled after Hulk, Wolverine, and Ghost Rider – because hey, why not? In fairness, it might have been more fun to have seen some more slightly original iterations that spoke more to the various aspects of Octavius’ psyche, but beggars can’t be choosers.

What unfolds is a quest of one man to prove himself the “superior” version of himself – a theme echoing his time as Spider-Man, which ultimately speaks to Otto’s own insecurities about himself. Like all great villains, he’s always the hero of his own story, and refuses to accept that he may be in the wrong. But a part of him has, since reverting to his corpulent, villainous self, been fighting that notion – deep down, he knows his selfish actions are in the wrong. Thompson understands that a quiet evolution of Doctor Octopus has been underway for the past few years, and uses this opportunity to address that, quite literally.

Davide Tinto, fresh off of Image’s Commanders in Crisis, is a welcome sight on this (or any) comic. His linework is smooth and efficient, and highly evocative in its body language and emotion. His faces, in particular, always reflect the inner workings of a given character. Tinto is a fresh voice in the industry, unapologetically amplified by Matt Milla’s colors and Ariana Maher’s letters.

Devil’s Reign: Superior Four may not be a comic that demands to be read, and it isn’t a central part of the overarching Devil’s Reign plot, but it is certainly fun. I’m a sucker for comics that put so-called “villains” in the role of protagonist, and Superior Four delivers on what that type of narrative can deliver in spades.

Devil's Reign: Superior Four #1 is a comic that has many more smarts and much more fun than it has any right to. Don't let its tie-in status fool you - this is a highly enjoyable read.