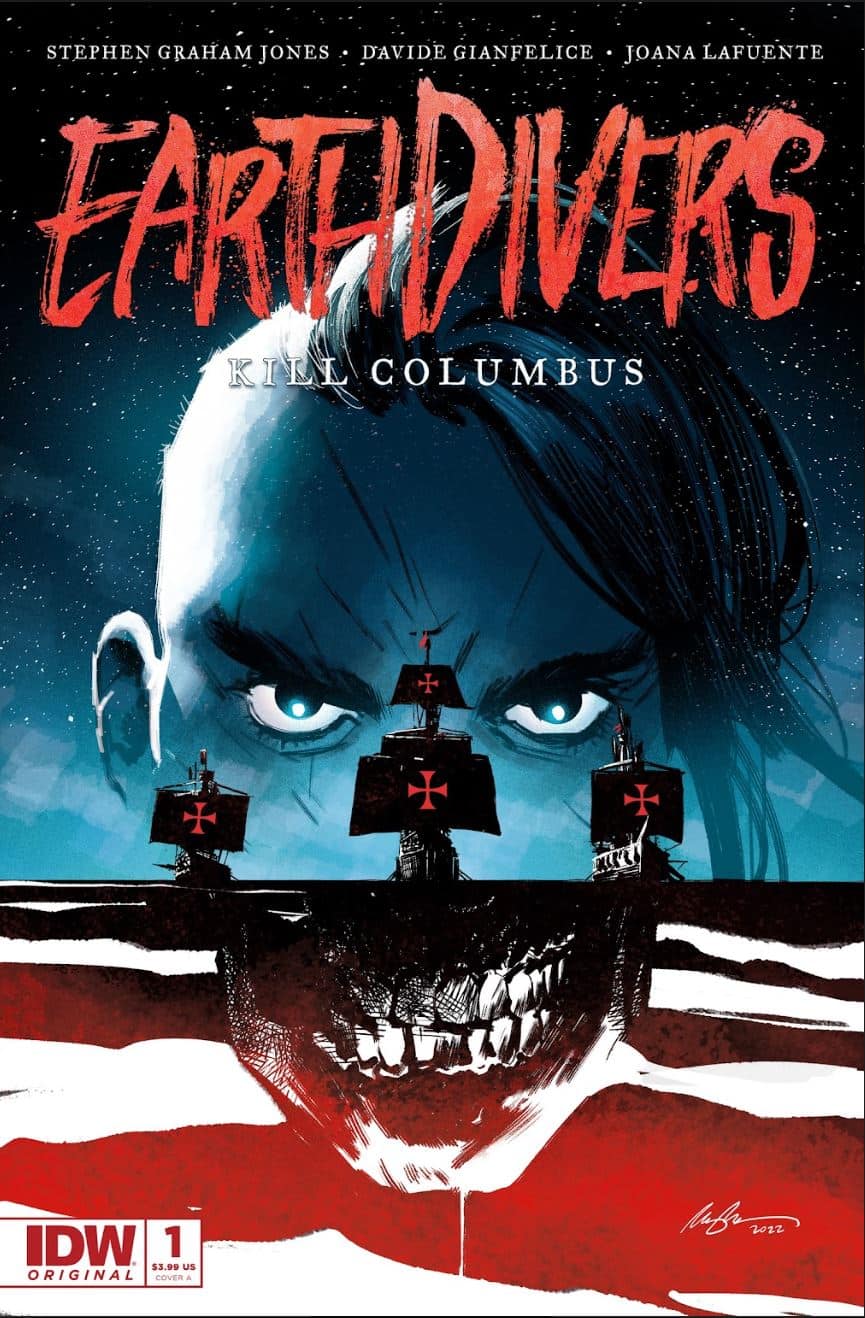 The year is 2112, and worldwide civilization is on the brink of collapse. Four Indigenous survivors of the end times have a bold plan, though: send one of them back in time to prevent the founding of America.

For the sake of the entire world... it's time to KILL COLUMBUS.

There is a lot to consider and unpack in IDW’s bold new series Earthdivers. Where to begin? With the People’s History of the United States-style perspective on American history? With the fact that this series is very much in line with current hot button topic CRT in its critical examination of the darker sides of the United States’ story? With the fact that the series’ leads are all First Americans set on righting the genocide of their various people and maybe – just maybe – saving the world in the process?

Nobody said that an accurate depiction of history would be an easy pill to swallow. Nor is Earthdivers – but that’s a very good thing.

Written by acclaimed novelist Stephen Graham Jones (The Only Good Indians, My Heart is a Chainsaw), Earthdivers takes a Terminator-esque approach to fixing the present via time travel and applies it to an urgent history lesson about accepting the awful foundations of the United States of America. Every elementary-age kid here learns the whitewashed version of events: Columbus sailed the Nina, Pinta, and Santa Maria across the Atlantic Ocean and “discovered” America in 1492, which opened the doors to European settlers and the eventual founding of the United States of America. What a happy fairytale; the truth being of course that Columbus was a slaver, landed in Cuba, not North America, and personally oversaw the genocide of the indigenous Taino people.

Not exactly an inspirational founding tale.

But the myth has persisted over the decades, and it has become second-nature to look the other way and brush aside any of he uncomfortable truths that might challenge any notions of an inherent American benevolence and righteousness. This is propaganda, of course; this is cultural indoctrination. Challenge the standard public-educated American student on the notion of Christopher Columbus’s nature as “a good guy,” and you’ll inevitably be met with a blank stare and/or outright hostility depending on the age and indoctrination level of the questioned.

Earthdivers seeks to challenge that thinking head-on. And it isn’t exactly subtle about its intentions, either: our four Indigenous leads, Tad, Sosh, Yellow Kidney, and Emily, have a very simple mission:

Again, for the cheap seats: this comic is a lot to process.

Yet thankfully, it avoids taking cheap shots or making blanket “America is bad” statements. Instead, writer Jones and artists Davide Gianfelice, Joana LaFuente, and Steve Wands tell a story of accountability, and owning up to past mistakes in a way that pierces the veil of so many decades’ worth of jingoistic programming. It avoids easy answers and easier solutions, too: once in the past of 1492, Tad must reckon with the murky morality of whether taking a person’s life (other than Columbus’) is worth his end goals. Do the ends justify the means? Do they ever? Should they, given the scale of centuries’ worth of history and death, up to and including the impending demise of all humanity? Earthdivers offers no cheap answers, but instead lays bare the questions for the reader to ponder themselves rather than preaching and pontificating. That’s the mark of a writer who is confident in their craft well enough to trust their reader to pick up what they’re putting down.

For his part, newcomer comics writer Jones does a great job of laying out his treatise, which is made easier by the steady, practiced art of Gianfelice. The narrative flow stumbles a bit, though, in the execution: signs pop up that Jones doesn’t quite have a firm grip on the mechanics of writing a comic, even though he has a wonderful and urgent story to tell. Some of the dialogue is a bit stilted; scene transitions happen somewhat jarringly at times. The leads themselves aren’t wholly fleshed out very well yet; Tad is mostly defined by his mission and its questionable ethics more than anything else. In choosing to open the story up in medias res, Jones is taking a leap of faith that readers will be able to catch on to his worldbuilding, but it’s in such a hurry to get to the time-traveling that it feels like the world itself that’s trying to be saved isn’t properly defined.

Instead, we’re given some broad ideas: the oceans rose, drowning humanity; drinkable water became a rare commodity; the rich fled into space; the survivors stubbornly persist. All of that is conveyed on the first page across four panels; beyond that, we don’t know a thing about this hellscape our leads are so desperate to correct. With a bit of a slower rollout – or maybe some scene past/present scene cuts that helped define the world with a bit more clarity – Earthdivers‘s stakes might feel higher. Instead, the stakes stand more in the shadow of the story’s main hook, that time-travelling First Americans are going to assassinate Columbus. Which is a great premise – now, Jones needs to settle in and give readers more of a reason to care about these characters and their world beyond that.

But despite its flaws, Earthdivers feels fresh, compelling, and bold. It’s a comic that meets our moment where CRT is a flashpoint that should not be. It’s a comic that stands head and shoulders apart from the rest of the pack on the shelves, offering something fresh and different and has a perspective that actually has something to say. Don’t wait for the trade – this is an urgent comic that begs to be read.

Earthdivers boldly, brashly challenges historical convention, and despite some narrative bumps in the road, succeeds in hooking readers in with its mammoth premise. Now, if it can slow down and give itself space to breathe in future issues, it might well turn out to be a modern classic. Hats off to the entire creative team and IDW for taking such a gamble on a comic that's sure to court controversy in all the right ways.