ADVANCED REVIEW: Iron Cat #1: The Black Cat’s Back and You’re Gonna Be in Trouble… 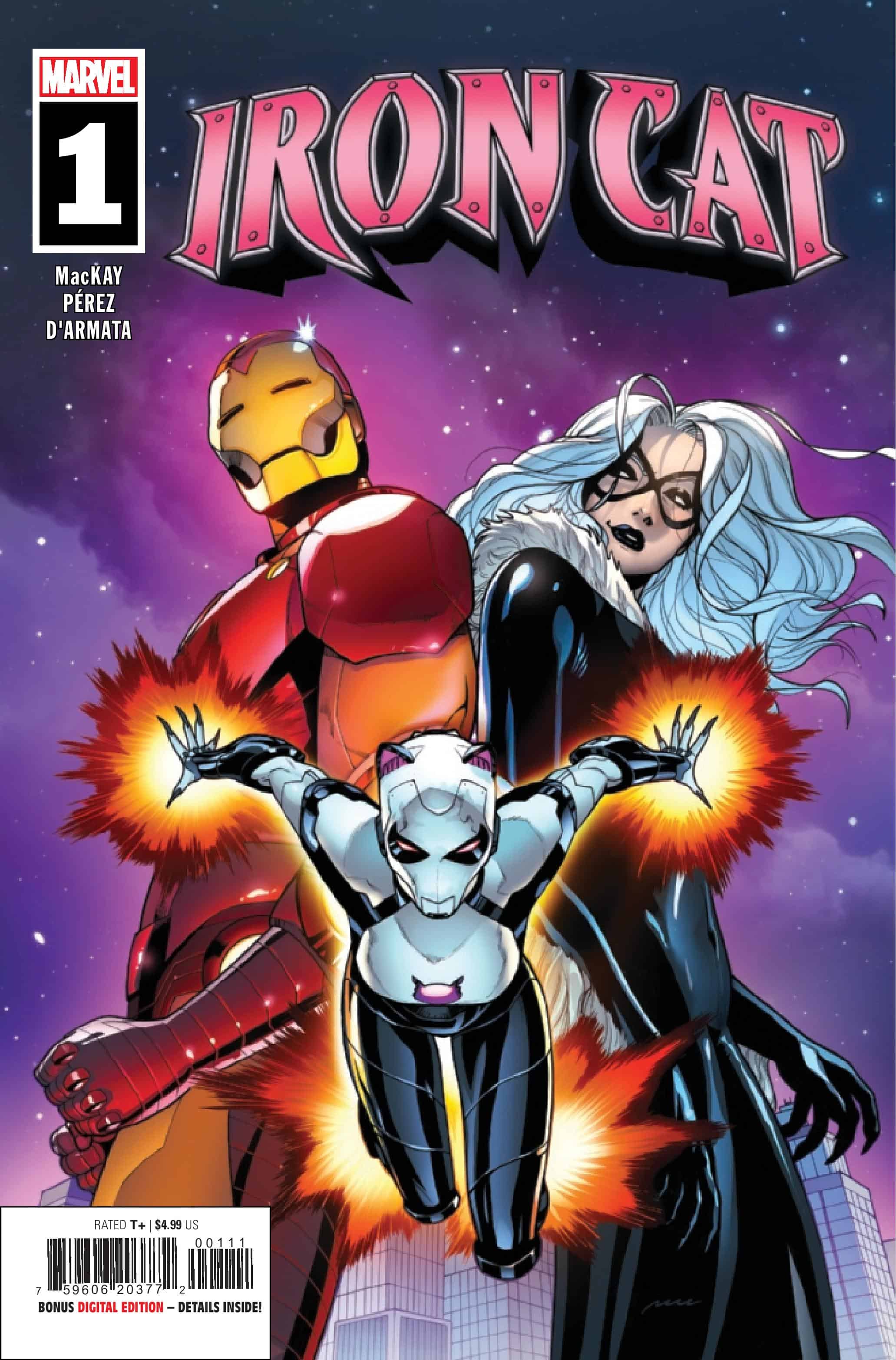 The Iron Cat armor made its first appearance in BLACK CAT #11 but both Black Cat and Iron Man thought that was the last they would see of it. If Felicia is surprised to see the armor again, you can imagine how furious Tony is. There's someone new in the Iron Cat armor and they have a plan that will put them in the crosshairs of all the heroes of the Marvel Universe. Both Iron Man and Black Cat's secrets and mistakes are going to come back to haunt them and it's going to get ROUGH! Don't miss this fantastic new miniseries!

Because you demanded it! Jed MacKay is back with Felicia Hardy (aka the Black Cat!), and it feels like he never left. Joining MacKay on art duties is Pere Perez, who is no stranger to Marvel female solos. He recently finished his run on Spider-Woman with Karla Pacheco, and he didn’t miss a single issue. I was a huge fan of MacKay’s run on both volumes of Felicia’s book, so when I heard he was coming back for a five-issue miniseries featuring the Iron Cat armor, I just knew I had to be the one to review it. If you’re unfamiliar with the Iron Cat armor, it was an armor Felicia had during a team up with Iron Man, and it was as every bit of fun and off the wall that you’d expect to see in a story involving the two.

The story starts off where almost every story involving Marvel’s greatest Cat burglar (snort), she’s in the middle of a heist! She’s on the hunt for one of those capers that got bungled from her past, so she decides to finish the job. Jed takes us down memory lane, giving us the backstory on the job, as well as introducing a character that’ll become pivotal to the mini. On top of all this, MacKay and Perez deliver us more of the relationship between the Black Cat, and her father figure/mentor, the Black Fox, which if you’ve read the previous two volumes was a very deep, and emotional relationship between the two. MacKay’s handling of this relationship was quite possibly one of his strongest plot points from his previous runs, so what we get here is most definitely welcome.

Tamara’s introduction, and the reason behind her animosity towards Cat (she blames Felicia for Fox’s death. See: Black Cat: Gilded City), is something I applaud. The previous volume unfortunately was cancelled before Felicia had the chance to actually process all of those events, and I’m glad to see MacKay get the chance to bring some closure to Cat. While Tamara so far is a tabula rasa, I’m intrigued to see what she’ll bring to the table, and how her presence will factor into the Cat/Fox dynamic.

Pere Perez is providing the art, and it is amazing. I’m not sure if you’re aware of who he is, or what his style is like, but I can guarantee you’ll become a fan by the end of this mini. His style is lush and crisp, providing both movement and emotion. Every panel packs a punch, leaving you wanting more. Perez’s style continues to progress here so much from his run on Archer & Armstrong for Valiant, and the polish that he’s shown over the years could easily make him one of those artists to watch out for.

Jed MacKay reunites with Felicia Hardy, the Black Cat, and true to form, we get an issue full of laugh out loud hijinks. MacKay’s pitch perfect voice for Hardy really shines through, mixed with an energetic staccato pattern for the action scenes, makes it feel like it’s going 0 to 60 in mere seconds. Add in Iron Man and it’s a sure fire hit. If this mini is half as good as  the ongoings, we’re in for a real treat.

ADVANCED REVIEW: Iron Cat #1: The Black Cat’s Back and You’re Gonna Be in Trouble…