Ka-Zar: Lord of the Savage Land #1 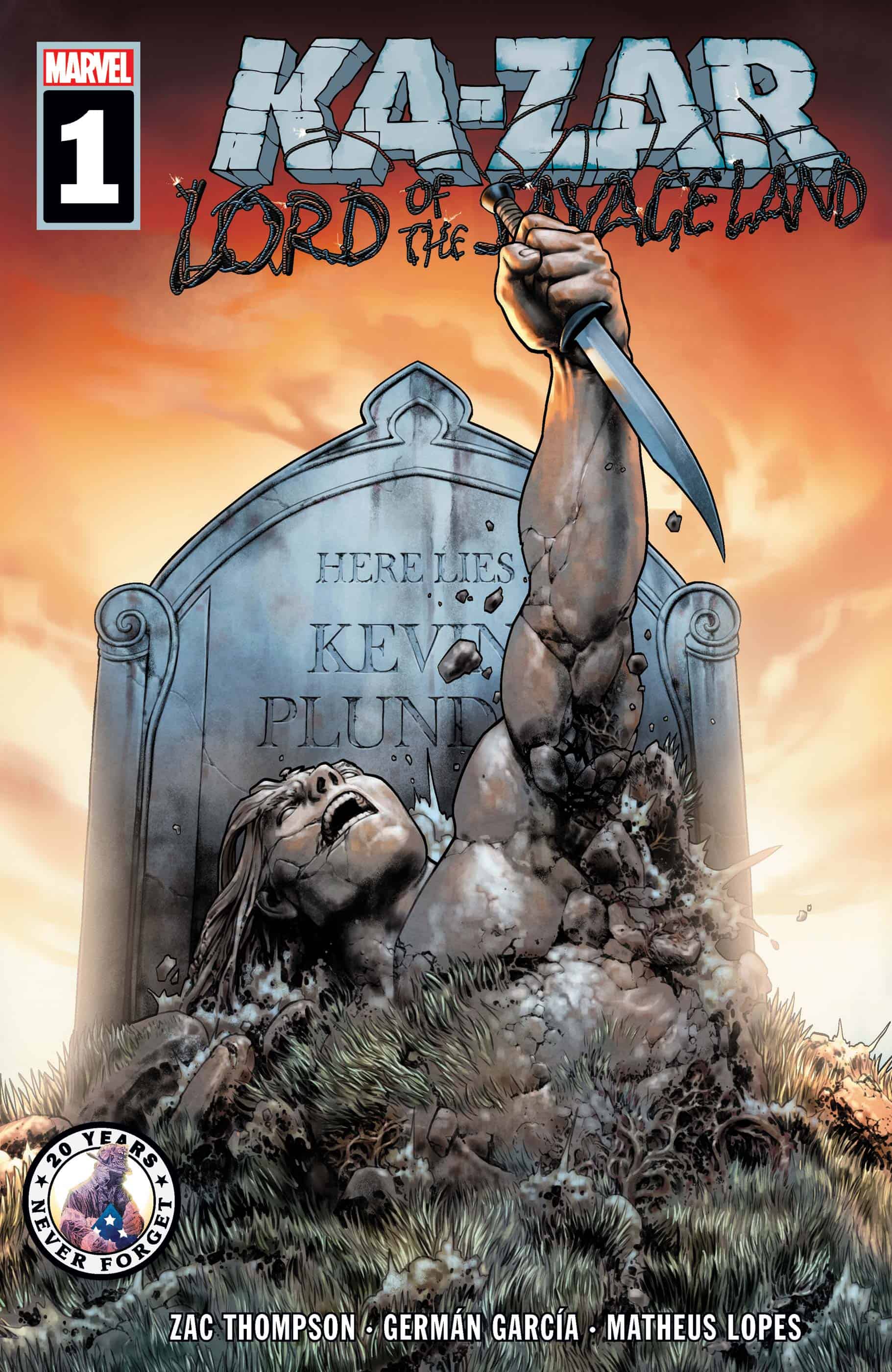 And then he didn't.

This is the story of what comes next.

Ka-Zar: Lord of the Savage Land #1 is a deeply weird comic.

And I loved it.

Ka-Zar is a character that writers have always struggled to know what to do with; essentially conceived as a Tarzan clone, Kevin Plunder has always been at his best when he’s out of his element (see: the classic and criminally underappreciated Mark Waid/Andy Kubert run from the late ’90s). He also has a tricky background as a white savior trope but also surrounded by questionable representation of indigenous peoples, none of which makes him particularly palatable to many fans circa the year of our lord 2021.

So the conundrum facing writer Zac Thompson and artists German Garcia, Matheus Lopes, and Joe Caramagna is: how on Earth do you translate a character with such fundamentally challenging underpinnings for modern audiences? Fortunately, last year’s Empyre: Captain America and the Avengers comic laid some interesting groundwork — in that it killed Ka-Zar and resurrected him with weird, god-of-the-Savage-Land type powers. What that means, exactly, is what’s being explored here.

Some might complain that giving Ka-Zar a form of superpowers goes against his very nature as a man-against-the-elements heroic ideal; I’d counter that his ability to survive and even thrive amid the chaos and danger of the Savage Land is a pretty amazing superpower in and of itself. Thompson shows Ka-Zar learning what being attuned to the entirety of the Savage Land means through fits, starts, and trial and error, but throughout, he never stops being the guy fans have come to know and love over the decades. He’s a hero, a survivalist, a tactician, and a family man. Shanna and now-teenage son Matthew are along for the ride (not to mention Zabu, of course!). All of the familiar elements surrounding Ka-Zar are there; it’s how Thompson subtly (and sometimes not so subtly, RE: that t-rex) remixes them that paints a picture of how our hero and his world can be adapted for modern times without losing the essence of what makes them special. There’s man vs. nature, dinosaurs, existential crises, more dinosaurs, coming-of-age melodrama, even more dinosaurs, and even body horror all at play, and not one of these elements feels like it’s overwhelming the others.

The opening scene hearkens very specifically back to late 1800s/early 1900s imperialist England in a way that would make Rudyard Kipling proud, brought effortlessly to life by German Garcia and Matheus Lopes. These two are artistic geniuses; Lopes’ soft, bright hues in particular render the Savage Land as a place of lush, natural colors and the brightest of sunlight, unsullied by air pollution or smog. Garcia’s pencils have a slight ’60s vibe to them, particularly in the way he renders Shanna in a manner that lovingly brings to mind Tim Sale drawing Gwen Stacy way back in Spider-Man: Blue. Joe Caramagna remains a consummate professional and knows exactly what style to bring for this story; his letters have a rougher edge to them than we traditionally see from him that complements the story very well.

There’s a central mystery in Ka-Zar: Lord of the Savage Land that ties thematically into our hero’s rebirth journey. Something is happening to the land he calls home, too, something strange and unforeseen that stands diametrically opposed to Ka-Zar’s newfound in-touch-with-nature status. That something involves his teenage-snit-having son Matthew, and allows for an artistic inventiveness from the art team that is pulled off with seeming ease. For all the small detail this duo cram into some of the pages, I had to work to study some of them to make sure I was catching everything. That’s a pretty tall order in and of itself, though sometimes, Lopes’ coloring seems to overpower Garcia’s pencils to a degree that some of the finer details are actually lost. That’s a pretty minor complaint in the grand scheme of things, though, especially since it could have just been a production side-effect.

The only real barrier to casual fans being able to jump into this leg of Ka-Zar’s journey is that it completely relies on having read Empyre: Captain America and the Avengers. There’s a recap page, but it only hits the broad strokes of Ka-Zar’s death and resurrection in that miniseries, and Thompson barrels straight ahead assuming readers know all the details. That isn’t a fault to be laid on Thompson’s feet, though; editorial probably should have tightened up the recap page a bit to avoid this stumble. With that in mind, fans who didn’t read that miniseries and are expecting a more traditional, straightforward Ka-Zar yarn are bound to be disappointed or confused. That said, Lord of the Savage Land is a stellar start to a quirky miniseries that’s well beyond Marvel’s usual comfort zone. Couple this with the recently-begun Kang miniseries and Christopher Priest’s U.S.Agent earlier this year, and we may well be seeing the dawn of a new golden era of Marvel experimenting with some of its B- and C-listers. I’m all for it.

Ka-Zar: Lord of the Savage Land #1 isn't at all what fans are expecting, and that's an excellent thing. Gorgeous art complements a thoughtful story that seeks to redefine Ka-Zar for the 21st century. Don't miss out on this under-the-radar miniseries!