The King of Killers, Book 1 Chapter 1: 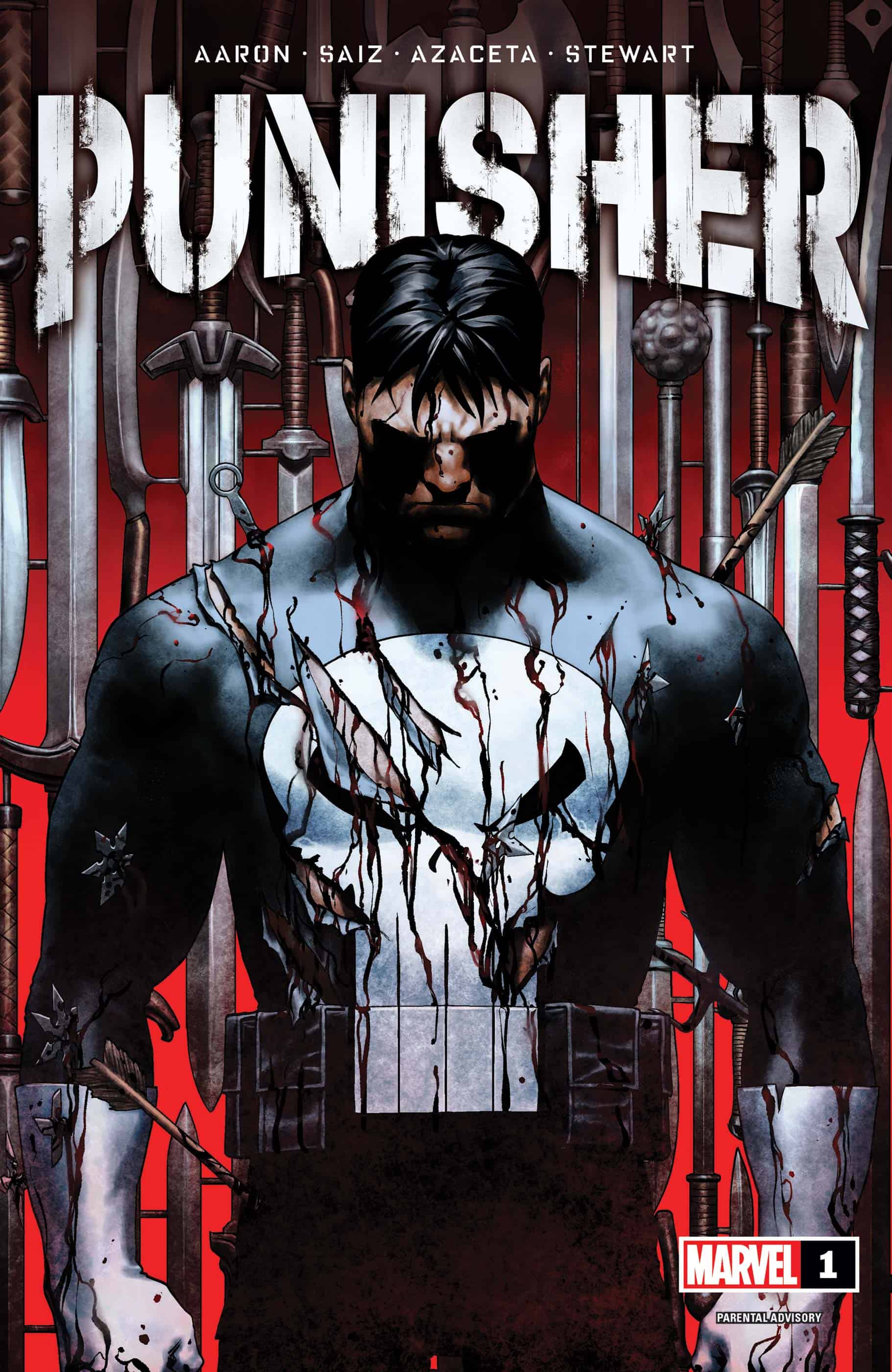 The Punisher is back... but what does that mean in 2022? How can the character be evolved while still maintaining his essence - particularly when his emblem and likeness has been co-opted by so many unsavory societal elements?

Suffice to say, the Hand has an idea or two...

But what does that really mean for the character?

Marvel has a Punisher problem. The character, born in the ’70s as comics’ answer to Dirty Harry, was codified during the ‘roided-out gung-ho he-man action movie ’80s, and reached peak cultural saturation during the ’90s. After a resurgence in popularity in the ’00s thanks to the character-defining Punisher MAX by Garth Ennis, the character has had multiple incarnations, including various well-intended attempts at reinventing the wheel which didn’t necessarily go anywhere permanent. The Punisher remains the Punisher: Frank Castle, by virtue of how the character is fundamentally built, doesn’t change. You can (and should) change the circumstances around him to provide him with new challenges, but historically, all efforts to turn him into something he isn’t (like an agent of Heaven who kills demons) have been greeted by enthusiasm from fans with a collective “thud.”

But then a curious thing happened.

As a backlash against the rise of Black Lives Matter and a sweeping demand for police accountability in America and an end to institutional racism, certain right-wing elements co-opted the Punisher’s logo as a sort of means of communicating their own “back the blue” mindset as filtered through a bizarre misunderstanding that the Punisher is in no way whatsoever representative of law and order. In fact, the Punisher is a mass murderer, operating outside the law, and by dovetailing his methods with law enforcement, these adherents were openly showing their support for police brutality and unaccountable murder. Police, too, adopted his emblem, which is infinitely more concerning and speaks to the toxicity and entitlement of the “warrior cop” mentality.

The Punisher is fundamentally a villain. These people misunderstood that. 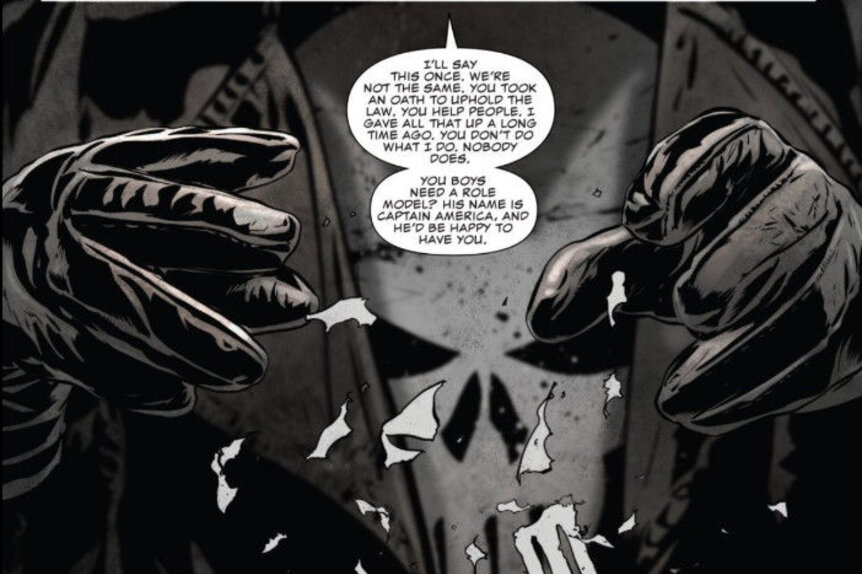 The comic was quickly cancelled due to the “controversy” stemming from this sequence. Marvel’s parent company Disney wanted safety, not controversy in their product.

The Punisher has been seldom seen since then, until now.

Writer Jason Aaron has contrived a way to evolve Frank Castle away from his most consistent status in a way that at once feels natural and a complete and utter stretch: Why not have him be the head of the Hand?

Aaron, who himself had a stint writing Frank about ten years ago in the second MAX volume (drawn by the late, great Steve Dillon), certainly has his work cut out for him. He not only has to find a way to redefine the Punisher to meet the expectations of our current reality, he also has to do so in a way that doesn’t feel like a betrayal of who he is. So, when that infamous assassin/ninja organization comes knocking with an offer of being their so-called “King of Killers,” Frank is given an offer he can’t refuse. What is it? No spoilers, but it gets right to the heart of what makes the Punisher tick. And that in and of itself is intriguing.

But on the other hand – how much sense does it really make for Frank Castle to join a group of known murderers? They’re exactly the type of people he’s sworn to eradicate from the Earth. Suffice to say, getting him past that and fully into joining them – even with the hook Aaron provided – feels like too enormous a leap of faith to be fully believable. Obviously, with there still being eleven issues to go in this maxiseries, there’s quite a bit left to be seen, but at this point, the contrivance feels unconvincing at best and disingenuous at worst.

That isn’t fully Aaron’s fault.  He’s been given an impossible task with this series. And maybe, leaning into the fact that the Punisher is in fact a villain by having him join up with the Hand is just what the doctor ordered – or, it could be a terrible miscalculation that will someday be waved off with a dismissive hand as yet another misguided attempt to recreate Frank Castle’s wheel. The comic, taken solely on the merits of its storytelling execution, hits all the appropriate marks, and for those willing to go on this journey, leaves enough dangling plot threads to bring them back for more. Skeptics and cynics, though, will likely be left feeling a bit discombobulated from the experience.

Jesus Saiz pencils and inks the art, bringing his usual uncanny valley approach to his work. This approach feels a bit ill-suited to the Punisher, even if the art itself is gorgeous. The Punisher’s world is typically rendered as dark and grimy (see previous volume artist Szymon Kudranski’s work for an extreme example); Saiz’s work is light, bright, and even sunny in its decorum – even when he’s drawing Frank Castle slaughtering ninjas by the bucketful. As great as his art is, I’m yet to be convinced that he’s the right fit for this particular comic. Time will tell. But with Paul Azaceta, Dave Stewart, and Cory Petit rounding out the art team, even if Saiz’s work winds up going down a bit wrong in the final analysis, nobody – and I mean nobody – will be able to say it wasn’t a gorgeously valiant effort.

Will this newest incarnation and re-envisioning of the Punisher be enough to alter the character's trajectory from unlikely and misunderstood right-wing hero by putting him in league with the Hand? It's far too early to know, but at the very least, this little experiment is off to an interesting - if unconvincing - start.