ADVANCED REVIEW: The Thing #1: It Ain’t Easy Being Orange 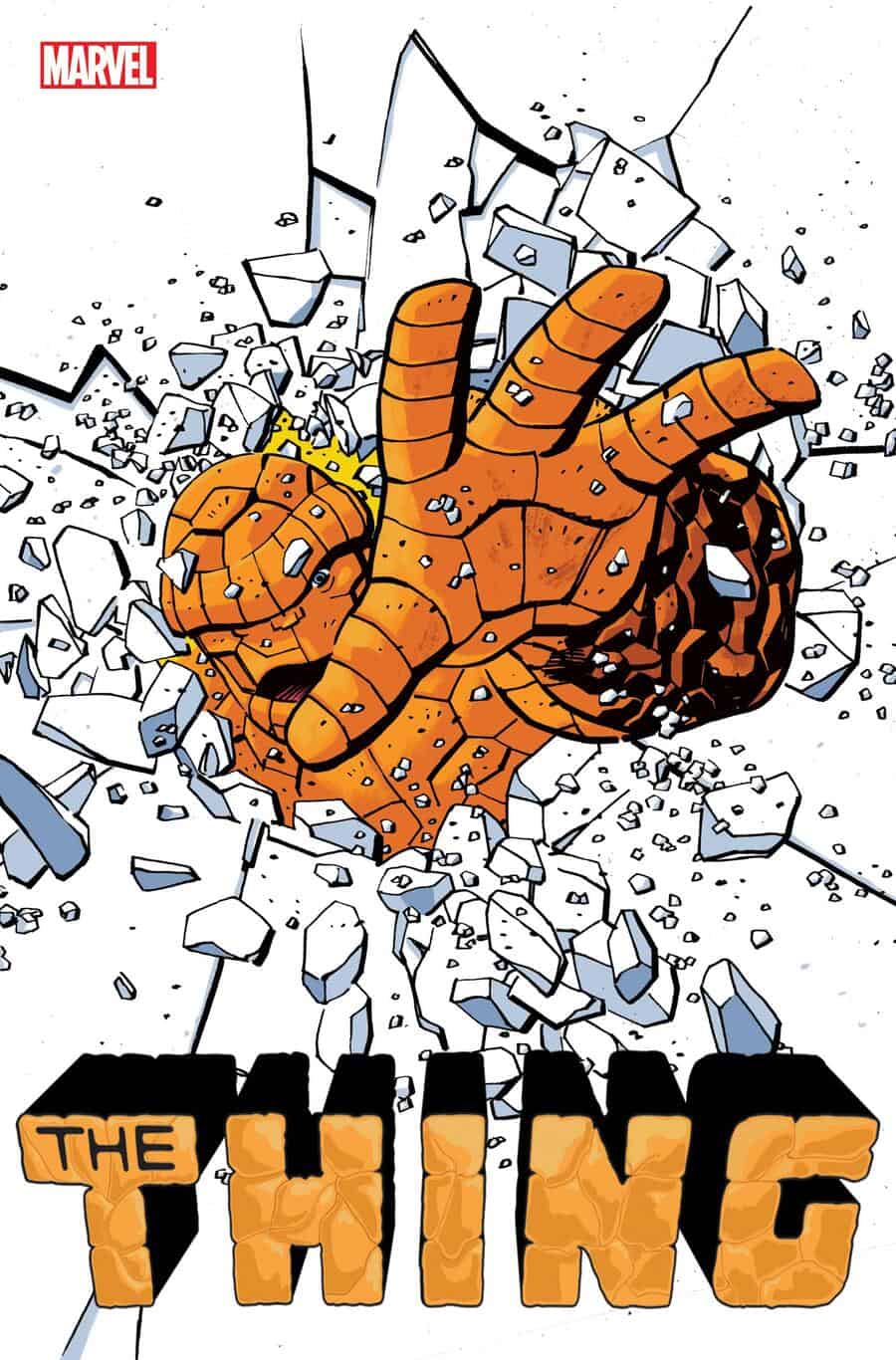 Aunt Petunia's favorite nephew, the ever-lovin' blue-eyed Thing, is a lot of things: man, monster, hero, pilot, friend, lover, idol of millions. But one thing he rarely is: content. Forever trapped in his rocky form, he knows he will always be alone, no matter how many people say they care for him.

Now, a force from beyond is using that loneliness for its own ends -- and the repercussions might be far greater than anyone could have imagined.

There was a time, before Wolverine and the Punisher’s popularity soared in the ’80s, when The Thing was considered to be Marvel’s resident bad boy. The Fantastic Four’s most popular character, by the 1970s Benjamin J. Grimm was catapulted to solo (-ish) stardom in Marvel Two-in-One, and later, his own solo comic. Beyond his outsized personality, The Thing’s versatility is his secret weapon: as a brawler in the “monster with a heart of gold” archetype, writers could more or less work him into any type of story they wanted and it would still work. Sci-fi? Mysticism? Mystery? Romance? The Thing is uniquely suited among Marvel’s elite to be able to fit seamlessly into any story mold needed because he’s such a well-crafted character that doesn’t have some of the inherent limitations imposed on him that, say, Spider-Man does. Beyond Spidey, he may just be the best character to come out of the House of Ideas’ ’60s renaissance.

But time and its vagaries do funny things in popular culture. What seems like a no-brainer one decade feels passé the next. Comics changed during the ’80s, and evolving tastes and fads seemed to render the once-unstoppable Thing cold in his tracks. After a moderately-successful title run, the character’s solo exploits abruptly came to an end, and he was folded back into the mainline FF book while Wolverine, Punisher, Ghost Rider, the X-Men, and whole lotta ninjas took center stage. Dan Slott, in a spiritual precursor to his current FF run, tried and ultimately came up short in gaining traction with a new solo series in the mid-’00s; despite its spot-on character work and absurdly fun plots, the series failed to resonate with readers and was unceremoneously axed after a mere eight issues. (Go support your LCS and buy those eight issues out of the back issue bins. They’re cheap and amazing. You can thank me later.) Time, it would seem, was no longer on Ben Grimm’s side, and his adventures were kept strictly to the Fantastic Four (and weirdly, New Avengers for a brief time in a very much “why the hell not?” sense).

Novelist Walter Mosley knows better, though. He knows The Thing is a star, and in this miniseries, aims to highlight not only that fact, but why Thing still resonates six decades later.

Mosley is making his maiden voyage into comics writing, but you’d be forgiven for thinking he’s a seasoned pro. Mosley’s script hits is story beats with a precision and efficiency typically reserved for those who have been at it for years at a time. Not a panel is wasted, and even completely silent scenes are shockingly well-communicated and choreographed. Part of that is undoubtedly the artistic assist from up-and-comer Tom Reilly, not to mention the always-cherished colors by Jordie Bellaire (who seems to color at least half the comics being published today and never misses a step) — but that only gets you so far. Creating comics is a team effort, and if any one member of the team falls short, the other members can do their best but the gap will be evident in some way regardless.

Mosley very, very clearly understands what makes The Thing tick. He understands that underneath his literal exterior shell and bravado, Ben Grimm is a man in pain, forever isolated even from the closest people around him. Sometimes that makes him lash out or act the fool, but it is always present even on his best days. The Thing will always be a monster on the outside as far as his self-image is concerned, which in turn is echoed in his self-worth. That’s reflected throughout Mosley’s script, which keenly hones in on Ben’s struggle with self-esteem, even pivoting a key plot point around it to catapult the narrative forward.

Mosley also clearly loves the Marvel Universe, and isn’t shy about casually dropping its other inhabitants into Ben’s story. Hercules shows up for an extended cameo (much in the same manner he or any other character might have back in the Jack and Stan days, in that he isn’t really part of the story but rather a passer-by whose presence reminds us that this world is deeply interconnected), and the general dynamics of how the Marvel Universe functions and relates to its heroes and villains as “the world just outside your window” is on full display. When The Thing is at one point felled by a particularly strong variety of mace (the spray kind, not the whomping kind),he  sends a car flying in a pained rage, and is then accosted by the police with familiarity as “Mr. Grimm.” This casualness instantly communicates the relationship the Thing and by extension the FF and other heroes in a grounded way that is completely in sync with the foundational dynamics of the Marvel Universe.

Tom Reilly’s art brings to mind Chris Samnee, and that is no small comparison. Reilly’s work has a deceptively simplistic line that communicates volumes. He could also be favorably compared to Michael Cho, in that he is able to translate the essence of a character in a relatively small amount of lines. His big, bold inks bring a sense of strength and bombast to each of his characters, which is a perfect look for The Thing: 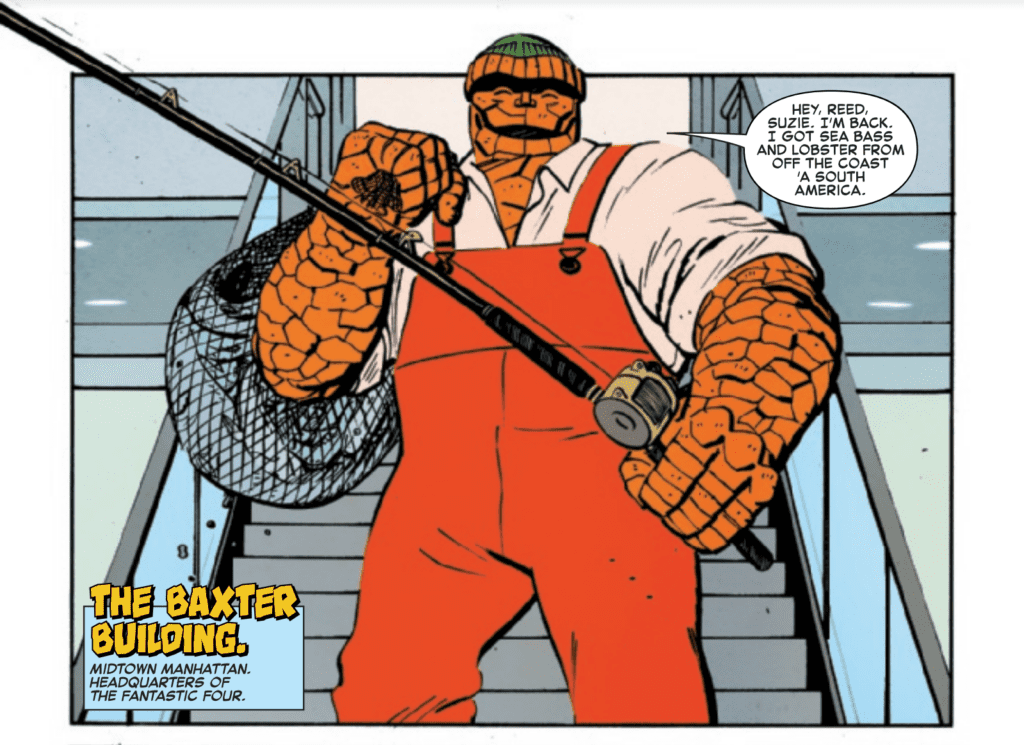 Then just a few pages later, he effortlessly communicates Ben’s loneliness and isolation: 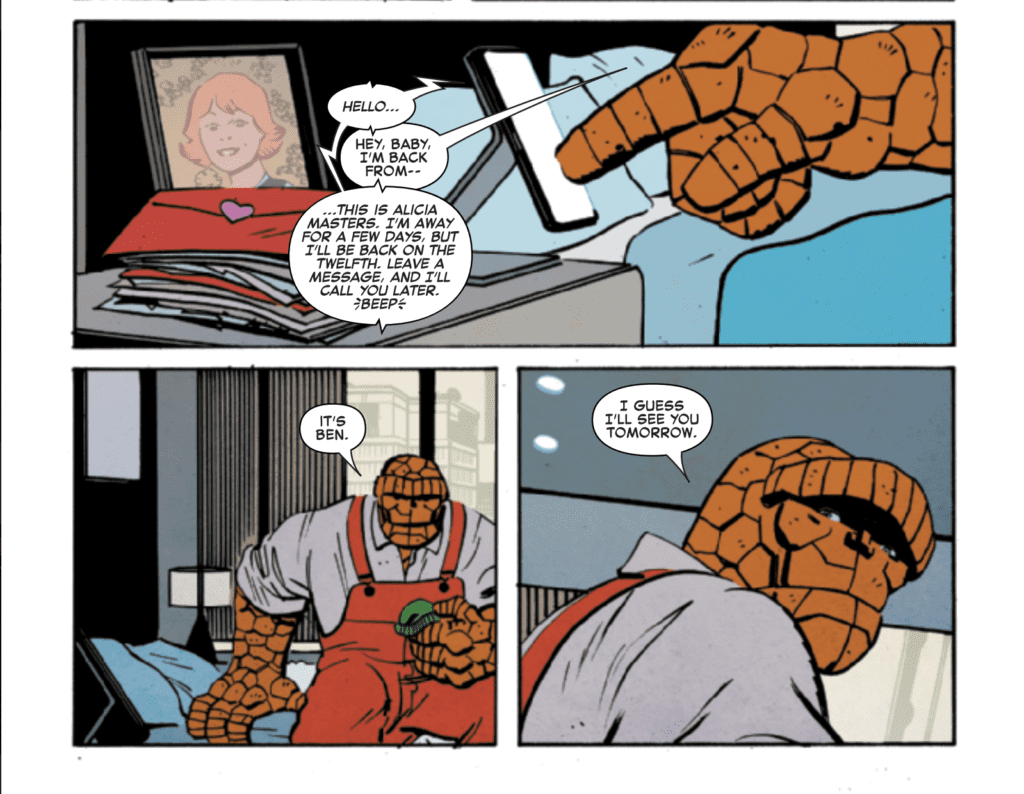 And then, finally, his raw power, even as he’s reeling: 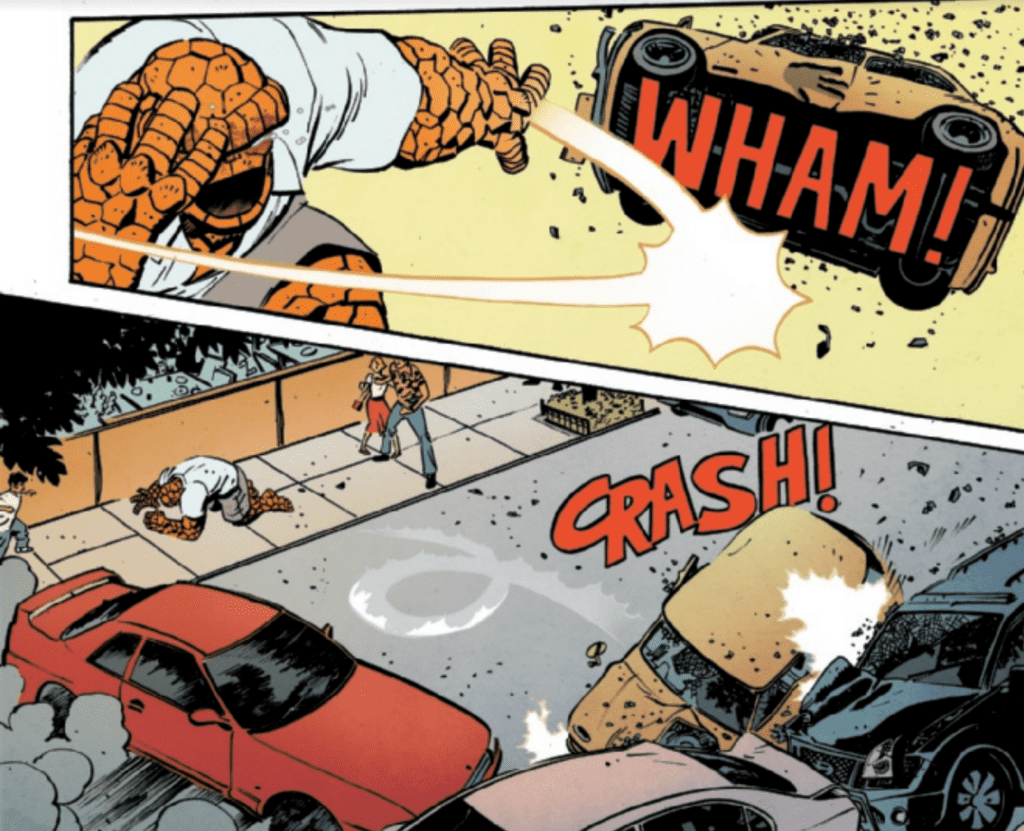 All of that is actual character work on display through art. Three different sides of the Thing, communicated to readers effortlessly and even naturally. We see him as a multifaceted human being, not just the subject of a pin-up or standing around doing nothing or posing for no reason. Reilly may be a newer talent, but mark my words, he’s poised to blow up big sooner rather than later.

My only real qualm with The Thing #1 is that the disparate pieces of the puzzle are still somewhat obscured from how they all fit together. Which is the essence of a mystery, or any good story in its first chapter — really, what it means is that I’m sad I didn’t get more. Call me greedy, call me selfish, but I simply don’t want to have to wait another month to find out what happens next. But rest assured, when issue two ships, it will be right on the top of my reading pile.

And when you’re talking about a hero as awesome as The Thing, that’s exactly the way it should be.

The Thing #1 is a pleasant surprise, hitting all the right notes for a character with a storied history who has plenty more stories left to star in. Marvel has been on a role this year with their miniseries (Beta Ray Bill, Black Knight, Ka-Zar, Kang, and U.S.Agent have all starred in can't-miss stories), and it's only fitting that the ever-lovin' blue-eyed Thing would follow suit. After all, he's one of Marvel's greatest creations. He's a star, and should always be given first-tier treatment. And in the hands of this creative team, he's bestowed just that.

ADVANCED REVIEW: The Thing #1: It Ain’t Easy Being Orange