ADVANCED REVIEW! Thor #24: A Blast from the Past (Spoiler-Free!) 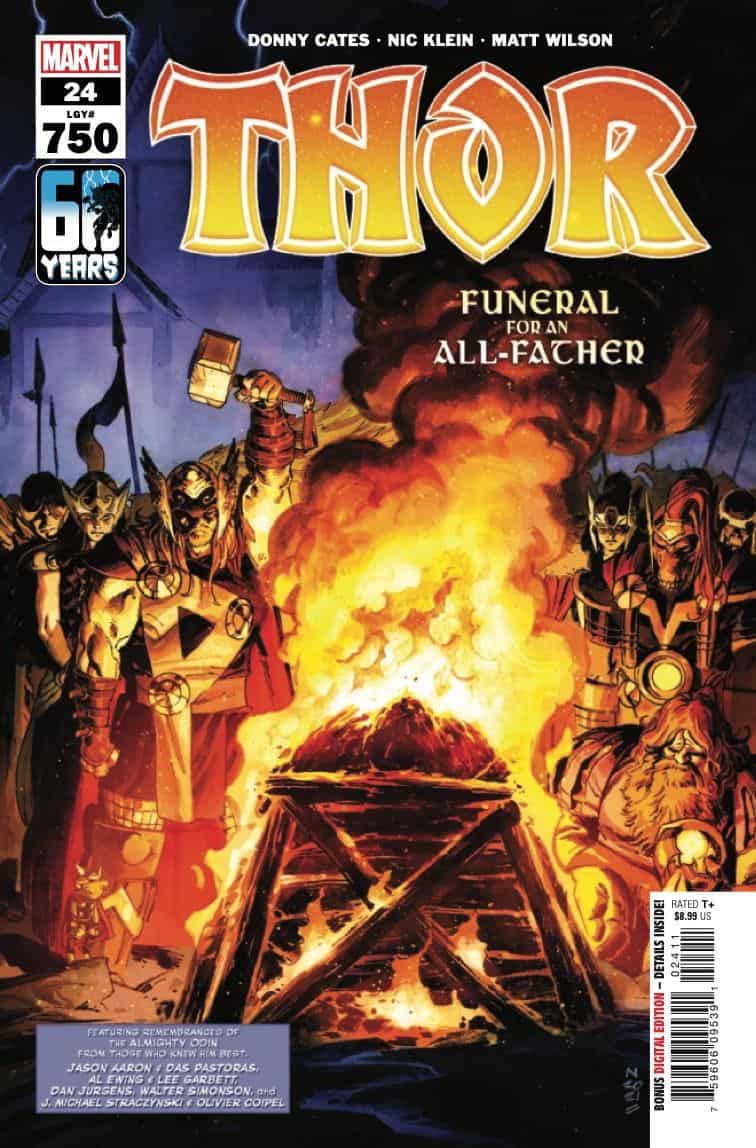 After a scorched-earth victory against the God of Hammers, Thor and all of Asgard reel from a brutal loss. But some people are never truly gone, and as Thor and his allies come together so will fan-favorite creators from throughout Thor's history.

To celebrate sixty years and 750 issues of Thor, Marvel assembles an impressive collection of former Thor (and Loki) creatives for this hefty anthology-style special issue. While Disney (and Marvel by proxy) is infamous for its nostalgia-based marketing, there’s no denying that reading Thor #24 feels a bit like looking at an old photo album and hearing new stories about people you’ve known for ages.

A story by Thor’s current creative team,“The Second Son of Asgard” acts as a framing device for the rest of the anthology. Taking place at Odin’s funeral, Thor reads from a book called The Book of Kings, which Cates’ narrative implies contains the other short stories. While this framing device falls apart under scrutiny, Klein’s grungy artwork and Wilson’s somber colors do a solid job of setting the mood and the comic’s finale has an interesting cliffhanger sure to bring readers back. Working its way through Thor creatives chronologically, the anthology begins with a Beta Ray Bill prequel story by 1980s Thor artist/writer/powerhouse Walter Simonson. John Workman’s lettering stands out as the only traditional letterer in the anthology and his presence feels crucial in capturing the original magic of 80s-era Thor. Unfortunately, while colorists Laura Martin and Matt Milla are talented, their work in this particular short — soft-shaded digital color — feels jarring and muddy, especially when compared to the flat colors of Simonson’s older work. That said, with a unique approach to composition and energetic artwork, Simonson’s work remains a delight to read. While Thor’s 90s maximalist costume may feel a little silly to the modern eye, there’s no question that Jurgens like Simonson is a talented artist/writer with a keen eye for composition and energetic action sequences. Wilson, who also colors the current Thor run, shows his flexibility as a colorist, giving Jurgens’ work a vibrant palette and simplified shading, which feels better suited to Jurgens’ cartooning and also gives the story a playful edge.

A dramatic shift in both mood and scope, “Benedictions” is an intimate, dimly lit tableau showing Thor as he contemplates his own death and draws up a will with an American lawyer. In comparison to previous stories, it feels far more character-driven and grounded, with Sánchez golden candlelight adding a haunting quality to Coipel’s stoic figures. Coming next (ha!), “What Comes Next” focuses on Thor’s sibling Loki rather than Thor and sees the return of the creative team of Loki: Agent of Asgard (Ewing, Garbett, and Fabela) and sets up Loki as part of Ewing’s forthcoming Defenders Beyond. Delicately balancing sentimentality with fears and hopes of what the future holds, “What Comes Next?” is an outstanding story that’s not only visually charming but character-driven and emotionally expansive. Seeing Loki’s genderfluidity lovingly shown and addressed on the page again is simultaneously heart-filling and heartbreaking, as it becomes a reminder how comics including the current Thor run continue to erase/ignore an important part of the character to queer readers (like me).

The final story in the anthology, “Who Wields Who?” is told from the perspective of Mjolnir (who has more lines than most female characters in the entire anthology) and asks if it’s possible Mjolnir is truly the one in control. While Jason Aaron left Thor only a couple of years ago, there will no doubt be fans happy to read his interpretation of the character again. Das Pastoras’ artwork is the polar opposite of both Simonson and Jurgens, depicting desaturated, grisly scenes, with highly rendered figures. While all are certainly good in their own right, it’s nonetheless fascinating to see the changes in Thor’s artwork over time. While reading Thor #24 can feel like a walk down memory lane, it also pulls a troubling trend into stark contrast: the general absence of women and other marginalized genders in both hiring and on-page representation. There are more than twenty creatives working on this anthology, but only three (including two editors) are not men. While Marvel at large does hire women and nonbinary people, this Thor overview of sorts does act as a reminder which creatives are given control of larger titles. In terms of on-page representation, women and queer people are startlingly absent with the exception of Loki. Over the course of approximately seventy pages, Angela (also one of Odin’s children, Thor’s sister, and lesbian) says nothing and the same can be said for Freyja (Odin’s wife) and Jane Foster’s Thor. While this anthology is a wonderful look at where Thor has been and the creatives who brought him here, it’s also worth taking it as an opportunity to consider how far Thor has left to go.

Showcasing decades of talented writers and artists, Thor #24 is a beautiful and broad-ranging retrospective. It's a nostalgic look at where the God of Thunder has been and where Marvel may take him (and us) in the future.

ADVANCED REVIEW! Thor #24: A Blast from the Past (Spoiler-Free!)