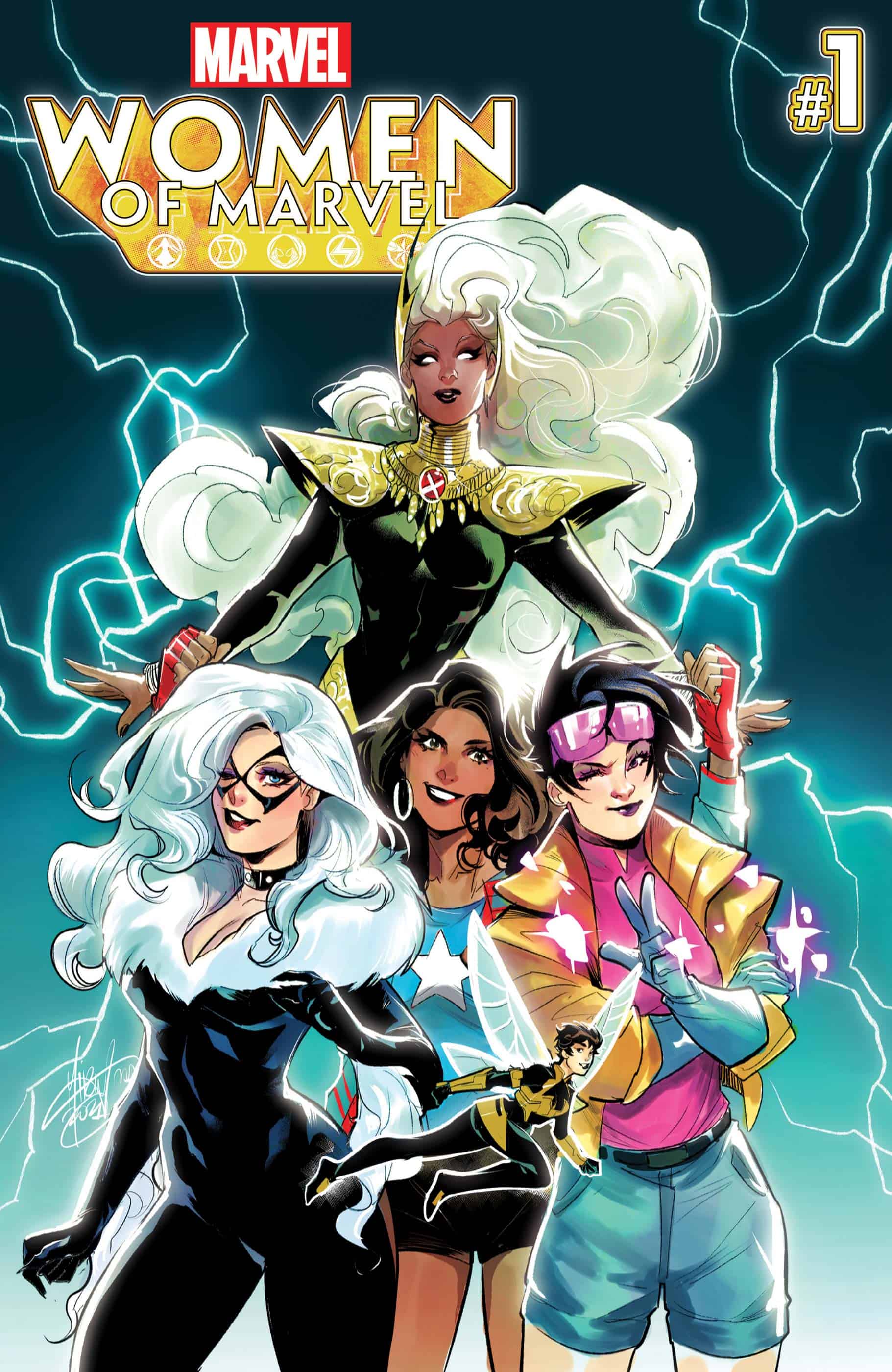 CELEBRATE THE PHENOMENAL WOMEN OF MARVEL WITH TALES SPUN FROM THE GREATEST MINDS IN COMICS! The talented women creators who have made Marvel the powerhouse that it is take on fan-favorite female characters within the Marvel Universe. From seasoned veterans to up-and-coming talent, this cast of writers and artists gives their own spin on beloved heroines, showing the fire, mystery, grace and joy that makes them phenomenal women. With superstar creators Charlie Jane Anders, Mirka Andolfo, Jordie Bellaire and many more, this issue is another must-have from the Voices pull list!

March is Women’s History Month, so let’s celebrate with some of Marvel’s greatest female superheroes and the talent behind them. Let me just say I am thrilled that Marvel continues to publish these anthology books spotlighting marginalized groups. I’m a lifelong superfan of female characters, so it’s truly an honor to present the advanced (and spoiler-free!) review of this year’s Women of Marvel #1!

The issue opens with the contributors of this anthology (and Gail Simone) giving quick blurbs about the characters that have inspired them. I was pleasantly surprised that not all of the creators picked Marvel characters (one even picks The Baby-Sitters Club, a series near and dear to my own heart). It was great seeing different inspirations from across all eras. I’ve also been greatly inspired by several female characters, from Wonder Woman to Sailor Moon to Xena. The list goes on, and I’ve always been pulled towards female characters in the otherwise male-dominated media I’ve consumed as a child. But enough about me, let’s get to the stories!

“Four Jobs Felicia Hated and One She Didn’t” by Preeti Chhibber, Ann Maulina, Rachelle Rosenberg, Eleonora Carlini, Claire Roe, Jen Bartel, Marguerite Sauvage
Black Cat stars in these one-page snippets throughout the issue. They’re basically snapshots at various points in time during her career as a thief. I’ve always been a Black Cat fan so I found these really fun, but they’re hard to rate because of their brevity, so I’ll abstain with this one. 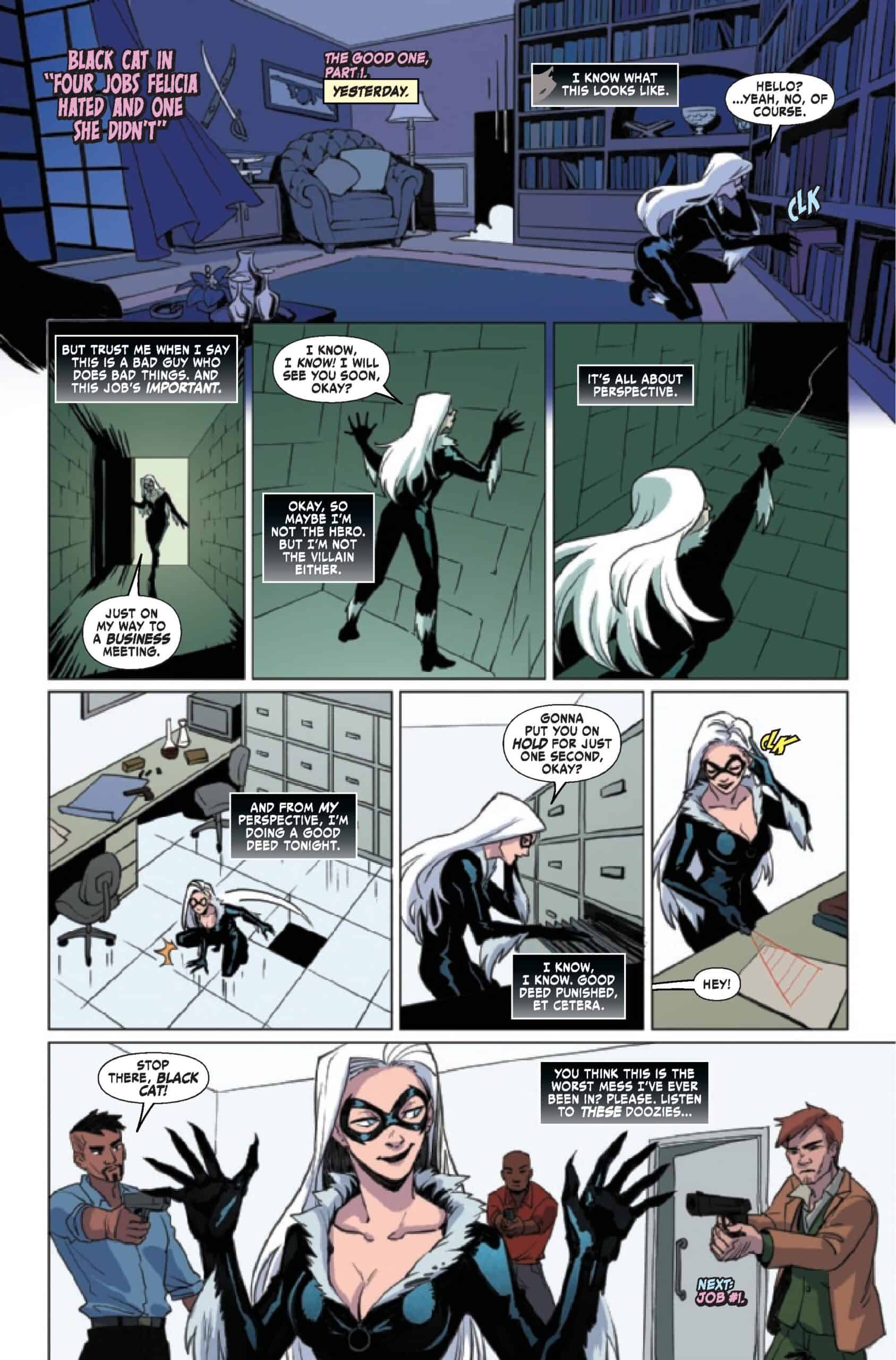 “Real Witches” by Mirka Andolfo, Sumeyye Kesgin and Brittany Peer
A cute little story about young Patty Prue, a college student who struggles to let people get close to her. Patty is obsessed with witches (aren’t we all?) and eventually meets the titular “real” witch. It felt a little bit like The Craft, though I wish there was a bit more humor or fun incorporated into the story. Still, I like stories that feature civilians when they encounter superheroes and supervillains, and I very much enjoyed the art by Sumeyye Kesgin. There’s also a seldom-used villain appearance which always makes me happy.

“Showing Up” by Jordie Bellaire and Zoe Thorogood
I have very little knowledge about Jessica Jones other than what I’ve seen from the first two seasons of her Netflix series (which was very good, particularly season one). The comic version never really caught on for me for whatever reason. But this story felt very much like a scene from the Netflix series. There’s a sardonic tone while Jessica still remains a hero which I really dig. The pencils and inks by Zoe Thorogood are fantastic, elevated further by the always-amazing Jordie Bellaire. Eight pages is not much time to tell a story, but this one had me hooked.

“Comb Foot” by Charlie Jane Anders, Emma Kubert, Elisabetta D’Amico and Giada Marchisio
A team-up between Squirrel Girl and Black Widow is not one that I pictured happening. I like both characters (though I’m going to pull the hipster card and say Squirrel Girl was better when she wasn’t overused and was a member of the stellar Great Lakes Avengers team), but an odder coupling I’ve not seen. Well, maybe that time Squirrel Girl and Wolverine hooked up. I digress… I wasn’t very fond of this story by Charlie Jane Anders. It was bonkers and very much in the tone of the more recent Squirrel Girl stuff. I also DESPISE when writers go out of their way to make fun of a longtime supervillain’s codename. It’s a pet peeve of mine, and it happens here with a surprise (yet fun) villain. The art by Emma Kubert was quite good, however. There’s a cartoonish charm to it that will surely make it popular with a younger audience, one that I’m not a part of anymore. And that’s okay.

“Cry of the Jungle” by Rhianna Pratchett, Alina Erofeeva and Ruth Redmond
When I got to this point in the anthology, I thought to myself, “I wish there was just a fun classic superhero adventure story here.” Well, my prayers were answered with this final entry into the anthology! This one’s a team-up between Shanna the She-Devil and Silver Sable in the Savage Land. The Savage Land is one of my favorite locations in the Marvel Universe, so I’m always delighted to revisit it. Silver Sable is a character I’ve always had a passing interest in largely due to her amazing character design (and I adored her 90’s action figure until her arms fell off). Shanna, however, I’m not overly familiar with. I was a little taken aback that Shanna wasn’t wearing her iconic cavewoman outfit, but I’m guessing it was too revealing for 2022 standards. Still, an updated take on that look would’ve been fun.

I hope Women of Marvel continues to be an annual celebration so we'll continue to get stories about female heroes by female creators. This one is a mixed bag of successes, but definitely worth a read if you're a fan of Marvel's cast of female heroes. I do wish the cover reflected the characters inside, or vice versa (would've loved to see a Storm or Wasp story), but casual fans will catch glimpses of characters like Silver Sable or Shanna the She-Devil that they might not know.