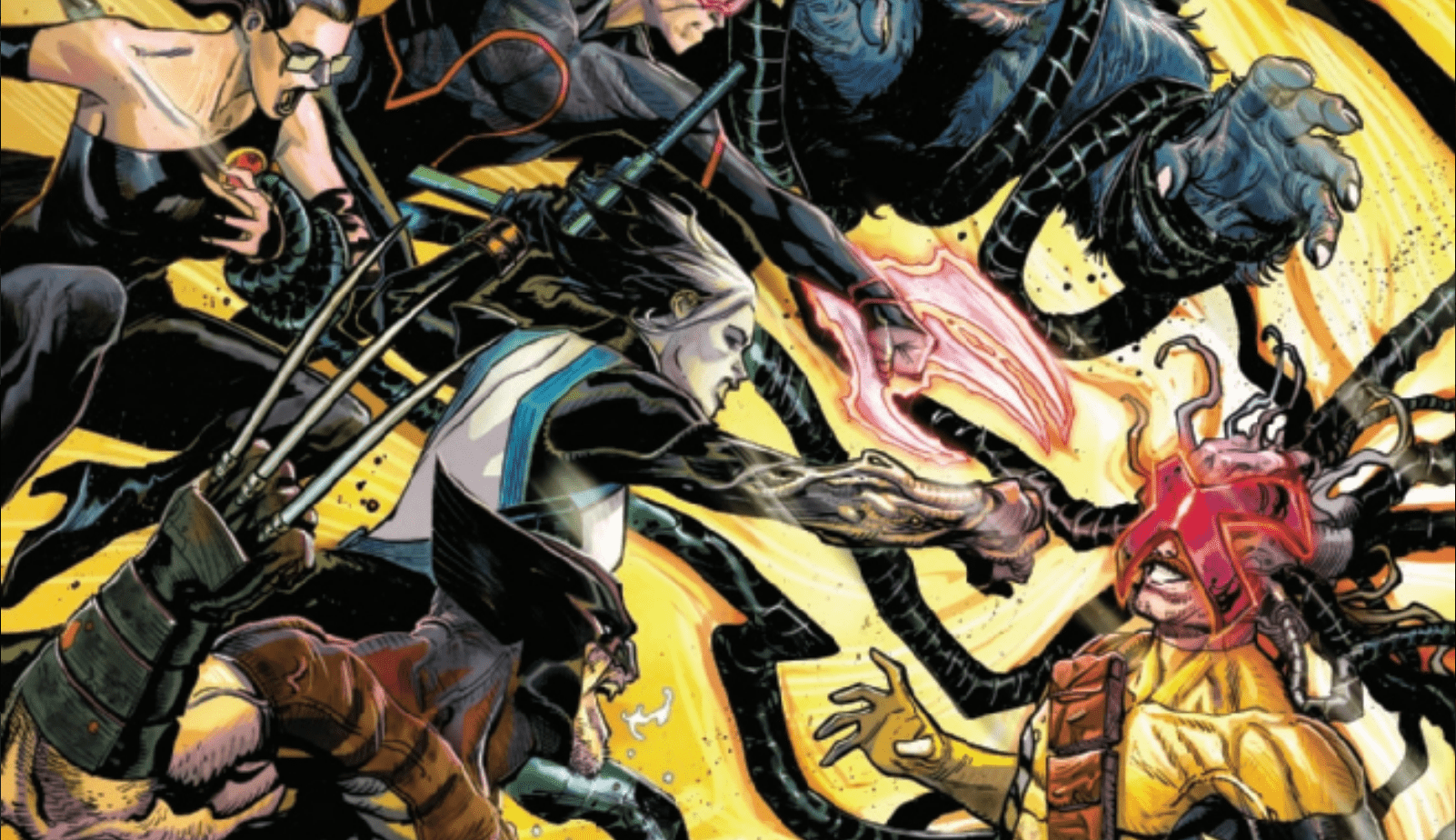 X Lives... X Deaths... OVER! The future is NOW! Charles Xavier recently made the unprecedented move to backup ALL of Krakoa's Cerebro helmets with his own to aid Logan in the past. But coalescing that sort of power isn't without consequence...

Meanwhile, the question before X-Force - and the Quiet Council - is, what to do with Omega Red?

Under Benjamin Percy’s watchful, deliberate, and painstaking eye, X-Force continues to be the crown jewel of Marvel’s current crop of X-books. If you thought the book would change at all during Destiny of X, forget it: if anything, it’s an even stronger, bolder book than ever; stridently taking aim at the morality of “the ends justify the means” morality and all it entails.

X-Force #27 acts as both an epilogue to X Lives of Wolverine and a continuation of the Omega Red/Russia/Mikhail Rasputin subplot, threading all three together in a gnarly little bow made out of blood and bone and gristle. Logan actually takes a backseat, though, as the true storytelling engine is the ethical rift between Beast and Sage over what the former did to Omega Red upon his resurrection, which unwittingly set the events of X Lives into motion. Beast, for his part, has been an absolute bastard throughout this series, and this issue comes this close to seeing him take that final step into full-on Dark Beast mode. The only thing missing is the cackling eugenicist, but that job field could absolutely be swapped for cynical, shadow-drenched Cigarette-Smoking Man from X-Files and the personality could still work. Some fans may lament the loss of Beast’s innocence in recent years and pine for the jokey Hank McCoy of old, but truthfully, his slow slide into something akin to outright villainy has been one of the X-Men’s most quietly compelling subplots in years.

This issue of X-Force has no shortage of the book’s usual international intrigue to go along with its thorny ethical questions. The specter of Mikhail Rasputin and the Russian threat still loom (unfortunately, this is far more timely than Percy could have ever conceived when he starting working on this plot), but more urgently, the fallout of Xavier’s decision to route all Cerebro backups through his personal helmet – a dangerously hubristic move – becomes known in a rather lethal manner. This being superhero comics, our ostensible heroes barely get a moment to catch their collective breath before the next threat rears its ugly head. Percy, for his part, does an impeccable job of rendering this new threat with a high sense of potency; we don’t know much about it, but it makes an opening statement right off the bat that is brutally efficient and effective. Bravo to the author for not being shy about upping the ante.

Robert Gill and Guru-eFX are on art duties, and X-Force continues to be one of Marvel’s most consistently gorgeous books in their stable. Gill joined the book only a few issues back, only to have the rug pulled out from under him when the book went on a three-month hiatus during X Lives/Deaths. Now that he’s back, though, he’s back with a vengeance. His style may be a tad less polished than some of his predecessors, but there’s no denying he’s the right guy for the job, especially with Guru-eFX’s lush, painterly colors. Gill’s pencils and inks are the type that at least at first come across as workmanlike, until the smaller details begin to reveal themselves, then boom, you realize you’re looking at a future superstar.

X-Force #27 continues the book's strong streak, hammering home thorny ethical dilemmas right out of the gate and not losing a step after its brief hiatus.