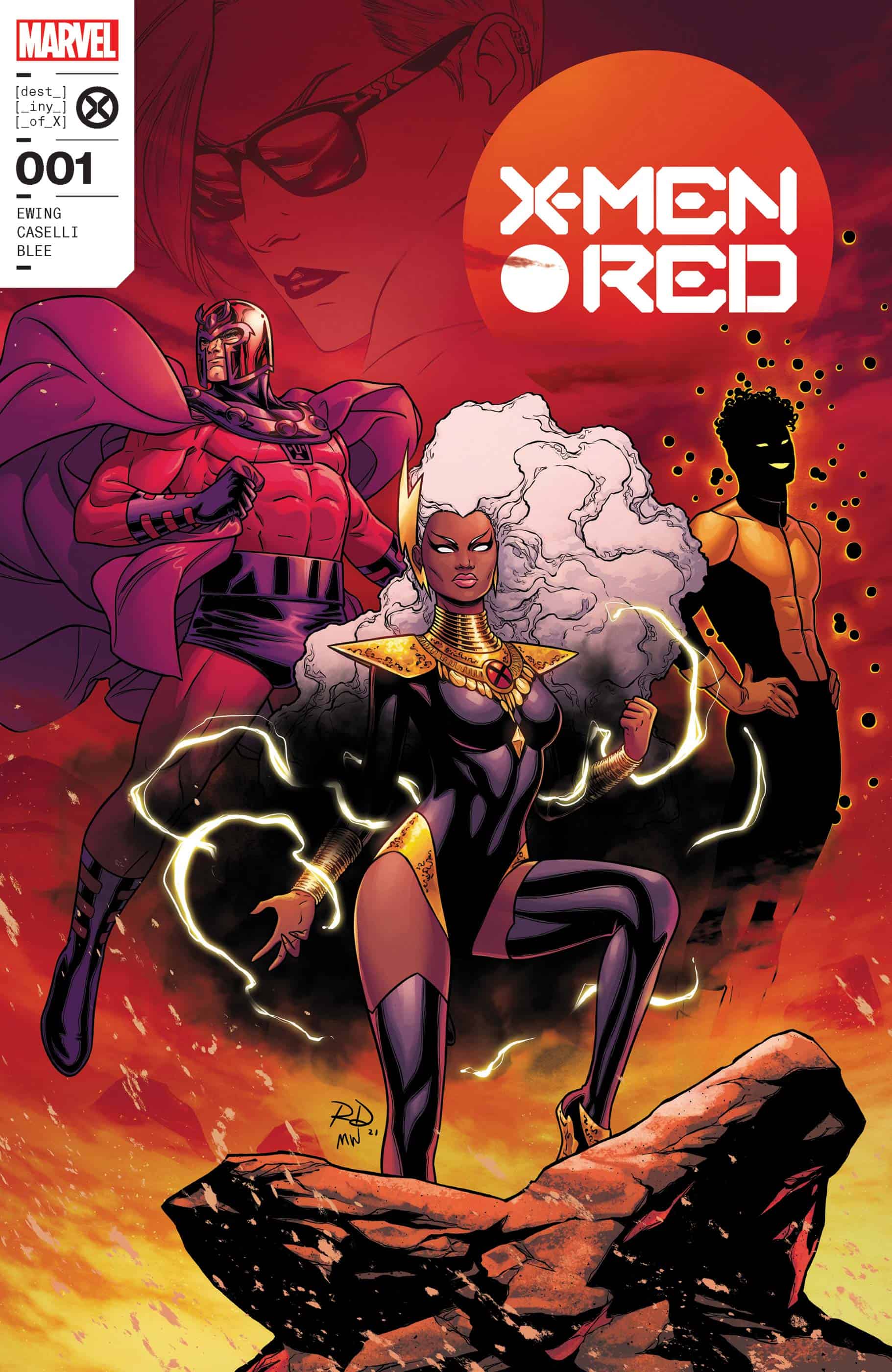 Mars is now ARRAKO, terraformed, habitable, and the crown jewel of the new mutant empire. Ororo Munroe, STORM, is the Regent of Sol. Arrako is home to both Earth-born mutants and those from Amenth, which is causing considerable friction between the two very, very different cultures. But what Arrako needs isn't a queen, or even a regent. It needs X-Men... and their destiny is NOW!

X-Men Red #1 is one of the most auspicious debuts so far this year, and proves that Marvel’s X-department doesn’t need Jonathan Hickman around anymore to take the seeds he planted and run absolutely nuts with them. Growing out of the events of last year’s Planet-Size X-Men one-shot, Red is an organic outgrowth of a mutant world that is fundamentally changed. It’s been said before many a time during the last couple of years, but there’s no way for the X-Men to credibly go back to their basics as a secret mutant school after the events since HOX/POX. And thankfully, Marvel didn’t get cold feet after Hickman departed after Inferno and contrive some nonsensical way to force the genie back into the bottle – instead, they’re leaning harder than ever into the new status quo that is redefining wholesale who and what the X-Men are in the 21st century.

That said, X-Men Red has a ton of backstory feeding into it, so it isn’t exactly the most new reader-friendly comic around. However, the fact that it isn’t spoon-feeding information through overwrought narration or exposition plays to the strengths of writer Al Ewing’s story: this is world-building. Dense, highly contextualized, and almost daunting in scope, X-Men Red #1 is not a comic for X-beginners. But it is a reward for fans who have stuck through the last three years of X-Men comics, watching and waiting for the long-term payoffs to eventually play out. And with this issue, a multitude of subplots begin to converge in the best ways possible: leftovers from Ewing’s S.W.O.R.D. run; the ongoing détente and uncomfortable relationship between Earth- and Amenth-born mutants; Magneto’s existential crisis now that mutantkind has achieved everything he ever desired; Sunspot’s constant ennui; John Proudstar’s recent resurrection; Storm’s ascension to being the queen (sorry, regent) she’s always been destined to become. And, for an added x-factor (sorry for the wordplay), Vulcan running around being an ass.

But as the cover art implies, Storm is the major focus here. As well she should be. As Regent of Arrako, she’s practically and symbolically at the center of the budding Arrakan culture, but more importantly, she’s Storm, dammit, and deserves the spotlight. Storm has been in a near-constant state of being shoved to the background of the X-Men’s world for most of the 21st century so far; writers have been more content to focus on more or less anyone else. But Ororo isn’t just one of the most historically important female characters in x-canon, she’s also one of the strongest, fiercest female characters at Marvel, period. That matters. This is a woman who was once worshipped as a living goddess, and has a presence when she enters a room that always speaks to that. Ororo Munroe doesn’t enter a room; the room comes to her. She has a presence, striking in its gorgeousness but more importantly firm in its authority. She speaks with that authority, too; she isn’t just plain folks. It’s been an ongoing shame that so few writers in the past two decades have been able to figure out what to do with her, but here, now, at last, Al Ewing is giving Storm the moment in the spotlight she’s always deserved. Bravo.

Ewing could not have asked for a better artistic partner than Stefano Caselli for this debut comic. Caselli has a style that straddles the line between cartoony and not; detailed and smooth; awesome and even more awesome. This guy has been consistently killing it in everything he does from the word go, and X-Men Red is no different. His Arrako is lush and overflowing with life and its various itinerate buzzings; the mutants populating it are all distinct, with clearly visible inner lives and emotions. That is to say: all of his characters actually look like individuals, rather than carbon-copy duplicates. He’s also a master of rendering body language, especially when it comes to communicating anything unsaid. Sunspot, especially, benefits from this copious understanding of blocking and posture: Caselli’s Roberto is just a little off his game, twisting in the wind a bit, knowing he wants a new adventure but not sure which way to jump quite yet.

That is a lot to communicate visually, and a huge ask of any artist. But Stefano Caselli is more than up to the task, and is frankly a modern master of comics storytelling. He certainly benefits from having the great Federico Blee coloring him; Caselli’s work on its own terms is “10/10 would recommend,” but a striking colorist always elevates him to the next level. Blee is that colorist, and in his hands, what was already a jaw-droppingly gorgeous book in both conceit and execution is taken to the next level. Combined with Ariana Maher’s flawless lettering, X-Men Red #1 concludes with a dynamite moment that is the capper to a perfect comic.

X-Men Red #1 may not be the most accessible to new readers, but don't be scared. This is a perfect comic that should not - nay, CANNOT, be ignored.