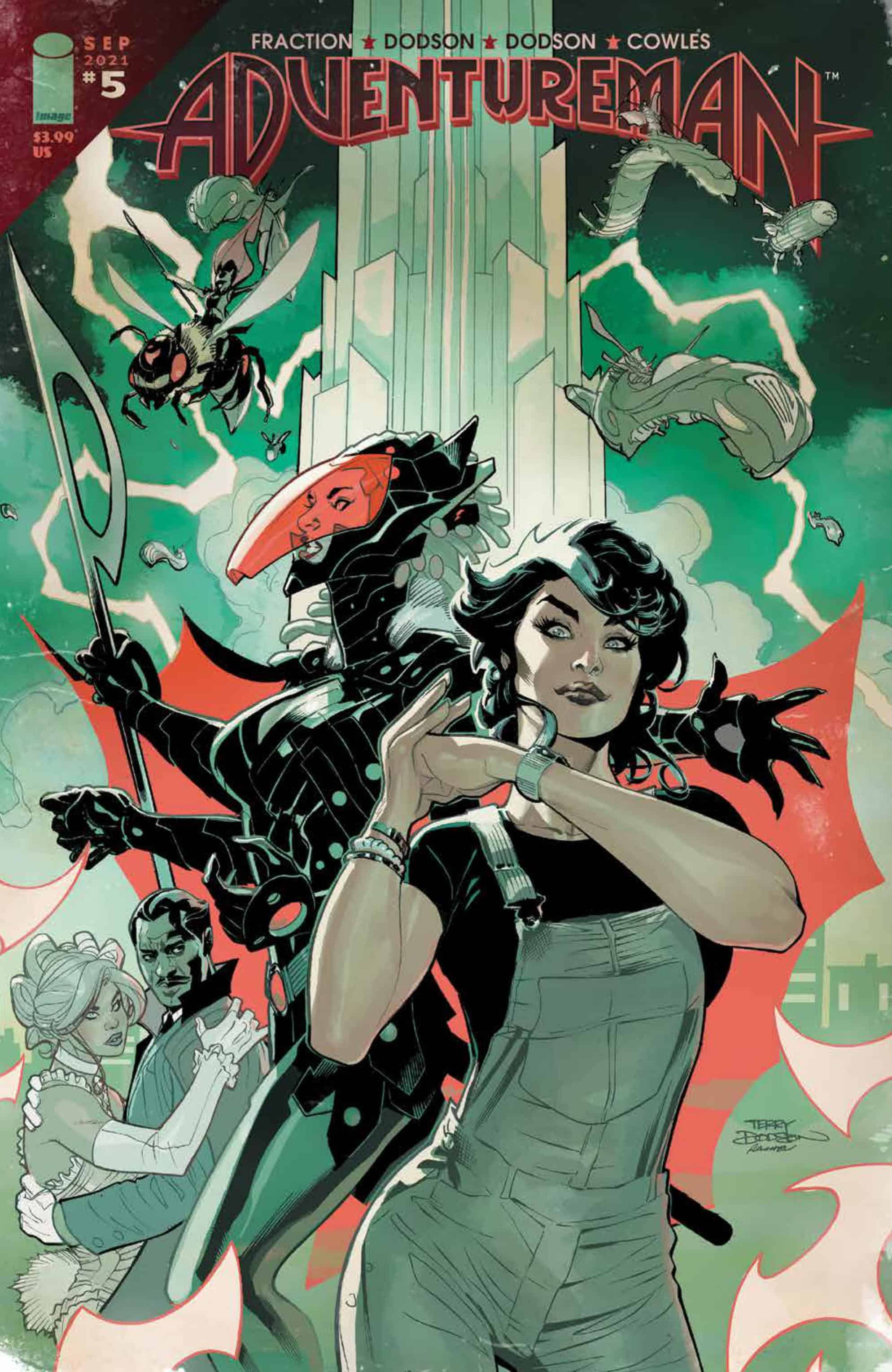 "TO THE GREATEST UNKNOWN"
As New York City teeters on the brink of a strange armageddon, Claire tries the Adventureman mantle on for size just in time to face the monstrous evil that vanquished her predecessor—only he didn't have a family like hers.

Serialized storytelling, across all mediums, but specifically in comics, has moved to the arc or trade model. It makes sense, write 5-6 issues that seamlessly tie together to tell a cohesive story month to month, and then release it in a collection that binds the larger story together. Due to that trend in comics, it’s always a little jarring, and exhilarating, to see a book choose to do something different. This is the case for Matt Fraction, Terry and Rachel Dodson, and Clayton Cowles returning Image series, Adventureman.

Adventureman #5 picks right up where the last collection ends, with the powered-up Baroness Bizarre unleashing terrors on New York City. As nightmares and a range of mechanized monsters plague the city, Claire and the recently resurrected members of team Adventure try to contain and defeat the Baroness. The issue continues the pattern of intersecting the modern story with the life of the pulp heroes from a time before they were forgotten, and Phantom continues to serve as the story’s P.O.V.

The issue’s script is tight as ever, with the Fraction fun in full force. Just reading the book makes it easy to slip into that old-school, alliterative mindset. This is a series that feels like every page, every panel is used to maximum efficiency, with no wasted pages. It makes the reading experience sail by and honors the tradition of the medium of stories it’s trying to encapsulate and homage. It’s been long enough between arcs that you’ll probably have to go back and reread the first collection (which feels intentional, if the notes at the end of the book are to be believed).

The Dodsons kill it as usual. The action is great but character expressions are still by far the best part of the book. Phantoms expressions in flashback are a true highlight, something simple like eating an apple is rendered perfectly. It goes to say that the pencils, inks, and colors all blend masterfully, in such a way that can only be achieved by a team working together for a consistent amount of time. The Dodsons know exactly when to trade-off and the inks emphasize one image on-page, while in the next panel, the colors might be the focal point. That balance is a masterclass in sequential art, and it’s impossible to imagine another pair trying to synchronize their art in the way that this book does.

While the script and art play and build off each other in compelling ways, the lettering is still this book’s secret weapon. The slight opacity in the Phantom’s speech bubbles, the font of the narration feeling like pages fresh off the typewriter, and the perfect execution of bold makes the words pop and sing, matching the beautiful art of the Dodsons. It’s an example of the Letterer knowing exactly what each line of words needed and how to convey it to fight the wide variety of character design and archetypes. It’s no surprise that Cowles won last year’s Lettering Eisner for this book, and hopefully, that recognition will extend into the years that this book continues to run.

If Adventureman slipped your radar in its initial run or the time spanning between collections, do yourself a favor and rectify that immediately. Coming back swinging, the book is the type of comic the industry sees every once in a couple of years. With dizzying continuity, a metatextual premise that could only work in sequential storytelling, and a perfect synergy between art and lettering, Adventureman might just be the best Fraction book to date. This is saying something when looking at Fraction’s massive body of work.