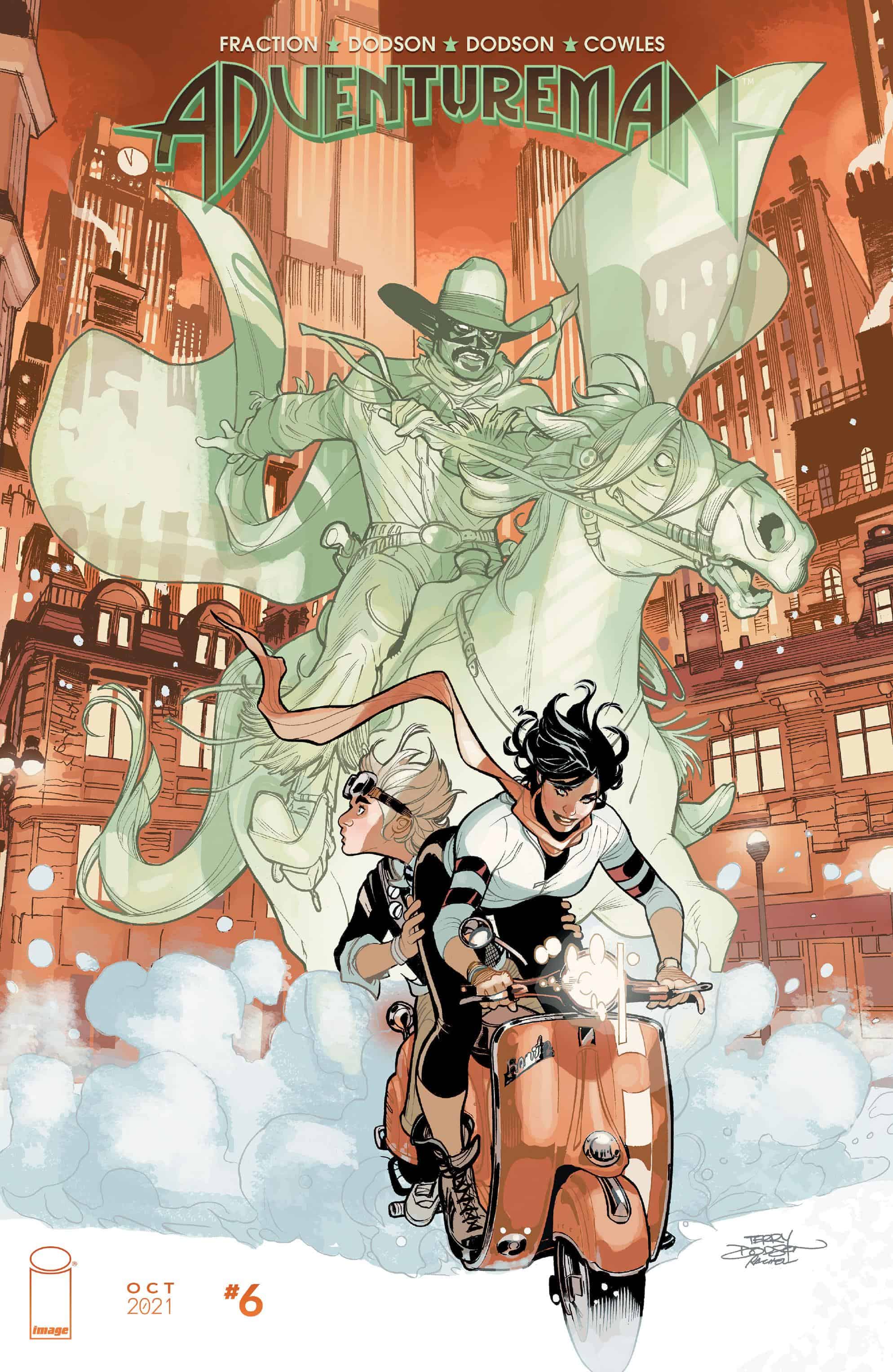 Claire Connell has become the new Adventureman, thus awakening a long-lost ally and rousing some long-gone ghosts from the Adventure Age that have unfinished business…

History and myth are always lurking beneath the surface of any and everywhere, no matter how many times the streets are paved, brick walls are knocked down or monuments are converted to soulless skyrise. History is always rumbling, waiting dormant until something clicks and it begins to trudge its way up like weeds in the concrete of a sprawling metropolis. A book that understands the weight of history, and is actively in dialogue with how those diametrically opposed forces operate around one another is the Image series Adventureman, written by Matt Fraction with art and color from Terry Dodson, inks by Rachel Dodson, and lettering from Clayton Clowes.

Fraction’s script moved at breakneck speeds, jumping from its introductory arc to a mostly self-contained story about another candidate for a pulp hero. There’s a connection between the original Adventureman and the Crossdraw Kid, a chance meeting in a time lost to the world. That tale of adventure is contrasted with coma patients and older residents of a local hospital waking up and starting to remember that lost time. It’s a wonderful blend of modern and traditional sensibilities and hints at the large plot unfolding in the pages of the modern story. Fraction’s secret superpower pleasure is the ability to mold a cavalcade of new and unique characters with multiple, massive ensembles coming together in various periods. It’s a cast so expansive and well rounded that if Fraction and the Dodsons’ wanted to, they could have their own imprint or line of pulpy heroes filling the local spinner racks of shops around the country.

Dodson’s art is as excellent as ever and continues to be a staple of the book, almost as if he was born to draw pulp heroes. The Dodsons’ style lends itself to that cinematic style, and it would be a gift to the world if Dodson decided to draw horses and mask gunfighters stopping criminals for another 100 issues. Dodson’s style, which is equal parts cinematic panels of action sequences and gorgeous pin-ups of cityscapes in the dead of winter, is a perfect representation of what makes the book so appealing. It’s equal parts the classic series of adventure from the pulp stories of the past, mixed with modern linework and style that Dodson, and especially brought by the other Dodson’s inks.

The issue’s coloring is the most interesting element, with greenish whites of spirits and the stark whites of Christmas in New York fluttering across its pages. Dodson creates strong distinctions between interior and exterior through his use of colors, with a warmer palette clashing against harsher tones as we’re led from the warmth of family bookstores to the cold, sterile environments of the hospitals. Every image moves in step with the color, and the two feed each other symbiotically, giving the sense of two worlds competing and feeding one another. As the book moves further from telling stories of the past and allows Claire to grow into her own, it’ll be interesting to see how Dodson continues to compose the action and images of the book, and how much the color influences those renderings.

Adventureman #6, and the series as a whole, is a meditation on how history pops its head into the modern world. Every stone in the path, every brick in the hall carries a story and tale, and those who are open to listening are the ones that have a greater understanding and power to operate in the world. That, more than superformulas or magic amulets, is the power that Fraction is channeling in his pulp heroes, and is conveyed in every image and panel that the Dodsons’ put to page.