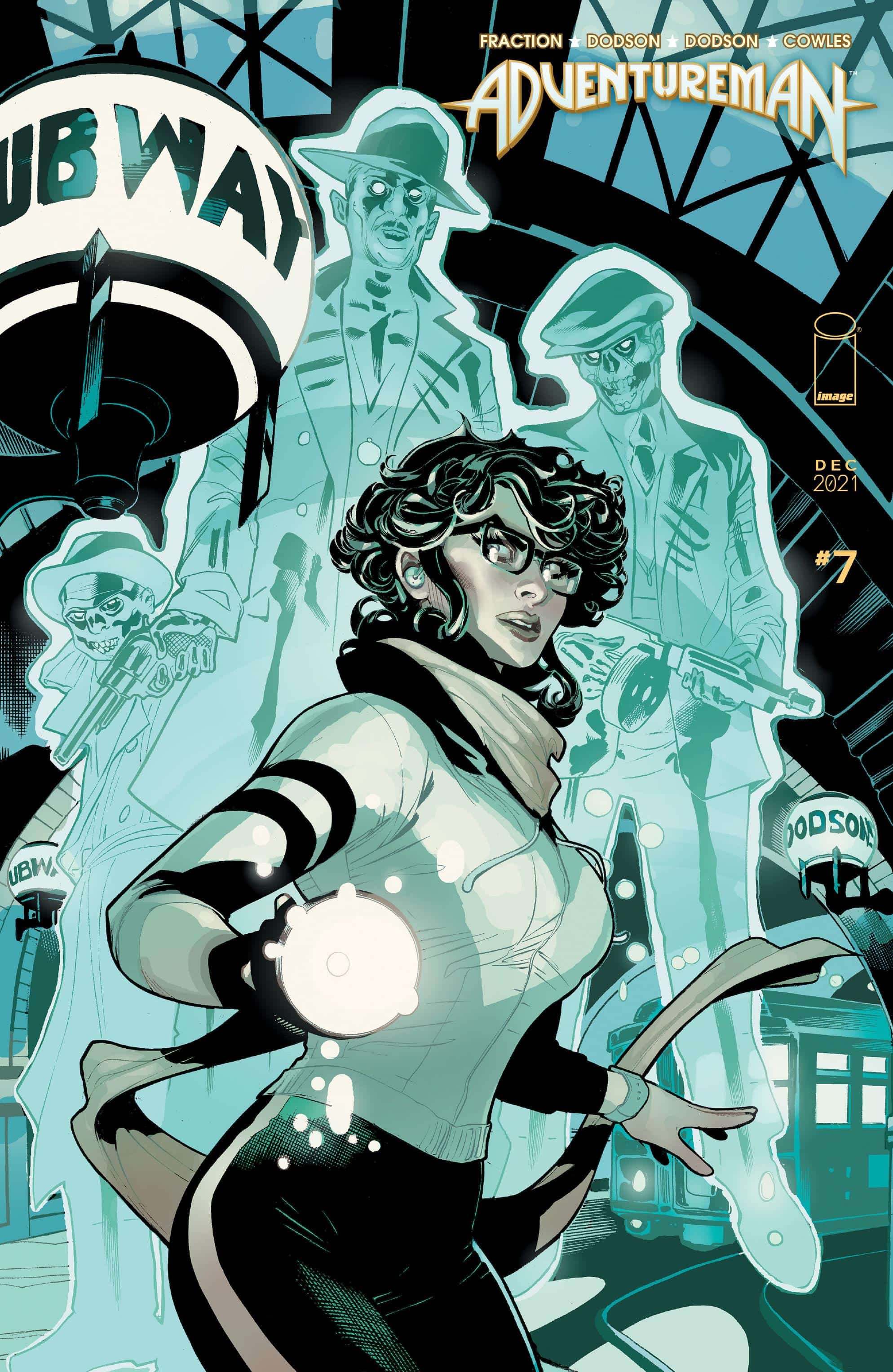 It’s fun to think about the span of pulp, which is more than just a genre, but a whole medium of its own. Adventureman, written by Matt Fraction and drawn/colored by Terry Dodson, with inks from Rachel Dodson and letters by Clayton Cowles, is a series that is interested in breaking down and experimenting with the medium, especially in the ways it meshes and combines with comic books. The series covers everything from action adventures, superheroics, the occult, and now in the pages of issue #7, the western. The book takes the subgenre of the weird west and runs with it, making total sense that the previous issues have led to this hybrid of genre and style.

Fraction doesn’t take his foot off the gas, as the issue barrels through the mystery of ghosts in the subway stations of New York, the Connell family trying to recreate the Adventureman formula and the unraveling of the secret history of the Crossdraw Kid from the Age of Adventure. The book jumps between these three plotlines, smartly never stopping to linger in any of the specific beats. There’s confidence in the multitude of characters Fraction presents to the audience, knowing that in another world, they could be the headline of their own series.

It’s a similar rhythm that was established in the book’s first arc, and there’s something interesting working below the surface by using a character outside of the protagonist to be a window into this world. It makes the exposition of the book feel almost non-existent and tells the audience everything they need to know through action and choice, rather than dialogue. Fraction is giving parts of the story and is successfully capturing the feeling of a pulp story, which always feels like a piece of a larger whole, even more so than a typical modern comic.

Dodson’s art continues to be breathtaking, somehow one-upping the previous issue’s thrilling retro car/horse chase. The artist’s style fits perfectly for cover work, and a lesser artist would struggle to jump between the spectrum of characters and genres. It’s the quality of Dodson’s art that makes it perfect for covers of pulpy novels on the racks of bookstores that set the series apart and translates to the sequential page. A lot of the movement, dynamism, and flow of the book come from Dodson’s colors, which build a language of continuity and action for the series. This is made abundantly clear in the best scene of the book, an almost full splash of the damaged station filled with spectral figures lingering in a damaged subway station. It’s a page that deserves to be a poster hanging in the window of a comic shop, or a framed pin-up. Dodson uses the blues and whites of the page to play with the scene’s light source, blending the beam from Claire’s flashlight with something ethereal (stream, ectoplasm?) that makes a clear division between the land of the living with the phantasms of New York.

The splash could be on its own the wrap-around cover to a trash occult novel about spooky ghouls in the subway, but it’s that use of light and colors that add the sense of story unfolding. It’s less of a snapshot, which is what covers usually delineate, and instead highlights a specific beat of a mystery that propels the audience into its third act. The composition of the splash is mirrored on the last page of the issue, but changes the lighting and color and makes the image feel entirely new and original. It’s a perfect example of sequential storytelling and is proof that Dodson is one of the titans of this era.

Adventureman #7 is a book excited by its influences and canon. It takes the medium of pulp stories and builds something that fulfills the fun of the style but works on a deeper level than most other types of pulp. Paired with Dodson's stylized art and colors, which on the surface feel like classic pin-ups but burrows into a deep well of sequential storytelling. The writing and artwork on a level beyond mindless pulp, and examines how stories and genre work together, and the power of history influences the way a tale is told. The book also makes the case for more weird west stories, and hopefully, there might be a place in the comics’ market for a Crossdraw Kid series.